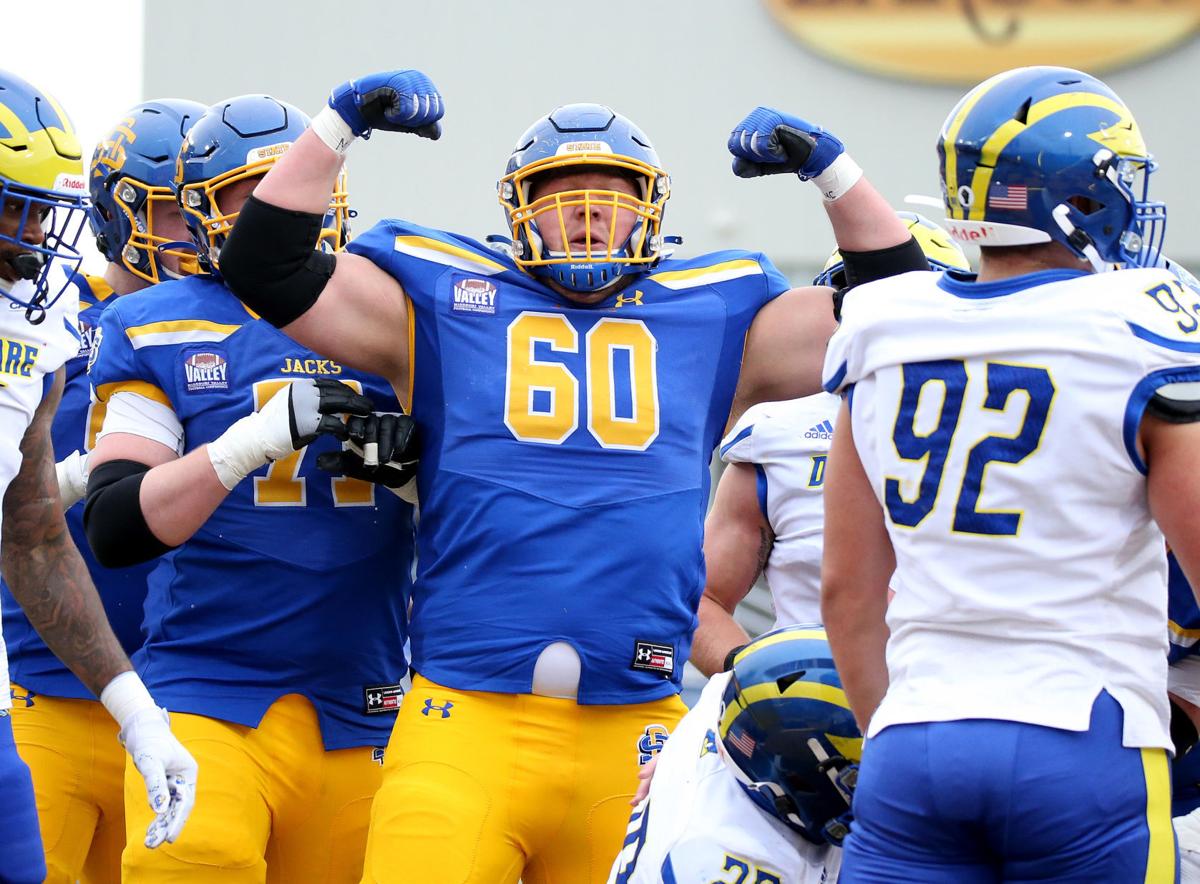 Offensive lineman Mason McCormick, 60, of the South Dakota State Jackrabbits flexes his muscles showing their strength against the Delaware Fightin Blue Hens on May 8 in Brookings. 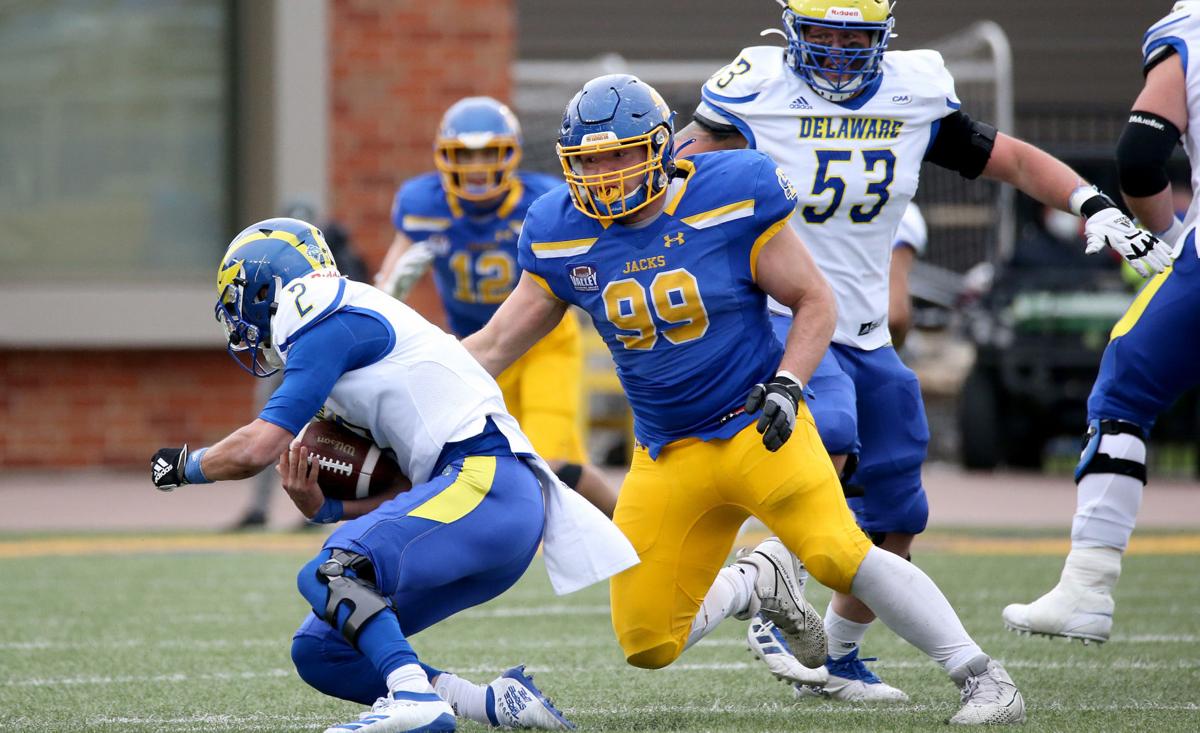 Caleb Sanders, 99, of South Dakota State bears down on quarterback Nolan Henderson of the Delaware Fightin Blue Hens on May 8 in Brookings, South Dakota.

The third time was definitely the charm.

After a pair of losses in its first two national semifinal appearances in 2017 and 2018, the South Dakota State University football team will play for a Football Championship Subdivision national title for the first time following a 33-3 victory over Delaware Saturday at Dana J. Dykhouse Stadium.

The top-seeded Jackrabbits, who improved to 8-1 overall and ran their winning streak to seven games, matched a program playoff record with seven sacks and put together a big second quarter offensively to move on to Frisco, Texas, for next Sunday's title tilt against second-seeded Sam Houston State. Kickoff is set for 12 p.m. (MDT)at Toyota Stadium, with television coverage on ABC.

Delaware put the first and its only points on the board with a methodical drive late in the first quarter. The Blue Hens converted three times on third down before settling for a 29-yard field goal by Ryan Coe that capped a 15-play, 54-yard drive that chewed up more than half the opening stanza.

SDSU responded with a 41-yard return on the ensuing kickoff by Jordan Meachum and the Jackrabbits grabbed the lead moments later on a 30-yard touchdown pass from Mark Gronowski to Jaxon Janke.

From there, the Jackrabbits unleashed a relentless defense and a quick-strike offense in the second half that quickly put the game out of reach. SDSU dug deep into the playbook on its first drive of the second half, scoring a touchdown on a throw-back halfback pass from Pierre Strong, Jr. to Gronowski that covered 24 yards.

After notching a pair of sacks on the next Delaware possession, SDSU built its lead to 20-3 with a short touchdown drive set up by a 55-yard punt return to the Delaware 27 by Jaxon Janke. Strong plunged in from 3 yards out for the score, but the extra point was missed.

SDSU added to its lead in the closing minutes of the half after blocking a 53-yard field goal attempt. Gronowski and Janke hooked up for 13 yards on third down to move the ball across midfield, with Gronowski later finding Blake Kunz in the right corner of the end zone for a 14-yard touchdown with 21 seconds remaining in the half.

Cole Frahm kicked field goals of 41 and 22 yards in the second half for the lone points in the final 30 minutes as the Jackrabbit defense came up big time after time. SDSU finished with 12 tackles for loss in the game, with defensive end Reece Winkelman notching 2.5 sacks among his 3.5 TFLs. Caleb Sanders added a pair of sacks.

The Jackrabbits held a 354-216 advantage in total offense, despite with SDSU rushing for 168 yards and throwing for 186. Strong led the ground game with 73 yards on 14 carries, with Isaiah Davis adding 70 yard on nine attempts. Gronowski completed 10-of-16 passes for 162 yards, with Janke totaling 64 yards on three catches.

Delaware quarterback Nolan Henderson, who returned after being shaken up on the Blue Hens' first-quarter scoring drive, was an efficient 18-of-21 passing for 142 yards. Gene Coleman II led the receiving corps with six catches for 43 yards.

The Blue Hens were limited to 68 net yards rushing, with Khory Spruill leading the team with only 16 yards on six carries. The SDSU defense held CAA Offensive Player of the Year Dejoun Lee to a mere nine yards on 11 carries.

HUNTSVILLE, Texas — Jequez Ezzard's catch-and-run for a touchdown and punt return for a score were among two of three touchdowns Sam Houston State scored in the last 2 1/2 minutes of the third quarter en route to a 38-35 comeback win against James Madison on Saturday.

"At no point I thought we would lose," Bearkats coach K.C. Keeler said in an interview after the game.

Second-seeded Sam Houston State (9-0) advances to the FCS title game to face No. 1-seed South Dakota State (8-1) on Sunday in Frisco, Texas. The Jackrabbits dismantled Delaware 33-3 earlier Saturday. It's the Bearkats' first trip to the title game since losing in 2012 to North Dakota State.

James Madison led 24-3 at halftime and were up 27-10 with three minutes left in the third before Ezzard struck.

Eric Schmid threw a slant to Ezzard who caught the ball about 14 yards into his route and he took it the rest of the way for a 69-yard touchdown reducing the deficit to 27-17.

After forcing James Madison to three-and-out, Ezzard ran back a punt 80 yards to cut the lead to three. Zyon McCollum then picked off Cole Johnson after his pass bounced off the hands of his intended receiver on the Dukes' first play of the drive.

Schmid ran it in from 20 yards out as time expired to end the third quarter for a 31-27 Sam Houston State lead it never gave back.

Johnson threw for 271 yards and three touchdowns for James Madison.

Offensive lineman Mason McCormick, 60, of the South Dakota State Jackrabbits flexes his muscles showing their strength against the Delaware Fightin Blue Hens on May 8 in Brookings.

Caleb Sanders, 99, of South Dakota State bears down on quarterback Nolan Henderson of the Delaware Fightin Blue Hens on May 8 in Brookings, South Dakota.