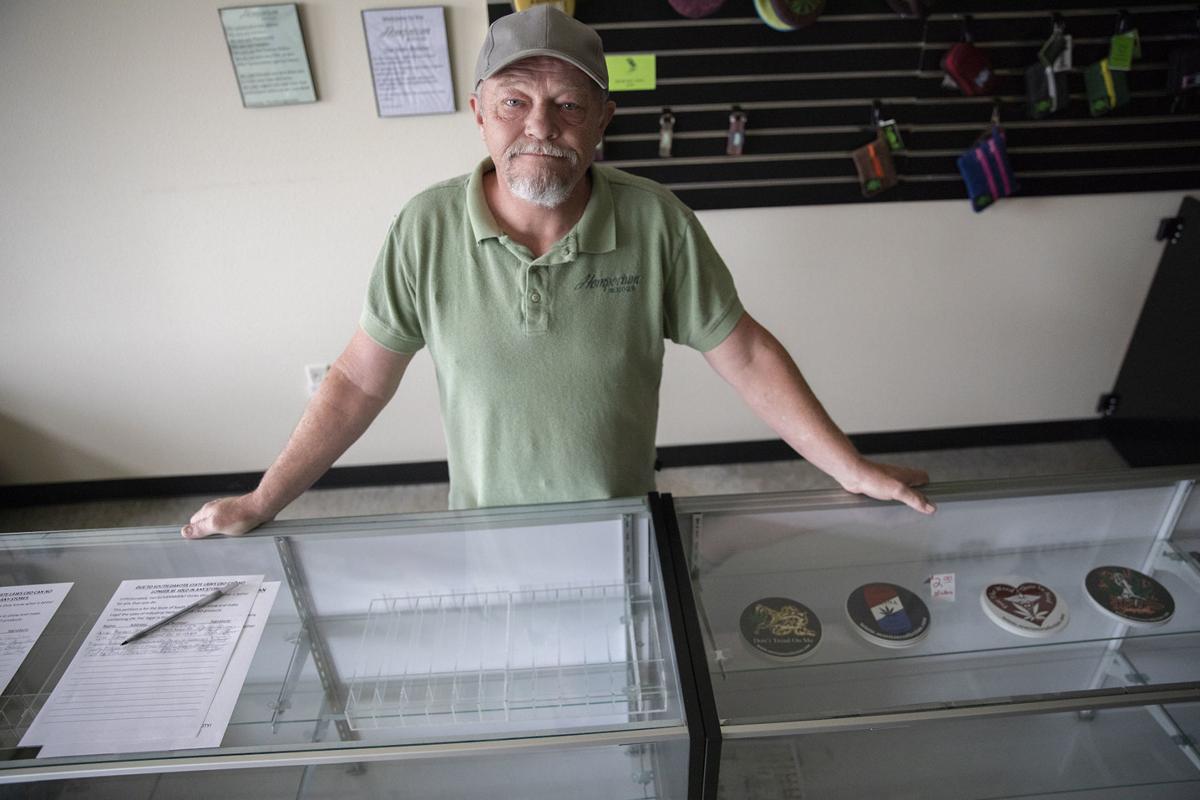 Leonard Vandermate, owner of the Hemporium Boutique, poses for a portrait Wednesday in front of a near empty display case at his Rapid City store. He removed CBD products after local law enforcement officials told him this week he was violating state law. 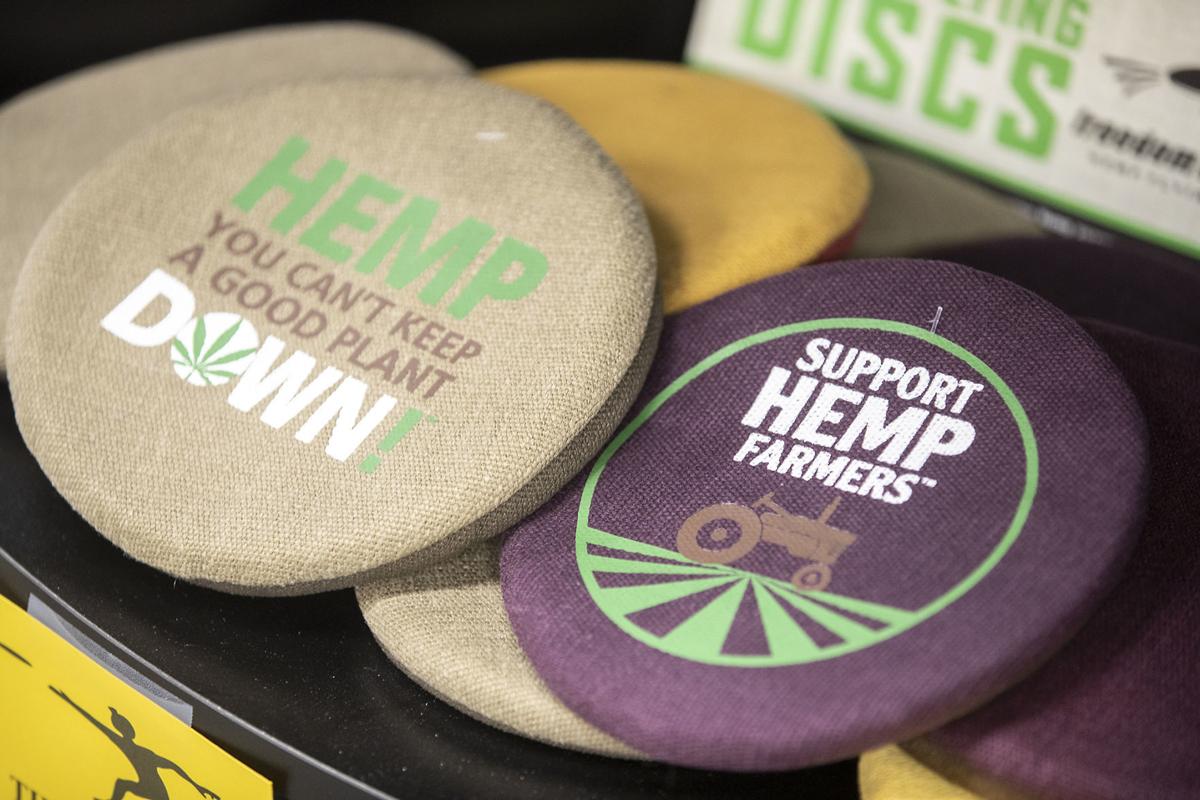 Vandermate continues to sell other products made from hemp, including flying disks. 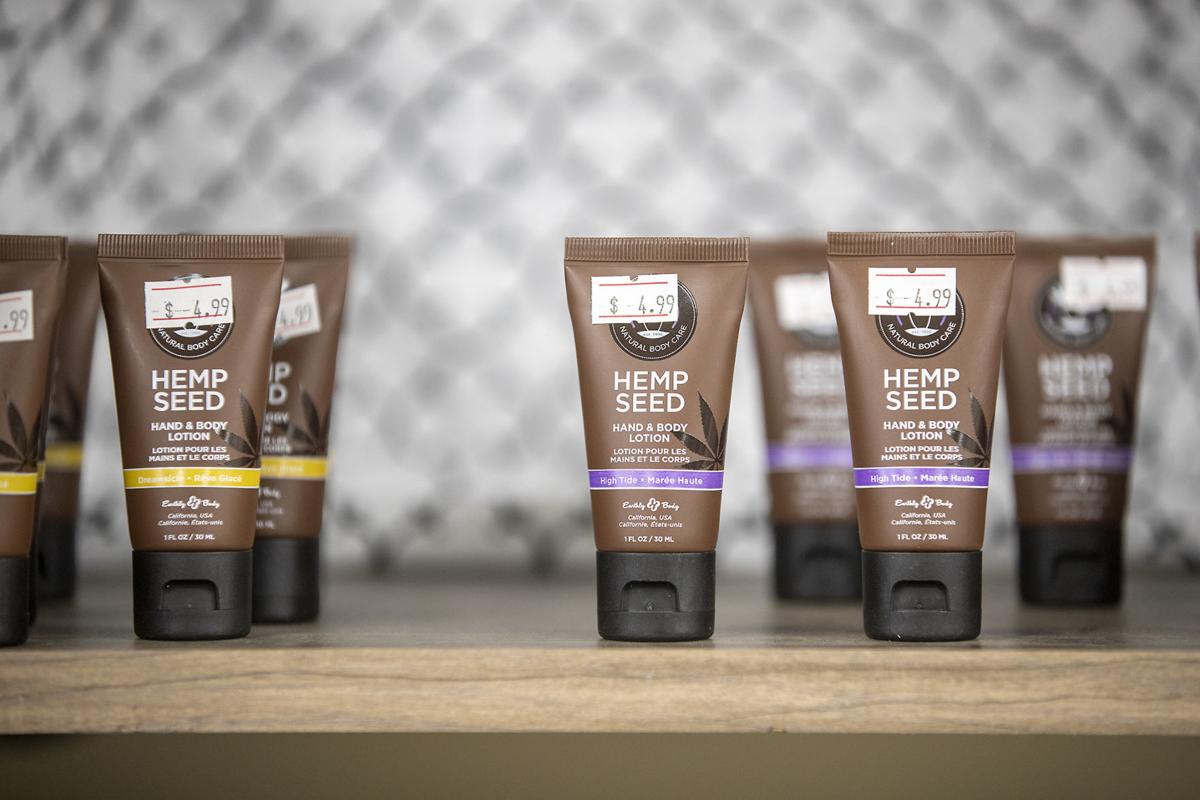 Hemp seed lotions remain for sale at the Hemporium Boutique. 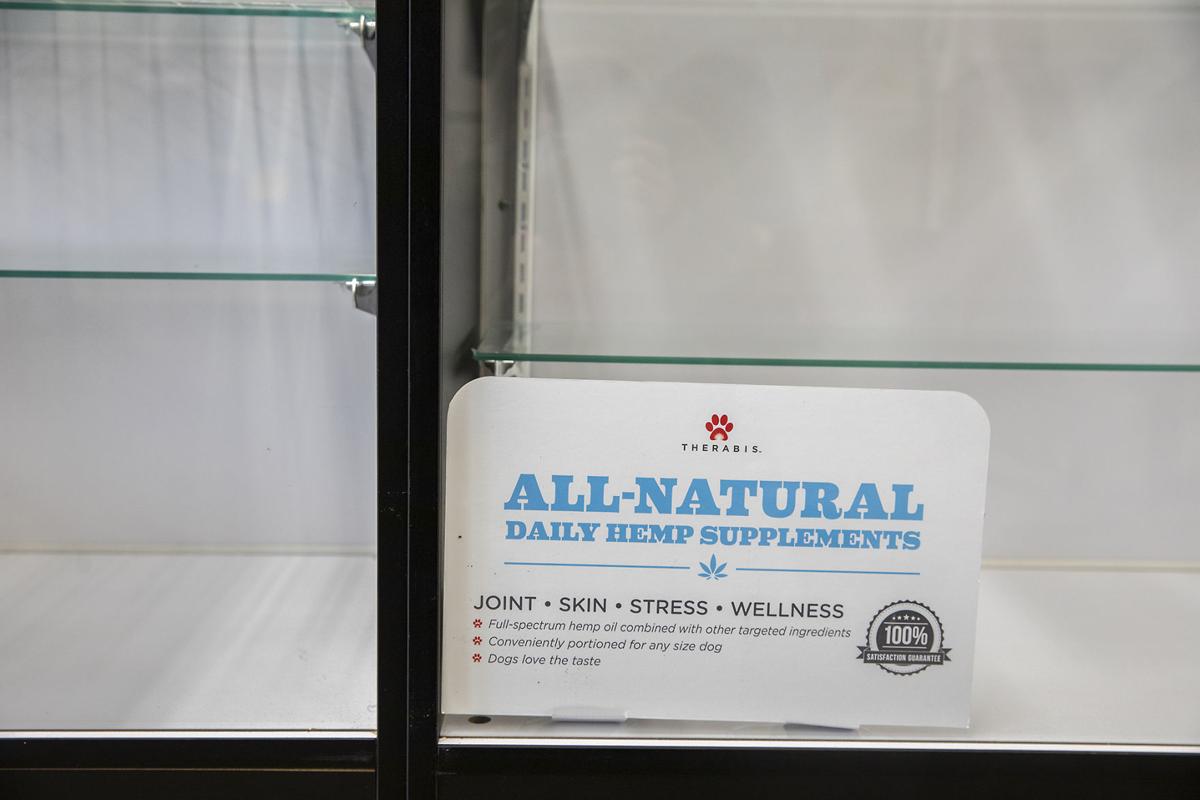 A case where CBD products were once displayed is empty Wednesday at the Hemporium Boutique. 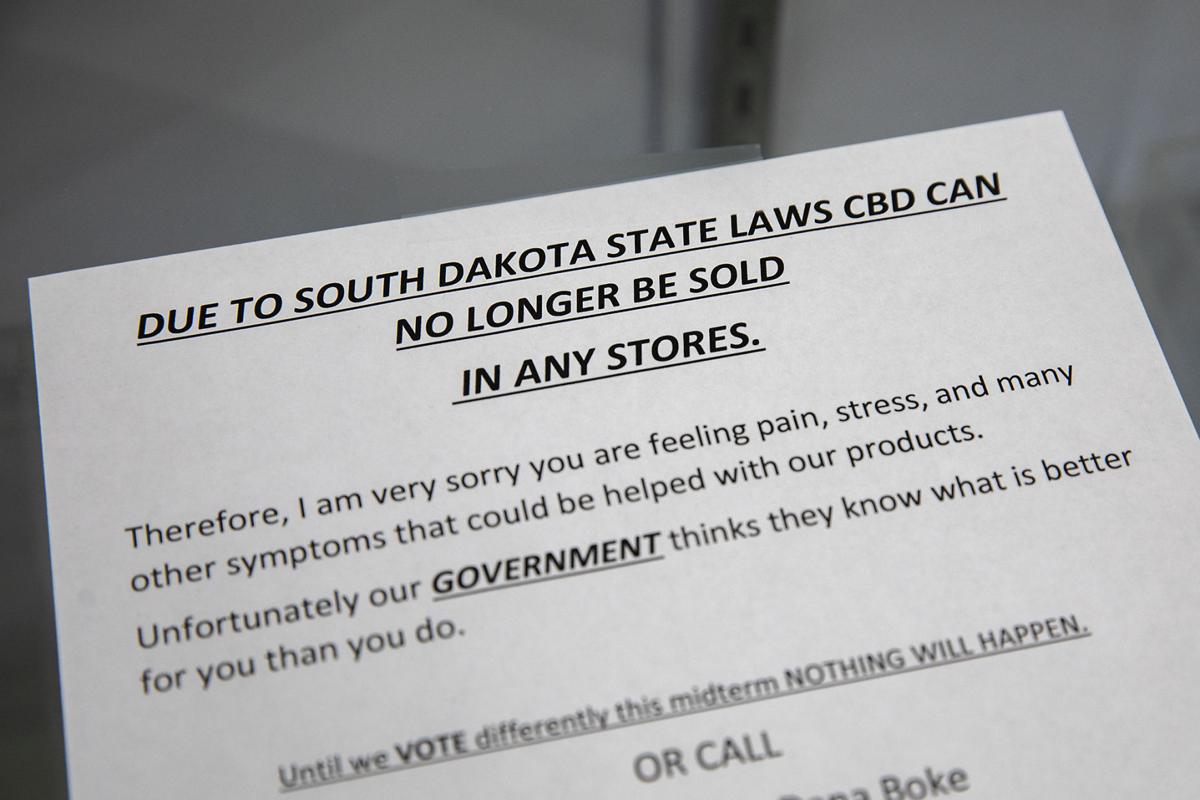 A sign on the counter at the Hemporium Boutique explains the shop is not allowed to sell CBD products.

The Hemporium Boutique has pulled all hemp oils from its shelves — roughly half its business, says the owner — after law enforcement issued an ultimatum to stop selling the products.

"They came in the door yesterday morning to our Rapid City store and knew exactly what they were doing," store owner Leonard Vandermate said Wednesday.

Vandermate said he then proceeded on Tuesday to pull the various products comprised of an extract of the cannabis plant called cannabidiol, or CBD, from both his Rapid City and Spearfish stores. CBD oils are hemp extracts used as chronic pain relievers, for people and pets but are not psychoactive. Hemporium Boutique, until Tuesday morning, sold products from Green Roads, a leading manufacturer of CBD oils, edibles and topical creams.

But they’re also against the law in South Dakota. Detectives with a drug task force comprising state, county and city agents approached Vandermate's wife, Lisa, at the store at 544 Century Road in northeast Rapid City and informed her the store had 24 hours to remove the products.

"We told them about the state law and asked that they stop," Rapid City Police Assistant Chief Don Hedrick said Wednesday.

Vandermate said that as detectives left his store one commented, "We're going to tick off a lot of people in Rapid City."

By Wednesday morning, he was hearing from his customers upset to hear the news.

"I had a lady in here crying," said Vandermate, who described a frantic morning, answering phone calls and inquiries from around the state.

One of his customers,he said, is a woman with Stage 4 breast cancer who had an informal referral from a Mayo Clinic doctor to purchase CBD products from Vandermate’s store. “These people are going to go back to abusing alcohol or opioids or the crap we’re trying to get rid of to deal with this pain,” he said.

A 2017 state law effectively legalized CBD products that received FDA approval. In June, the FDA approved Epidiolex, a non-intoxicating compound, for treating two types of epilepsy. However, CBD is still listed as a Schedule IV drug in South Dakota.

The web of drug laws between states and federal jurisdictions can be confusing. In October 2017, a Rapid City attorney, in a letter provided by Vandermate to the Journal that was sent as he prepared to open his business, acknowledged the legal ambiguity surrounding the sale of hemp products.

"Based on these statutes and regulations the controlling question is whether your products are made with the exempt parts of the cannabis plant," wrote Jordan Bordewyk of Anker Law Group in Rapid City.

Later in the letter, the attorney said, "You should apply heightened scrutiny to any CBD products as law enforcement may take the position that any product containing significant amounts of CBD inherently had to have come from non-exempt parts of the cannabis plant."

Assistant Police Chief Hedrick said police received a citizen's complaint that the retailer was selling CBD oils and that is why law enforcement targeted the Hemporium Boutique.

State law, both Hedrick and a spokeswoman for the Pennington County Sheriff's Office said, is unambiguous. Selling CBD products is a Class 6 felony, punishable by up to two years in prison, a $4,000 fine, or both. Hedrick, however, said he does not see charges being pressed as long as the store complies with state law.

Within the last few months, Hedrick said the Unified Narcotics Enforcement Team — comprising the Rapid City Police Department, the Pennington County Sheriff's Office and the attorney general's Division of Criminal Investigation — had spread the message to local retailers about the illegality of hemp oils.

In 2014, the farm bill passed by Congress established a program by which states could allow hemp farming when conducted as a pilot or research project in conjunction with an institution of higher learning, so long as hemp is legalized in the state. But hemp remains outlawed in South Dakota.

Vandermate, who says other stores across the state sell hemp oils, said the state law is unjust and that it could effectively close his business and others like his that collect sales tax revenue for the state.

"They're complaining about budgets, but jiminy christmas, people better get ready to tighten their belts if they shut down every business in South Dakota that sells CBD products," he said.

Vandermate said he may need to shutter one of his locations and lay off employees. He said he had projected doing more than $250,000 in retail in the next year and estimated approximately 300 retailers, from pet stores to homeopathic care providers, sell products containing the medicinal hemp extract.

On Wednesday afternoon, Hemporium Boutique was still open in Rapid City, selling a line of hemp-hewn backpacks and T-shirts, hair treatments, cacao hemp seed butter and briefs. One sign read, “Hippies Use Side Door” and another was a petition with at least a dozen signatures already asking for the Legislature to legalize hemp.

“They (law enforcement) didn’t solve anything here,” Vandermate said. “They simply just moved it. My customers can just go someplace else or on the internet to purchase these products.”

The 2018 Farm Bill, pending passage as it’s currently written, would remove hemp from the designated schedule of controlled substances and categorize it as an agricultural commodity, seemingly legalizing the sale of CBD oils in South Dakota and other states.

“There’s such a gray area,” Vandermate said. “Half the people say it’s OK. The other half says no. Some say yes. Does state law trump federal? Or the other way around? It’s just confusing.”

Leonard Vandermate, owner of the Hemporium Boutique, poses for a portrait Wednesday in front of a near empty display case at his Rapid City store. He removed CBD products after local law enforcement officials told him this week he was violating state law.

Vandermate continues to sell other products made from hemp, including flying disks.

Hemp seed lotions remain for sale at the Hemporium Boutique.

A case where CBD products were once displayed is empty Wednesday at the Hemporium Boutique.

A sign on the counter at the Hemporium Boutique explains the shop is not allowed to sell CBD products.