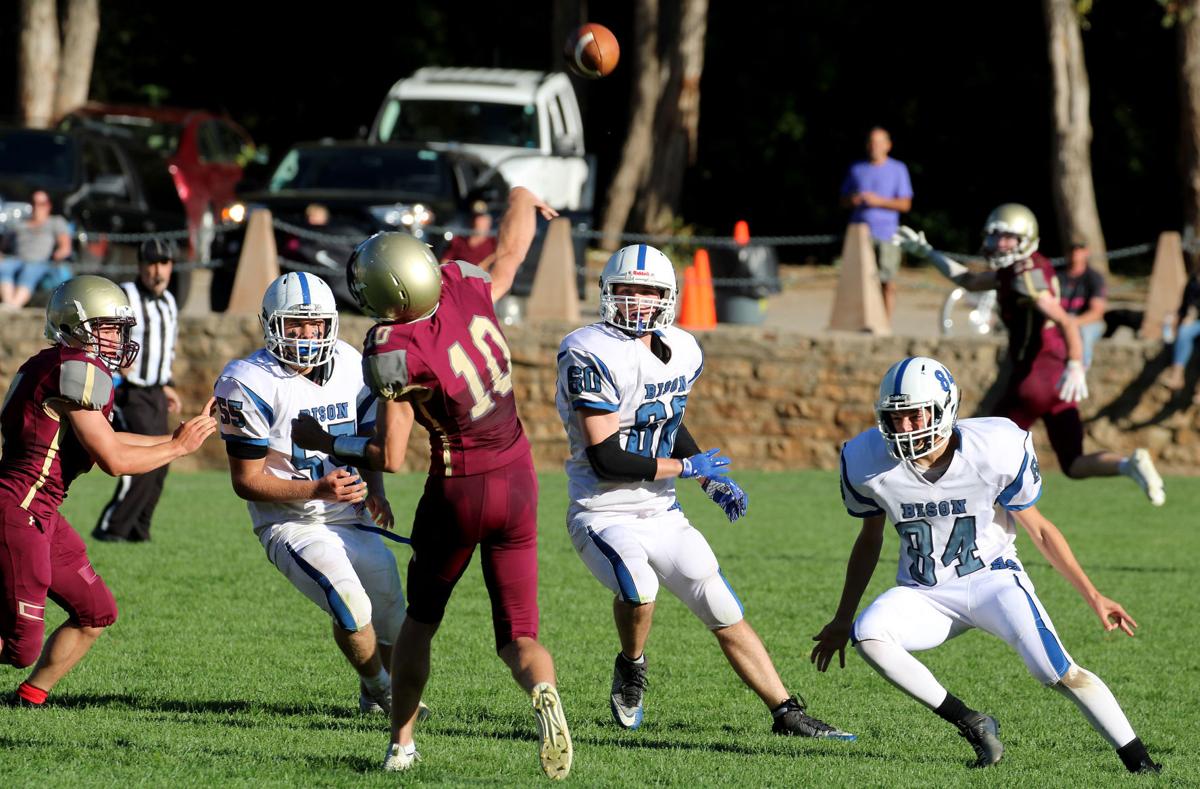 Lead-Deadwood quarterback Rocke Rainey lets a deep ball fly as receiver T.K. Rainey breaks open over the middle on a post route Saturday against Hot springs. The pass went for 54 yards and the only score of the game. 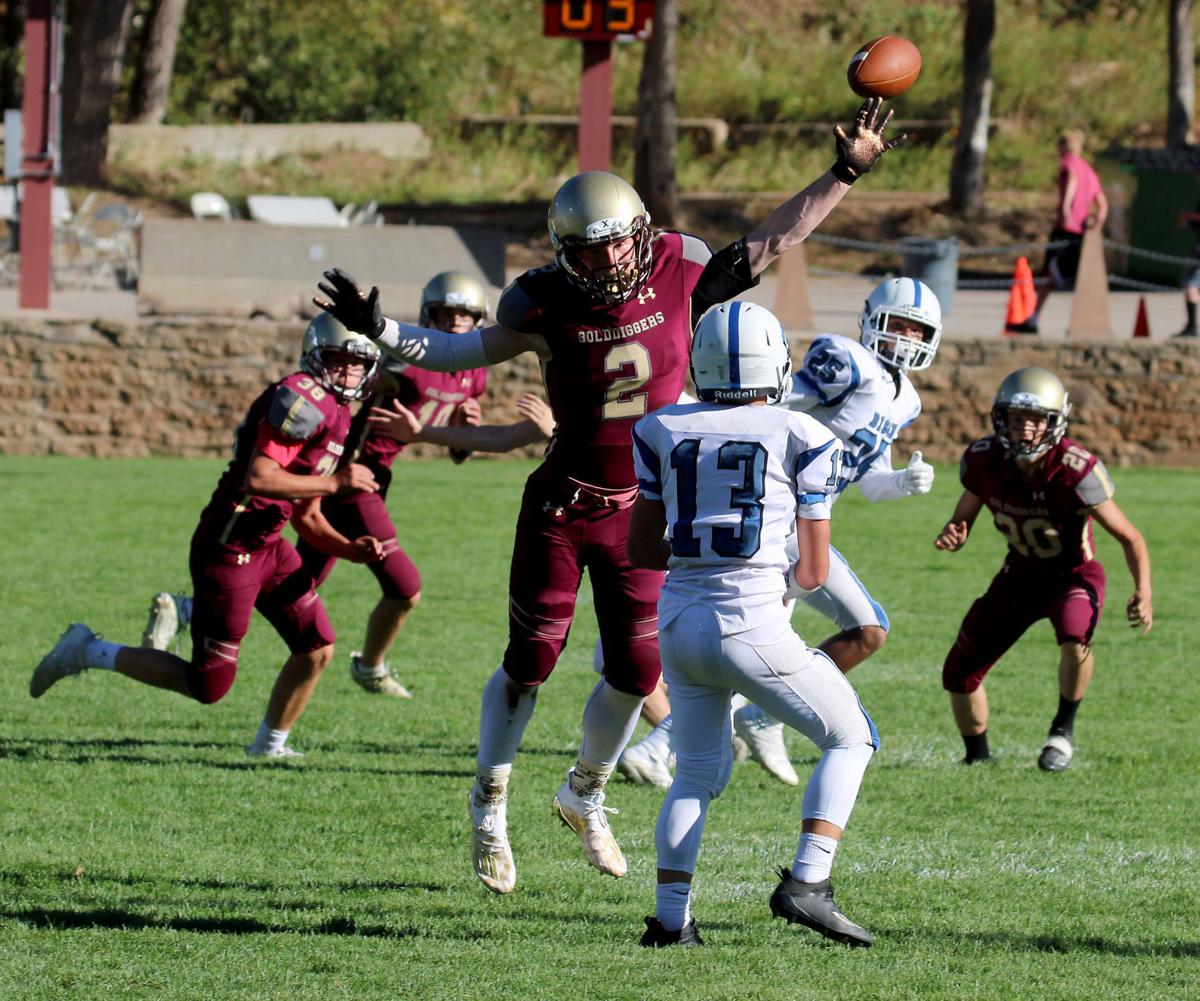 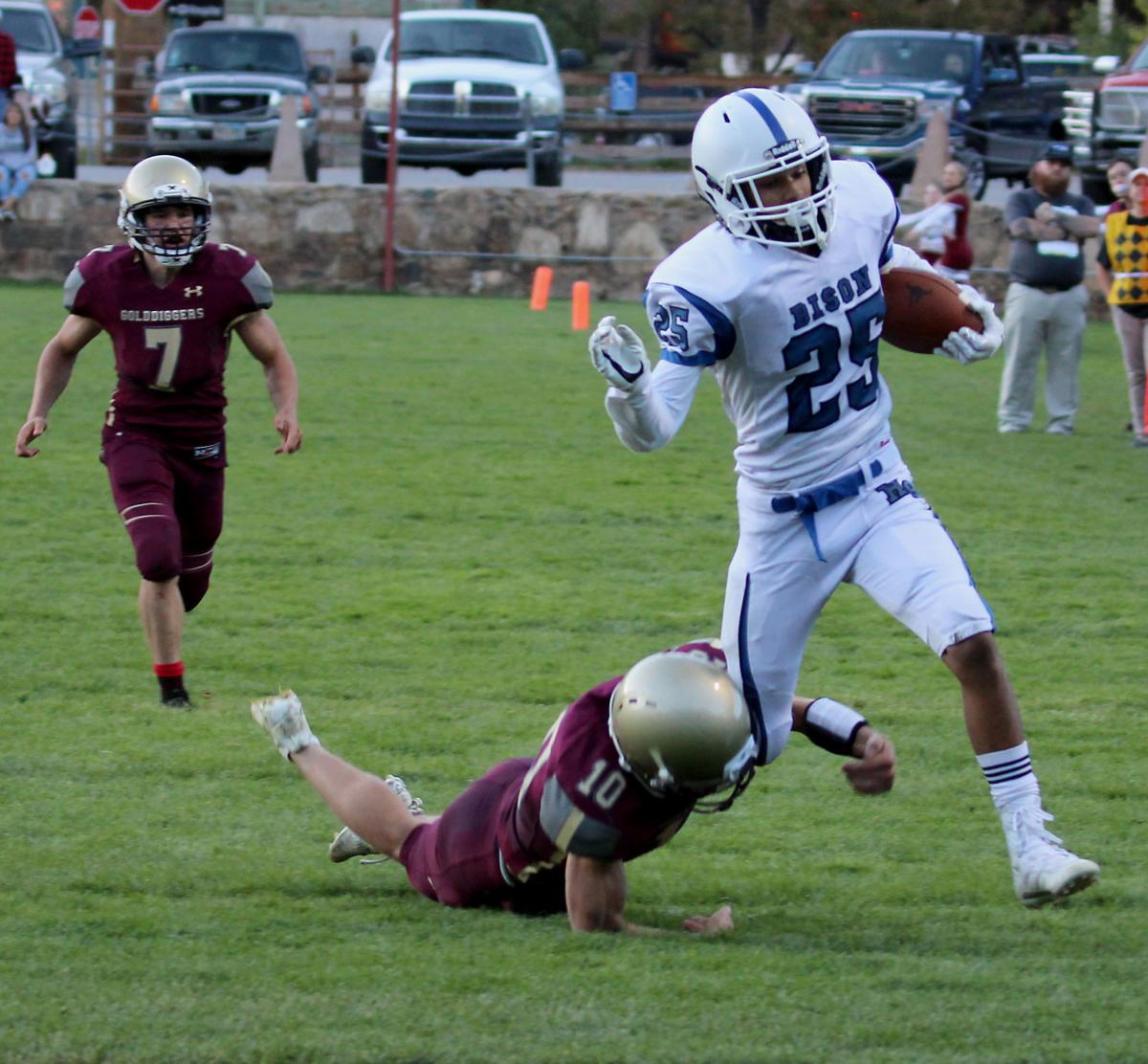 Rocke Rainey makes a game-saving tackle for Lead-Deadwood as Hot Springs receiver Garrett Rhoe made a grab on a slant route and got loose in the defensive backfield Saturday in Deadwood.

In the final two minutes of the first half on third-and-9, Lead-Deadwood quarterback Rocke Rainey took a snap and launched the football toward a downfield receiver.

Misplayed by a Hot Springs defensive back, T.K. Rainey hauled in the pass and ran untouched into the end zone for a 56-yard touchdown to put the Golddiggers ahead.

It wound up being the only points either team could muster as both squads stayed staunch on defense. The Bison got its offense in the red zone on its final two drives, but Lead-Deadwood made clutch stops on fourth down both times to preserve its lead and secure a 6-0 victory.

“It was something where we knew we had a little bit of speed. They were playing the run hard, and we just needed to get one guy past and get enough time,” Golddiggers head coach Tom Tieszen said. “Our linemen and our running backs did a great job of blocking, and T.K. had a great route and made a great reception.”

Rocke Rainey finished 4 of 10 passing for 69 yards and ran for another 28 yards on five carries. Charlie Hanel earned 33 yards on the ground off 11 carries and caught two passes for Lead-Deadwood (1-3).

Preston Iverson picked up 24 yards on 3 of 5 passing for Hot Springs (1-2) and added 24 rushing yards before leaving the game with an injury in the first half. Running back Landon Iverson came in under center and completed 4 of 12 pass attempts for 94 yards and two interceptions, and ran for 21 yards off 10 carries. Trace Deboer also collected three receptions for 61 yards.

“We couldn’t stop their blitzes. Once we got that figured out, we were at least able to move the ball a little bit,” Bison head coach Ben Kramer said. “I’m proud of the kids. They didn’t quit on us. They played as hard as they could. We had a couple opportunities to score there, but we just had a lot of young kids on the field.”

On the first play from scrimmage in the opening quarter, Hot Springs fumbled and turned the ball over to Lead-Deadwood at its own 35. A rushing loss and a fumbled snap, however, forced the Golddiggers to punt. The Bison were able to get two first downs on its next possession but were stopped at its own 42 and also punted.

A 29-yard run by Hanel moved Lead-Deadwood into the red zone midway through the first frame, but Hanel was then dragged down on fourth-and-3 from 12 for a turnover on downs.

The two teams then traded punts until Rocke Rainey’s touchdown connection to T.K. Rainey, which came with 1:20 to play in the second quarter and capped off a seven-play, 68-yard drive.

The Golddiggers followed up their score with a successful onside kick, but a loss on first down, a recovered fumble and a sack ended their effort to add to their lead before halftime.

After forcing a punt on the first drive of the second half, Hot Springs took over on offense at its own 31-yard line and moved the ball to the opposing 23 before Matt Close, who also went down with an injury, was sacked by Jack Hallock on fourth-and-5.

Lead-Deadwood executed a fake punt on its next possession, on fourth-and-7 from the opposing 49, but a holding penalty moved the ball back and the Golddiggers punted again.

The Bison started the fourth quarter by throwing an interception but immediately got the ball back when they recovered a Lead-Deadwood fumble on the ensuing first-down play. Aided by a 38-yard pass completion from Iverson to Deboer, they reached the 14 ahead of a fourth-and-1 with 6:28 to play. They were then penalized for a false start, and their fourth-down pass attempt into the end zone drew contact between the intended target and the defensive back, but didn’t draw a flag.

“We just simplified everything for Landon, and gave him some easy routes to look at," Kramer said. "We were able to connect on some of our short stuff and mix in a little run out there too, we just couldn’t punch it in.”

Hot Springs managed to force another punt, and took over on offense one final time with 2:42 left in regulation at its own 39. On first down, Iverson found Garrett Rhoe for a 50-yard reception to reach the 11. After an offside penalty called on the Golddiggers, their sixth of the game, moved the ball to the 6 for a fourth-and-5, Iverson was taken down trying to escape the pocket to seal the win for Lead-Deadwood.

“Our defense has been a bright spot all year,” Tieszen said. “They’ve been playing very well, even against the tough teams that we’ve played. We’ve actually, in games, have had a lot of practice stopping teams in the red zone and had a lot of success.”

The Golddiggers will be back in action Sept. 25, hosting Chamberlain, while the Bison take on Belle Fourche Friday on the road.

Lead-Deadwood quarterback Rocke Rainey lets a deep ball fly as receiver T.K. Rainey breaks open over the middle on a post route Saturday against Hot springs. The pass went for 54 yards and the only score of the game.

Rocke Rainey makes a game-saving tackle for Lead-Deadwood as Hot Springs receiver Garrett Rhoe made a grab on a slant route and got loose in the defensive backfield Saturday in Deadwood.