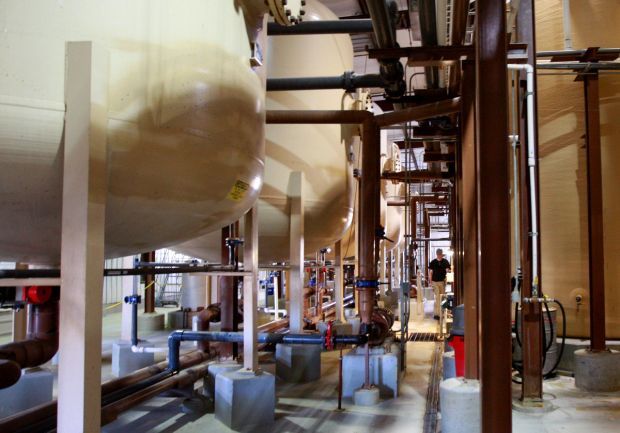 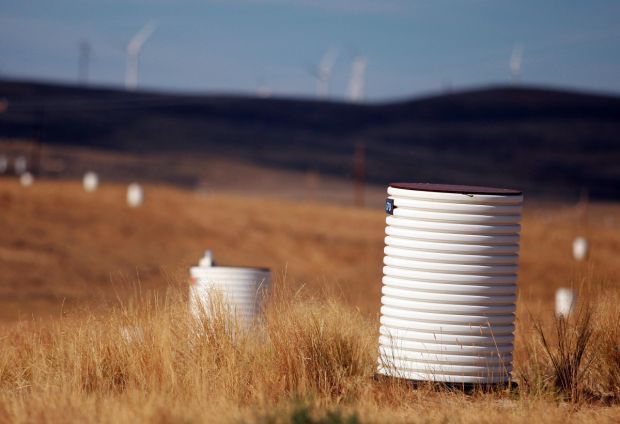 Injection and production wells are covered by plastic and metal housings Friday, Aug. 31, 2012 at Cameco's Smith Ranch-Highland uranium operation near Glenrock, Wyo. Smith Ranch-Highland utilizes in-situ recovery, a process by which water-based mining fluid is pumped into an ore-bearing aquifer to dissolve the uranium. It is the largest uranium production facility in the U.S. 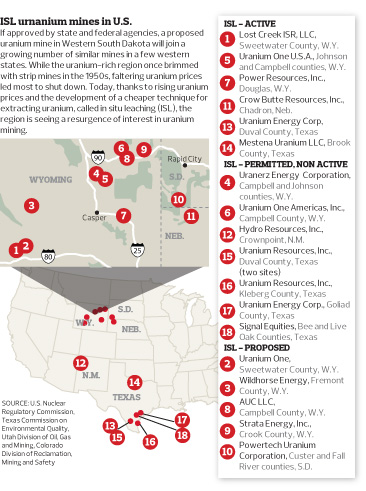 ISL uranium mines in the U.S.

Powertech, a Canadian company that is proposing to begin mining uranium near Edgemont, has worked for years to reassure South Dakotans that its mine will not only be environmentally friendly, but that there are plenty of other mines across the country to prove that safety record.

But a closer look shows that hasn't always been true.

In the run-up to today's state permitting hearing in Rapid City, the Journal compiled a list of some of the worst environmental issues at in situ leach uranium mines across the country. The data was collected from newspaper clippings, state records, federal records, and academic reports published over the past 40 years.

The Journal sent its list to Powertech last week and asked how the company would prevent incidents that occurred at other mines. The company responded with an 8-page letter describing the mine's safety features, mitigation procedures, and how its operation would be regulated. The company also noted that the Journal didn't provide sourcing to its list and therefore it was unable to verify all of the listed problems.

Because Powertech's response was too long for print publication, the Journal has published it online. The Journal has also provided links to documents that formed the basis of its list.

Below is a look at those incidents, listed by mine name, the mine's location, the company involved, and what happened:

• Willow Creek mine, Johnson & Campbell Counties, Wyo. (Uranium One): An active mine that has operated under different companies since the late 1970s. Today it is divided between two sites: the Irigaray plant and the Christensen Ranch satellite facility. When the operation was under the ownership of Wyoming Mineral Corporation in the late 1970s and early 1980s, the state found the Irigaray site experienced repeated fires, migrations of injection solution in groundwater, and that basic tests were also not being performed.

In 2011, the state issued a violation after it was discovered that 7,000 to 10,000 gallons of sodium chloride brine was released into a dry ephemeral stream at the Irigaray site. The company took two weeks to notify the state, when notification should have occurred in 24 hours. In 2010, the state found problems with contaminants migrating through groundwater from the Christensen Ranch site. Glenn Mooney, a geologist for the Wyoming Department of Environmental Quality, sent a letter to the company and noted that uranium levels were "over 70 times" the maximum contaminate threshold in groundwater near the mine's permit boundary. Mooney wrote that the finding "is a major concern to WDEQ". In 2011, the state issued a violation after discovering the company was failing to properly conduct groundwater tests.

The largest leak contaminated groundwater for a year before it was found and repaired. The state also found the company was improperly storing radioactive material. In 1977, the state tried to fine the company and eventually reached an out-of-court settlement of $42,500. After retiring the mine, the company struggled to return the groundwater to its pre-mine chemical composition. The company, like many other in situ mining operators in Texas, requested that the state lower its restoration standards.

• Clay West and Burns mines, George West, Texas (U.S. Steel): A pair of now decommissioned mines that were run by U.S. Steel from 1975. The state found workers were frequently exposed to unsafe levels of radiation. An inspection in 1980 found gamma radiation levels were so high they "pegged the meter" due to problems containing uranium dust in the plant loading area. The company would later discover that uranium fluid was leaking into the ground, saturating the soil around the plant, and coating its drainage field and septic tank in uranium. In 1985, the state discovered that workers for three companies in Corpus Christi were exposed to unsafe levels of radiation while repairing a machine for the company. Overall, due to pipe ruptures, the company reported more than 22 surface spills at the site, releasing an estimated 1,199,647 gallons of radioactive and toxic chemicals.

• Mt. Lucas mine, Dinero, Texas (Everest Exploration): A now decommissioned mine run by Everest Exploration. The company was given permission to dispose of untreated radioactive wastewater by Lake Corpus Christi. Between 1984 and 1986, the company irrigated the waste on a 22-acre patch of land 300 yards from the lake. In 1987, radioactivity was 47 times above normal and six times higher than allowed by the company's operating license. The state found half of the irrigation water had percolated into the water table, potentially endangering surface and groundwater.

• Goliad exploration wells, Goliad County, Texas (Uranium Energy Corp): A recently permitted but presently inactive mine in Goliad County. Two residents sued Uranium Energy Corp in 2008 after the company conducted exploratory drilling in the area. The lawsuit charged that the company drilled 70 exploratory bore holes but failed to close them properly, allowing storm runoff to flow into them and contaminate the county's groundwater. A group of residents say the well water in their area became slimy and discolored and only returned to normal after drilling stopped. A federal judge dismissed the lawsuit and advised the county to pursue the matter through the state courts or a state administrative body. The county filed two new lawsuits this year. The first lawsuit was filed against the Texas Department of Environmental Quality for improper testing and analysis of groundwater. The second lawsuit was filed against the Environmental Protection Agency for similar reasons.

• Smith Ranch-Highland mine, Douglas, Wyo. (Cameco Resources): Cameco, under a subsidiary called Power Resources, has been mining in the area since 1988 and the operation remains active. In 2007, the state discovered the company was violating its agreements to restore groundwater to pre-mining condition. The state also found that the company had experienced an "inordinate number of spills, leaks and other releases" and that it was failing to detect, report and track spills as it should be. That included, in that year alone, a surface spill of 3,700 gallons of fluid containing uranium and trace minerals (although the company managed to recover 3,500 gallons). The company also spilled 11,600 gallons of disposal solution.

In addition, the state found the company was only budgeting $40 million for reclamation when the state calculated it would cost $150 million. The company reached a $1.4 million settlement with the state over the permit violations and doubled the company's bond from $40 million to $80 million. Despite the settlement, the state has continued to find violations on a routine basis at the mine over the past five years. From September 2008, the state has fined the company a total of $88,000 for improperly capping drill holes, incorrectly reporting its capping practices, failing to perform certain groundwater tests, and operating outside its permit boundaries. In March this year, the state issued a violation for the migration of injection fluid through groundwater outside the mining area, but it has not issued a fine yet.

• Crow Butte site, Crawford, Neb. (Cameco Resources): Nebraska's sole in situ leach mine was opened in 1991 and remains active. In 2008, a district court in Nebraska imposed a $50,000 penalty for violations including a surface spill and for constructing wells between 2003 and 2006 in an area that had the potential to contaminate underground drinking water. The company waited for more than a month and half to tell the state when it realized it was mining where it shouldn't.

• Kingsville Dome, Kleberg County, Texas (Uranium Resources Inc.): A permitted but currently inactive mine that was opened in 1988. A hydrologist commissioned by Kleberg County released a report in 2006 on how groundwater was effected by the mine. George Rice found that the water quality didn't meet drinking standards before mining began, but the quality had worsened in most of the site after mining and despite restoration efforts. While Rice found that no domestic wells had been affected by the contaminated water, he believed it could migrate outside of the mining boundaries if not properly restored.

This year Rice wrote a paper, as yet unpublished, that he says shows that contaminants, particularly uranium, have moved about 1,000 feet from a production site and into a well used for livestock. Rice says while the concentration of uranium in the well was always unsafe for human consumption, but it has now tripled. He believes it will continue to spread with the groundwater's natural flow. The state of Texas acknowledges the high level of uranium, but disputes Rice's conclusion.

The U.S. Department of Energy announced Monday that whichever site is chosen for a deep borehole field test — one of which is in northern Haak…

Injection and production wells are covered by plastic and metal housings Friday, Aug. 31, 2012 at Cameco's Smith Ranch-Highland uranium operation near Glenrock, Wyo. Smith Ranch-Highland utilizes in-situ recovery, a process by which water-based mining fluid is pumped into an ore-bearing aquifer to dissolve the uranium. It is the largest uranium production facility in the U.S.

ISL uranium mines in the U.S.