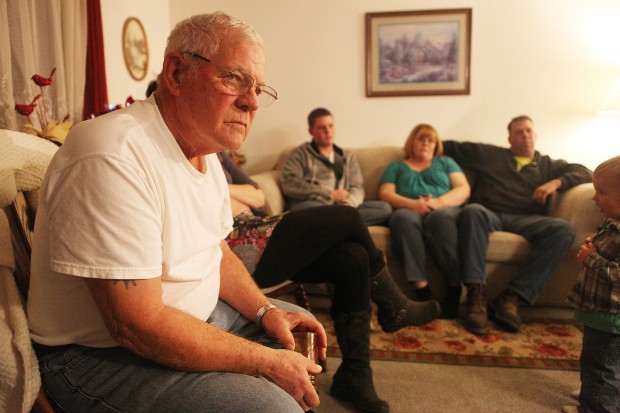 George Fish talks about how the city's case against his family's Fish Garbage company has ruined their financial stability and has taken a tremendous toll on every person in the family. Fish is seen here at his home on Dec. 20, 2011. (Kristina Barker/Journal staff) 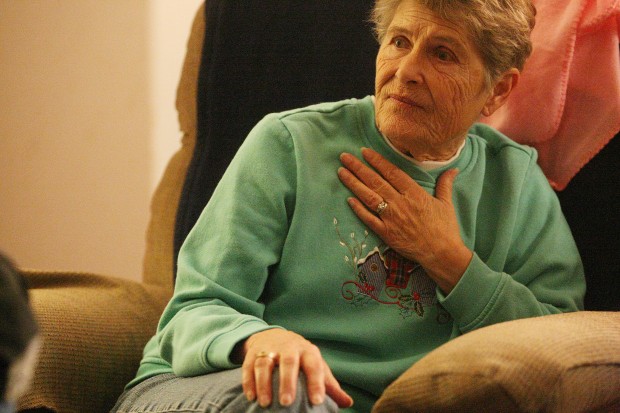 Shirley Fish listens to her husband talk about the stresses of the city's case against the family's garbage hauling company. The family feels as if they have lost everything after selling the business, spending their savings on their defense team, and the stress they deal with every day. (Kristina Barker/Journal staff) 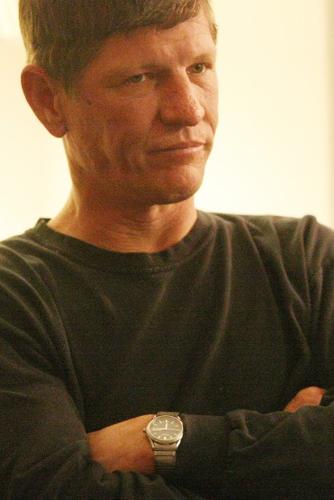 Clifford Fish talks about how the city's case against Fish Garbage Service took a huge toll on the family's finances and emotional well-being. Fish is seen here at his father George's home on Tuesday, Dec. 20, 2011. (Kristina Barker/Journal staff)

A "For Sale" sign stands at the entrance of George and Shirley Fish's Country Road home.

Gone are the rows of blue dumpsters branded with the Fish logo and the fleet of 24 trucks that represented a life-time of work for George Fish and his son, Cliff.

"The situation we're in, we will not be able to meet our payments or obligations unless we sell," George Fish said while sitting in the living room of the 1999 double-wide home he and his wife, Shirley, moved to the 10-acre site 11 years ago.

Four generations of the Fish family surrounded George and Cliff Fish while they recently reflected on over two years of legal battles in criminal and civil courtrooms with the city of Rapid City.

"We were always proud of who we were in the community and that was just ripped out of us," Cliff Fish said of the failed criminal prosecutions and ongoing civil lawsuits.

Fish Garbage Service employed 26 people, including family members, when allegations that the company had cheated the Rapid City landfill surfaced in 2009.

"Our business was just starting to get to the point that we were starting to make some money," 74-year-old George Fish said.

It had taken 13 years to bring the business Cliff Fish and his father started to that point.

"We put a lot of money into equipment and everything else. We didn't have anything left for fun or throwing away," George Fish said.

George Fish's father introduced him to the garbage-hauling business in 1948. He was driving truck at age 11.

"I kind of grew up with it," he said, recalling his youth when he and his brother ended each day hauling trash after school. "My dad worked all day and we'd go out after school and work ‘til 1-2 o'clock," George said.

George Fish said he has started and sold several businesses over the years. George and Shirley Fish even tried their hand at ranching and bartending.

But the senior Fish never strayed far from the trucking business.

Cliff Fish was 18 when he started his first hauling business with his brothers, Ron and Rich. The business evolved into Fish Sanitation. Eventually, George and Cliff Fish partnered to form Fish Garbage Service, Inc., in 1996.

Within four years, the company had acquired 40 percent of the garbage-hauling business in the Rapid City area, Cliff Fish said with pride.

Ron and Rich Fish, their sister, Joyce, and her husband, Scott Weckwerth, also worked for the business, as did Cliff Fish's son, Trevor.

"We had everything going perfect. Everything was pretty much harmony," George Fish said with a whimsical smile. "We had a good business. We built it up in spite of the competition."

It was a business that prided itself on customer service, Trevor Fish said.

"It was kind of neat to drive around and see those blue dumpsters," he said.

Life started unraveling in 2009 when then-councilman Sam Kooiker brought forth allegations from a constituent that the Fish's were taking advantage of the landfill with the help of Randy Meidinger, who worked in the landfill's scale house.

An internal investigation by solid waste superintendent Jerry Wright found there was no collusion between Meidinger and Fish, but by September 2009 a criminal investigation into the accusations was in full swing.

As George and Shirley Fish prepared to celebrate their 50th wedding anniversary in December 2009, they received notice that the city of Rapid City was suing them and Meidinger.

Meidinger was acquitted last spring but not before exhausting all of his $57,000 in his 401k account to pay his legal fees and early withdrawal penalties.

Charges were dismissed against the truck drivers a few weeks later.

Then in August, the criminal charges against the Fishes were dismissed on the third day of their trial.

Like Meidinger, the Fishes say they have exhausted their financial resources.

The disappearance of the criminal charges came too late to save the company that represented the Fish's livelihood, their retirement and they say their good name.

Cliff Fish was forced to broker a quick sale of the business when he learned in late December 2009 that the city would not renew the company's commercial hauler's license.

In what Cliff Fish describes as "a fire sale," the business sold for pennies on the dollar and that money has been spent. It will be another eight years before Texas-based Red River Waste Solutions makes a payment, they said.

"We could have piecemealed the equipment out and sold it and probably got more money out of it," Cliff Fish said."But that wasn't my intent or dad's intent. It was to keep everybody employed and take care of our customers."

"We had personal relationships with them," Trevor Fish said. "We felt we owed them."

The media storm that followed the case has been difficult on the family.

"We were convicted before we ever got out of the gate," Cliff Fish said.

The stress and losses of the last two years hang in the air of the Fish living room.

Cliff Fish found himself jobless for about a week. He took a job as a truck driver with a local construction company where he now manages the shop.

Richard Fish and his family now live in Dickinson, N.D., where he has a trucking job.

In addition to the financial costs, the past two years have taken a physical and emotional toll on the family and especially her parents, Joyce Weckwerth said.

"You could just see them wither," she said.

Although, his life's work has slipped away, George Fish said his faith in the Lord is stronger than ever.

"It's the only way I think we got through it," he said.

Memories of the day six police vehicles pulled into the driveway on Nov. 30, 2009, to serve a search warrant still haunt Trevor Fish. Guns were drawn and guards posted while 12 boxes of records and the data from the company's computers were seized, according to Trevor Fish who said he witnessed a law enforcement officer with his gun drawn on the perimeter of his property. The Rapid City Police Department denies that guns were drawn during the execution of the warrant.

"We were just working away. It was 2:30 in the afternoon," Trevor said. "It was terrible."

Cliff Fish still wonders why the city would not allow the company to continue doing business while it defended the accusations.

His wife, Kim, a stone-setter for Landstroms, has taken a second job to help with expenses.

"In those first days, I think I ate a meal every fourth day," Kim said. Two years later Christmas spirit is still hard to find, she said.

Life does go on, however.

George and Shirley Fish's third great-grandchild is just a few weeks old. While they find joy in their 11 grandchildren and the arrival of the fourth generation, their days are clouded with uncertainty.

During the years that Social Security wasn't mandatory, any extra money went into building his business and paying his employees. George Fish had stepped back from an active role in the business in 2005. The business was supposed to support his retirement.

"I was mainly living to leave something for the kids," he said.

Although the criminal charges are behind them, the civil case continues to drag on and so does the uncertainty about the future.

"I worked hard for 60 years and it's hard to watch it go," George Fish said. "I just hope I have enough left to go fishing."

[Editor's note: This story has been changed to reflect three corrections:Then-Councilman Sam Kooiker brought forth allegations from a constituent that the Fishes were taking advantage of the landfill. Investigators seized data from computers at the company during the exection of the search warrant and the information about guns being drawn during the execution of the search warrant should have been attributed to Trevor Fish.  The police department denies that guns were drawn.]

For more than a year, Randy Meidinger fought criminal and civil legal battles with few supporters.

Farmer says Amtrak crash could have been averted

Farmer says Amtrak crash could have been averted

George Fish talks about how the city's case against his family's Fish Garbage company has ruined their financial stability and has taken a tremendous toll on every person in the family. Fish is seen here at his home on Dec. 20, 2011. (Kristina Barker/Journal staff)

Shirley Fish listens to her husband talk about the stresses of the city's case against the family's garbage hauling company. The family feels as if they have lost everything after selling the business, spending their savings on their defense team, and the stress they deal with every day. (Kristina Barker/Journal staff)

Clifford Fish talks about how the city's case against Fish Garbage Service took a huge toll on the family's finances and emotional well-being. Fish is seen here at his father George's home on Tuesday, Dec. 20, 2011. (Kristina Barker/Journal staff)