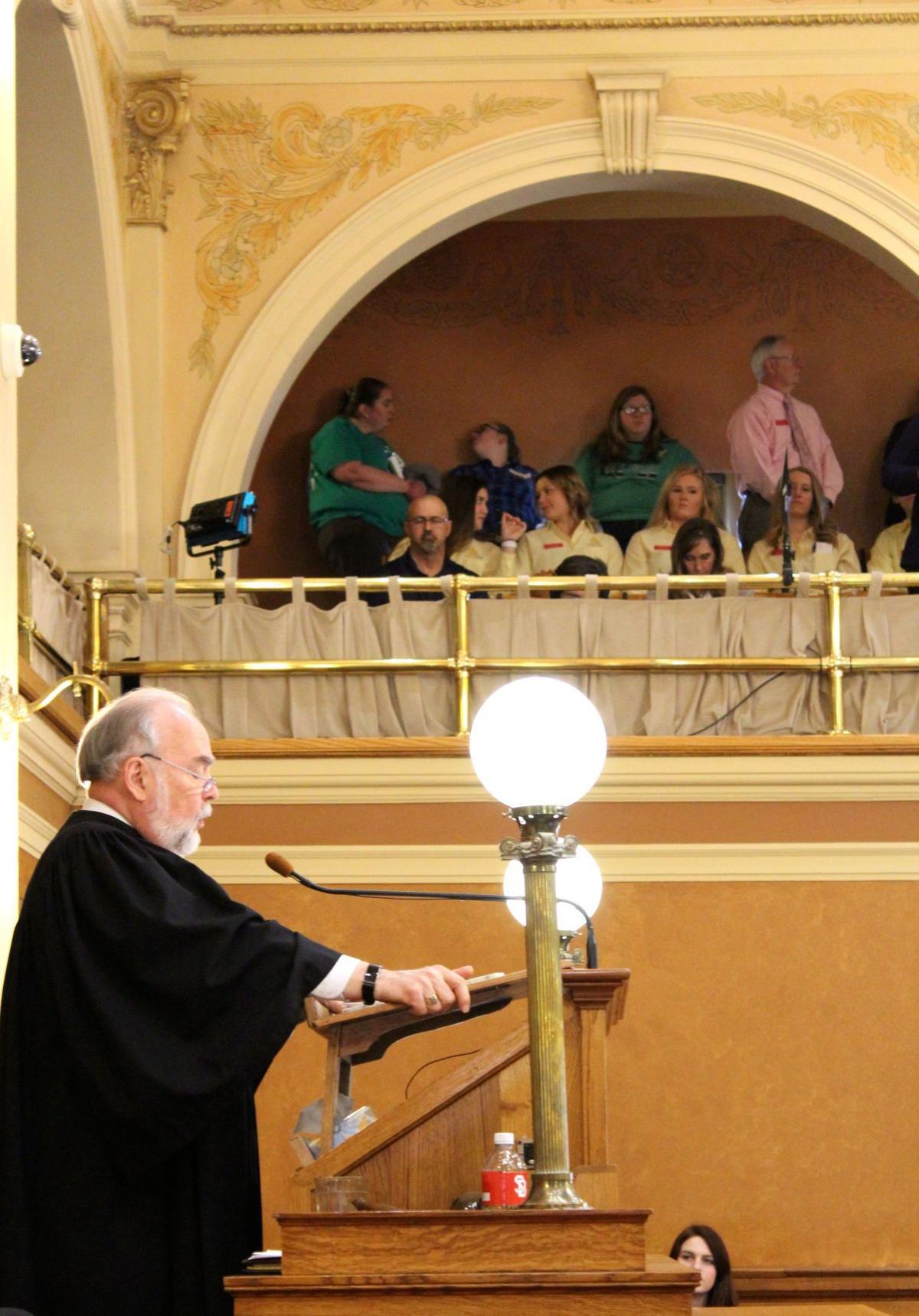 South Dakota Supreme Court Chief Justice David Gilbertson delivered his 19th and final State of the Judiciary message on Wednesday to a joint session of the Legislature. 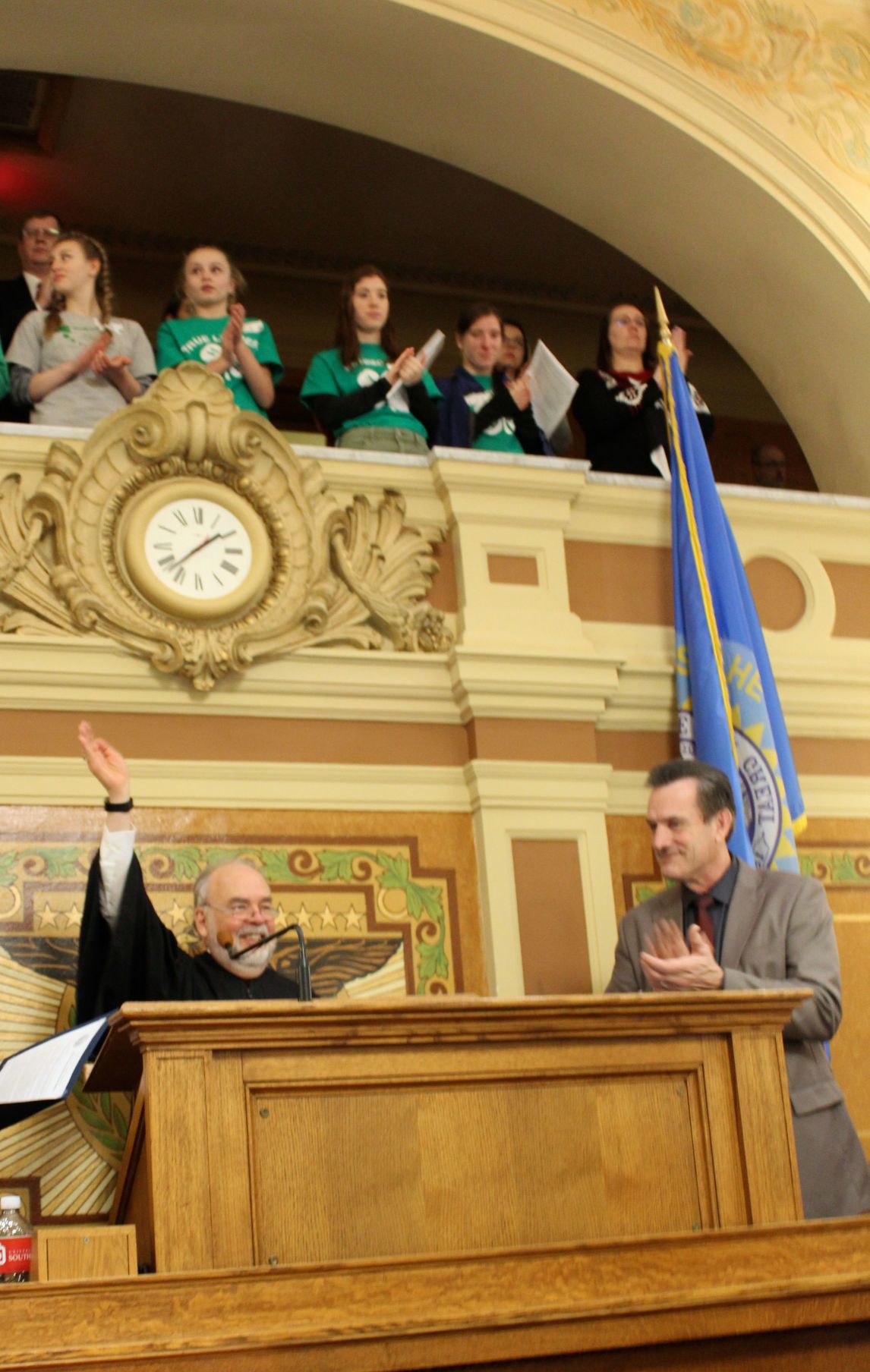 South Dakota Supreme Court Chief Justice David Gilbertson waves, acknowledging a standing ovation he received prior to giving his final State of the Judiciary message to a joint session of the Legislature and a packed gallery.

PIERRE | During his tenure as chief justice of the South Dakota Supreme Court, David Gilbertson not only dispensed justice, he also saved lives. That was part of the message he delivered Wednesday in his last State of the Judiciary message to the Legislature.

“I leave with satisfaction knowing that there are people alive today who would not otherwise be without our drug, DUI, veterans and mental health courts,” Gilbertson told a joint session of the Legislature. “Our goal was to swell the employment rolls, not the cemeteries.”

After a 34-year judicial career and spending the last 19 as chief justice, Gilbertson faces mandatory retirement. During his message he looked back at the programs that helped save lives.

In addition to saving lives, the special courts are saving money. Gilbertson said a year in the DUI and drug courts costs $8,015 per person while a year in the penitentiary costs about $22,000.

Drug, DUI and veterans courts served 594 participants in 2018. Of their 135 graduates, only 18 percent have re-offended.

“That’s a substantially higher success rate than the 43 percent success rate for people paroled from the penitentiary,” Gilbertson said.

In 2017 the Legislature found ways to help people in the court system who have mental health issues. Legislation passed that year changed the wait time for competency hearings from as much as six months to an average of just 37 days. The legislation expanded the number of competency evaluators from six to 31.

“It goes a long way to ensure statewide coverage,” Gilbertson said of the changes. “No longer do all roads lead to Yankton and the Human Services Center located there.”

There are three veterans treatment courts in Minnehaha, Pennington and Codington counties. All programs are under the direction of a judge who is a veteran and can understand the challenges veterans face.

The veterans court is assisted by the Veterans Administration and, when appropriate, allows access to VA inpatient treatment.

The Rural Attorney Program has grown to include contracts with 25 rural counties to help provide lawyers in underserved areas. Last year, the program was expanded to include municipalities with populations of 3,500 or fewer. The first to sign on were Elk Point and Sisseton.

“Not one attorney who has gone into the program later left rural practice due to lack of available legal work,” Gilbertson said. “The need is there and the need is being met.”

Gilbertson refused to make any pronouncements about what the future will hold for the justice system in South Dakota. He noted that future decisions will be guided by the Constitution, the statutes and “the goal of maintaining a peaceful resolution of the citizens’ disputes.”

“The people within the judicial system come and go, but the fundamental basics remain the same,” Gilbertson said. “We do not want to become a legal dinosaur lumbering off into oblivion.”

PIERRE | On Friday, legislative leaders from both parties wouldn’t predict the fate of HB1057, a bill that would criminalized some medical tre…

PIERRE | A memorial service in the Capitol on Thursday honored 15 legislators who died in the past year. The service took place in the House c…

South Dakota Supreme Court Chief Justice David Gilbertson delivered his 19th and final State of the Judiciary message on Wednesday to a joint session of the Legislature.

South Dakota Supreme Court Chief Justice David Gilbertson waves, acknowledging a standing ovation he received prior to giving his final State of the Judiciary message to a joint session of the Legislature and a packed gallery.