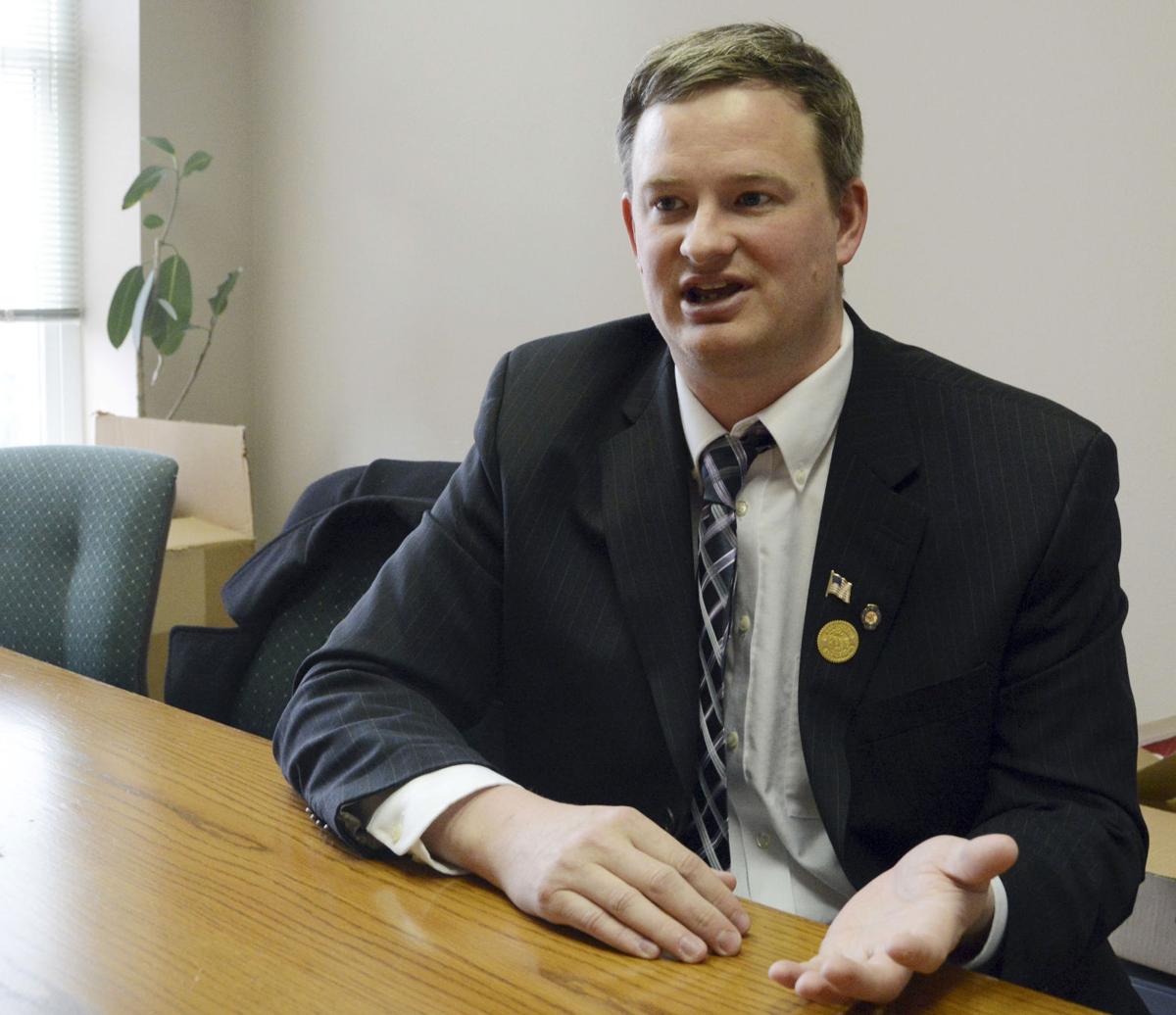 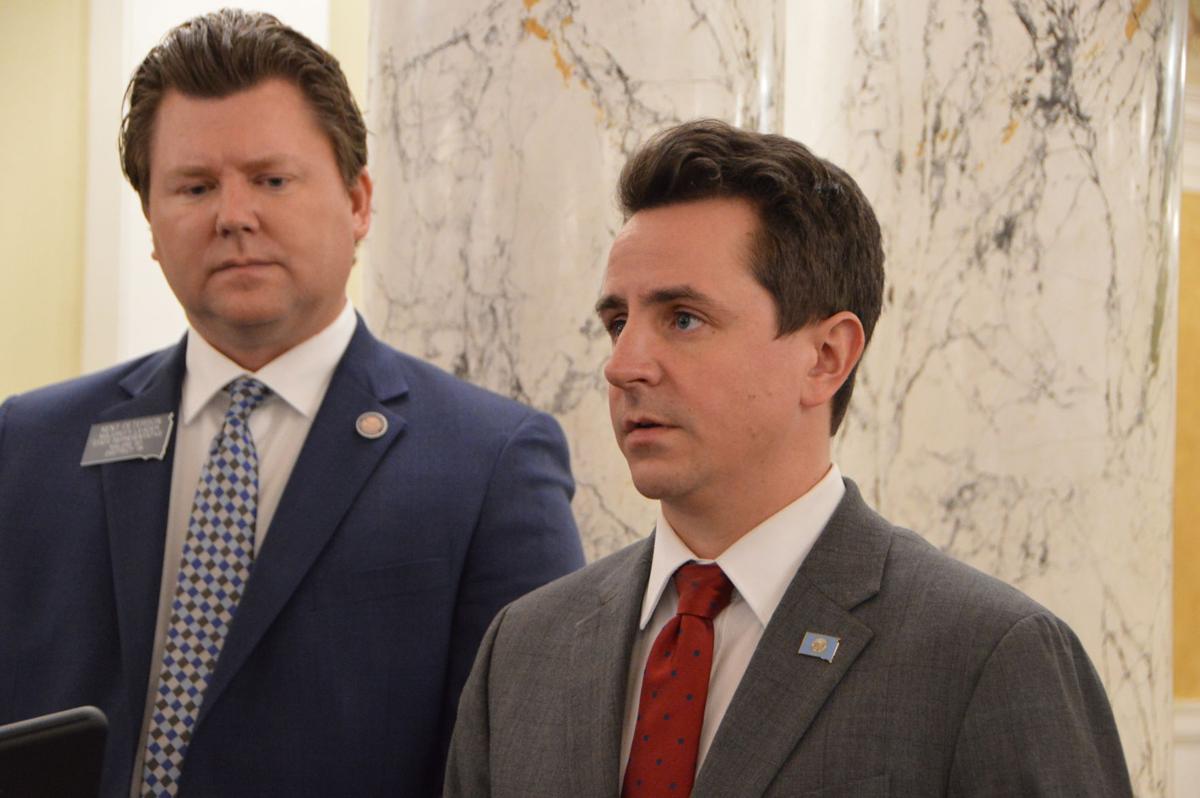 Rep. Will Mortenson, R-Pierre, right, talks about the impeachment articles he filed against Attorney General Jason Ravnsborg in the State Capitol Rotunda on Tuesday afternoon.

Rep. Will Mortenson, R-Pierre, introduced articles of impeachment Tuesday against Attorney General Jason Ravnsborg after he declined to resign after hitting and killing Joseph Boever with his car outside of Highmore in September.

Ravnsborg was charged with three misdemeanors last week, causing political leaders from the South Dakota Democratic Party to Gov. Kristi Noem calling on him to resign his position.

Mortenson is the resolution’s prime sponsor, but it is supported by House Majority Leader Kent Peterson, R-Salem, and House Minority Leader Jamie Smith, D-Sioux Falls. The resolution was not discussed on the House floor Tuesday, but will be introduced on the floor Wednesday.

Mortenson said the decision to pursue impeachment was the most difficult one he's made in his entire life and he did not do so lightly, but the magnitude of the Attorney General's infraction and the involvement of a citizen's life moved him to act.

"It's a real human tragedy, there's no doubt about it, for all parties involved," Mortenson said in a press conference Tuesday afternoon. "A constituent of mine, Mr. Boever, has died and it's tragic on all sides, but it's something this body has an obligation to look into whether that conduct [meets] the very high standard that the people of South Dakota have come to expect."

House Resolution 7001 gives two reasons for the impeachment proceedings: causing the death of Boever and for statements and actions following Boever’s death that fail to meet the standard of the Office of the Attorney General. 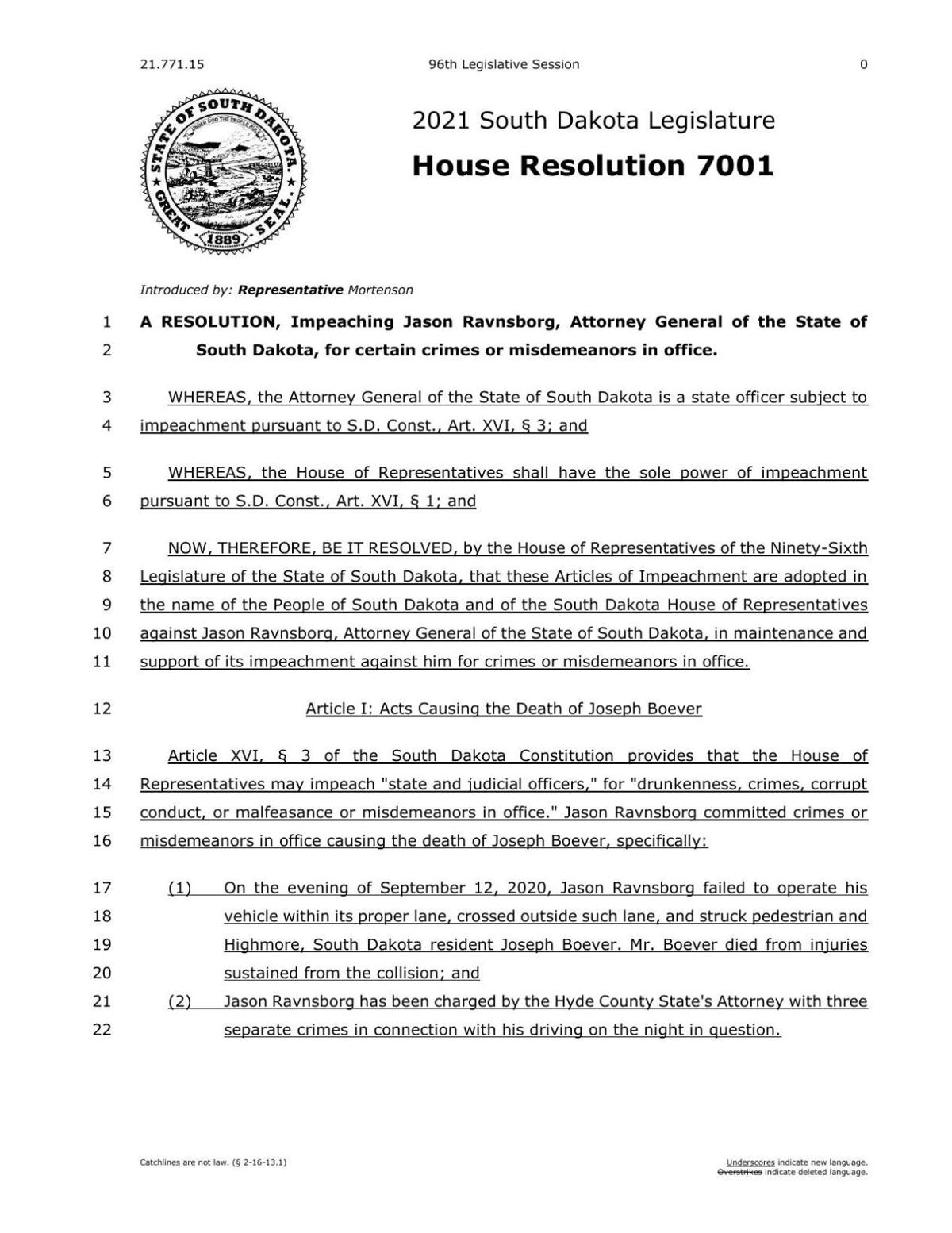 Mortenson said his decision to file the resolution was the result of months of consideration and advice. He said in a statement that while the charging decision may have been correct, the Attorney General “owes a higher duty” to both the state and its citizens.

“In his actions on the night of Sept. 12, 2020, and following the incident, Attorney General Ravnsborg breached that duty and has lost the confidence of the people of South Dakota. When that happens, I believe the legislature has an obligation to exercise its constitutional authority to remove him from office,” Mortenson wrote in a statement. 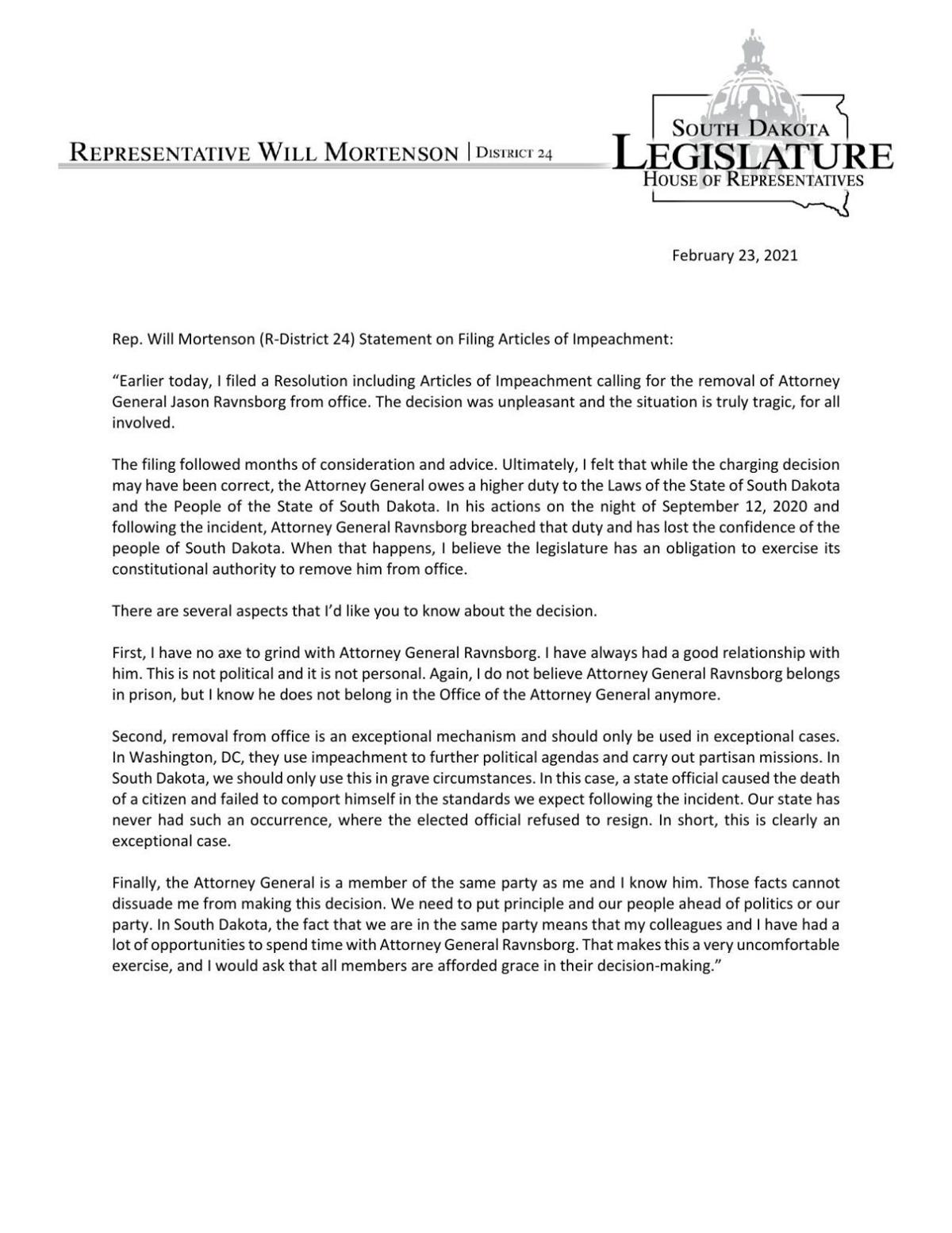 Article XVI, section 3 of the state Constitution allows the House of Representatives the sole authority to impeach state and judicial officers for “drunkenness, crimes, corrupt conduct, or malfeasance or misdemeanors in office.” Mortenson said this should only be used in “grave circumstances,” which he contended fits the situation.

“In this case, a state official caused the death of a citizen and failed to comport himself in the standards we expect following the incident. Our state has never had such an occurrence, where the elected official refused to resign. In short, this is clearly an exceptional case,” he said.

Mortenson did not elaborate on what actions or dispositions led him to call for impeachment, only saying that Ravnsborg's actions were "unbecoming" of his office. Mortenson said he did not draw on any information that wasn't in the public record in deciding to pursue impeachment.

“This isn’t about party or politics. It’s about doing the right thing for South Dakota,” said Peterson. “We must hold our elected leaders to a high standard. In this case, the Attorney General has failed to meet that standard, and we owe it to the people to bring these Articles,” Peterson said in a statement.

“What happened was a tragedy for all involved. However, that cannot deter us from fulfilling our duties. The Attorney General has lost the confidence of the people of South Dakota, and he should be removed from office for the betterment of the state,” Smith said.

Mortenson said that the impeachment resolution is not political or personal and that he has always had a good relationship with Ravnsborg.

“We need to put principle and our people ahead of politics or our party. In South Dakota, the fact that we are in the same party means that my colleagues and I have had a lot of opportunities to spend time with Attorney General Ravnsborg. That makes this a very uncomfortable exercise, and I would ask that all members are afforded grace in their decision making,” Mortenson said.

Ravnsborg has declined to resign his position, according to his personal spokesman Mike Deaver.

"The Attorney General does not intend to resign. At no time has this issue impeded his ability to do the work of the office. Instead, he has handled some of the largest settlements and legislative issues the state has ever been through," Deaver said. "AG Ravnsborg has fought for the rule of law and personal liberties and would hope that he is afforded the same right and courtesy." 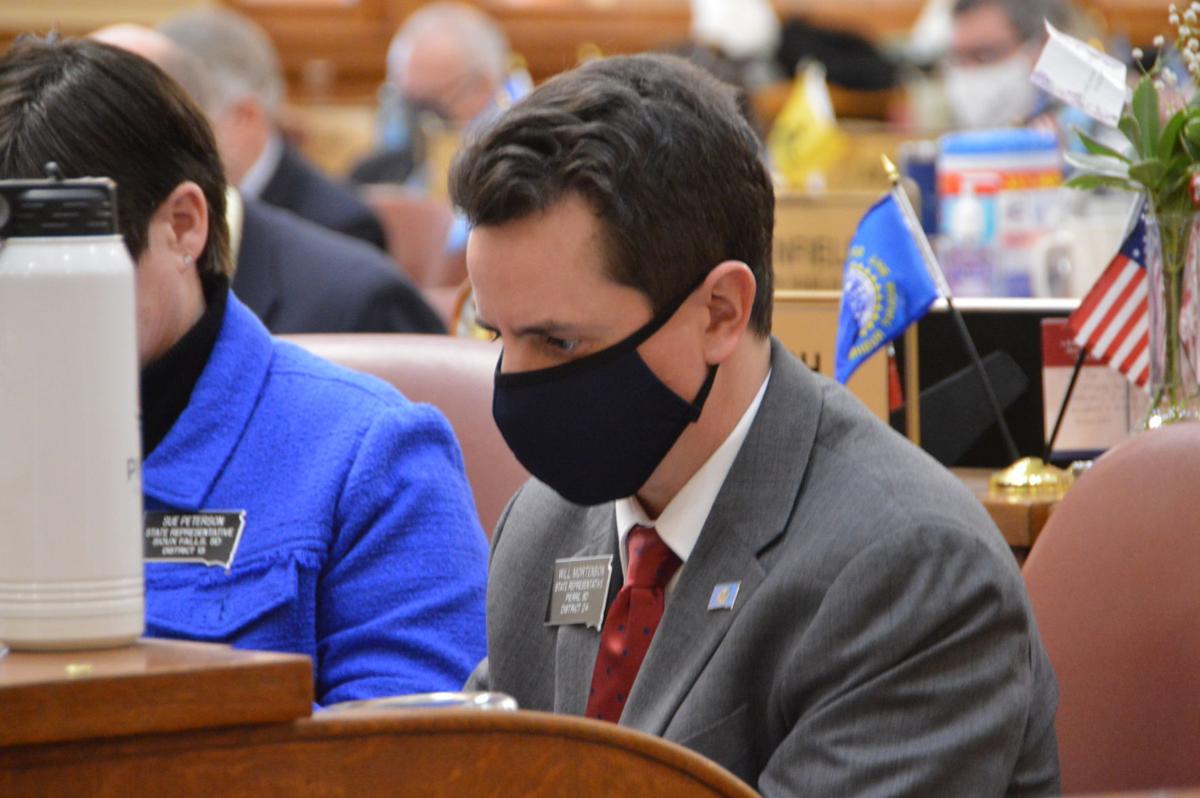 Rep. Will Mortenson, R-Pierre, right, talks about the impeachment articles he filed against Attorney General Jason Ravnsborg in the State Capitol Rotunda on Tuesday afternoon.