The state's Joint Appropriations Committee deferred action Wednesday on a second letter of intent regarding applications for federal grants involving education in American history and civics.

The second letter focuses on federal grants for higher education and addresses Executive Director of the South Dakota Board of Regents Brian Maher and Executive Director of the Board of Technical Education Nick Wendell. It is similar to the letter of intent addressed to State Education Secretary Tiffany Sanderson the JCA sent in May, but applies to universities, community colleges and technical colleges.

Both letters ask the respective entities to delay application of federal grants that concern education in history or civics until the Legislature has had a chance to act upon legislative initiatives concerning history and civics education during the 2022 legislative session.

The Legislature anticipates bills aimed at barring “action- or project-based civics” from South Dakota classrooms next session. The letter also expects that, even after the 2022 session, the BOR and the BTE will consult with the JCA before applying for any such grants.

JCA Chair Senator Jean Hunhoff, R-Yankton, said the committee would defer action until next month’s meeting because the federal Department of Education recently released new guidance on applying for American history and civics grants. Hunhoff said the committee always wanted to give the two affected institutions the opportunity to reply to the letter, dated July 21, before taking action. 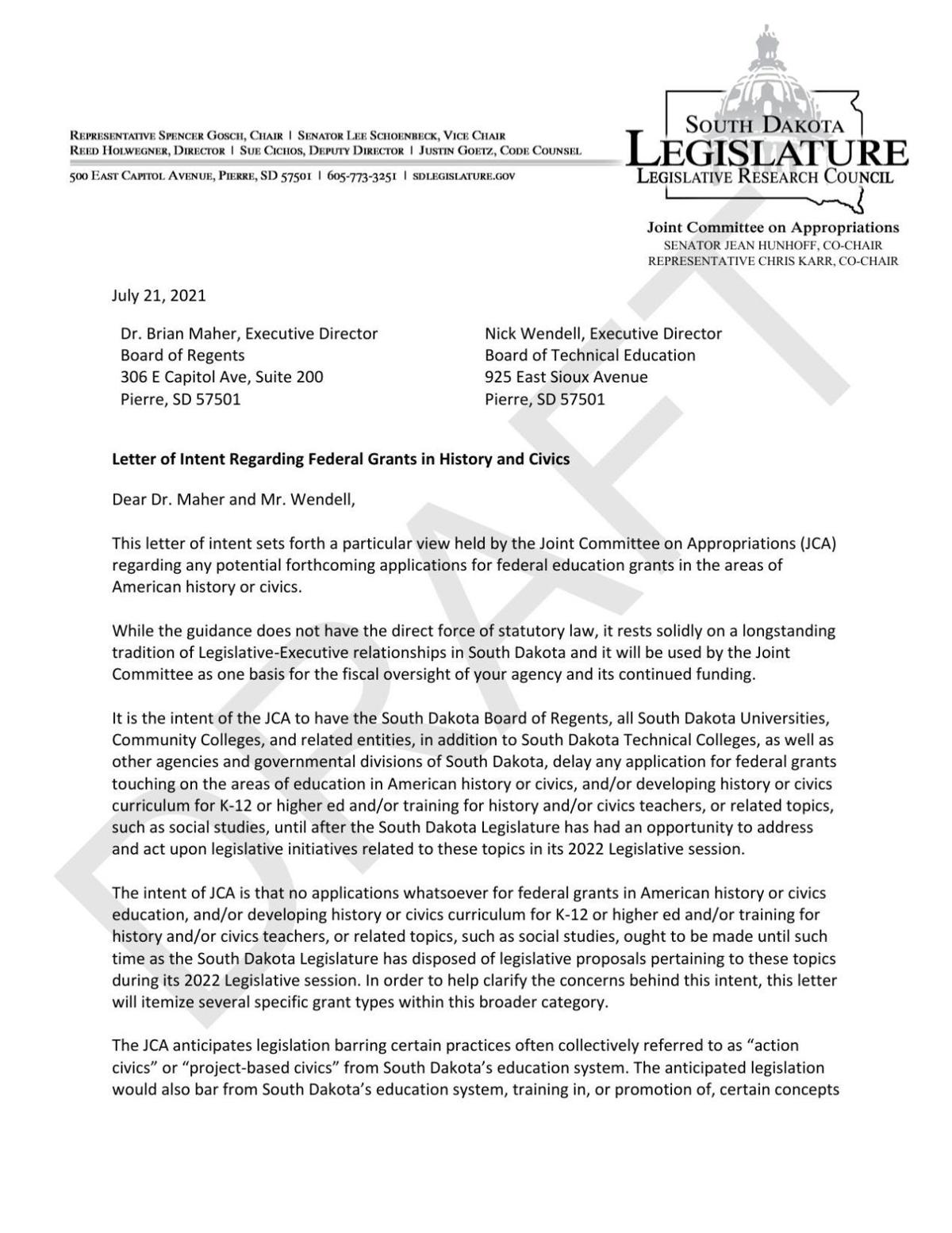 The letter directly references bills currently pending in Congress, the Civics Learning Act of 2021, the Civics Secures Democracy Act, the Inspire to Serve Act, or the Promoting Programming, Research, Education, and Preservation Civics and Government Act, which all offer grants to support educational programs in civics and history.

The letter of intent does not have the direct force of law, but it reminds its recipients that the Appropriations Committee could use the entities’ cooperation, or lack thereof, to determine how much funding they get in the future.

South Dakota has its own civics and history curriculum initiative, which provided $900,000 in one-time state funds to support educators and provide resources to help students “understand our country, state, and story; equip them with the knowledge and experience necessary to engage as informed citizens; and prepare them to participate in civil discourse on important issues.” The initiative involves pilot program grants, curriculum materials review and development, and professional development, and is expected to continue through Fiscal Year 2023.

The state Legislature’s proposed legislation would ban training in and promotion of what the JCA calls “critical social justice” and “cultural Marxism” and claims that the ideologies listed are radical, biased, and factually unproven.

Critical race theory and other social justice theoretical frameworks’ place in education have been hotly debated on the national level in recent months. CRT asserts that race is a socially constructed category and that institutions in the United States function by perpetuating racial inequity.