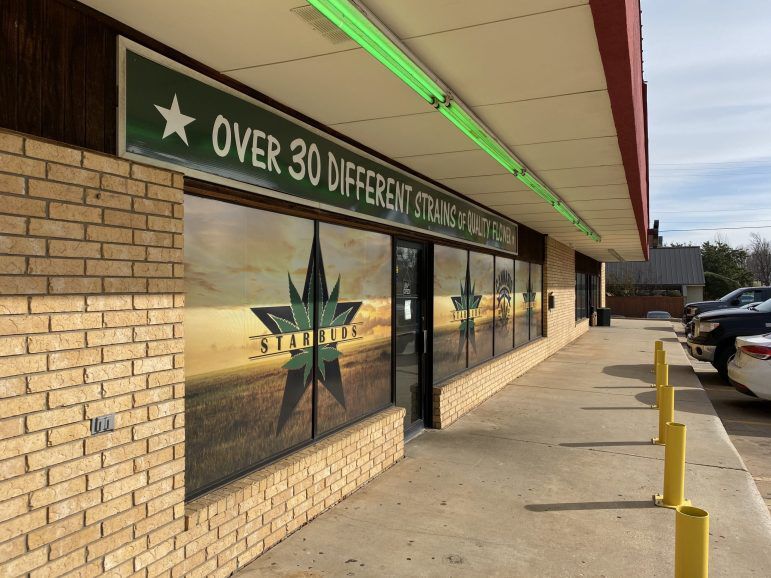 Medical marijuana dispensaries have opened across the state of Oklahoma, including at this location in Oklahoma City. 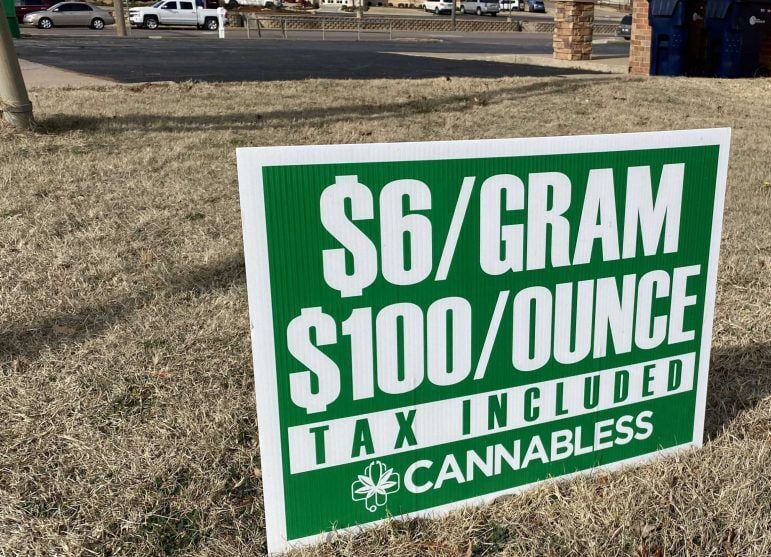 Medical marijuana in Oklahoma is relatively affordable, even with a sales and excise tax added to each purchase.

As South Dakota moves forward on creating a regulatory system for medical marijuana by the end of 2021, some people have looked to Oklahoma for guidance on how — or how not to — develop a functioning framework.

Oklahoma voters approved the legal sale, possession and use of medical marijuana on a statewide ballot measure in June 2018. The measure required rapid implementation of a regulatory framework, providing only about 10 weeks to prepare for legal sales compared with an average of more than a year in most states.

Since then, the state has taken a free-market approach to certification of marijuana-related businesses and has one of the least restrictive physician-certification processes for patients who want to obtain medical pot.

At a press conference in mid-March, South Dakota Gov. Kristi Noem said Oklahoma was the only state to put a medical marijuana program in place faster than required by South Dakota Initiated Measure 26, which takes effect July 1 and has deadlines for creation of a regulatory framework by the Department of Health by Oct. 29, 2021, and issuance of medical marijuana cards to patients by Nov. 18, 2021.

Noem, who opposes legal marijuana in any form, said the resulting program in Oklahoma is “a mess.” Noem pushed for a one-year delay in implementation of the South Dakota medical program but was rebuffed by the state Legislature.

Noem spokesman Ian Fury responded to an email from South Dakota News Watch seeking clarification of the governor’s views by providing only a link to a June 2020 news report by Oklahoma Watch, a nonprofit news organization. That article begins, “Welcome to the Wild West of weed,” and goes on to examine how fast Oklahoma started and has since expanded its medical marijuana program. Asked for further specifics of Noem’s concerns about Oklahoma’s program, Fury failed to respond.

Some experts in Oklahoma say the program there has been a great success because it has embraced the wishes of voters by making medical marijuana widely available to those who need it and obtain a physician’s approval to get it.

“The main goal was to legalize access for medical marijuana patients and provide them an abundant source of medicine, and 1,000 percent that has been a success,” said Chip Paul, a business owner who played a lead role in writing the state’s regulatory framework for medical pot.

Most states that have approved medical marijuana, including South Dakota, North Dakota, Minnesota and Montana, have a list of medical conditions that a patient must be diagnosed with before becoming certified to obtain medical marijuana. One significant area where Oklahoma stands apart in the U.S. is that patients do not have to suffer from any specific illness or condition; they must only get a doctor’s certification that the marijuana will help them in some way.

Oklahoma has also seen the rise of a cottage industry of physicians who make themselves readily available to approve medical marijuana cards for patients, including through virtual visits. For a time, doctors were diagnosing patients from the same buildings as marijuana dispensaries, though that practice has been banned.

Recent data from the Oklahoma program reveal that the raw number and per-capita rates of certified patients and number of dispensaries dwarf the patient-and-dispensary totals from other Great Plains states where medical marijuana is legal.

As of March 5, 2021, Oklahoma had more than 381,000 patients or caregivers who are legally able to obtain and use medical marijuana, making up about 9.5% of the state’s overall population of 4 million people. The state had about 2,150 medical marijuana dispensaries on that date.

Paul, who led the Oklahomans for Health group that authored and promoted the medical marijuana initiative in Oklahoma, acknowledged there have been some bumps in the road to creating a sensible regulatory framework in the state. But Paul said that overall, the program has been effective in providing medical marijuana to those who want or need it to reduce pain or anxiety, ease suffering from illness or reduce symptoms of psychiatric conditions such as PTSD.

Paul noted that 57% of voters approved medical marijuana in 2018 but that subsequent surveys have shown that 70% of Oklahomans support legalization (69.92% of South Dakota voters in November 2020 approved IM 26).

Paul said he disagrees with criticism that Oklahoma’s medical marijuana is so loosely regulated as to become a de facto recreational program.

“It might look recreational, but it is for people who have a medical need and who are motivated enough to get on the radar of a medical doctor,” said Paul, president of the firm GnuPharma. “It’s not like you can go in a dispensary, show your ID and get marijuana; you still have to have a medical card.”

He added that states that require patients to have certain qualifying medical conditions before obtaining medical marijuana are blocking many patients who really need it.

Paul said he was not surprised by opposition to medical marijuana from elected officials. “It’s interesting that the legal-marijuana issue is one of the biggest disconnects between the people who really want it and how the people who lead us interpret that,” he said.

South Dakota state Rep. Mike Derby, a leader of the legislative Cannabis Caucus, said he appreciates that Oklahoma has provided a level of “social equity” to its program by creating business opportunities for entrepreneurs and small-business owners across the state.

“The sales and licensing and distribution are not controlled by just a few big companies; instead, they provide entrepreneurs a chance to participate in this industry,” said Derby, R-Rapid City. However, Derby added that South Dakota should not use too much of Oklahoma’s medical marijuana program as a model for its own.

Terri Watkins, spokeswoman for the Oklahoma Medical Marijuana Authority within the state Department of Health, said the state was forced to rush to implement its medical marijuana program but has done its best to accommodate the needs of medical patients and businesses and individuals in the industry. OMMA was created as a separate division of the health department solely to manage the state medical marijuana program.

“I would certainly not say we’re a mess,” Watkins said, noting that the state recently created a seed-to-sale tracking program and has a lab-testing program to monitor potency and safety of medical marijuana. “We had some challenges implementing a program in about two months, and that made it difficult, but now there are a lot of things coming into play two and half years later that we’re looking to improve on.”

Hausheer called the Oklahoma program a “free-for-all” that has made it too easy for patients to get medical marijuana and has in many ways become essentially a recreational adult-use marijuana program.

Hausheer said she had concerns about several negative health aspects of overprescribing of medical marijuana, including the propensity for motorists to drive while high; the potential for harm to unborn children of marijuana users; and a lack of safety regulations on the production, packaging and sale of marijuana products.

She said the medical community successfully lobbied for a 60-day license that allows for temporary medical marijuana use; initially all licenses held by patients were valid for two years.

Oklahoma physicians are also now able to request a license revocation if necessary; safety labeling on products is clearer and better prevents child misuse; and smokeable products are now subject to the same public-use laws as tobacco products. The association also tried to require that a pharmacist be on site when marijuana is dispensed and to increase training requirements of employees who dispense marijuana.

Hausheer, who helped form a statewide group called “Keep the Medical in Medical Marijuana,” says she is troubled by how quickly and widely medical marijuana has been made available in the state, including across rural Oklahoma.

“Your worst fear is that it’s going to show up in every inch of your state, and it has really, it has overtaken things,” she said.

Hausheer and others in the medical association continue to push for greater influence in the regulation of medical marijuana in Oklahoma.

“I’m not an anti-pot person … for the right circumstance or situation, I get it,” Hausheer said. “But I don’t like how this was one size fits all, free-for-all. People have just gone to this because they don’t know what else to do, rather than seeking help for medical conditions where good therapeutic or medical approaches haven’t been tried or they don’t know they exist.”

Dr. Benjamin Krasne said patients are generally aware of how marijuana can help them. Krasne is the founder and owner of DigiDrs.com, an online physician-referral service that aids potential medical marijuana patients in finding a doctor to diagnose them in Oklahoma and three other states. The site offers a service in which virtual consultations are free and patients pay a $109 fee only if a medical marijuana card is issued.

Krasne said he looks at the heavy regulation of medical marijuana as being similar to Prohibition, a mostly failed experiment to stop Americans from drinking alcohol. He said people who are suffering should be given a simple way to access any medication that they and a doctor feel can help them, including marijuana.

“I don’t see how you can stand in its way,” Kranse said. “People want this for relief.”

South Dakota’s proposed medical marijuana legislation allows an adult 21 or over, or a younger person with parental permission, to qualify for a medical marijuana card if a doctor diagnoses them with a “debilitating medical condition, a chronic or debilitating disease or medical condition or its treatment.” Those conditions must produce one or more of the following: cachexia or wasting syndrome; severe, debilitating pain; severe nausea; seizures; or severe and persistent muscle spasms, including those characteristic of multiple sclerosis; or any other medical condition or its treatment added by the [health] department.”

South Dakota voters approved a constitutional amendment in November that would have legalized recreational marijuana use by adults starting July 1, 2021, but that measure was overturned by a circuit judge and is now likely to be decided by the state Supreme Court.

Gov. Kristi Noem has declined to sign House Bill 1217, which would restrict transgender girls from competing in female sports. Instead, she wa…

Medical marijuana dispensaries have opened across the state of Oklahoma, including at this location in Oklahoma City.

Medical marijuana in Oklahoma is relatively affordable, even with a sales and excise tax added to each purchase.