Become a Member
Read Today's E-edition
Share This
A turn toward tradition, as some Catholic churches resume Latin Mass
0 Comments
Share this
1 of 4 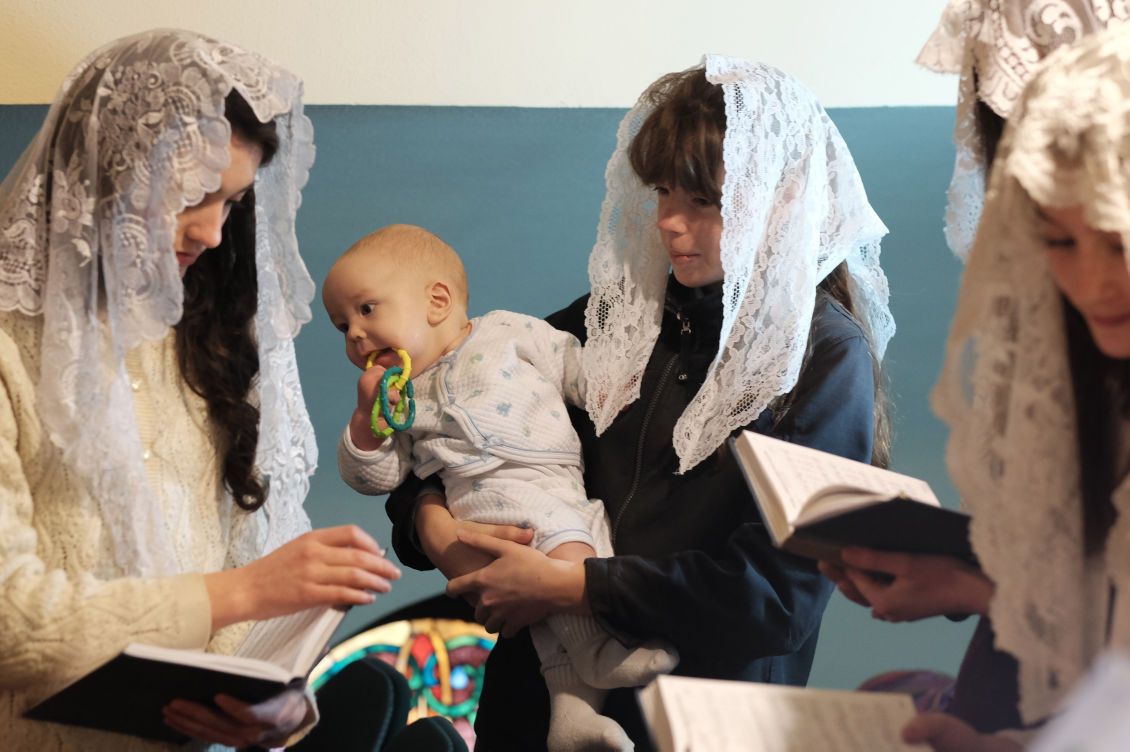 Abigail Brett, 15, holds her 6-month-old brother, James Brett, while Isabella Stelzle, left, reviews hymns as the choir prepares for the Sunday morning Mass at the Immaculate Conception Church on Fifth Street in Rapid City. Tiffany Brett, mother of Abigail and James, conducts the choir at the church, which still celebrates the Roman Catholic Mass in Latin. 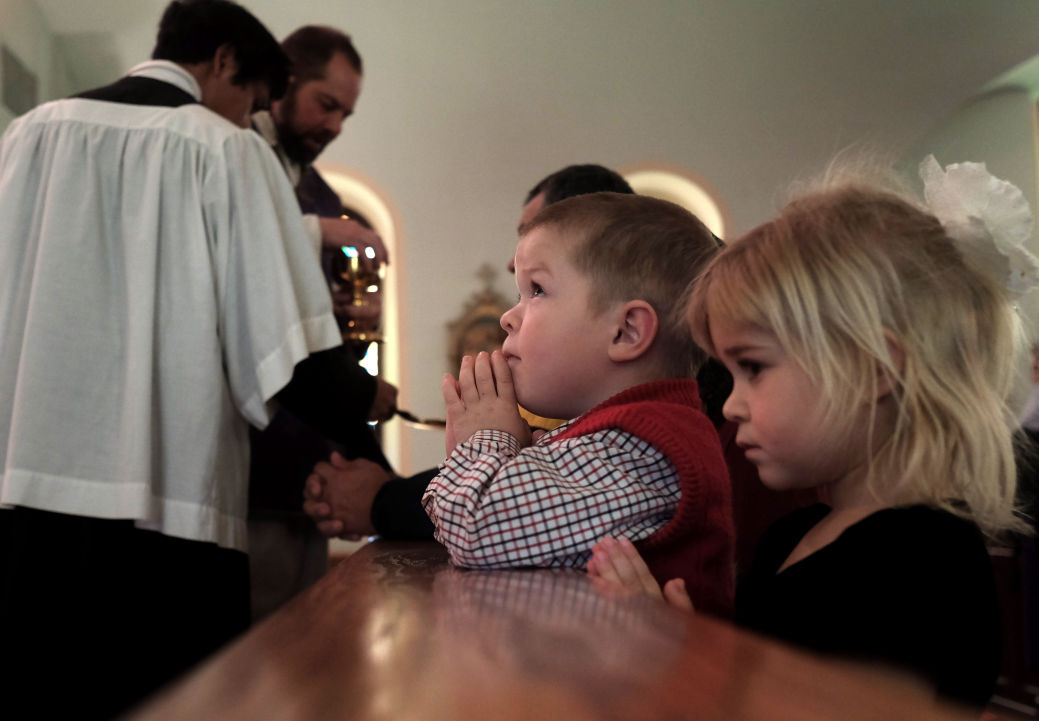 Cyprian Bruch, 5, and his sister Felicitas, 3, of Sturgis, kneel as communion is distributed last month during Mass at the Immaculate Conception Church on Fifth Street. The Bruch family travels from Sturgis to attend the Catholic Latin Mass at the church. 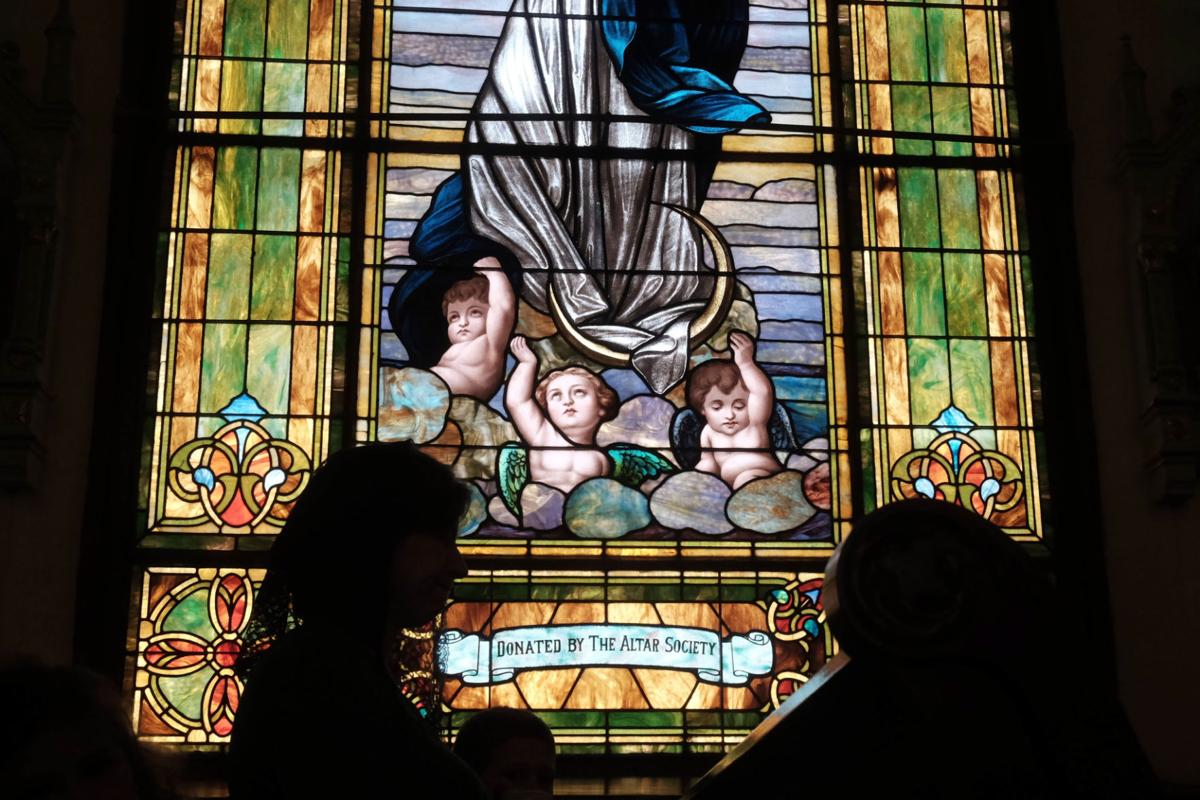 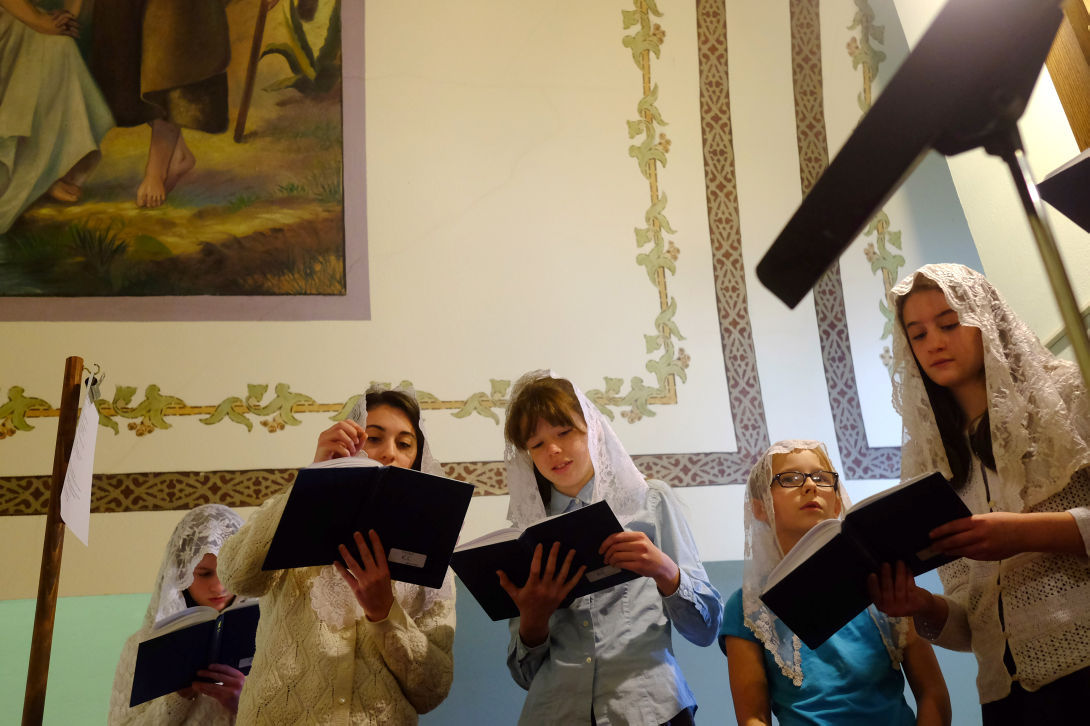 Four decades ago, Gary Velder and some like-minded Roman Catholics would gather in motel rooms to experience Mass their preferred way: in Latin.

Until the 1960s, all Roman Catholic Masses were in the traditional Latin language. But as the church modernized in that decade of change, the Vatican allowed the Mass to be celebrated in the vernacular, or language of the local people. Most U.S. churches switched to English, which is why the Latin traditionalists had to resort to finding other places to worship.

But these days, Velder and his wife, Linda, two Sundays a month travel from their home in Newell to St. Joseph Catholic Church in Spearfish to attend the service, which is celebrated in the traditional Latin.

Since the early 2000s, there has been an increase in Latin Mass services across the nation.

St. Joseph's Latin Mass, celebrated by Father Christopher Hathaway at 2 p.m. on the first and third Sundays of the month, is one that the Velders greatly enjoy.

“It’s the traditional way all the way from the Lord,” Gary Velder said.

Hathaway is the priest at Rapid City's Immaculate Conception Church, at 922 Fifth St., which has been holding Latin Mass for nine years. He said he has been celebrating the Latin Mass in Spearfish for about five years.

After the Vatican's ruling in the 1960s, many priests adopted and worshipers adapted to the celebration of Mass in English, which Hathaway refers to as the new rite. The old rite was never banned, Hathaway said, but many priests simply didn’t offer Latin Mass.

Although the new rite mostly overlapped the old Mass traditions, there were faithful followers who continued to prefer the Latin rite.

Gary Velder was one. In the mid-1970s, he and others would gather in motel rooms or other various locations to hold a Latin Mass. With the recent spread of the Latin rite, he said, "It’s encouraging the Mass will continue.”

Immaculate Conception Church is the only Catholic church that offers Latin Mass in Rapid City. The Mass is at 10 a.m. on Sundays.

The history of the Latin Mass in Rapid City hasn't been without controversy. In March of 2002, then-Bishop Blase Cupich barred a group of Latin-rite Catholics from having Good Friday and Easter vigil services in Latin in the church.

Cupich, who is now archbishop of Chicago, said in a 2002 Journal interview he did it for the sake of unity. "We're just looking for an opportunity on an annual basis for us all to worship together, for one moment of unity as a Catholic Church," he said.

But the Latin-rite adherents vowed to have their Good Friday services in Latin on the sidewalk in front of the church.

Since then, it seems, emotions have cooled, and the Latin Mass has thrived locally, if only in limited ways. Hathaway said both the Rapid City and Spearfish churches began offering Latin Mass at the request of the worshipers.

Mauri Sobotka, 25, of Whitewood, said she enjoys the Latin Mass more than the new rite.

“There is more focus on God and not the people,” Sobotka said. “I can praise God mentally and quietly. It’s not as showy. It’s just a different way of presenting the service. It’s something that’s timeless.”

Hathaway added the more quiet service is a big draw for worshipers. Prior to Mass at St. Joseph's on Dec. 20, worshipers were kneeling and praying, rather than catching up on the week’s events.

In the new rite, the priest usually faces the congregation, but in a Latin Mass, the priest faces the tabernacle and altar. The practice, Hathaway said, is to reinforce that the worshiper must get to know God.

“This more deeply allows you to enter that mystery of knowing God," he said. "You’re reminded all the time.”

Another tradition honored at the Latin Mass is the wearing of chapel veils by women. The veils reflect a woman’s special relationship with God, and that she is sacred. Veils are available at St. Joseph Catholic Church for women to wear during Latin Mass.

Like his parishioners, Hathaway enjoys Latin Mass, and he said he is not surprised that people have the desire to worship through traditional Mass.

“It reaches into history. The old rite of course is 1,500 years old. The new rite is over 50. We only have the new rite because it comes from the old rite,” Hathaway said. “It’s like having a tree without the roots. If you don’t have the roots, it’d die. It’s important to have that historical connection.”

Hathaway grew up attending Mass following the new rite. It wasn’t until he was in the seminary in the mid-1990s that he began studying the traditions of the Latin Mass.

Since the Latin Mass has been offered in Rapid City and Spearfish, Hathaway said, attendance has remained steady, but he expects to see the interest and population grow as worshipers desire to return to their roots.

“I enjoy knowing with much certainty that I’m doing God’s will in the way I want it done,” Hathaway said. “It really comes down to that.”

COVID: HOSPITALIZATIONS AT ALL TIME HIGH

Abigail Brett, 15, holds her 6-month-old brother, James Brett, while Isabella Stelzle, left, reviews hymns as the choir prepares for the Sunday morning Mass at the Immaculate Conception Church on Fifth Street in Rapid City. Tiffany Brett, mother of Abigail and James, conducts the choir at the church, which still celebrates the Roman Catholic Mass in Latin.

Cyprian Bruch, 5, and his sister Felicitas, 3, of Sturgis, kneel as communion is distributed last month during Mass at the Immaculate Conception Church on Fifth Street. The Bruch family travels from Sturgis to attend the Catholic Latin Mass at the church.