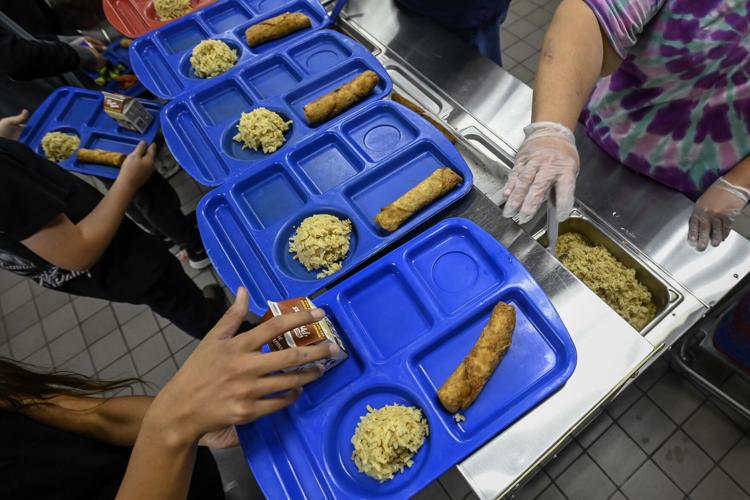 Students at Douglas Middle School go through the school lunch line on Wednesday. The Douglas School District, through the South Dakota Department of Education, is a part of the National School Lunch Program which means meals must meet certain nutritional requirements. 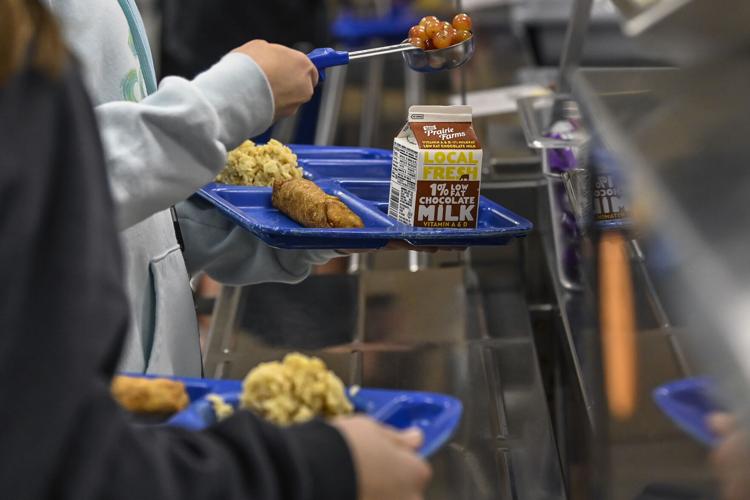 Students at Douglas Middle School fill their trays as they through the school lunch line on Wednesday. 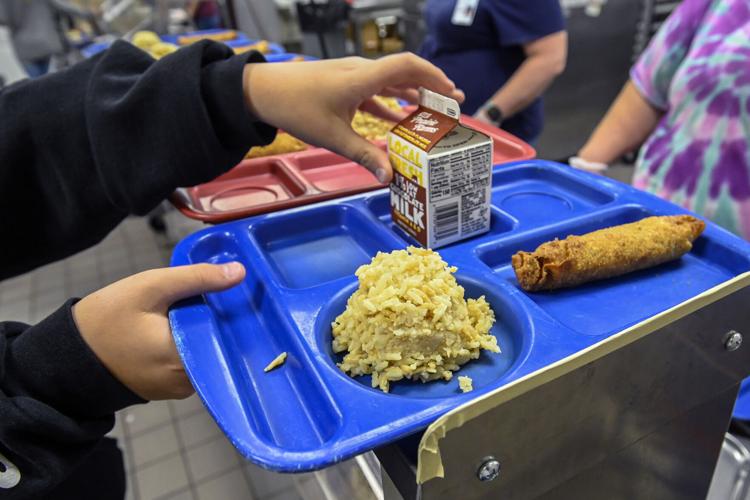 Students at Douglas Middle School in Box Elder, S.D., fill their trays as they go through the lunch line on Wednesday. To be part of the National School Lunch Program, meals must include balanced amounts of fruits, vegetables, grains, proteins and milk, based on federal dietary guidelines.

The multi-faceted and prevalent issue of childhood obesity in South Dakota doesn’t have one simple solution, but local health experts agree — nutrition needs to be de-stigmatized and more accessible, and it’s going to take a state-wide effort.

According to the Centers for Disease Control and Prevention, 14.1% of adolescents grades 9-12 in South Dakota are obese. According to the 2019 CDC data, South Dakota is hovering under the national average of 15.5%. Neighboring states show similar numbers, with North Dakota at 14% and Nebraska at 13.3%. Iowa came in at 17.0%, with CDC data unavailable for Wyoming and Minnesota for 2019.

Special Supplemental Nutrition Program for Women, Infants and Children (WIC) 2020 data showed that 15.8% of children aged 2-4 in South Dakota are obese, which is the highest of all neighboring states. Iowa and North Dakota were close seconds, with 15.6% and 15.4%, respectively. Nebraska showed 14.7%, Minnesota 12.5% and Wyoming with the lowest at 10.6%.

While South Dakota remains below the national average on childhood obesity, the obesity prevalence for children and adolescents has nearly tripled since 1980, according to the South Dakota Schools Height and Weight Report, put out by the South Dakota Department of Health.

The reason for that is difficult to pinpoint, said Lacey McCormack, registered dietitian and research scientist at Avera Research Institute, because it’s a “combination of so many things.”

One thing it is not, she said, is a personal failure on the part of children, parents or caregivers.

“Choices are affected by so many different factors inside and outside of us—including many that are out of our control,” McCormack said.

Robin Burlage, a clinical dietitian with Monument Health in Rapid City, said the contributors to childhood obesity range from level of activity and mental health to picky eating and even epigenetics dating back two generations.

While the facets are complex and varied, Burlage said the most important factor is nutrition, estimating it accounts for 95% of childhood obesity. But South Dakota has a unique obstacle when it comes to obtaining good nutrition — rural areas.

Many studies on childhood obesity are conducted in urban areas, McCormack said, and don’t take into account the limited access to nutritious food that rural areas prevent — many of which exist in South Dakota.

“What happens in urban areas is not what happens in rural ones,” she said. “Our behaviors are shaped by the environment we live in.”

One of the biggest obstacles presented by rural areas is what McCormack referred to as “food deserts,” because of how long it takes to drive to a grocery store. While food deserts are more prevalent in South Dakota’s rural areas, cities like Rapid City and Sioux Falls have the same issue, she said, for similar reasons. Public transportation and walking usually aren’t options for access to grocery stores.

“A lot of our reservations do exist within food deserts where they don’t have access to healthy choice foods,” Knutsen said.

And if they do have access, oftentimes the food is at a higher cost.

“This food access, availability and affordability issue… I think it is one of the things that sets us apart in the rural areas,” she said.

IHS also looks at access to health care, which is another social detriment to health, Knutson said. Many don’t have access to private vehicles and depend on public transportation, tribal or ride sharing options to even get basic health care — sometimes needing to travel for more than an hour to reach those services.

Solutions will require some creativity, McCormack said, and meeting people where they are. They will also require the efforts of the entire state, parents, caregivers, schools, federal programs and research.

Geb Bastian, registered dietitian nutritionist and health state specialist at South Dakota State University, is passionate about nutrition education, and utilizing schools as a resource. He has invested the majority of his research into developing a curriculum to serve educators throughout the country in educating high schoolers about nutrition and physical activity.

The curriculum, called Rev It Up, has already been piloted in New Jersey and Bastian hopes to implement it in South Dakota in the next year or so. For the curriculum’s South Dakota debut, Bastian is also hoping to promote local food.

“We know that South Dakota has lots of grain production, corn, soybean, wheat, as well as beef and dairy, but maybe not as much fruit and vegetables,” Bastian said.

A multi-pronged needs assessment hopes to better understand how South Dakota can provide more fresh fruits and vegetables, he said. Bastian also wants to challenge the perception that healthy eating has to be expensive.

Programs available through SDSU Extension offer education on ways to save money when shopping for food. Taking advantage of canned and frozen food can still be “quite healthy,” he said. Meal planning can also help with affordable shopping to avoid making decisions while at the store, he said.

The approach to education also changes with age, with key influencers shifting as kids get older.

Habits from parents play a large role when children are younger, but once they reach their adolescent and teenage years, their peers play a significant role in their behavior and habits.

“I think that comes down to messaging,” McCormack said. “Messaging has to change with each stage of life.”

Warnings of impending chronic disease later in life are less effective than how they’ll perform in sports or what kids’ friends are doing.

According to the CDC, schools are a “priority setting” for obesity prevention efforts, because they reach the vast majority of school-aged youth.

The state Department of Health tracks childhood obesity in South Dakota through a partnership with schools by means of the South Dakota Schools Height and Weight Report. The department has a goal to reduce the percentage of school-aged children who are obese from 16.4% to 14.5% by 2024 outlined in the 2020-2025 Strategic Plan.

The SD DOH offers additional resources such as the Harvest of the Month program, which focuses on increasing fruit and vegetable consumption in children. Other programs include the Parks RX program, Munch Code, Move Your Way, and fitCare. The SD DOH also runs a website called healthysd.gov, geared towards kids, tweens, teenagers and adults. The website offers monthly menus and downloadable guides for parents on healthy eating tips.

“It teaches us how to incorporate the behavioral and emotional components that might affect an individual's weight and health,” she said. “(It gets) them integrated into our behavioral health along with their primary health care team, so that we have that multidisciplinary approach and we're really reaching the entire person.”

Knutson said incorporating healthy behaviors is not just targeting obesity, but obesity prevention, “and that really begins at birth on forward.”

“It’s much harder to fix something than to prevent something,” she said.

“The earlier we can impact a child’s life with healthy behaviors leads to much higher health in the later ages and stages of their life,” she said.

The statistics show, however, many cases in South Dakota are beyond prevention. Resources exist, but so do unanswered questions.

This is why research is important, McCormack said, and getting participation — to better understand the issues that face our state and how to address them.

“I think that the other thing that is important in moving this work forward is focusing not just on what people are eating and what their weight is, but looking more at that broader environment and how that is shaping the people that live in those environments,” she said.

At the end of the day, McCormack said eating meals should be a pleasant experience for everyone — both parents and children. This relationship with food will help “immensely,” she said, with how children view food and how their relationship with it develops as they grow.

Her number one piece of advice for parents: show unconditional love and support.

“Our kids need to know they’re loved regardless of what they eat, or how they look,” McCormack said.  She also advised avoiding dieting, restriction or shaming of any kind, and to create an environment that facilitates healthy choices.

“If we make the healthy choice the easy choice, we'll be able to nudge people toward healthy behaviors without them having to be an expert on the benefit of making those choices,” she said.

Students at Douglas Middle School go through the school lunch line on Wednesday. The Douglas School District, through the South Dakota Department of Education, is a part of the National School Lunch Program which means meals must meet certain nutritional requirements.

Students at Douglas Middle School fill their trays as they through the school lunch line on Wednesday.

Students at Douglas Middle School in Box Elder, S.D., fill their trays as they go through the lunch line on Wednesday. To be part of the National School Lunch Program, meals must include balanced amounts of fruits, vegetables, grains, proteins and milk, based on federal dietary guidelines.