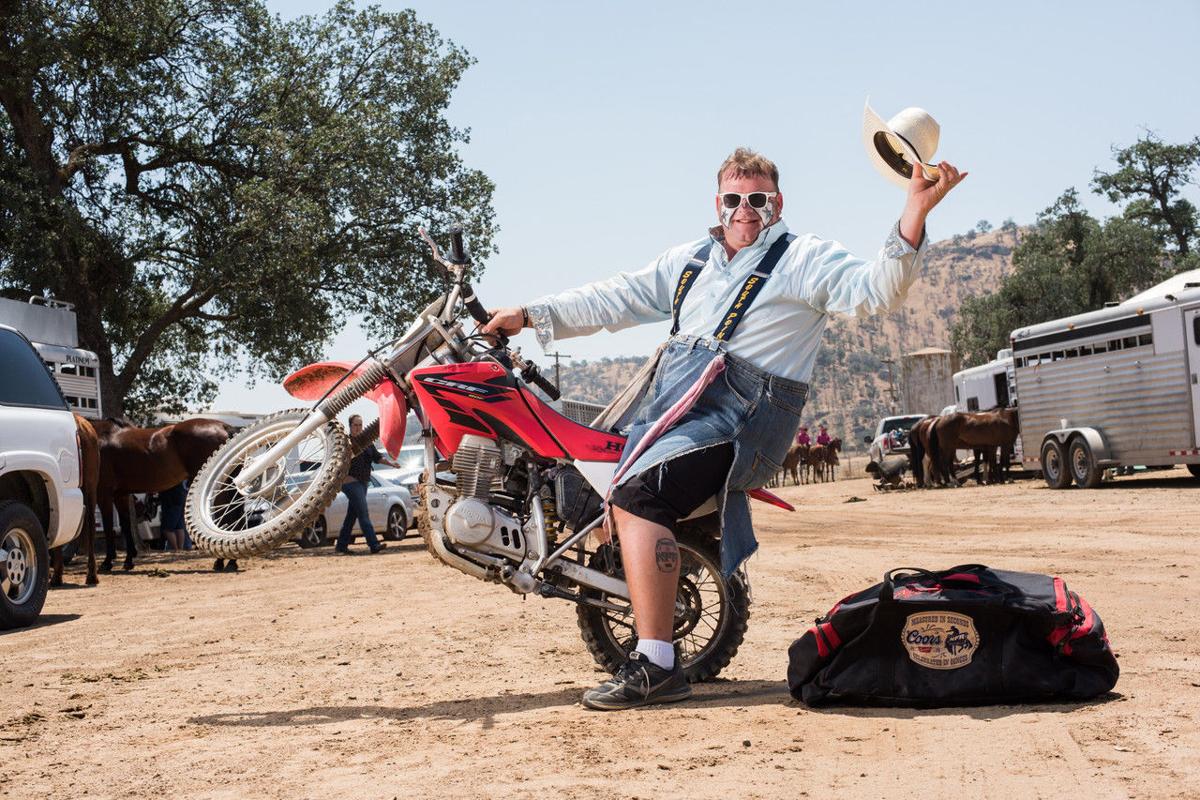 Rodeo clown Justin "Rumpshaker" Rumford tackled a man who ran into the ring during the Range Days Rodeo at the Central States Fair. 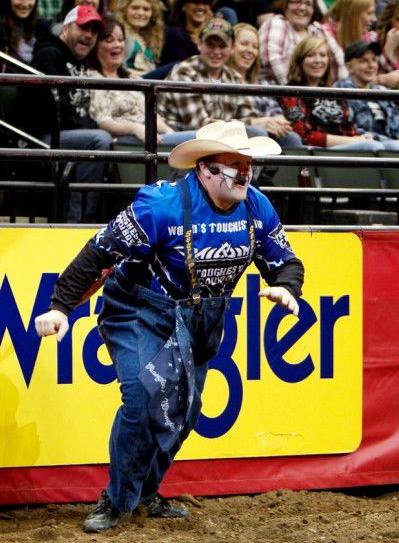 Rodeo clown Justin "Rumpshaker" Rumford is seen in this courtesy image. Rumford, who tips the scales at 275 pounds, tackled a man who jumped into a rodeo ring last week in Rapid City.

A Quinn man who was violently tackled last week by a 275-pound rodeo clown could now get clothes-lined by the long arm of the law.

Edward Mashburn, 35, climbed into the ring not once but twice on the evening of Aug. 25 for some clothed streaking during a performance of the outdoor Range Days Rodeo at the Central States Fair in Rapid City.

Mashburn’s second dash was abruptly halted by a blindside hit from the clown, Justin “Rumpshaker” Rumford, who sprinted across the ring, lowered his shoulder and delivered a crushing blow that contorted Mashburn’s body into a backward "C" as he was pile-driven into the dirt.

The tackle was witnessed by about 2,000 spectators and has been a popular topic of local conversation ever since. Mashburn was cited for disorderly conduct by the Pennington County Sheriff’s Office and is free while he awaits his court date.

Had it not been for Rumford's quick thinking and surprisingly fleet feet, a criminal conviction might have been the least of Mashburn's worries. The clown probably saved Mashburn from being kicked or trampled by several horses that were circling the arena at the time of the tackle, including a wild bucking horse.

But, said John Kaiser, the fair’s operations manager, it’s not entirely clear that Mashburn got the better of the two scenarios.

“I think he would’ve rather had the horse, because the clown laid on a pretty good lick,” Kaiser said.

The bizarre series of events had its genesis just before the evening rodeo, when Mashburn was at a friend's house in Rapid City, got into a fight and suffered an inch-long stab wound on one of his upper legs. That's according to Mashburn, who agreed to be interviewed by phone for this story after being tracked down via Facebook.

Though many rodeo spectators no doubt assumed Mashburn was drunk or high on drugs, he denied that. He has struggled in the past with symptoms connected to a possible diagnosis of hypoglycemia, he said, and he suspects low blood sugar may have been a factor in his decision-making. Throw in the mental and physical effects of the stab wound and his self-described "adrenaline junkie" tendencies, and Mashburn said he "wasn't in a right frame of mind."

When Mashburn arrived at the rodeo, he went to the fence at ringside. There, amid a chair seating area, he climbed nearly to the top of the fence and made a scene by shouting and gesturing until a member of the security staff coaxed him down. But he soon climbed the fence again during a break in the rodeo action and jumped down on the other side.

Once inside the ring, Mashburn ran willy-nilly across the dirt as his pants fell below his buttocks, exposing his underwear. Within seconds, he hopped back over the fence and ran off to parts unknown.

Members of the security staff were unable to catch Mashburn, Kaiser said, so a radio call went out across the fairgrounds advising others to be on the lookout.

Rumford, meanwhile, stood dumbfounded in the ring before cracking a joke into his microphone.

“The next guy that jumps in here is going to get tackled by the clown!” he said.

The quip drew laughter from the audience, which had already heard several self-deprecating remarks from Rumford about his girth.

In a later phone interview from his home in Oklahoma, Rumford said the remark was not intended as foreshadowing.

“That’s never happened to me before, and so I was just joking,” he said. “But when he came back in, I thought, ‘Man, I better really do it.’”

Nobody knows where Mashburn went after his first foray in the ring, including Mashburn himself. He only remembers the second time, he said, and was surprised to hear that he'd run in and out of the ring one other time. He attributed the memory loss to the possibility of a concussion from the tackle.

Mashburn’s second scamper occurred as a saddle-bronc ride was ending. He appeared from the west end of the arena and ran eastward between the ring and the grandstand before he veered toward the fence and began to climb it. Someone tried to pull him down, but he jumped into the ring and ran across it as a bucking horse and some mounted pick-up men circled the ring behind him.

Mashburn stopped in front of the bucking chutes, where he appeared to be gesturing and yelling at the cowboys behind it. Perhaps 15 yards behind Mashburn and slightly to his left, Rumford — who was an all-state high school linebacker and is a former steer wrestler — drew a visual bead on Mashburn’s back and took off on a dead sprint, looking like a freight train headed for a car stalled on the tracks.

When Rumford delivered the blindside sack and Mashburn went down like a defenseless quarterback, the crowd erupted in a mix of groans, gasps and cheers.

Mashburn said the hit was every bit as jarring as it looked.

"It was like I was getting hit by a Mack truck," he said. "I thought I'd been hit by about three people."

Rumford explained that once he got rolling, there was no slowing down.

Rumford said the reason he acted so decisively was because he feared injuries to Mashburn and others if a collision ensued with the horses in the ring, and he also feared Mashburn may have been armed with a weapon and ill intent. That latter fear proved unfounded.

“This day and age we live in, you just never know,” Rumford said. “I guess it’s always in the back of your mind when you’re in a large place with a lot of people.”

Rumford said Mashburn tried to get away as soon as they hit the ground and then again as members of the event staff grabbed Mashburn and hauled him out of the arena.

Kaiser said Mashburn was taken to a quiet spot on the fairgrounds. Sheriff's deputies soon arrived and issued Mashburn a ticket for disorderly conduct, and then sent him away with a companion who'd accompanied him to the rodeo. Mashburn said he went to Rapid City Regional Hospital, where he got staples in his leg to close the stab wound from earlier in the evening. He did not press charges, he said, against the friend who stabbed him.

Kaiser said it’s too early to say whether Mashburn’s actions will result in changes to fairground operations, such as heightened security or a bigger law-enforcement presence at rodeos, but Kaiser expects some discussion about that. Traditionally, he said, the security force at the fair has focused mostly on the midway area.

Rodeogoers walked away from the event with an unforgettable memory, and Kaiser was supportive of Rumford’s actions, but fair organizers are not eager to see anyone else endanger themselves or others by jumping into a rodeo ring.

“As much as people love seeing a clown lay a lick like that on a guy,” Kaiser said, “it’s something we hope doesn’t happen again.”

Mashburn said he has no plans for a repeat performance. The Alabama native, who said he's working as a ranch hand near Quinn, said he was "stove up" for about a week after the tackle. His necked moved a little funny, he said, and his ribs felt like they might have been "floating a little bit."

When the time comes to face a judge on the disorderly conduct charge, Mashburn said, he'll accept his punishment and move on.

"I think my thirst for getting tackled by a rodeo clown has been quenched," he said.

"It was like I was getting hit by a Mack truck. I thought I'd been hit by about three people." — Edward Mashburn

Clown who made famous tackle is back in Rapid City

Rodeo clown Justin "Rumpshaker" Rumford tackled a man who ran into the ring during the Range Days Rodeo at the Central States Fair.

Rodeo clown Justin "Rumpshaker" Rumford is seen in this courtesy image. Rumford, who tips the scales at 275 pounds, tackled a man who jumped into a rodeo ring last week in Rapid City.