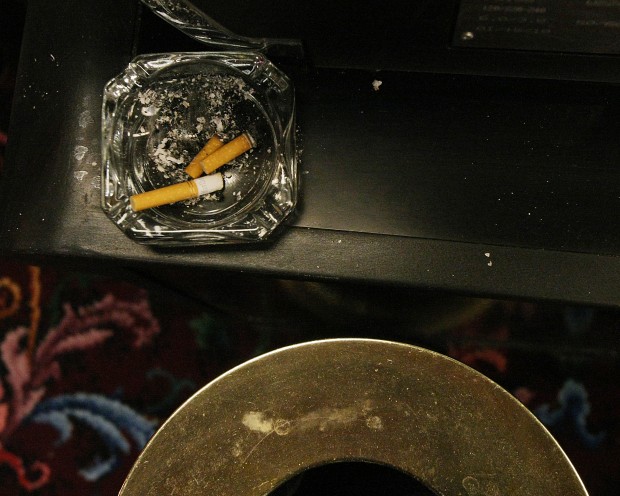 A used ashtray inside the Silverado-Franklin Gaming Complex in Deadwood on Friday, October 8, 2010. (Aaron Rosenblatt/Journal staff) 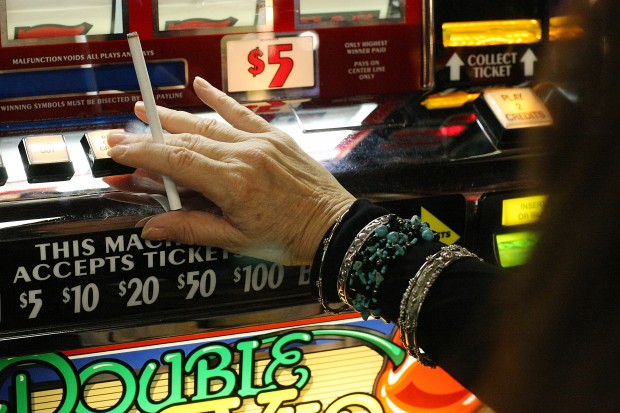 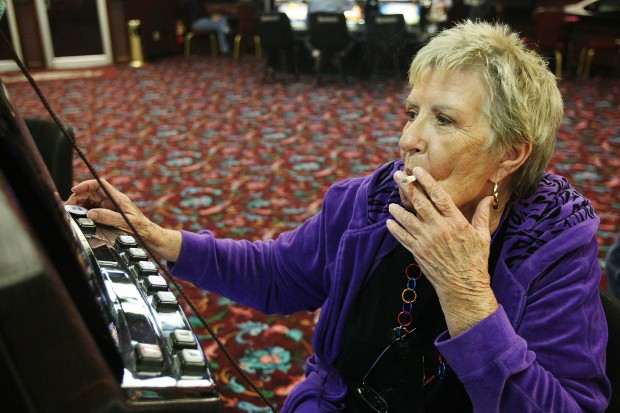 Pat Hubbart of Seabrook, Texas, smokes a Misty 120 Menthol Lite while playing a slot machine at the Silverado-Franklin Gaming Complex in Deadwood on Friday, October 8, 2010. If Law 12 passes during state elections this November, people will not be allowed to smoke indoors, including inside casinos. Hubbart says she only smokes when gambling. (Aaron Rosenblatt/Journal staff) 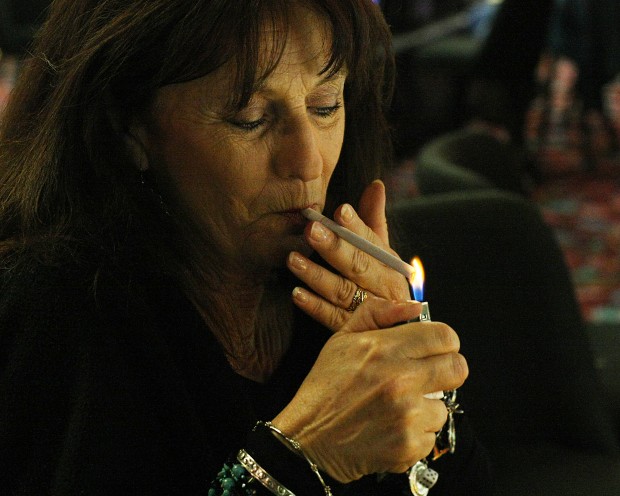 It has been a long road to the ballot box for the statewide smoking ban.

From the state Legislature and Gov. Mike Rounds’ desk in early 2009, to a successful petition drive that was overturned when the state threw out thousands of signatures, to a court battle that in late 2009 finally

allowed a public vote to move forward, the 21-month journey is nearing an end.

On Nov. 2, it will be up to South Dakotans to decide whether to snuff out smoking indoors in all public places, including bars, restaurants, video lottery establishments and Deadwood casinos.

Proponents say the ban is necessary to protect thousands of workers and patrons at alcohol-serving establishments from the dangers of secondhand smoke, a known carcinogen according to federal health agencies.

“We have thousands of people who go to work and are breathing secondhand smoke for eight to 10 hours. That can all be avoided,” said Dr. Allen Nord, chairman of the South Dakota Tobacco-Free Kids Network. “No one should have to make a choice between a good job and breathing clean air.”

But opponents, led by a Sioux Falls bar owner, say the ban would trample the property rights of business owners and endanger the state’s revenue from Deadwood casinos and statewide video lottery, which poured $122.5 million into the coffers of state and local governments in fiscal 2010.

“It’s become an issue that’s more about freedom and the rights of people,” said Don Rose, spokesman for Citizens for Individual Freedom, which referred the ban to a vote. “My place is owned by me. You have the choice to go in there, and I have the choice to allow smoking.”

If approved, Referred Law 12 would extend the state’s existing smoking ban to all workplaces, closing a loophole for establishments that serve alcohol. No other places of employment, including public facilities and other private businesses, have been allowed to permit smoking indoors since 2002.

The only exceptions would be for cigar bars that were in business on Jan. 1, 2009, tobacco shops and designated hotel rooms. Violations of the ban would be treated as a petty offense.

“It’s inappropriate for us to

acknowledge the danger of

secondhand smoke for lawyers and accountants but not for the bartender or the video lottery clerk,” said Jennifer Stalley, treasurer for the Yes on 12 campaign.

Opponents see the law’s expansion as a further intrusion into private enterprise. Choice — of property owners to allow smoking in their own businesses, of employees to apply for jobs in smoking establishments and of patrons to enter smoky bars or casinos — is one of their central arguments.

“It’s another move to further infringe on our freedoms,” said Gordon Howie, a former state senator and tea party candidate for governor. “Where will we go next? Will we be told we can’t make our own choices on whether to smoke in our automobiles or in our own homes?”

Rose, who owns Shenanigan’s Pub in Sioux Falls and Tea, said it is simply not the role of government to tell business owners who have invested millions into their establishments how to operate.

“They own their buildings or they pay rent. How can someone come in there and say you own this building, but we’re not going to let you smoke in it?” Rose said. “That’s not right.”

But employers do not have an “unfettered right” to determine the working conditions of their employees either, Stalley said.

“I don’t think it’s realistic that people have a large number of choices where to work. There are not enough jobs to just pick and choose from in South Dakota,” Stalley said.

Clayton Hieb of Rapid City was a smoker for most of his adult life but quit 13 years ago after watching five of his family members die of tobacco-related diseases. The rights of smokers and business owners only extend so far, he said.

Still, Howie said, no one is forcing anyone to go into an establishment that allows smoking.

“Regardless of how they feel about smoke, we can make choices not to patronize those businesses. And quite frankly, I do, because I don’t appreciate secondhand or firsthand smoke,” he said. “But we need to take a stand for freedom.”

really as dangerous as Hieb and others would say.

Rose, who opened his pub in Sioux Falls’ Empire Mall in 1986, said not one of his long-term employees has died of complications of secondhand smoke exposure.

But much of the state’s medical community supports the ban.

Health insurance providers DakotaCare and Wellmark Blue Cross Blue Shield of South Dakota and organizations including the American Cancer Society, Black Hills Center for American Indian Health and the 1,900 members of the South Dakota State Medical Association are among its endorsers.

Nord, a primary care physician in Rapid City, said anyone who doubts the danger of secondhand smoke should read for themselves a 2006 report on the subject from the country’s top doctor at the time, Richard Carmona, surgeon general under President George W. Bush.

“The Health Consequences of Involuntary Exposure to Tobacco Smoke: A Report of the Surgeon General” describes secondhand smoke as an “alarming public health hazard” and strengthens conclusions first made by the surgeon general in 1986.

“Secondhand smoke causes premature death and disease in children and adults who do not smoke,” the report said.

“The scientific evidence indicates that there is no risk-free level of exposure to secondhand smoke,” the report said.

And it isn’t just the surgeon general raising the alarm about secondhand smoke, supporters said.

As part of the Yes on 12 campaign, Hieb, a volunteer, has compiled “Clayton’s Box of Evidence,” which contains thousands of pages of scientific studies that draw similar conclusions. Included are reports from the World Health Organization, National Institutes of Health, British Medical Journal and the International Agency for Research on Cancer.

In 1992, the U.S. Environmental Protection Agency classified “environmental tobacco smoke,” or secondhand smoke, as a Group A carcinogen, its warning for proven cancer-causing agents.

Secondhand smoke, considered as both the smoke being exhaled and the unfiltered smoke coming off the end of a burning cigarette, has been identified to contain more than 4,000 chemicals.  Among them are more than 50 known carcinogens, including arsenic, benzene, cadmium, ethylene oxide, polonium-210 and vinyl chloride, according to the National Cancer Institute.

“What I tell people is secondhand smoke is way more dangerous than we ever suspected,” Nord said.

South Dakota would not be the first state with commercial gambling and video lottery to ban smoking.  And if the experience of other states — including Colorado, Montana and Oregon — are any indication, South Dakota could lose between 10 percent and 20 percent of its gambling revenue in the first year of a smoking ban.

Howie, the former state senator, questioned whether 2010 was the right time to gamble with state revenue. State budget officials have projected that the state could be staring down an $80 million deficit in fiscal 2012.

“This doesn’t seem like the right time to be doing things that would make our economic plight even worse and cause our legislators to have to look at cutting services or increasing taxes,” Howie said.

Proponents acknowledge there could be a “slight” decline in the state’s gambling revenue with a smoking ban, but they argue that disposable income will enter the economy in different ways and that the state will actually save money in health care expenses. In their mind, health concerns trump any others.

“It’s not as clear cut as saying 20 percent out of our pockets, we’re doomed,” Stalley said.

Those in the gambling industry have come out against the smoking ban.

Tom Nelson, executive director of the Deadwood Gaming Association, said there have been dozens of studies in other jurisdictions and the results were the same: Smoking bans hurt revenue.

Time away from the machines means less money going into them, and for whatever reason, smoking and gambling just go together in people’s minds.

“The gaming industry is an entertainment industry. They go out to relax,” Nelson said. “You take away one of those elements and people tend to stay home.”

In Colorado, which banned smoking in 2008, the state’s gambling taxes were down $13 million, or 12 percent, in the smoking ban’s first full year, according to the Colorado Division of Gaming.

In fiscal 2010, tax collections appeared to rebound to near pre-smoking ban levels, up $12.8 million over fiscal 2009.

Lois Rice, executive director of the Colorado Gaming Association, said much of the recovery can be attributed to changes that were already in motion when the ban went into effect. In July 2009, bet limits were raised to $100 from $5, casino hours were expanded to 24 hours and craps and roulette were added.

“It lessened the pain,” Rice said.

Casinos have also tried to

accommodate smokers with outdoor smoking lounges that are heated and have televisions and other comforts, Rice said. Some are configured to make it impossible for smokers to leave the premises without first passing through the casino floor again.

South Dakota’s video lottery industry has stayed largely quiet on the smoking ban. Larry Mann, a lobbyist who represents video lottery interests and led the petition drive, declined to comment for this story.

In 2009, Montana and Oregon saw losses that mirror those in states that allow casino gambling.

Montana’s smoking ban was extended to bars and taverns on Oct. 1, 2009, and in fiscal 2010 the state’s video gambling revenue was down $9.7 million, or 16 percent, according to the state Department of Justice’s Gambling Control Division. There, the state receives 15 percent of gross machine income; South Dakota receives 50 percent.

“We need some more experience with it, but the implementation of the smoking ban will have an impact,” Rick Ask, who administers the program in Montana, said.

But Ask agreed with Oregon Lottery officials that it was impossible to separate whether it was the economy or the smoking ban that led to the losses.

Chuck Baumann, spokesman for the Oregon Lottery, said other games, including Powerball and scratch cards, have also struggled. Oregon’s unemployment rate is currently among the nation’s highest, which he said consequently affects discretionary income for nonessential expenditures.

“It’s too hard to figure out,” Baumann said of a breakdown of economic and smoking ban losses. “There are too many variables. You can’t separate it.”

Smoking regulations in the region

South Dakota would not be the only state in the region to ban smoking indoors in all public places. According to the American Lung Association…

GAMBLING: Opponents worried that state will lose millions in revenue.

A used ashtray inside the Silverado-Franklin Gaming Complex in Deadwood on Friday, October 8, 2010. (Aaron Rosenblatt/Journal staff)

Pat Hubbart of Seabrook, Texas, smokes a Misty 120 Menthol Lite while playing a slot machine at the Silverado-Franklin Gaming Complex in Deadwood on Friday, October 8, 2010. If Law 12 passes during state elections this November, people will not be allowed to smoke indoors, including inside casinos. Hubbart says she only smokes when gambling. (Aaron Rosenblatt/Journal staff)