The site of a potential uranium mine in southwest South Dakota will not have to be surveyed for cultural resources of concern to the Oglala Sioux Tribe if a decision issued Thursday by a panel of judges is upheld.

A lawyer for the tribe said it is evaluating the decision before deciding whether to file an appeal prior to a Jan. 6 deadline.

The three judges with the U.S. Atomic Safety and Licensing Board wrote in their decision that the U.S. Nuclear Regulatory Commission tried diligently to cooperate with the tribe to conduct an on-the-ground survey for Native American burials, artifacts and other historical and cultural resources. The judges also wrote that the commission was justified in giving up when it became apparent the tribe would not cooperate.

The judges acknowledged the federal government’s obligation to obey the National Environmental Policy Act, known by the acronym NEPA, which the judges said requires a “hard look” at the environmental impact of activities licensed by the government.

“Those considerations are not, however, absolutes,” the judges wrote, “to the degree that they preclude a federal agency from taking action in the exercise of its NEPA responsibilities once a reasonable effort has been made to procure the cooperation and input from a tribe.”

The decision, unless overruled on appeal to the five members of the Nuclear Regulatory Commission or later in the courts, will free up the mine project's NRC license from the last contention that was attached to it. 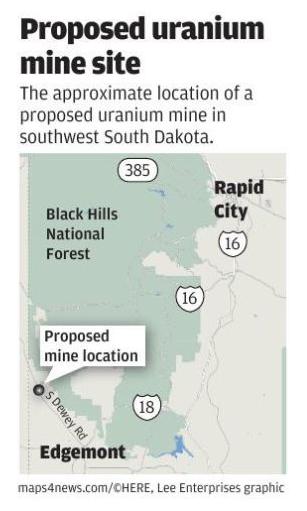 But the company proposing the mine — Powertech, a subsidiary of Azarga Uranium in Canada — still has several more regulatory approvals to obtain before it can begin mining at the proposed site near Edgemont. Those approvals include licenses and permits from the U.S. Environmental Protection Agency, which are under review, and from the South Dakota Department of Environment and Natural Resources, which has its review on hold until the federal agencies complete their work.

Azarga Uranium's president and CEO, Blake Steele, said in a news release Friday that the decision on the survey contention was a "monumental achievement for the company."

"This decision represents a key risk reduction event and a significant step towards realizing the full value of the Dewey Burdock Project," Steele said in the release.

Mark Hollenbeck, an Edgemont-area rancher and project manager for Azarga, said the Oglala Sioux Tribe was carrying out a "death by delay" strategy against the mine. He said other Great Plains tribes with connections to the Black Hills conducted their own surveys at the proposed mine site in 2013, at the company's invitation and with its assistance. Hollenbeck said the company invited about 30 tribes, including the Oglala Sioux. Those who came to the site included the Northern Cheyenne, Santee Sioux, Crow Creek Sioux, Northern Arapaho, Turtle Mountain Band of Chippewa, and the Cheyenne and Arapaho tribes of Oklahoma.

"The Oglala Sioux refused because they did not want to take a chance of helping the project," Hollenbeck said Friday by phone.

Neither Oglala Sioux Tribe President Julian Bear Runner nor a designated spokesman for the tribe immediately responded to messages Friday from the Journal. The tribe's pro bono attorney, Jeff Parsons, of the Western Mining Action Project in the Denver area, disputed Hollenbeck's characterization.

"The tribe's been ready, willing and able to engage in a survey from the beginning," Parsons said Friday by phone. "It's Powertech and the NRC who denied the tribe the resources necessary to finish the job."

The proposed mine location is 13 miles northwest of Edgemont, near the abandoned community of Burdock and the hamlet of Dewey along the southwest edge of the Black Hills, in an area that was mined extensively for uranium from the 1950s to the 1970s.

The Oglala Sioux Tribe’s Pine Ridge Reservation is about 50 miles east of the proposed mine, but the mine site, along with the Black Hills and all of western South Dakota, was formerly part of the Great Sioux Reservation.

Uranium mined from Edgemont in past decades was for American nuclear weapons. Powertech wants to mine uranium for use in nuclear power plants.

Instead of open pits and tunnels, which were used to mine Edgemont-area uranium in the past, Powertech would use “in situ” mining, which is a Latin phrase meaning “in the original place.” The company would drill wells across a 17-square-mile area to inject a water-based solution underground, dissolve the uranium, and draw it up to the surface for processing.

The water would come from local aquifers and would be treated and injected back underground after mining. Opponents of the project fear it could pollute underground water sources.

Members of local environmental groups protested the decision Friday on the corner of Fifth and Omaha streets in Rapid City. Lilias Jarding, of the Black Hills Clean Water Alliance and an organizer of the protest, said, "We think it is critical that people stand up to these mining companies and tell officials that water is our most precious resource."

The project has been a source of controversy since at least 2009, when Powertech applied for a license from the Nuclear Regulatory Commission. The commission issued the license in 2014 even though the lack of an adequate cultural resources survey in connection with the Oglala Sioux Tribe remained an unresolved contention at the time.

The Nuclear Regulatory Commission decided to leave the license in effect while seeking to resolve the contention. The tribe challenged that decision and won a favorable ruling in 2018 from the U.S. Court of Appeals for the District of Columbia.

The court said the NRC violated the National Environmental Policy Act by leaving Powertech’s license in effect without a cultural-resources survey. Yet the court did not vacate Powertech’s license. Instead, the court remanded the matter back to the NRC for further proceedings.

Since then, according to the NRC, efforts to negotiate a site-survey methodology with the tribe have been fruitless. The dispute is multifaceted and has included arguments about the appropriate contractor, the need for interviews with tribal elders, the cost and funding of the survey, the inclusion of additional tribes, and other factors.

In April, the NRC declared an impasse and asked the Atomic Safety and Licensing Board to settle the dispute, which led to August hearings in Rapid City and ultimately to the decision issued Thursday.

In the decision, the judges predicted that the terms of an existing programmatic agreement "will provide protection for onsite cultural resources as they may be encountered during facility construction and operation."

One day ahead of a public hearing in Rapid City about a Nuclear Regulatory Commission license for a proposed uranium mine near Edgemont, anoth…

People who worked at a uranium ore-buying station in the 1950s in Edgemont may have been exposed to materials that made them sick, and the gov…

A hearing has been scheduled in Rapid City as part of the long-running regulatory review of a proposed uranium mine near Edgemont.

The U.S. Nuclear Regulatory Commission has decided to uphold a company’s license to mine for uranium near Edgemont, even though a federal judg…

Uranium companies merge in pursuit of Edgemont-area mine

The corporation that wants to mine for uranium in southwest South Dakota has strengthened itself with a merger agreement, according to a Monda…