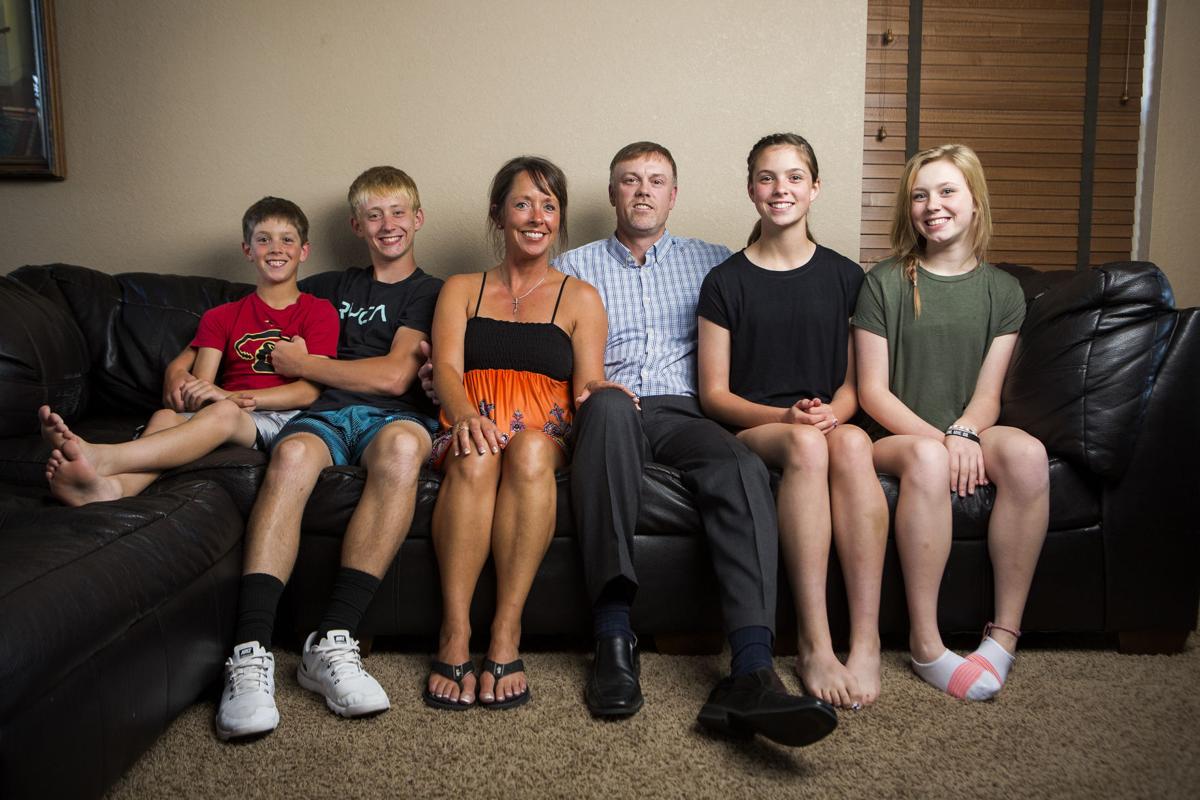 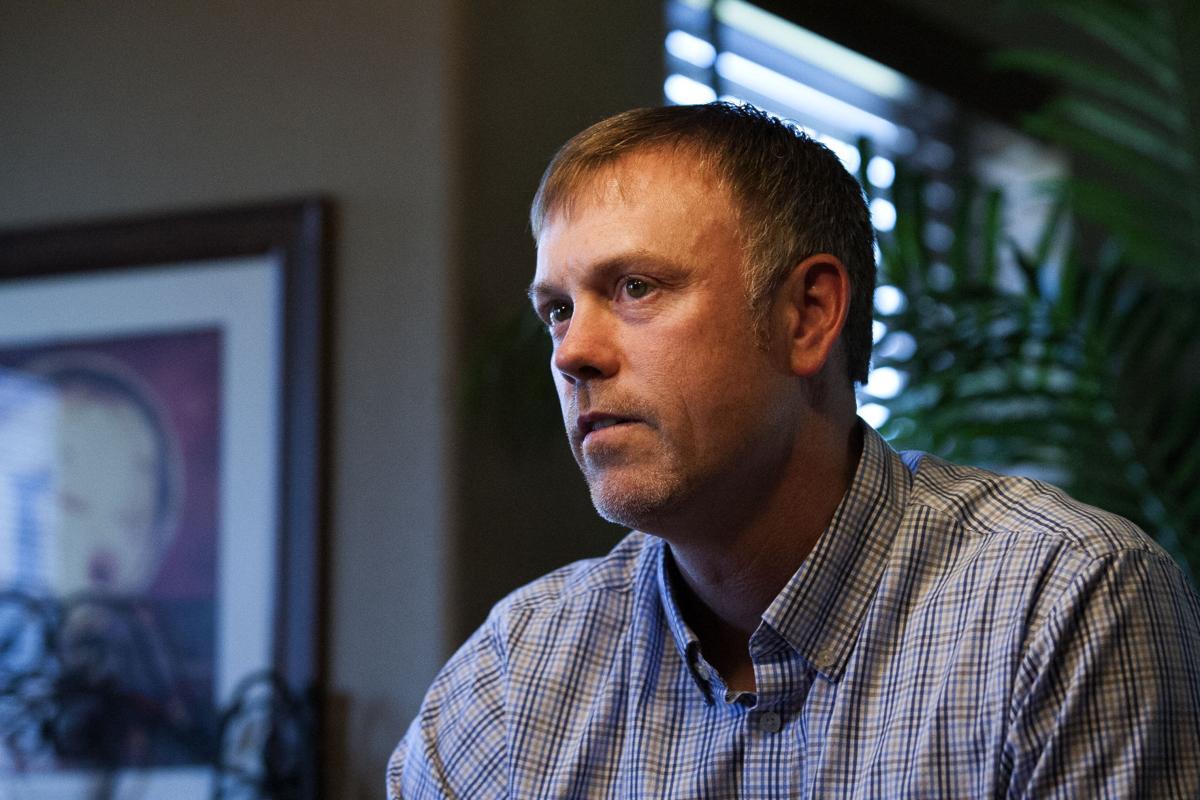 Cody Young talks about dealing with the rare sleep disorder Kleine-Levin Syndrome in his Rapid City home on June 23. 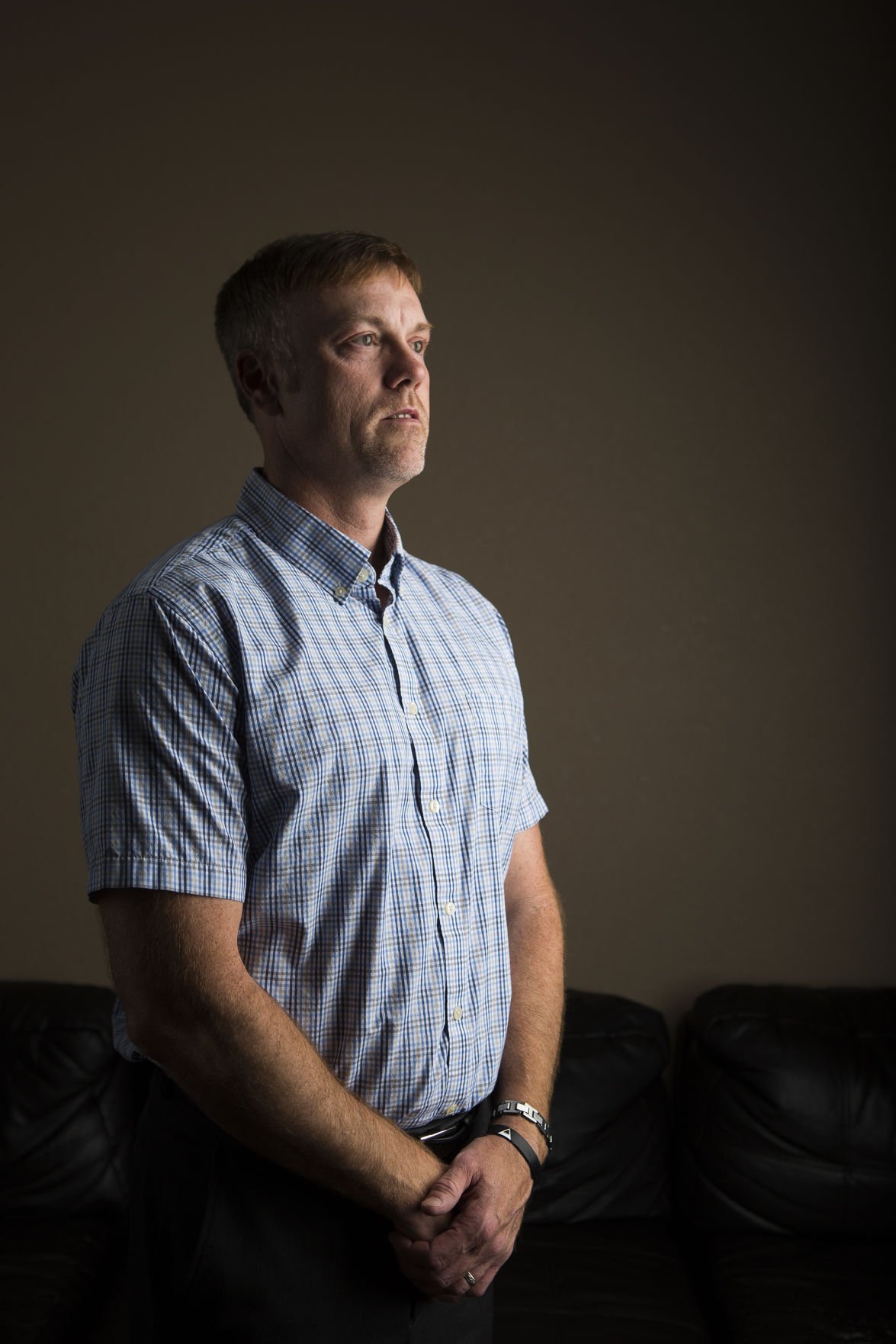 Katherine Young thought her family was going to lose everything when her husband practically hibernated for three weeks. Within several days in July 2005, she moved all their savings into his business just to ensure it would keep going while he slept.

Her husband Cody, a Rapid City physical therapist, owns a clinic and sees 40-50 patients a week. But for 24 days that July, all he did was sleep, eat and go to the bathroom. Mainly, the 36-year-old slept for 22 hours a day.

Most of his life, people thought Cody Young was either lazy, depressed or just odd. Three to five times a year, for about two weeks each time, he would sleep nearly round-the-clock. During the few hours he was awake, he was a different person.

He was not his usual happy and friendly self. He spoke very little, did not like being around people and shied away from noise and light. He devoured food, table manners forgotten. After nine to 14 days in this mode, he would slip back to the original Cody Young. And he wouldn’t remember some things that happened during those slumberous days.

These incidents, which usually followed flu-like symptoms, started when Cody was a 14-year-old in Ohio. His parents took him to several doctors, including specialists at the famed Cleveland Clinic. The clinic initially diagnosed him with separation anxiety and then clinical depression, said Cody’s mother, Cherlynn Young.

For a year in high school, he was sent to counseling. Over the years, he has been prescribed various anti-depressants or mood stabilizers, such as Depakote, Desyrel and lithium. But the sleep episodes continued.

“I did never buy into the depression per se, but I just went along. ‘Hey, you know, this is the best they can do,’” Cody, now 47, said in an interview. He explained that depression was not the root, but a byproduct of the episodes in which he could not function normally.

“That’s tough when you’re not able to put your finger on something. You know something’s wrong, but nobody can find out what it is. Then you start to question in your mind whether it’s real.”

A satisfactory explanation for his condition remained elusive for two decades. Then on a phone call in the fall of 2001, a childhood friend of Cody’s told his wife to look up something called the Kleine-Levin Syndrome.

Kat, as friends call her, went online and started reading about a man who had been diagnosed with the disorder. The stranger’s symptoms so mirrored her husband’s behavior that she started crying.

“I was so relieved that I wasn’t the only one, that this wasn’t an isolated incident,” Kat, 46, said, sitting face-to-face with her husband at their dining table. “There is something that we can call this, so maybe there’s treatment, there’s help for it.”

Kleine-Levin Syndrome, also known as the Sleeping Beauty syndrome and the Rip Van Winkle disease, is a rare sleep disorder. It’s literally one — or two — in a million. Only around 500 cases worldwide have been reported in medical literature, according to experts.

Its exact cause is unknown though it’s suspected to be an autoimmune disorder, said Dr. Clete Kushida, medical director of the Stanford Sleep Medicine Center. The clinic belongs within the Stanford Center for Sleep Sciences and Medicine, which is doing a long-term Kleine-Levin study. (An autoimmune disorder occurs when the body’s immune system mistakenly attacks healthy tissue for unknown reasons.)

A flu-like illness or upper respiratory infection, as well as anesthesia, alcohol use and head trauma, have been reported to trigger KLS, Kushida said in an email.

The disease primarily affects adolescent males and is found in men more often than women, according to information published by the National Organization for Rare Disorders. Genetically inherited Kleine-Levin is rare, about five percent of recorded cases, said Kushida.

Episodes become less frequent as a person ages, which is Cody’s experience. He had one last April; prior to that was in 2011 and 2005.

There is no definitive treatment for the disorder, Kushida said, but stimulants and antidepressants may be effective for some of the symptoms. Cody just tries to lead a holistic healthy lifestyle, having declined shock therapy that the Mayo Clinic suggested some 10 years ago.

Since 2008, the Stanford Center for Sleep Sciences and Medicine has been collecting data that aims to identify biological factors associated with the disease, said Eileen Leary, the senior manager of clinical research.

At least 200 people with Kleine-Levin are participating in the study, including Cody. Participants answer a questionnaire and submit a blood sample. The latest findings are scheduled to be published by next year.

Kushida believes more people out there have KLS but their symptoms are misdiagnosed by medical professionals not familiar with the condition. Sleep specialists and neurologists are the people most likely to recognize it, he said.

Dr. Scott Finkbeiner, an internist, didn’t hear about the Kleine-Levin Syndrome until he was out of medical school. He was doing research on sleep disorders when he encountered it. He and Cody had been buddies since they were 18-year-olds in Belle Fourche, then college roommates in Bowling Green, Ohio. The symptoms associated with KLS struck Finkbeiner. He knew he finally had a name for the mysterious condition that plagued his best friend, and he told Kat.

Finkbeiner saw Cody strive to make up for missed time in school. He saw Cody lose friends and girlfriends, because people got confused and upset by what appeared to be his dual personalities.

“He’s such an outgoing, happy, friendly person. And then literally all of a sudden, he would disappear for a week or two weeks at a time.“ Finkbeiner, now a doctor in Arizona, said in a phone interview. “There’s so many people that did not understand it.”

Cody believes Kleine-Levin was the primary reason his first marriage crumbled. The union lasted only nine months during his mid-20s.

The impact of an illness

Kat experiences emotional stress whenever her husband is “under,” but takes it on as their biggest challenge as a couple. She becomes a single parent to their four children and a caregiver to Cody. She gets hurt by his seemingly cold and self-centered demeanor, no matter how many times she has lived with his episodes.

Cody’s eyes, she said, become distant and vacant, as if he were an impostor.

But Kat’s biggest worry is that the man she describes as her soulmate will not come back.

“I always get to the point where I sit in my garage and I’ll smoke a cigarette, and I’ll drink a wine. And I’m like, ‘OK, God, I cannot take this anymore.’” After her anguished prayers, Kat said she always feels the burden lift.

Kat and Cody’s parents estimate that he has spent seven years of his life sleeping.

Cody and Kat’s two sons and two daughters have also learned to cope with his episodes. During these times, they try to give family members extra support.

“We all get the idea that he’s out and that we’re gonna need to pull together,” J.C., the 18-year-old eldest said, with his parents and siblings gathered around the dining room.

“Once you’ve dealt with it a couple times it gets easier,” he said, “knowing that he’s not gonna die, or anything, from it.”

The youngest child, however, was too small to remember Cody’s past episodes. Peyton, 11, came home from school one day in April and panicked when he could not wake his dad who was lying on the couch.

“It scared me,” he said in a whisper. Kat, who noticed that the boy’s heart was pounding, explained that his dad was just in a “deep sleep.”

Past, future and present

After the Youngs first learned about Kleine-Levin, Kat scrambled to find a doctor who could confirm their hunch. She called about 20 doctors in South Dakota and Colorado before she found someone, at Black Hills Neurology, who knew about the disease.

That person, Dr. Brian Tschida, described Cody’s symptoms as “pretty much a textbook Kleine-Levin.” The neurology and sleep specialist, now with Rapid City Regional Hospital, said there is no test that can confirm KLS, so diagnosing it involves ruling out other diseases that could account for the symptoms.

Few people know that Cody has Kleine-Levin Syndrome. His family decided to tell their story, hoping it can help someone who is dealing with a mysterious illness. Kat also wants to shine a light on a disease that is difficult to explain.

This October, in conjunction with National Physical Therapy Month, Cody’s clinic plans to mark what will be its annual KLS Awareness Month.

After 30 years of living with a largely unknown disease, Cody believes Kleine-Levin has pushed him to transcend his weaknesses and fulfill his goals.

People are amazed when they find out Cody has KLS, said his younger brother J.D. Young, citing Cody's accomplishments as an athlete, student and medical professional.

Cody’s family, friends and patients describe him as an especially compassionate person and therapist. He believes this is a result of the pain and suffering he has experienced from having KLS.

“Maybe even what has occurred to me is a blessing for some strange reason,” he said. “There’s a reason why I have this … God has a plan for it, and I try to just believe.”

Cody Young talks about dealing with the rare sleep disorder Kleine-Levin Syndrome in his Rapid City home on June 23.