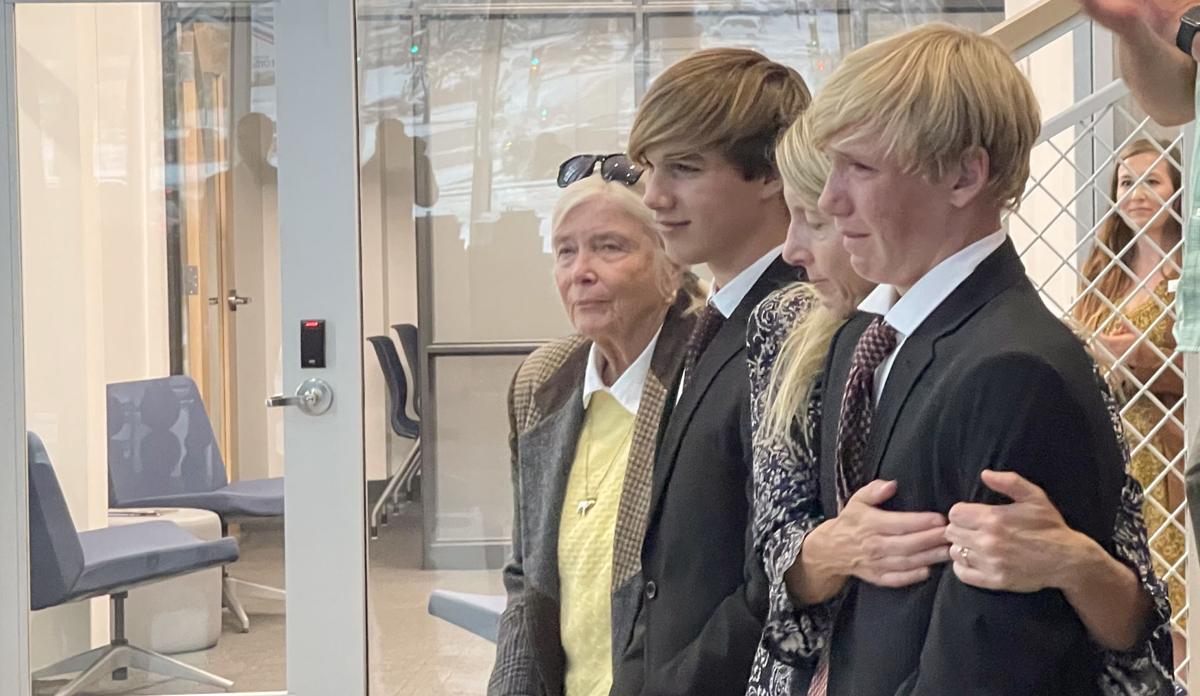 The family of David Lust comforts each other Tuesday after an announcement that the main building of the Ascent Innovation Campus in downtown Rapid City will be named the David Lust Accelerator Building. 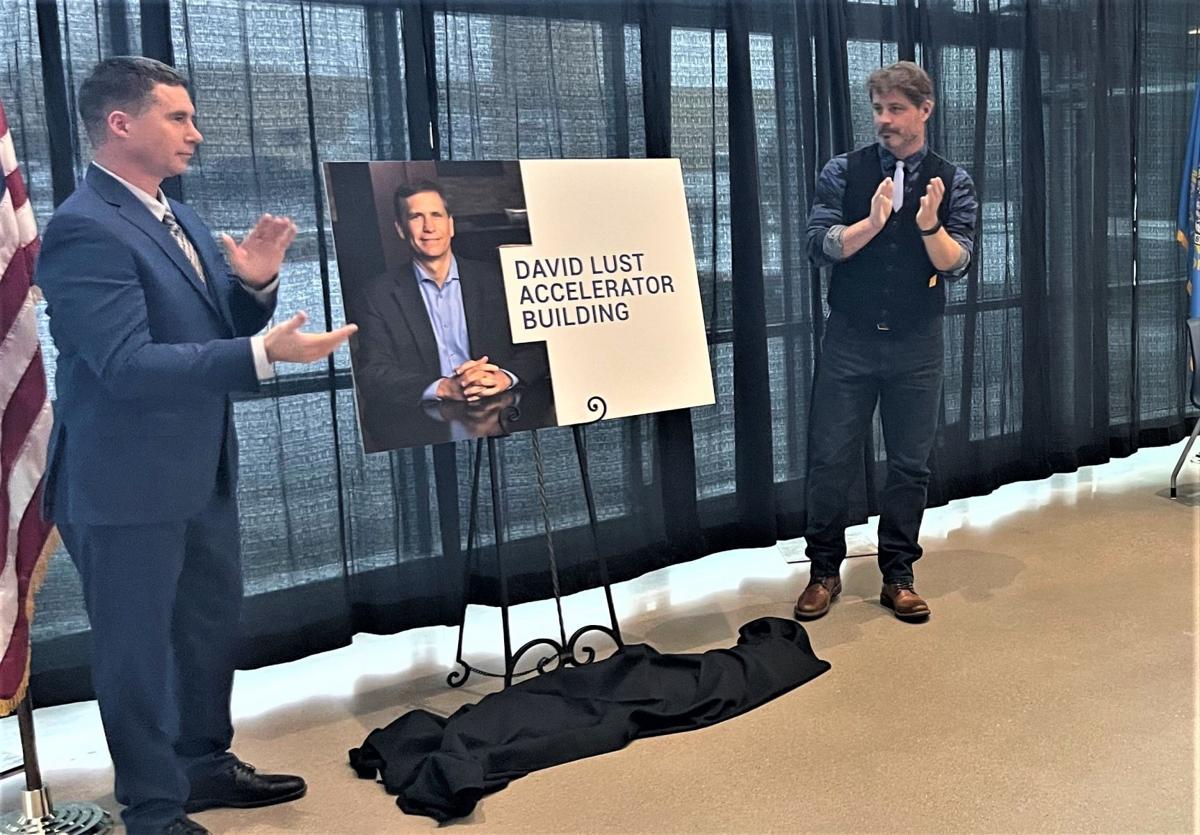 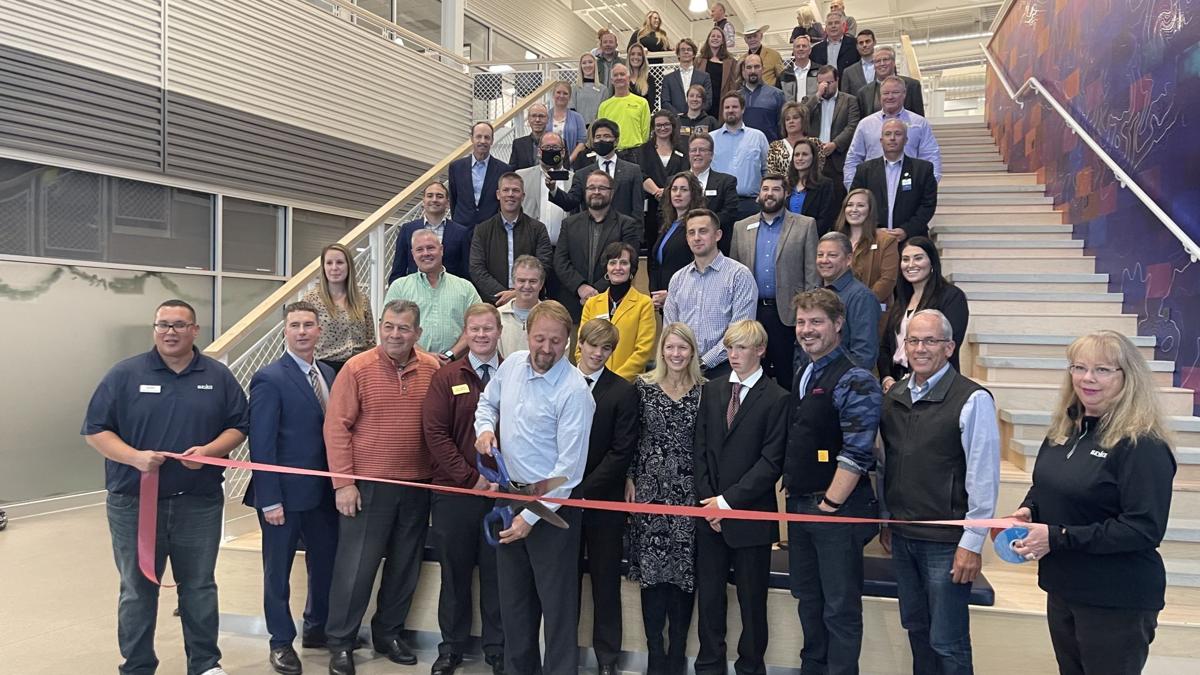 The main building of the Ascent Innovation Campus in downtown Rapid City has been named the David Lust Accelerator Building, in honor of a man who was committed to community service and economic development through Elevate Rapid City.

Lust, 53, died unexpectedly on July 23. The Board of Directors of Elevate Rapid City made the naming announcement Tuesday during the official ribbon-cutting ceremony and open house of the $15 million David Lust Accelerator Building, or D-LAB.

Members of Lust's family attended the emotional ceremony. Elevate Rapid City Board of Directors Chairman Darren Haar said he hopes that when people drive by the 40,000-square-foot building at Main Street and East Boulevard they will think of all the entrepreneurs, all the joint community efforts that came together to build the D-LAB for the future of Rapid City.

"I'm going to ask you to think of one person in particular when you drive by this building — Dave Lust," Haar said. "[He was a] friend and servant messenger. I had the opportunity to work with him on many projects. I saw him as a friend and mentor. Someone you could really rely on. Dave was the kind of guy who was always there for his community. He was there for us individually.

Lust was a business attorney for more than 22 years and in 2006 was elected to the South Dakota Legislature where he served for 11 years, including two terms as majority leader.

He served on the boards of Rapid City Economic Development Partnership, the South Dakota School of Mines & Technology, the Rapid City Area Chamber of Commerce and championed the goals of Elevate Rapid City for economic development.

The Rapid City Council unanimously approved the Ascent Innovation Campus in November 2017 with the groundbreaking of the building now named for Lust in October 2019. Elevate Rapid City was also established in 2019 through the merger of the Chamber of Commerce, Economic Development Partnership, and the Economic Development Foundation to lead development and small business efforts in the Black Hills region.

The David Lust Accelerator Building will primarily serve as an entrepreneurship incubator for new and existing small businesses. The D-LAB will provide management assistance, cost-effective space, and a collaborative approach to develop local businesses.

According to Tom Johnson, President/CEO of Elevate Rapid City, the D-LAB is already 70% leased, with anticipated move-in dates for businesses in February 2022.

"This is a great day for Rapid City. This space will further our mission," Johnson said during the ceremony Tuesday.

And the Ascent Innovation Campus is looking to continue growing following the opening of the David Lust Accelerator Building. The plan for the original Ascent Innovation Building on the campus of South Dakota Mines is for it to be sold back to the school.

Johnson said Elevate is a strong partner with South Dakota Mines and views the campus as critical for the growth of innovation in Rapid City. As the Ascent Innovation Center has relocated closer to downtown, Johnson said it is fitting for the school to take ownership and expand their mission as well.

The D-LAB will be phase one of a larger Ascent Innovation Campus, Johnson said.

"When we are done with this one, we are about to turn around and do another one with another incubator," Johnson said. "We're going to do this again real soon and hopefully have another groundbreaking. We couldn't have done this without those who have come before us like David Lust."

The family of David Lust comforts each other Tuesday after an announcement that the main building of the Ascent Innovation Campus in downtown Rapid City will be named the David Lust Accelerator Building.