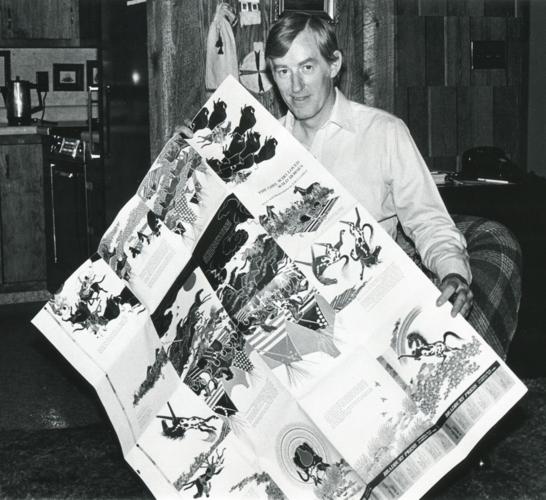 Author and illustrator Paul Goble holds illustrations from "The Girl Who Loved Wild Horses" in August 1981. The book won the prestigious Caldecott Medal. 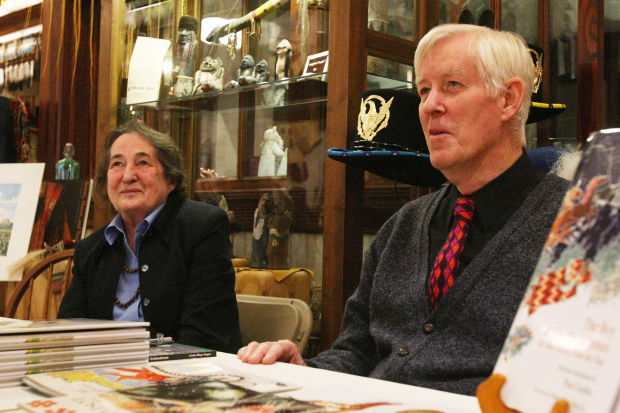 Paul Goble, right, and his wife, Janet, are shown at a book signing in 2010 in Rapid City. Goble spent his life learning and sharing Native American stories in his children's books. 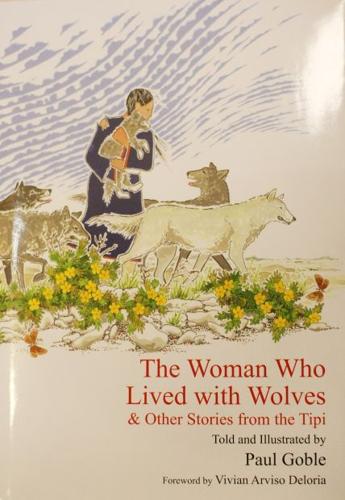 One of Paul Goble's more than 30 books is "The Woman Who Lived with Wolves."

Paul Goble, arguably South Dakota’s most celebrated children’s author and illustrator, died Thursday morning at his home on Ninth Street. He was 83.

Goble, who won the prestigious Caldecott Medal in 1979 for his book “The Girl Who Loved Wild Horses,” was a multi-faceted artist, writer and naturalist who first visited the American West in 1959. Infatuated with the Black Hills' landscape, birds, free-roaming wildlife and Native American lore, Goble moved permanently to the Black Hills in 1977.

Goble was descended from a British family whose love of art spanned generations. His great-great-grandfather, Sir Charles Robinson, was curator of the Royal Collection of Art for Queen Victoria and, from 1853 to 1869, served as a founding member and curator of art collections for the Marlborough House, later renamed the Victoria and Albert Museum in London.

According to Goble's biographer, Gregory Bryan, a professor of children’s literature at the University of Manitoba in Winnipeg, Goble was an industrial designer, author, illustrator and educator who taught art design at London’s Central School as well as the Ravensbourne College of Design & Communication before coming to South Dakota. He also was a sharpshooter in the British Army following World War II.

After nearly four years of intensive research and writing, including several trips to South Dakota, Bryan’s 204-page, large-format book, “Paul Goble, Storyteller,” will be unveiled later this month at book signings scheduled for the South Dakota Art Museum in Brookings on Jan. 19 and Prairie Edge Trading Co. in Rapid City on Jan. 21.

“I’m deeply saddened by Paul’s death,” Bryan said between classes Thursday. “The world of children’s literature is poorer for his loss, and the world in general, because he was such a kind person who dedicated his life to his passions — Native American people and art. His life was a marriage of those two passions.”

Knowing Goble was near death, Bryan said he had the South Dakota Historical Society Press, publishers of the biography, rush the first available copy to Goble in Rapid City. Bryan said he still hadn’t seen a copy of the new book himself, but Goble’s son, Robert, said Thursday that the book’s arrival one week ago was one of his father’s greatest rewards for a lifetime of work.

“The last smile that ever passed Papa’s face was seeing the first copy of his biography,” a tearful Robert said Thursday morning, just hours after his father died. “He considered it the jewel in his crown; the thing that made his career complete.”

The ambitious artist studied Native American culture and art for 18 summers before the release of his first book, “Red Hawk’s Account of Custer’s Last Battle,” published in 1969. On one of his forays to the region, Goble met his future wife, Janet, who was working behind the counter in her father’s store in Custer.

“I sold him a fishing license,” Janet told the Journal in August 1981.

Goble laughed at the memory. “And I used it to fish in seven different states. I didn’t know there was any difference.”

He moved to the Black Hills in 1977 when he was offered the artist-in-residence position at Mount Rushmore National Memorial.

So when he earned the Caldecott Medal two years later, Goble’s fortunes changed.

“Before the Caldecott, my father was painting 500 works a year and struggling,” Robert said. “His time at Mount Rushmore was a period of great effort. What the Caldecott meant to my dad was some sense of financial freedom. It paved the way for all of his future successes. Without the Caldecott, we probably wouldn’t be talking right now.”

Goble's illustrations and writing were at least part of 40 books.

“I think we have lost a kind, gentle and very wonderful person,” Robert said. “Parkinson’s took what he loved to do. As his abilities waned, it has been his kind and gentle spirit which really has been in evidence. Dad aged gracefully and remained a kind gentle and loving person to the end.”

Bill Donovan, who taught school on the Cheyenne River Indian Reservation at Eagle Butte for 33 years and was Goble’s best friend for the last decade, said Wednesday that the pair met because of their mutual admiration of Japanese woodblock prints.

“We would often laugh when we discussed what would happen to our art collections, such as the woodblocks, after we were gone,” Donovan said. “We had the same problem. We finally decided we would build two pyramids on the banks of the Missouri River in which we would be buried with all our treasures about us.”

In fact, Goble donated much of his artwork, valued at hundreds of thousands of dollars, to the South Dakota Art Museum in Brookings. Museum Director Lynn Vershoor said Thursday that her galleries and archives include 500 of Goble’s original illustrations for his books.

“Paul was a gentleman scholar, and I will miss him very much,” Vershoor said. “He was reserved, thoughtful, considerate and respectful. He cared deeply about his work; it truly was his life. He was precise in word, action and in his paintings. His sense of commitment to his work is evident in the amount of research he conducted to accurately depict the colors, designs and symbols he used in his pictures. He had a profound respect for Native Americans, which is evident in his work.”

Retired North Middle School librarian Ruth Ann Karlen said this week she still remembered Paul and Janet’s frequent visits to the school, where they did presentations to students about Native American culture, art and publishing.

“They were such a unique and interesting couple, but middle school kids are funny and don’t often pay attention,” Karlen said. “But when he started talking, they’d move forward in their chairs, hanging on every word he said. It was amazing.”

“I feel joy in my heart knowing Dad is once more walking hand-in-hand with dear Mom, and that they are both young and free of any of the ailments of this world. Moving forward, I know I will have Dad on my right shoulder and Mom on my left.”

And less than two hours after his father’s death, Robert made good on Goble’s final request.

“Categorically, Dad only wanted my longtime companion, Lacinda Kellogg, and me to be married,” he said. “She is a special, compassionate woman whom he loved like a daughter. So this, too, is a day of celebration, because one of Dad’s fondest wishes was that we get married. Today we are officially engaged, one of the last things Papa ever told us to do.”

Janet Goble died in July 2014. Besides Robert and his daughter, Arial, both of Rapid City, Goble is survived by two children from a previous marriage, Richard and Julia, and several grandchildren, all of England.

Events to pay tribute to Goble

In keeping with Goble family tradition, there will be no public funeral, memorial service or burial for award-winning author and illustrator P…

Author and illustrator Paul Goble holds illustrations from "The Girl Who Loved Wild Horses" in August 1981. The book won the prestigious Caldecott Medal.

Paul Goble, right, and his wife, Janet, are shown at a book signing in 2010 in Rapid City. Goble spent his life learning and sharing Native American stories in his children's books.

One of Paul Goble's more than 30 books is "The Woman Who Lived with Wolves."