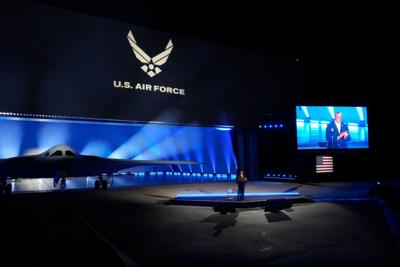 PALMDALE, Calif. — Scored by the percussion of a bomber fleet flyover and chants of “USA!” Friday from a wall of Northrop Grumman employees, after seven years of development and a legacy dating back 80, the B-21 Raider was unveiled at Northrop Grumman’s and the U.S. Department of Defense's Plant 42 in Palmdale, California.

In a closely guarded ceremony, the sixth generation aircraft, deemed the backbone of the future of U.S. air power, was dramatically revealed from behind slowly-rolling hangar doors and rolled out towards an electrified crowd of Air Force personnel, congressional delegations, local leaders and invited guests.

The aircraft’s theatrical debut triumphed a legacy that dates back eight decades — a legacy of bravery, boldness and innovation. The Raider spirit.

“Having that Raider heritage, with being bold, brave and innovative, the B-21 is that,” said Col. Joseph Sheffield, commander of the 28th Bomb Wing at Ellsworth Air Force Base near Rapid City — the future home of the B-21 Raider.

Ellsworth Air Force Base was named as the preferred location for the B-21 in 2019, an unthinkable feat 17 years prior when the threat of closure loomed over the base.

“We had one heck of a hill to climb,” said U.S. Sen. Mike Rounds, R-S.D., at the unveiling Friday. “It was the people in Rapid City that did the heavy lift.”

Rounds recalled the day the announcement was made that Ellsworth was on the BRAC list and recommended for closure — 10,000 people showed up in an arena, he said.

“Our message was we’re not afraid to climb hills,” Rounds said. “In South Dakota, we carve mountains. And that’s what’s happened here. So this is great for America, and it’s really great for the Black Hills of South Dakota.”

“You cannot find a community in this country that respects and supports their installation more than Rapid City and the surrounding areas support Ellsworth,” he said. “And I’ve heard that from high-ranking administration officials and high-ranking uniformed personnel. Rapid City does it right.”

Rapid City Mayor Steve Allender, who was in attendance at Friday’s ceremony, spoke to the culture created in Rapid City by Ellsworth's presence. Born at Ellsworth himself, Allender’s father was stationed at the base, and after retiring, like so many others, decided to return to the Black Hills.

“That happens a lot, and I’ve spoken to dozens of individuals who have sought me out to tell me that they served two or four years at Ellsworth at some point in their career and made a point to come back," he said.

The culture created between Ellsworth airmen and the Black Hills community is one factor of many that contributed to the support system that kept Ellsworth open, and now host the B-21 Raider.

Johnson also credited the installation itself — one he called an “unbelievably well-run base, and has been year in and year out.”

There’s something special about Ellsworth, Allender said — to come from the brink of closure to hosting the next generation in stealth technology, “and it’s going to remain special.”

South Dakota’s role in the story of the B-21 is also the story of the Ellsworth Raiders. The B-21's name — the Raider — comes from the legacy of the Doolittle Raid, forged 80 years ago, and turning the tide of World War II.

The innovation, bravery and boldness of the Doolittle Raiders served as the foundation of an Ellsworth mantra heralding the same principles. Three of the four squadrons that participated in the raid now call Ellsworth home.

The B-21 Raider’s name came when the secretary of the Air Force sought recommendations in 2015, receiving thousands of responses. The chosen name was announced at a ceremony attended by a then-surviving member of the Doolittle Raid, retired Col. Richard E. Cole.

“Think about the Doolittle Raiders and what they were able to do,” said Gen. Charles Q. Brown Jr. at a media roundtable event Friday in Palmdale, prior to the unveiling. “Just a handful of months after the attack on Pearl Harbor, for the very first time you put a bomber on a carrier. That's innovation. That innovative spirit is sitting behind us right now.”

Eighty years later, through the innovation and technology exhibited in the B-21, and the collaboration between Northrop Grumman and the Air Force, the Raider spirit lives on, he said.

The B-21’s impending arrival at Ellsworth has already begun to reshape its hometown of Box Elder. Numerous housing projects have sprouted up as the city prepares for the influx of airmen the B-21 will bring, as well as plans for new schools, a brand-new downtown plaza, new businesses and a newly opened fitness center shared by the base and the community.

“As soon as we realized that we were going to be the training base, and the first base to get the B-21, we knew we had quite a bit of work to do,” said Box Elder Mayor Larry Larson Friday night in Palmdale.

While there is work to do, there is also a sense of pride, Larson said. Larson, who was in attendance at the ceremony, said he talked to friends back home in Box Elder after they had viewed the live stream online.

“They were pretty excited,” he said. “Hey, yeah, we’re from Box Elder — that’s where Ellsworth Air Force Base is located.”

The sense of pride from South Dakotans extends to the nation, as well, and the role the B-21 will play in the nation’s defense.

“The most important part of today is global security,” Johnson said. “This capability which the United States has because of the B-21 is going to keep the world safer. You can’t overstate the importance of this kind of a tool to keep the globe safe.”

The B-21 will serve as a key foundation of the long-running strike capability for the nation, Sheffield said, ensuring strategic defense, challenging of adversaries and ensuring and supporting its allies.

“That’s what the B-21 is going to do in spades as we go into the future. So it’s exciting for Ellsworth to build on our current mission, and where we’re going in the future,” he said.

The unveiling set the table for its arrival at Ellsworth, Sheffield said, where preparations are well underway to host it. A low observable hangar broke ground at Ellsworth earlier this spring, with contract awards for over 30 more projects beginning to formulate.

The unveiling ceremony, precluded by an aeronautics expo championing Northrop Grumman’s history with American aviation, painted a picture of advanced technology unlike anything the Air Force has seen before. An aircraft with unparalleled advances in stealth, long-range strike capabilities, open architecture and digital technology.

Warden described the B-21 as opening a new era of technology, and the most capable stealth bomber ever built.

She recognized the Northrop Grumman team, saying they have “proved once again that we can lead the world in innovation and deliver to our military the technology needed to execute their mission and return home safely.”

Attendees Friday night also heard from Secretary of Defense Lloyd J. Austin III, who rooted the night once again in the legacy of the Doolittle Raiders.

“Now, this Air Force bomber has been in development for seven years, but its roots go back much further than that,” he said. “Eighty years ago, on a cold and rainy April morning, four months after Pearl Harbor, 16 U.S. Army bomber planes took off from an aircraft carrier in the Pacific. And then Lt. Col. Jimmy Doolittle embarked on a daring mission.”

The audacity of the Doolittle Raiders has inspired generations of American aviators, Austin told the crowd Friday night.

“The B-21 Raider is the first strategic bomber in more than three decades, and ingenuity and innovation is proof of the department’s long-term commitment to building advanced capabilities that will fortify America’s ability to deter aggression today and into the future,” Austin said.

He said strengthening and sustaining U.S. deterrence is at the heart of their national defense strategy — and so is the uniquely-American spirit of innovation and invention.

An imposing and impressive presence, the B-21’s mammoth frame was a site to behold as Austin described its superior range, stealth and durability.

“It was definitely an amazing event to be at,” Larson said. “I can’t wait to see it flying over the skies in Box Elder.”

Johnson described the day as a bright light among political infighting and tragedies around the country.

Pentagon debuts its new stealth bomber, the B-21 Raider

B-21 Bomber to be unveiled in December

The South Dakota Ellsworth Development Authority hosted a presentation Thursday on progress and preparations for the incoming B-21 Raider, hea…

Ellsworth Air Force Base was awarded the Dick Schram Memorial Community Relations Award for exhibiting excellence in the planning of an air show. 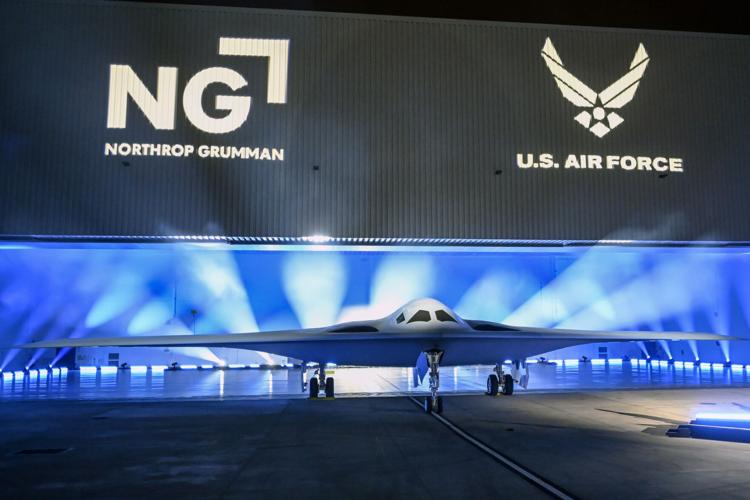 The brand-new, B-21 bomber was pulled out of a hangar during an unveiling ceremony on Dec. 2 at Air Force Plant 42, Site 4, Northrop Grumman in Palmdale, Calif. 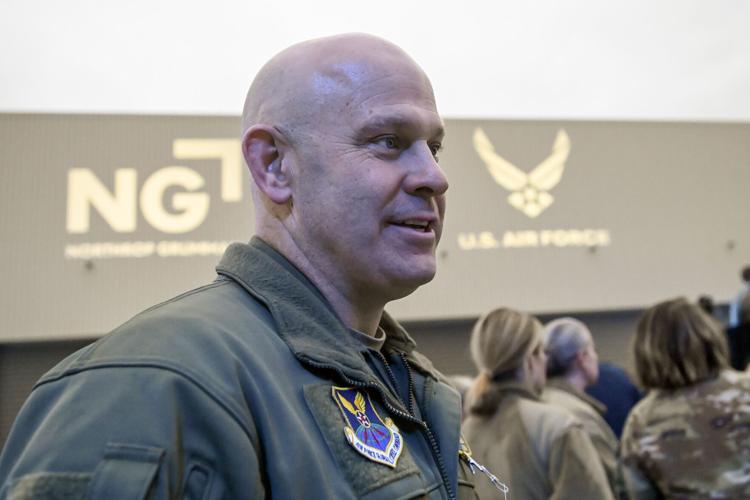 Col. Joseph L. Sheffield, commander of the 28th Bomb Wing, Ellsworth Air Force Base, comments on what the new B-21 bomber will mean to the base ahead of the unveiling ceremony on Friday. 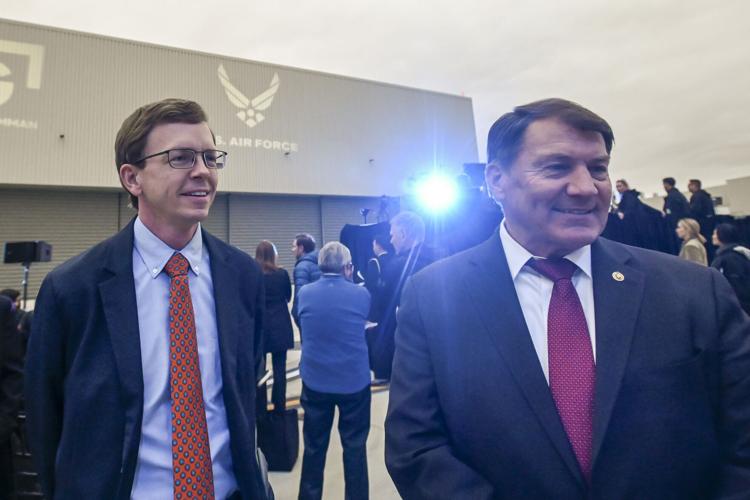 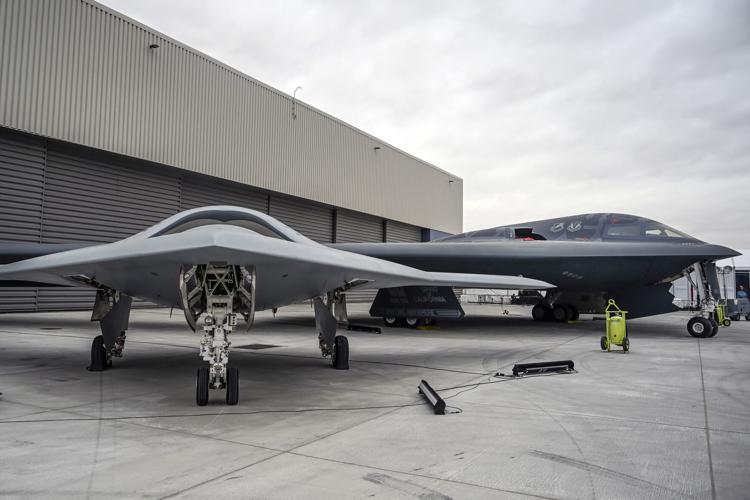 The Northrop Grumman X-47B, left, and Northrop B-2 Spirit, also known as the "Stealth Bomber," were on display during an expo ahead of the B-21 unveiling ceremony on Friday. 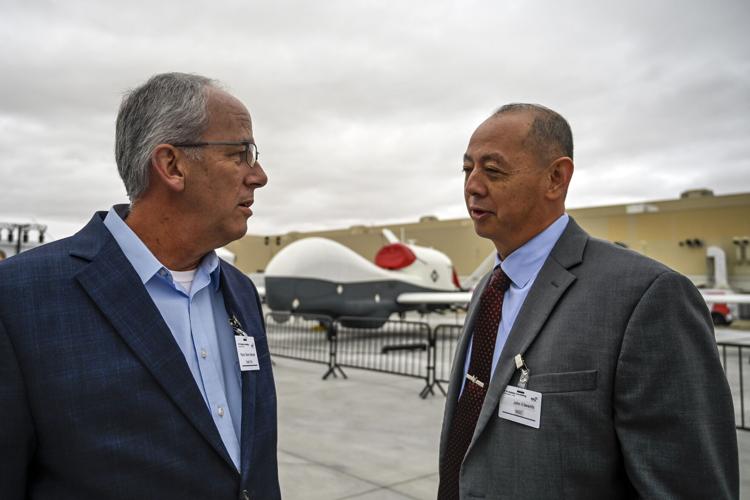 Rapid City Mayor Steve Allender, left, is greeted by Gen. John R. Edwards, a member of the National Security Council and former commander of the 28th Bomb Wing at Ellsworth Air Force Base, while attending an expo ahead of the B-21 unveiling ceremony on Friday at Air Force Plant 42, Site 4, Northrop Grumman in Palmdale, Calif. 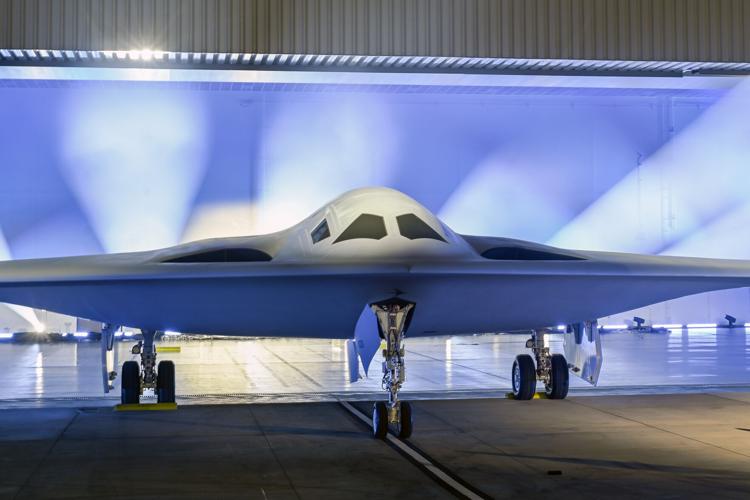 The new B-21 was parked just outside of the hangar during an unveiling ceremony on Friday. 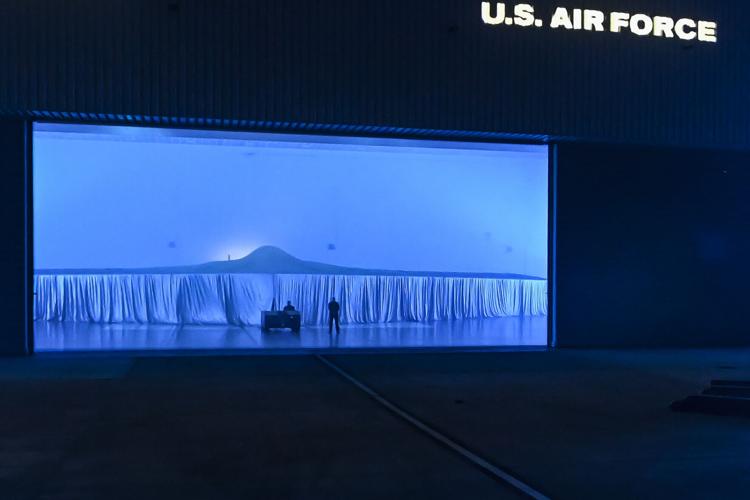 The doors to the hangar open up as the brand-new B-21 bomber is draped in a sheet during an unveiling ceremony on Friday. 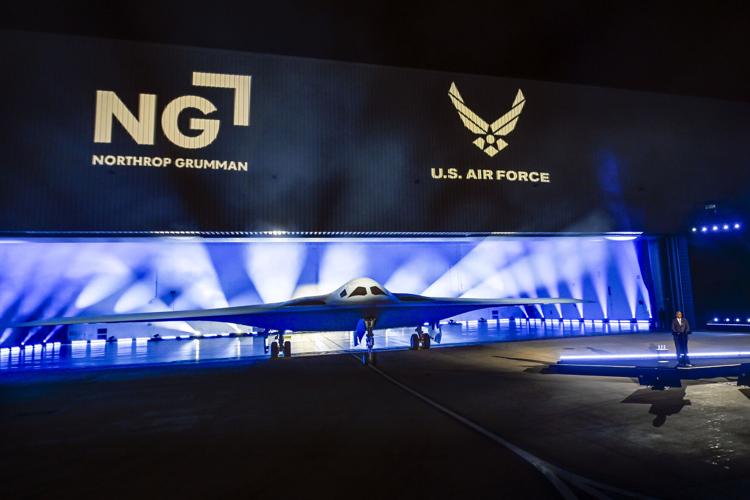