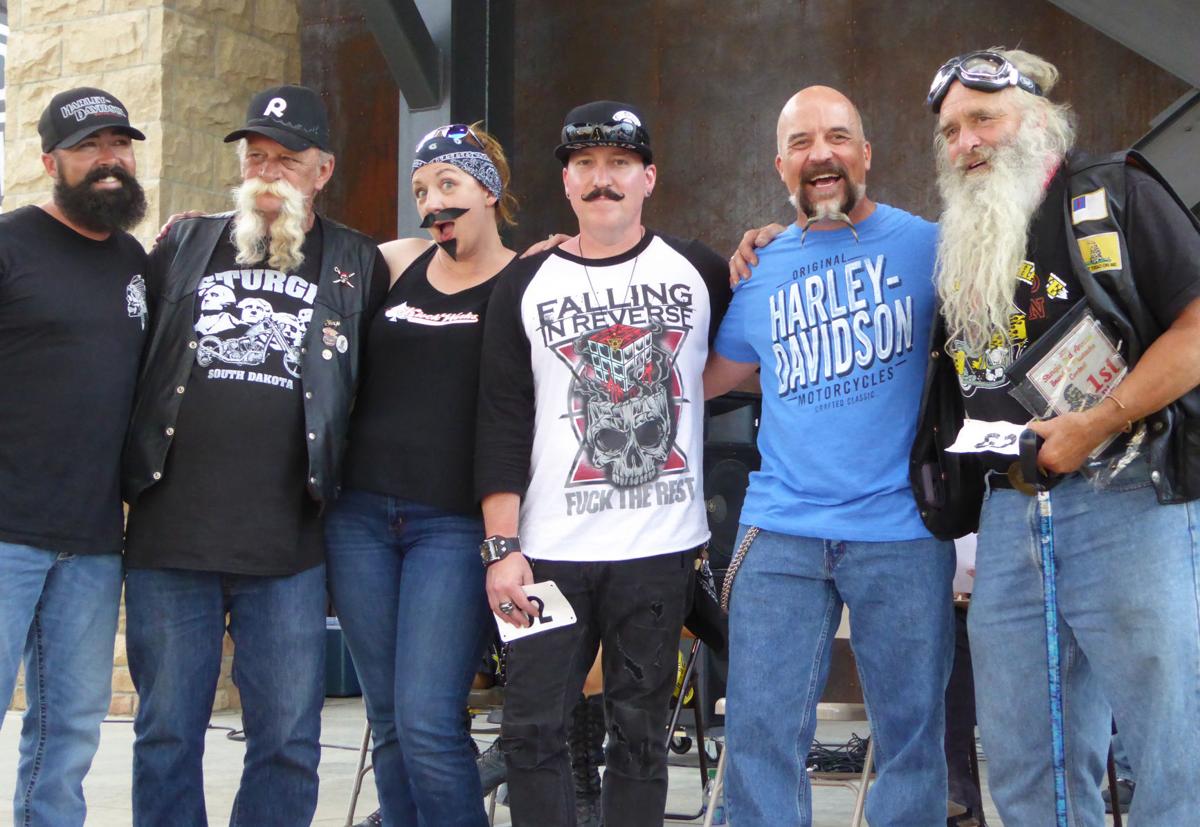 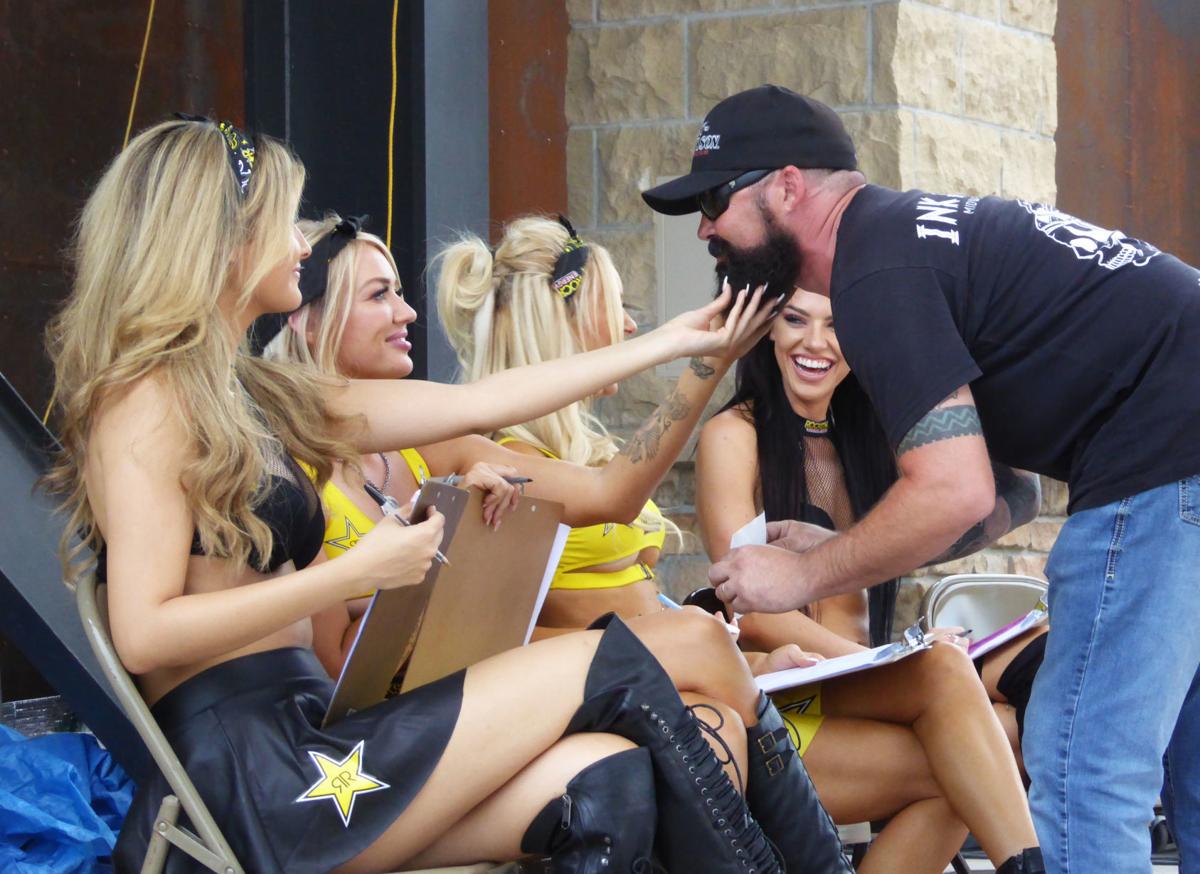 The judges, models with Rockstar Energy Drinks, examine a beard. The man went on to win first place in the Baby Beard category and third place overall. 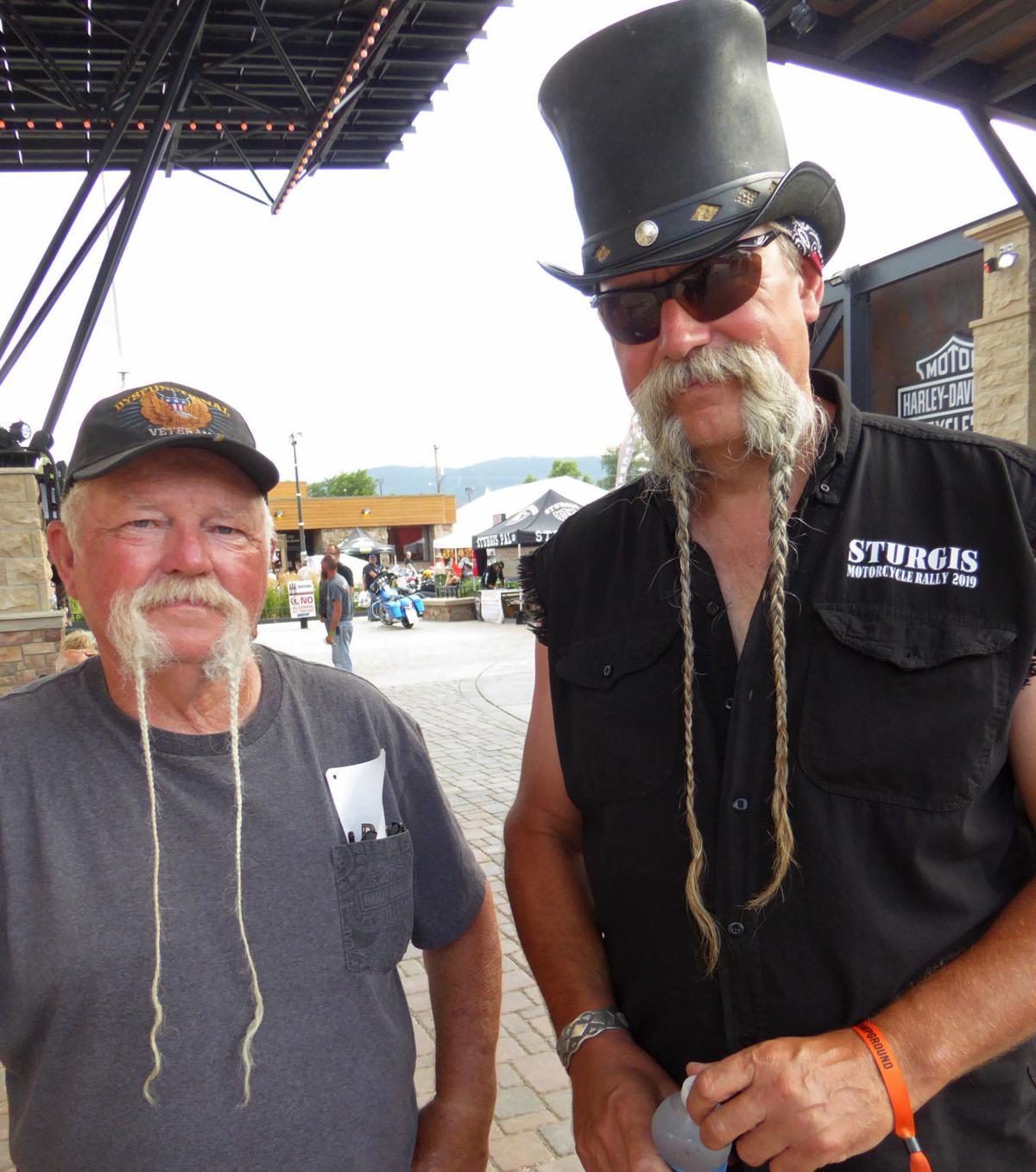 David Rich (left) and Jim Osterloh compare their braided mustaches before the Beard and Mustache Contest. Both have had their mustaches accidentally cut or burned off before. 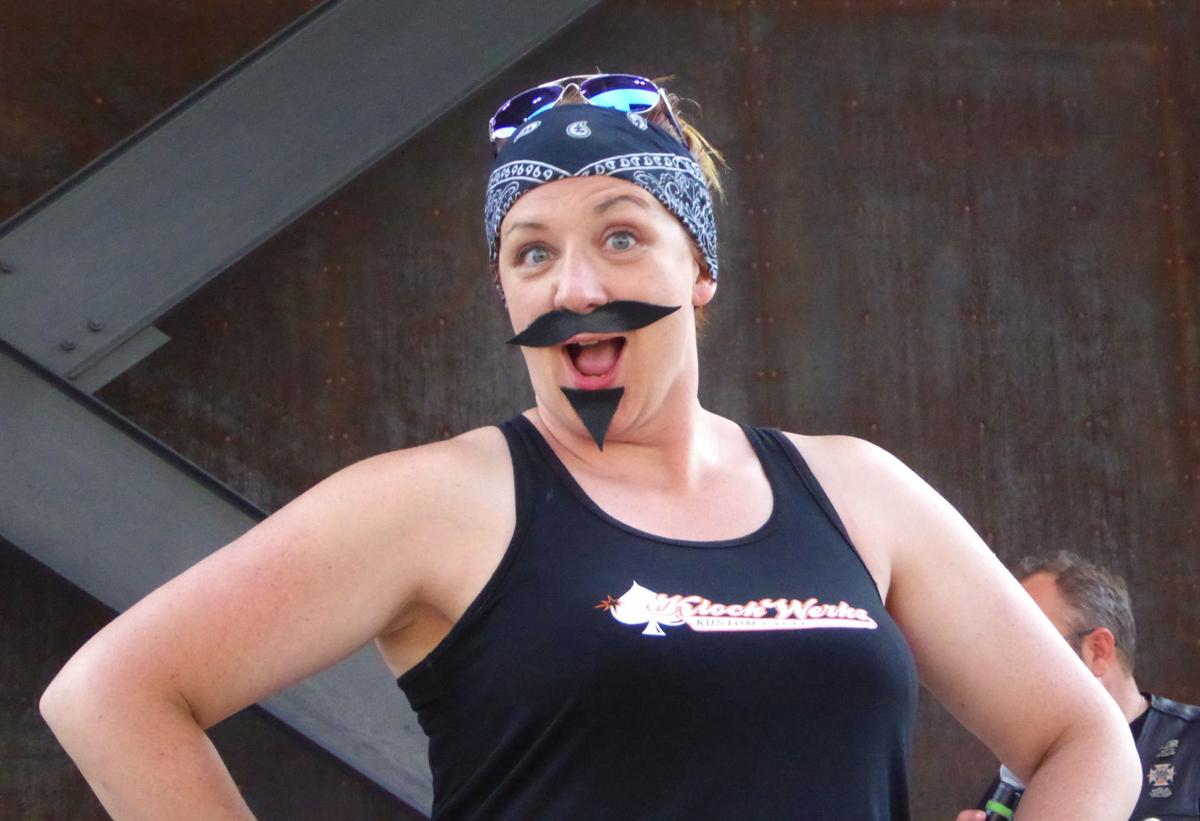 A woman strikes a pose in her leather mustache and goatee.

One by one, more than a dozen bearded and mustachioed men — and two women — lined up Wednesday evening before parading across the Sturgis Rally Point stage, getting their facial hair closely inspected by scantily clad judges and hamming it up for the audience.

After strutting on stage, the contestants answered a few questions from the host before being judged by four models with Rockstar Energy Drink. The women — wearing black, knee-high boots and black-and-yellow mini skirts with bikini tops — used a ruler to measure the length of the contestants' facial hair and ran their manicured fingers through the whiskers before taking notes on their clipboards.

Highlights included a pair of men who modeled their long beards with patriotic sunglasses and cowboy hats, a man who twisted his brown-and-gray beard into two multi-colored swirled spires, and the two female contestants: one who used her long, blond hair to transform into the Sturgis Sasquatch and another who cut leather into a thick mustache and triangle-shaped goatee.

The winner of each category received prizes and went on to compete for the extra goodies that come with winning Best in Show. While the judges narrowed down the three finalists, the audience clapped to signal their favorite contestant: Dave Zien, a former Wisconsin state senator and inductee to the Motorcycle Hall of Fame with a long, gray and wavy beard.

It was David Rich's fourth time at the rally but his first time entering the Beard and Mustache Contest. The 71-year-old, who entered the Bear Soakin' Mustache category, has a 17-inch-long gray, braided mustache that goes down past his chest.

Rich said his mustache has been as long as 20 inches, but "it's been broke off, cut off, burned off" during the 12 or 13 years he's had it. Once he was working underneath a car and a hot piece of equipment landed on his mustache.

"I smelled something burning and I thought, 'what the heck was that' and it burned several inches off," he recalled.

"I rob Pantene from my wife," he said when asked how he maintains his whiskers. Rich said he uses the shampoo and conditioner on his mustache, which he always keeps braided.

"I can't stand it if it's not braided," he said. "It gets in everything. You can't take a bite of food, it's just everywhere. It gets in your mouth, it gets in your eyes, and you cannot ride a Harley with it and survive it because the hair is just going everywhere and beats you in the eye."

"I like to say my mustache grew a mustache," the 64-year-old Boise, Idaho, resident said.

"I thought if I'm going to do a mustache I might as well make it look cool like nobody else has," the 47-year-old Des Moines resident and former Ellsworth airman said when asked how he chose his signature look.

Olson, who ended up winning the Dapper Stache category, said he regularly trims his mustache, has a "tiny mustache comb" to keep it neat and uses a beeswax-based mustache wax to curl up the ends.

Joe Godina, who entered the Baby Beard contest, said he use to have a typical beard until a character from a 1990s-era TV series inspired his current style, which consists of a goatee, soul patch and a short beard that's separated from his long sideburns.

"I saw it on Xena the Warrior Princess. The war god, he has something like this. You got to watch it," Godina said of his inspiration.

Godina, a 64-year-old from Fond du Lac, Wisconsin, who has attended the Sturgis rally nearly every year since 1987, said he uses a straight razor to make the sharp edges and gaps of his facial hair, which fades from black to gray to white.

STURGIS | If the 2019 Sturgis motorcycle rally has seen an increase in attendance over last year, the jump in numbers would likely have come i…

A snapshot of the streets of Sturgis during the 79th annual motorcycle rally.

The judges, models with Rockstar Energy Drinks, examine a beard. The man went on to win first place in the Baby Beard category and third place overall.

David Rich (left) and Jim Osterloh compare their braided mustaches before the Beard and Mustache Contest. Both have had their mustaches accidentally cut or burned off before.

A woman strikes a pose in her leather mustache and goatee.