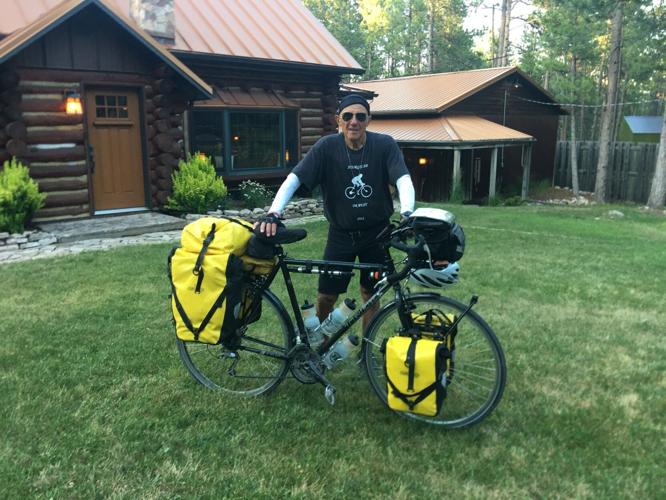 George Salabes, 77, stands in front of his friends' cabin at the end of a 1,400-mile bike tour. Salabes rode his bike from Des Plaines, Illinois to Sturgis, arriving July 29. 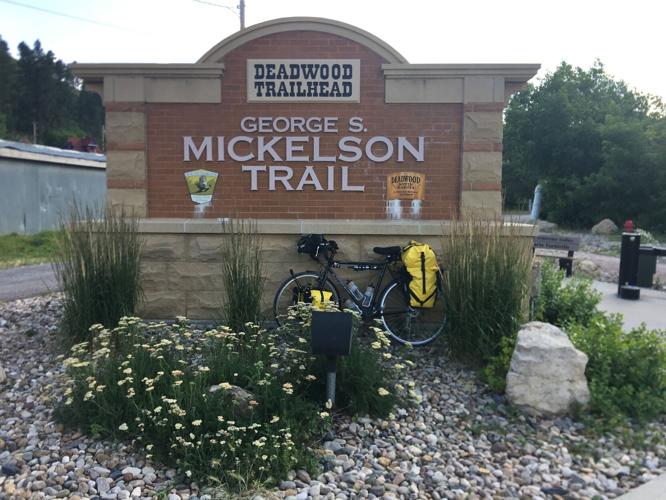 The Mickelson Trail trailhead in Deadwood 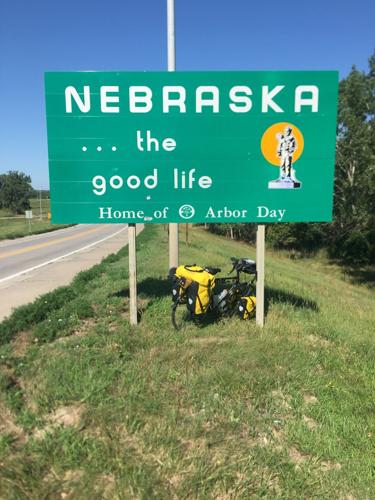 Salabes' bike is leaned against the Nebraska entrance sign during his bike tour from Des Plaines, Illinois to Sturgis July 10. 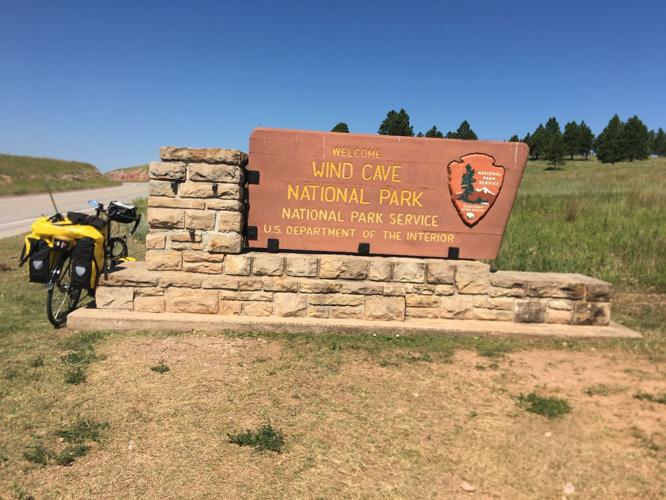 Salabes' bike next to the entrance to Wind Cave National Park.

As motorcycles pour into Sturgis for the 82nd annual Sturgis Motorcycle Rally, one bike in particular might stand out: a 520 Trek touring bicycle, ridden by 77-year-old George Salabes from Des Plaines, Illinois to Sturgis.

Why? Because he can.

The ride consisted of nearly 40 days and mental fortitude that admittedly waned at times, Salabes confessed. Yet on July 29, he rolled his Trek 520 down the driveway of his good friend Don Kates’ cabin, between Sturgis and Deadwood, met with a cold beer and frozen pizza.

Not his first rodeo, Salabes has made four major touring treks since 2010 — including a ride from the Atlantic to the Pacific Ocean, with the longest stretch being 2,359 miles from Yorktown, Virginia to Pueblo, Colorado.

Sturgis, his first ride in six years, was different. It carried the weight of fleeting time and friends passed on. Graduations and weddings have turned to funerals, Salabes said.

“I feel like it'd be squandering something that I've been given if I didn't do it,” he said.

He found himself in possession of precious time, but also an itch. One more ride — a craving for adventure, and a challenge. Because he can.

Kates and his wife, Deborah, first lured Salabes out to Sturgis in 2013 when they bought a cabin and invited him out for the rally. Both professional photographers, Kates and his wife had credentials that opened VIP doors at the rally — and kept Salabes coming back in 2017, 2018, 2019 and 2021.

Notably, the gap years were mostly due to his other bike tours, with the exception of one year due to COVID-19. For 2022, he decided to take the tour to Sturgis.

The pull of Sturgis wasn’t the VIP credentials, the beauty of the Black Hills or even the rally, though, Salabes said — it was an excuse to see his friends, and the journey.

The Sturgis ride began on June 22, but Salabes’ history with bicycle touring began in 1976. The country’s 200th birthday had sparked bicentennial celebrations across the nation. A Sports Illustrated article drew his attention to an event called “Bikecentennial ’76,” an event consisting of a series of bicycle tours on the TransAmerica Bicycle Trail during summer 1976.

While Salabes wasn’t able to participate in the Bikecentennial, the seed was planted. It wouldn’t sprout, however, for another 34 years. He still rode bikes in the interim, but touring took a backseat to law school, opening his own practice and teaching real estate part-time.

He eventually transitioned to full-time teaching at a community college in a suburb of Chicago — where he met his friend Kates, who was teaching psychology. Full-time teaching meant free summers and an opportunity to revisit the touring bug he’d never quite shaken.

A subculture all its own, bicycle touring could be described as bike riding meets backpacking, involving self-contained travel lasting from days to months. All of Salabes’ rides have been without a support vehicle.

His first tour was in 2010, followed by rides in 2014, 2015 and 2016. He rode from Des Plaines to Boulder, Colorado; Yorktown, Virginia to Pueblo, Colorado; Pueblo to Florence, Oregon; and Des Plaines to Amarillo, Texas. Now, six years after his last ride, it was time for Sturgis.

He created his own route in Google Maps, using a combination of GPS and paper maps to navigate through Illinois, Iowa, Nebraska and South Dakota. He planned to stop at motels along the route whenever possible, and ate at local restaurants. He packed camping gear and light snacks, just in case.

By car, the route is about 1,000 miles. The extended bicycle route included the Mickelson Trail, which he picked up in Pringle and rode through Custer, Hill City and Sturgis. The Mickelson Trail, Salabes explained, is a “rails to trails” trail, typically constructed after a railway had been abandoned with grades not exceeding 3%.

His only companions were audiobooks, music and his thoughts. He mostly listened to his own curated playlists, scattered with Bruce Springsteen, Bob Seger, Rod Stewart and John Mellencamp. He also likes soundtracks. “Dances with Wolves” made the cut, an appropriate listen through what he called “Dances with Wolves” country.

His trusty touring bike, unofficially dubbed “Waldo,” has been with him since 2007. A touring bike, as described by Salabes, has dropped handlebars and similar geometry to a road bike. The tires are not as narrow as road bikes, but narrower than mountain bikes.

The bike was loaded up with panniers, tools, and miscellaneous equipment such as a compass, knife and first aid kit. He brought three spare tires that he thankfully didn’t have to use. A cyclist superstition: never ask if they’ve had a flat tire.

He kept a journal throughout the ride, “me talking to me,” he said in one of his entries. He faithfully logged random thoughts, events, observations and emotions every day of his journey.

“Writing about it a day later is not the same,” he said. “Once a day has passed, the emotions and flavor of that day are gone and are almost impossible to resurrect.”

The past day blends into the cumulative yesterday, he wrote.

The journal chronicled food and motel reviews, landscape and topography descriptions, and battles against the elements, exhaustion and cattle guards. He wrote of the songs of train whistles, comparing them to the rhythmic taps of door knocking. Parts of the journal read like a reflection, drawing on quotes from literature or old friends, or contemplations on bygone biking days.

The journal also captured his accumulated knowledge across the miles — the history of trails or cities and education from locals. He could tell you who to ask for when making motel reservations, and which ones have the best breakfasts (or none at all).

Reports across news stations paint a picture of “how terrible everything is in this country and all the problems we have,” he said, but one thing touring has taught him: there are phenomenal people in the world.

He said bikers are some of the nicest people he’s ever met. While the Sturgis tour didn’t offer as many characters as past tours, he said he was consistently met with the kindness of strangers.

An epilogue Salabes wrote for his final journal entry logged 1,148.4 miles by bicycle and 224.7 by car, over 30 riding days and eight non-riding days. He said the journey was time-consuming and draining, but “worth every effort.”

He won't remember the hurting knees or the exhaustion. He does remember the adrenaline that pushed him up the final stretch of uphill gravel, “because it was over,” he said, and he knew a cold beer and his good friend were waiting.

He concluded the journal with the following words:

“The 'Because I Still Can' Ride is finished. I have proven to myself that I still can. Take me out Coach. I'm done.”

SNAPSHOTS: Who was at the 82nd Sturgis Motorcycle Rally?

Of the thousands who crossed into Sturgis during the 82nd motorcycle rally, here are 24 people that stood out to us.

Alcohol blamed in accident that landed a vehicle in a tree

Rapid City police were called to the 3600 block of west Chicago Street Wednesday evening for the report of a crash that had just occurred, wit…

STURGIS — With the 82nd Sturgis Motorcycle Rally all but in the books, Sturgis Police Chief Geody VanDewater and Meade County Sheriff Ron Merw…

This adorable red panda at a U.K. zoo is a 'miracle'

This adorable red panda at a U.K. zoo is a 'miracle'

George Salabes, 77, stands in front of his friends' cabin at the end of a 1,400-mile bike tour. Salabes rode his bike from Des Plaines, Illinois to Sturgis, arriving July 29.

The Mickelson Trail trailhead in Deadwood

Salabes' bike is leaned against the Nebraska entrance sign during his bike tour from Des Plaines, Illinois to Sturgis July 10.

Salabes' bike next to the entrance to Wind Cave National Park.