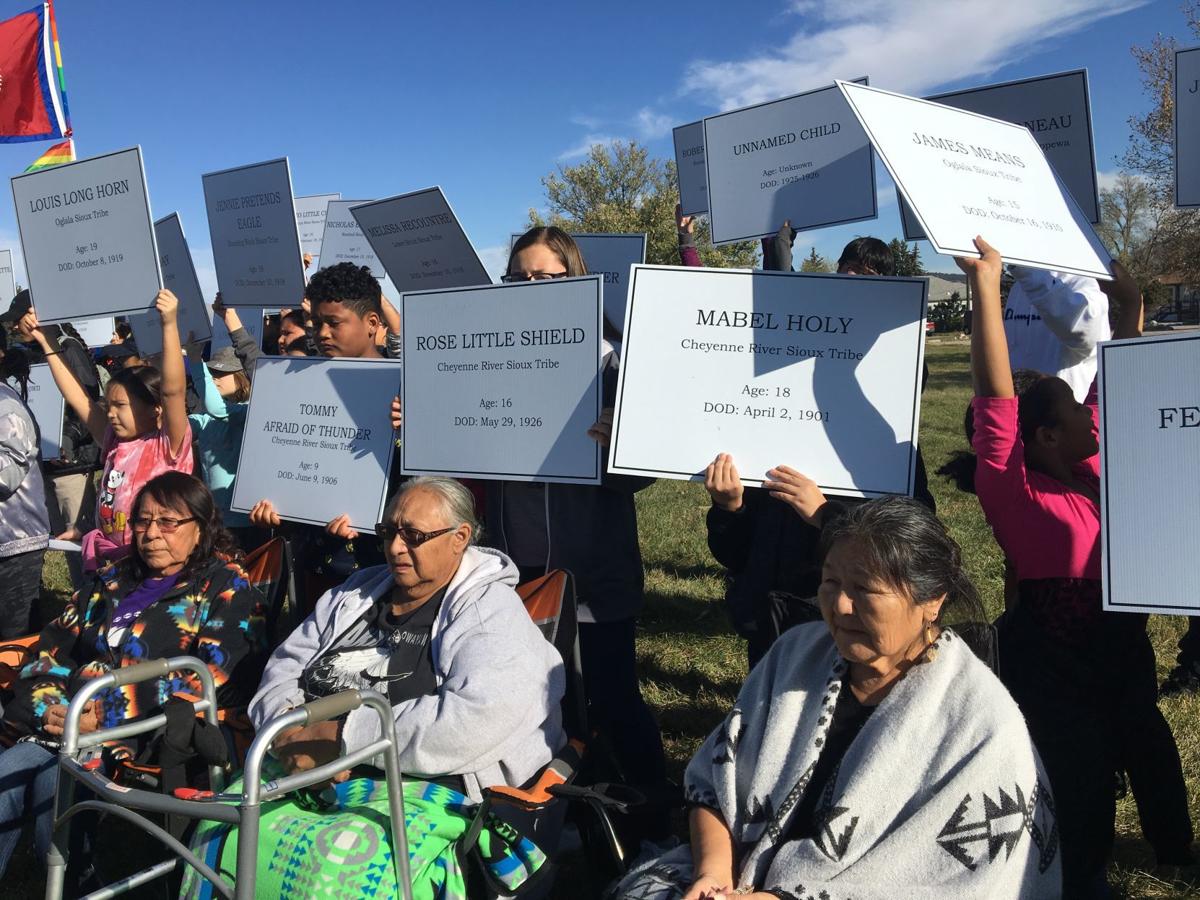 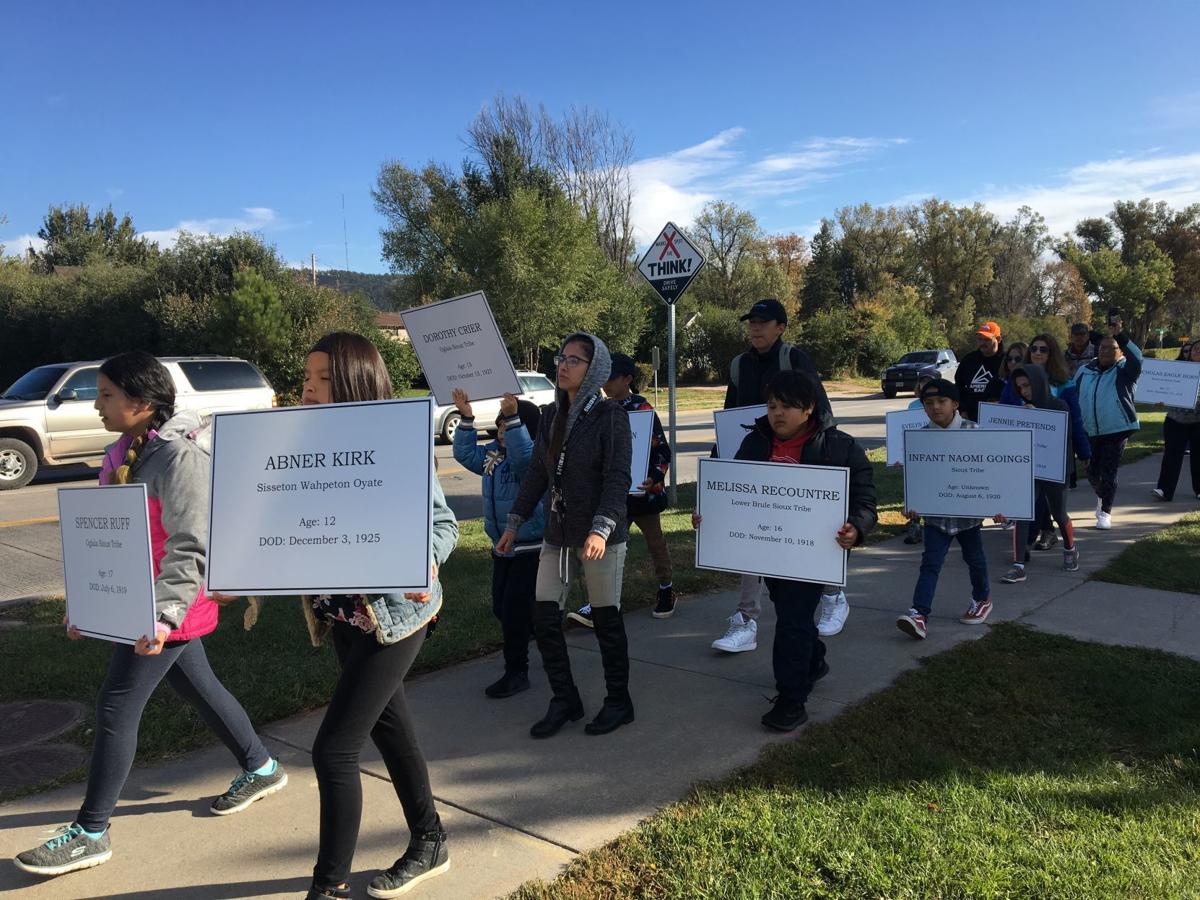 Youths holding the names of young people who died at the Rapid City Indian Boarding School lead a memorial walk from Sioux Park to Sioux San. 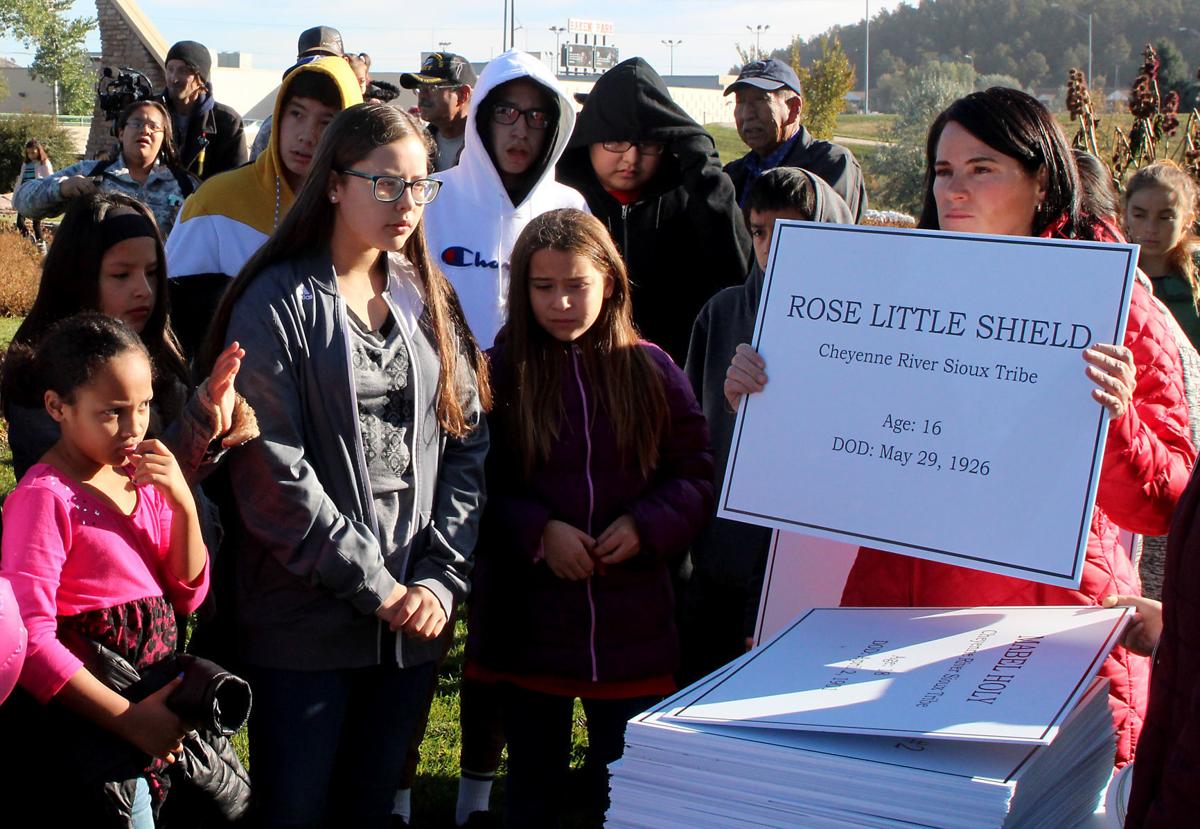 Placards featuring the names of children who died at Rapid City Indian Boarding School are handed to young people at Monday's event.

Dozens of Native American and allied youths led a march and held signs Monday with the names of indigenous children who died while attending the Rapid City Indian Boarding School in the late 1800s and early 1900s.

Honoring Native youths from the past and present, and remembering history while looking toward the future, was a key theme at the second annual boarding school memorial walk held on Native American Day.

"Today is a day of healing and remembering, but also we have to move forward, move on to another world where we try, most importantly, to prepare a better way of life for our young children," said Lakota spiritual leader Richard Moves Camp.

The boarding school complex was operated by the Bureau of Indian Affairs from 1898-1933 on a 1,200-acre property that now consists of Sioux San Hospital and surrounding areas in West Rapid, said Heather Dawn Thompson, an attorney who researched the topic. The federal government took hundreds of Native American children from their families on the Pine Ridge, Rosebud and Cheyenne River reservations, but also from other areas of the Dakotas, Wyoming, Montana and Wisconsin. Once there, they were forced to assimilate to white culture and not allowed to practice their own.

Thompson and other volunteers with the boarding school memorial committee have identified 49 children (including eight whose names are unknown) who died at the school when they were infants to the age of 19 from causes ranging from disease to malnutrition.

"We know that this is a significant underestimate of the number of children who passed away," Thompson said. She said the school kept poor records of the students, and that they just crossed off their names when they died, while doctors would simply write that a boy or girl had died. About 10 years of records were lost due to a fire, and there are no records about children who died while going to and returning from school.

Laura Armstrong, president of the Rapid City Council, spoke of children and the families who have suffered and still suffer from the boarding school's existence.

Robin Gillespie, director of federal programs at Rapid City Area Schools, said the federal government and school stripped the children of their homes, belongings, identity, and for some, their lives.

"We must come together to acknowledged the devastation to our Native community, to take responsibility, to join hands and realize that racism in Rapid City still exists," she said.

Phil Little Thunder from Parmelee connected the Rapid City boarding school to his time at the Catholic boarding school in St. Francis, while Monique "Muffie" Mousseaux, a Lakota Two Spirit activist, said that adults shouldn't be afraid to teach young children to stand up to racism.

Thompson read the names of students who died off of large white signs, which she handed out to children. Some signs only said "male child" or "female child," while others had details such as the child's tribe, age and date of death.

The youth led the group on a one-mile walk, encouraged by drummers singing in the back of a slow moving pickup, until they reached Sioux San, where they stood behind elders whose relatives died at the school.

"Our grandfather and his sisters survived Wounded Knee only to be taken away to boarding schools — and some of them not to be seen ever again. This is sad. It hurts," said Violet Catches, an elder from Cherry Creek whose mother's aunt, Mabel Holy, died at the school.

Freeda Holy Bull Condon, Catches' cousin, told a story of four boys who escaped from the boarding school to Red Shirt and then ice skated along the Cheyenne River home to Bridger at night, sleeping during the day to avoid officials searching for them on horseback.

Others died while trying to escape, like 17-year-old Mark Sherman and 15-year-old James Means, who were hit by a train, Thompson said.

Valtina Little Shield, another elder from Cherry Creek, said her father's sisters attended the boarding school, and while Edith survived, Rose died and was returned to her family who buried her on the Cheyenne River Reservation.

Jennilee Bissonnette-Rooks, who lives in Wanblee, told the Journal that her family is still searching for their grandfather Adolph Bissonnette, who died at the school when he was 12 in 1918.

"Hopefully, one day we can find him and take him home," she said.

While researching the children who died, the committee also learned about what became of the old boarding school land, Thompson told the Journal.

For decades, Native elders have been ignored when they raised concerns about three or four parcels of land owned but not used by the city and school that are violating a Congressional decision that says land not being used must be returned to the federal government, Thompson said.

"Now the city and the school district are finally really open to the conversation so we're going into the community to ask them, if we are going to have a land swap, what would be your three top priorities for the use of your land," she said of an upcoming series of listening sessions.

Ideas proposed by elders include using the land for a Native American community center, cultural center or museum, powwow grounds and housing. People can learn more and suggest ideas during the first meeting Thursday at 6 p.m. at I Am Legacy in the mall.

The committee is also raising funds for a proper cemetery for some of the children who were buried in an unmarked area near Sioux San.

The location of the 25-acre site is currently not publicized in order to protect it, committee member Lindsay Huffman told the Journal.

She said the group hopes to raise at least $50,000 for headstones, a walkway and fencing. The group also hopes the city will label the land as a cemetery so it can help with maintenance and security.

Donations can be made online or in person at the Black Hills Area Community foundation at 803 St. Joseph St. in Rapid City.

Group lays out history of displaced Natives in Rapid City

Youths holding the names of young people who died at the Rapid City Indian Boarding School lead a memorial walk from Sioux Park to Sioux San.

Placards featuring the names of children who died at Rapid City Indian Boarding School are handed to young people at Monday's event.