Bronze statues of President Donald Trump and future U.S. presidents will likely be installed along Kansas City Street and a portion of Main Street.

The foundation in charge of the City of Presidents project has identified four intersections along those streets as potential sites for 16 statues. Planned locations for the statues were included in the new version of the foundation's agreement with Rapid City. 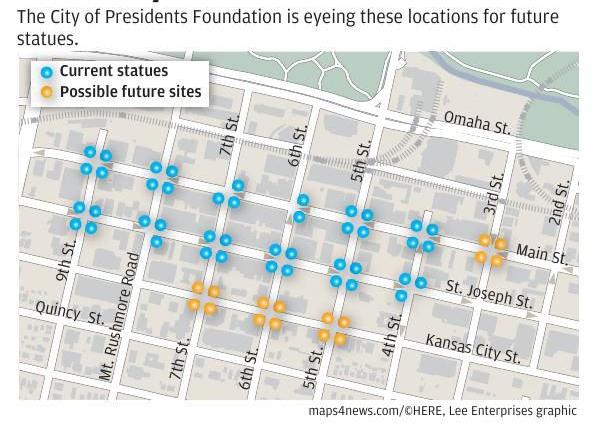 The city council is expected to reauthorize the updated agreement at its meeting Monday. It was approved unanimously by the council's Legal and Finance committee on Wednesday.

Consideration of the new agreement comes after the recent unveiling of Barack Obama's statue, which is the latest to be added to the collection. Sculpted by Rapid City artist James Van Nuys, the statue has since been installed on the corner of Fourth and St. Joseph streets.

The life-size statues that make up the project have traditionally been placed along Main and St. Joseph streets since 2000.

"We’d like to have the opportunity to stay within those parameters or a street up or down," project co-founder Dallerie Davis said Wednesday.

With much of the downtown portions of those streets now occupied, organizers are looking at the Fifth, Sixth and Seventh street intersections with Kansas City Street. The intersection of Third and Main streets also is being considered.

No decisions have been made about where the statue of President Trump will be located and when it will be installed, Davis said. A sponsor has been found for Trump's statue, she said, although she declined to name that person.

"We’ve come up with some real interesting potential designs," she said of President Trump's statue, which will be installed after his time in office ends.

Maher also contributed to the Trail of Governors in Pierre, which consists of life-size statues of South Dakota past chief executives. He has sculpted works displayed at the South Dakota Sacred Heart Monastery and Hospital in Yankton, Saints Peter and Paul Catholic Church in Pierre, the D.C. Booth National Historic Fish Hatchery in Spearfish and on the Saint Louis University campus.

Mayor Steve Allender has named six residents to a task force that will study the future of the Rapid City Human Relations Commission, includin…

QUIZ: How well do you know the presidential statues?

The City of Presidents statues in downtown Rapid City are more than a photo opportunity. See how well you know the statues with our quiz.

Quiz: Do you know which presidents had beards?

As citizens of the City of Presidents, we are all experts on our national leaders -- and their facial hair. In honor of Presidents’ Day in Feb…