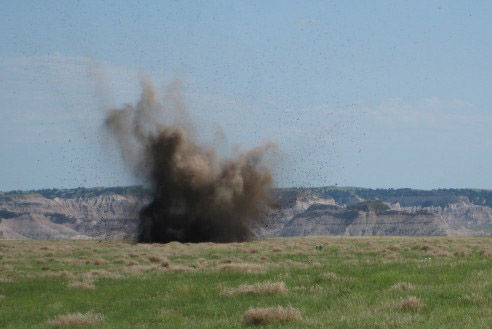 An artillery shell is detonated in 2011 in the former Badlands Bombing Range. The Army Corps of Engineers will meet Wednesday about cleanup at the former bombing range. 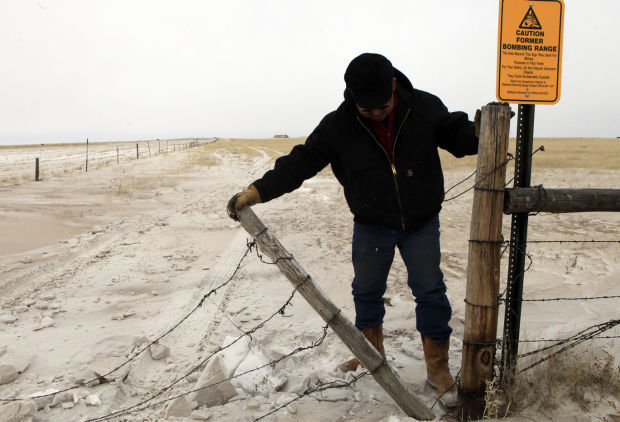 Standing next to a sign marking the boundary of a former bombing range, Melvin Swallow closes a fence to land he leases for grazing on Cuny Table in this 2013 file photo. The Army Corps of Engineers is meeting Wednesday on the cleanup of the bombing range.

KYLE | Seventy-two years after it began using the Pine Ridge Indian Reservation for target practice, the federal government is nearly finished cleaning up a dangerous section of the mess left behind.

The U.S. Army Corps of Engineers will host a public meeting at 6:30 p.m. Wednesday at the Lakota Prairie Ranch Resort near Kyle to present a proposed next step and hear public comments on the cleanup of three former target areas within the old Pine Ridge Gunnery Range.

The proposal is to continue with what the Corps calls “land use controls,” such as deed notices, zoning ordinances, special-use permits, restrictions on excavation, fencing and warning signs. Any unexploded ordnance or debris that might be deeper than 4 feet in the ground will not be removed.

Thousands of pounds of material shallower than 4 feet has already been removed as part of a project that’s been ongoing since studies were conducted in the 1990s.

“It’s kind of nice to see it coming to an end here,” said Kirk Engelbart, project manager for the Corps. “But there will always be institutional controls out there, and people need to be careful.”

The gunnery range was created in 1942 when the federal government seized an area of the reservation measuring about 40 miles across and 15 miles deep. The seizure displaced 125 families.

During World War II, warplanes on practice runs pummeled the range with shells and bombs. Over the next few decades, the range was used by the Air Force and the National Guard. Most of the land has since been returned to the Oglala Sioux Tribe.

Efforts to remove unexploded material and debris have been focused, Engelbart said, on areas where there is a “significant consolidation of munitions.”

One of those areas includes a trio of old targets: the XU Hill Demolition Bomb Target, the Battle Ship Bomb Target and the Suspected Target, all within Jackson and Shannon counties on the Pine Ridge Reservation. The three targets consist of a combined 1,860 acres, or three square miles — a small portion of the 341,726-acre, 534-square-mile range.

The Corps’ removal efforts at the three target sites since 2006 collected about 17 tons of what the Corps calls “munitions debris”: projectiles, shell casings and other material that is free of explosive hazards.

Additionally, the Corps recovered 517 “munitions and explosives of concern,” which is a term applied to materials that could pose an explosive hazard, including bombs, bomb pieces and cartridges.

At each of the target sites, according to the Corps’ proposed plan, “the potential remains” for munitions and explosives of concern deeper than 4 feet below ground surface.

Engelbart said 4 feet was selected years ago as a dividing line between material that was likely to stay buried and material that could be pushed to the surface by the annual cycle of freezing and thawing.

Anyone who wishes to comment on the proposed plan for the three target sites but cannot make it to Wednesday’s meeting may submit written comments through Dec. 5 to Kevin R. Quinn, U.S. Army Corps of Engineers, Omaha District, 1616 Capitol Ave., Omaha, Neb., 68102-4901.

An artillery shell is detonated in 2011 in the former Badlands Bombing Range. The Army Corps of Engineers will meet Wednesday about cleanup at the former bombing range.

Standing next to a sign marking the boundary of a former bombing range, Melvin Swallow closes a fence to land he leases for grazing on Cuny Table in this 2013 file photo. The Army Corps of Engineers is meeting Wednesday on the cleanup of the bombing range.