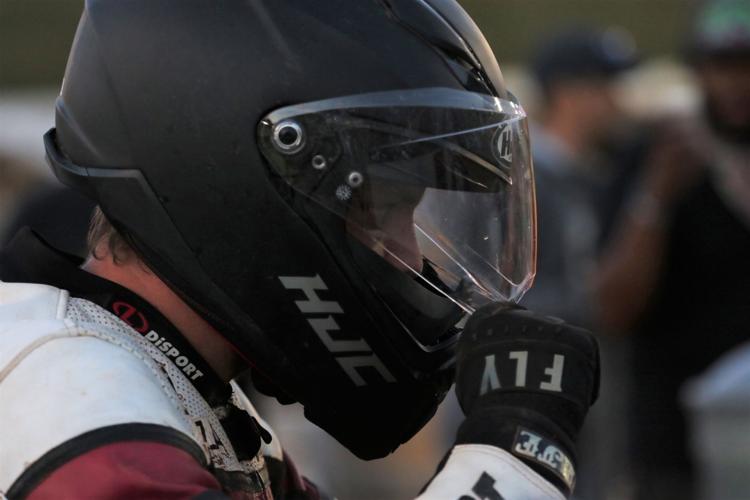 Erik Hartley, flat track racer and founder of Evil Hours Racing, adjusts his helmet before practice on the J.C. Pappy Hoel Short Track Friday at the Jackpine Gypsies Motorcycle Club. Hartley served in the Air Force between 2006 and 2012, and was later diagnosed with PTSD. 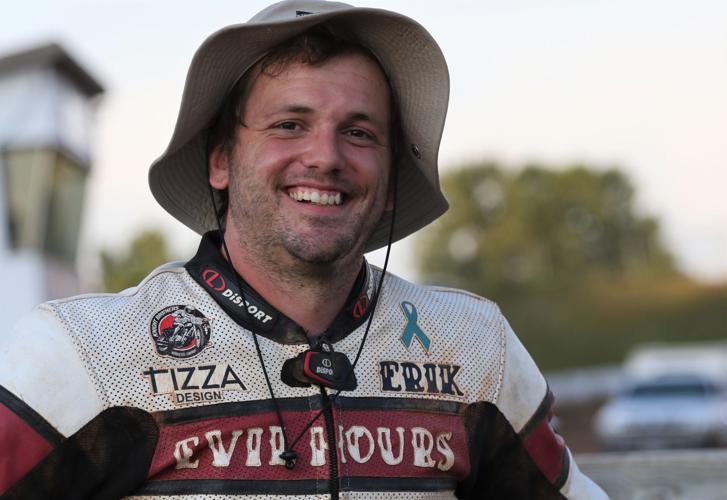 Erik Hartley didn’t feel at home after serving in Afghanistan until about six years after returning to United States soil and moving to at least seven states and three different countries.

When he returned from serving as a crew chief on C-130s in 2012, Hartley didn’t know he had post-traumatic stress disorder and didn’t talk about it to anyone until after he saw flat track racing in 2018 when he went to the Springfield Mile in Illinois.

“Whatever made me go to the race, whatever entity did it, I’m glad I did,” he said. “I saw those bikes and the week after I got a bike and started building it… When I was watching that race and saw the families and the community and how welcoming everybody was, I still get chills when I think about it.”

Watching that race led to the launch of Hartley’s nonprofit organization Evil Hours Racing in 2019. It focuses on racing as well as advocating and finding resources for veterans with PTSD.

Hartley traveled from South Carolina to the 80th annual Sturgis Motorcycle Rally to compete in short track races Friday, Saturday and Monday, but also to provide a veteran with a story similar to his own with an expenses-paid flat track class through XTreem Flat Track Wednesday.

He said that’s pretty typical when he asks veterans if they want to take a flat track class.

Those classes are typically paid for through donations.

Hartley said he speaks with veterans through Evil Hours Racing a couple times a week, if not every other day.

“Communication with other veterans in a similar situation is very regular and that’s what keeps me going,” he said. “Sometimes I can be really hard on myself because you have to run a nonprofit like a business, and it’s really hard to start a business — you doubt yourself a lot. When I see veterans and I talk to veterans or I see someone wearing shirts at a race or doing this, it all just reaffirms the work I’m doing as well as the board of directors and everybody who believes in this nonprofit.”

Now Hartley races under the moniker “The Nomad,” which is a nod to his frequently moving across the globe. The name Evil Hours Racing is also a nod to Hartley’s time in Afghanistan and his fellow servicemen.

He said they called the time between mortars and rockets landing the evil hours.

Hartley said he makes sure veterans know there’s a way past and through their PTSD, it doesn’t just have to be in a therapist’s office. There’s Movement Desensitization and Reprocessing (EMDR) therapy, an interactive psychotherapy technique known as a successful treatment for trauma and PTSD, which Hartley uses himself.

“We just tell people there’s ways past it because not everybody wants to sit on a couch and talk to somebody that’s never been overseas,” he said. “That’s hard. If you’ve ever seen or been to a (Veterans Association) hospital, they’re intimidating and they’re just cold, that’s the best way I can describe them. … It’s not a good vibe.”

Hartley said he didn’t talk about his story at first, and the real catalyst for him reaching out was seeing his son emulating some of his behaviors.

Now he talks about his service and his PTSD to other veterans. He said it’s kind of strange going to new places for races and people already knowing his story, but knows it helps people connect.

Tony Elliot has never had a problem with the word “midget.” He enjoys being the “world’s smallest extreme athlete.”

Can't make this year's rally? Feel like you're there with these live webcams, shared with us courtesy of the City Of Sturgis Rally and Events …

Erik Hartley, flat track racer and founder of Evil Hours Racing, adjusts his helmet before practice on the J.C. Pappy Hoel Short Track Friday at the Jackpine Gypsies Motorcycle Club. Hartley served in the Air Force between 2006 and 2012, and was later diagnosed with PTSD.