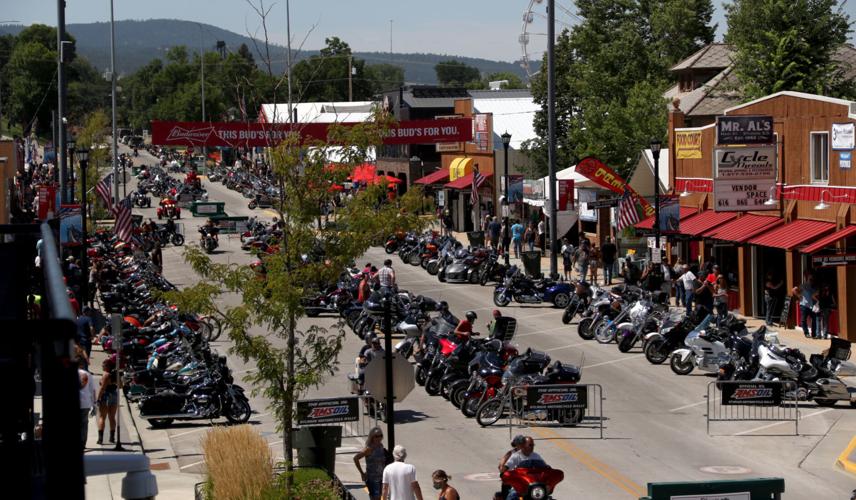 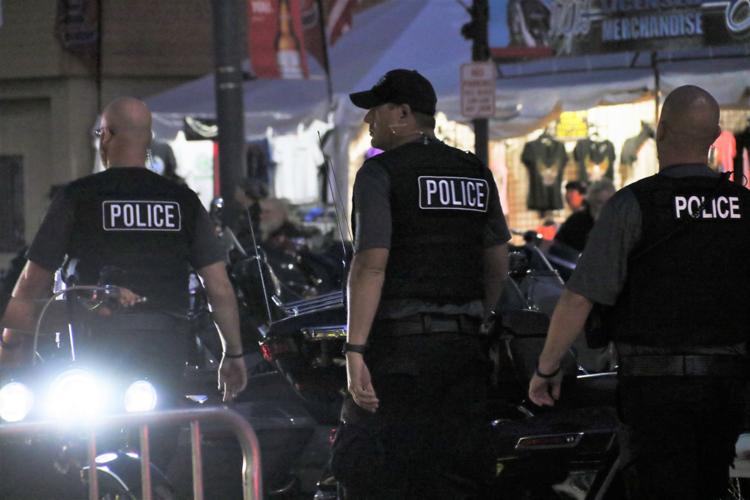 Sturgis police officers walk down Main Street during a Friday night patrol at the rally. Law enforcement reported an increase in misdemeanor drug arrests during the 80th rally.

With the 80th annual Sturgis Motorcycle Rally fully in the books, law enforcement and the Department of Transportation are releasing their final numbers.

The Department of Transportation released the 10-day total for the rally with 462,182 people entering, 7.5% down from last year’s rally.

Sturgis saw a 1.1% increase in people entering Aug. 9, but was down the rest of the week, particularly Aug. 12 and 15, the Wednesday and Saturday of rally week.

Five people died from vehicle wrecks throughout the rally, up three from last year.

Thomas Parins, 56, of Green Bay, Wisconsin, died from injuries from an Aug. 10 motorcycle crash on United States Highway 16A in Custer State Park.

The identities of the others who died have not yet been released, but include a 64-year-old man who died Friday evening on Sturgis Road in Piedmont and a 55-year-old woman who died of injuries in a one-vehicle crash Wednesday seven miles east of Hill City.

Both VanDewater and Meade County Sheriff Ron Merwin said there’s not really a reason or trend related to the increase in misdemeanor drugs, it just seems to be more prevalent.

The Sturgis Police department also reported 37 felony drug arrests, up seven over last year, and 10 more DUIs.  The data also shows there were 187 jailed from department arrests over 154 last year. However, the total non-traffic and traffic arrests, and parking citations was 558, just four over last year’s total.

A total of 396 people were booked into the county jail, an increase of 48 over last year. Of those, 143 came from state Highway Patrol, 60 from the Sheriff’s Office, four from the Summerset Police Department and six from the Butte County/Belle Fourche Police Department.

Some of the best photos from Rapid City Journal photographers at the 80th Annual Sturgis Motorcycle Rally.

The reason China used a spy balloon to collect intelligence

The reason China used a spy balloon to collect intelligence

Sturgis police officers walk down Main Street during a Friday night patrol at the rally. Law enforcement reported an increase in misdemeanor drug arrests during the 80th rally.