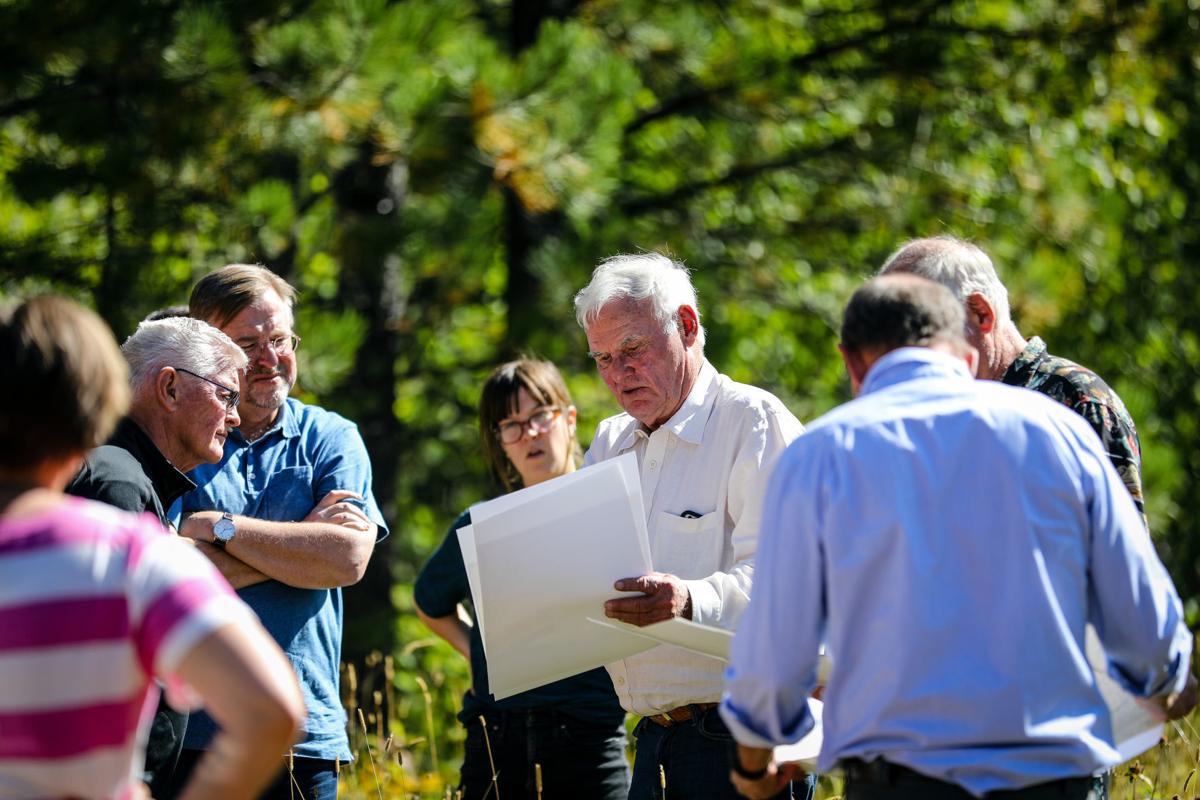 Don Valentine shows maps of a proposed mining area above Spearfish Canyon during a tour of the area Thursday for the state Board of Minerals and Environment. 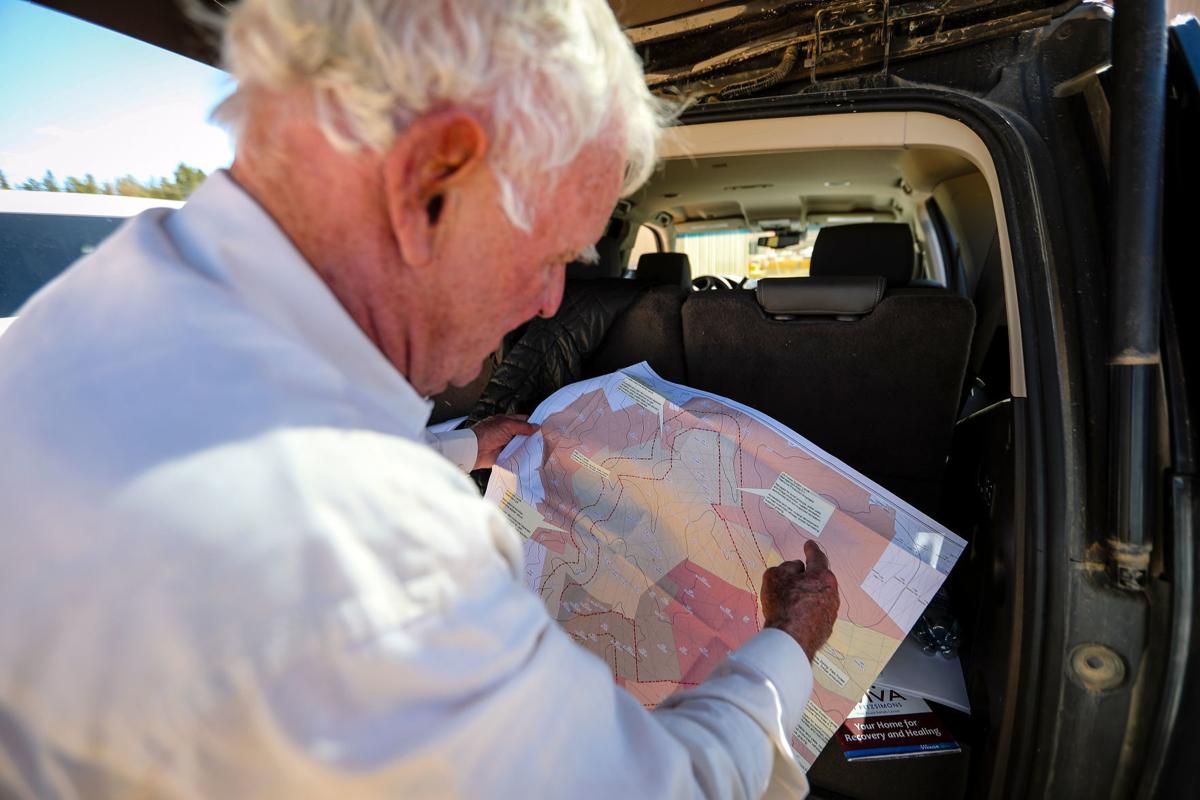 Don Valentine shows some of his application materials to the Journal on Thursday for a proposed mine above Spearfish Canyon. 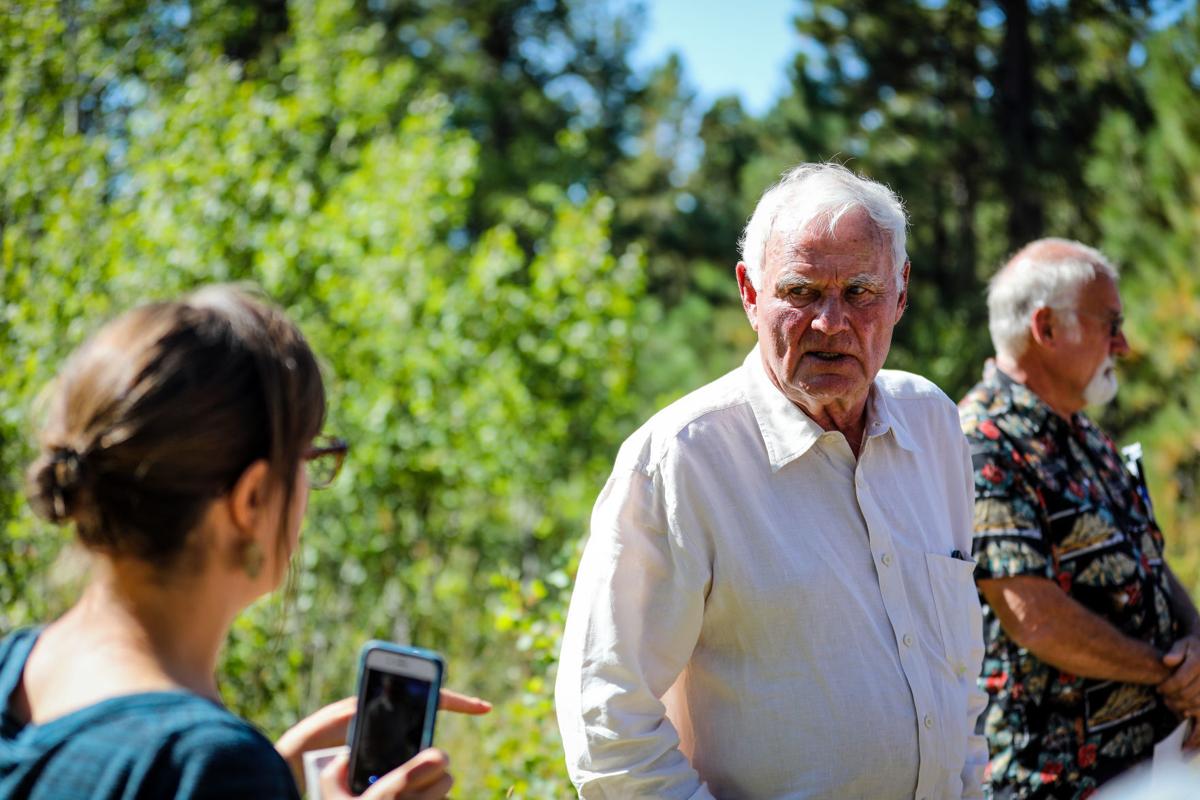 Don Valentine talks to participants during a tour Thursday of a proposed mining area above Spearfish Canyon.

Don Valentine, one of the managers of VMC LLC, gave an informational tour of the proposed project area Thursday to members of the state Board of Minerals and Environment. Afterward, in a Journal interview, Valentine said he began the application process Wednesday for a conditional use permit that the project needs from Lawrence County.

Amber Vogt, director of planning and zoning for the county, said Friday that the earliest the application could be presented to the county Planning and Zoning Board is Nov. 7, assuming the application is completed by the Oct. 16 deadline to place items on the Nov. 7 meeting agenda.

The application would have to go through the Planning and Zoning Board and the Lawrence County Commission, which would each hold public hearings.

“I tell people that more often than not, a conditional use permit will take three to six months to consider,” Vogt said.

Vogt said county officials considered a prior permit application from VMC in 2012, but the application never received a final vote from the county commission. At that time, the proposed project was called the Deadwood Standard.

The 2012 application drew public criticism, including from homeowners in Spearfish Canyon who expressed concerns about the mine’s potential to negatively affect their property values and cause noise, dust and environmental damage.

Brian Walsh, spokesman for the Department of Environment and Natural Resources, said Friday that VMC has a large-scale mine permit for the site that was issued to Homestake Mining Company in 1984 and was later transferred through several different companies. VMC has held the permit since 2012.

Although VMC has not yet conducted any mining, it has conducted exploratory drilling. Last March, state regulators announced that they had fined VMC and Valentine a total of $11,000 for drilling holes up to 700 feet deeper than allowed; for failing to provide the state Department of Game, Fish & Parks with a map showing the location of all historic, open mine workings so that the workings could be assessed for use by bats; and for failing to notify the GF&P of exploration activity within 100 feet of a historical mine shaft.

The gathering point for Thursday’s tour of the proposed mine area was the Wharf gold mine, a few miles west of Lead. Members of the Board of Minerals and Environment, employees of the Department of Environment and Natural Resources and some members of the public climbed into SUVs and pickups and drove several miles on a severely rocky dirt road that included some mud holes. Where Valentine stopped the group at the proposed project site, Spearfish Canyon was not visible through the forest, but the canyon rim was about a quarter-mile away.

The proposed mine area is on a high plateau above the eastern side of Spearfish Canyon. The spot is about a mile east from, and about 1,000 feet above, the Savoy junction and attractions including Roughlock Falls, Little Spearfish Falls, Spearfish Canyon Lodge and the Latchstring Inn.

Valentine told members of the Board of Minerals and Environment that gold can be found in shallow deposits on the plateau. He said the appropriate mining method for the site would include stripping layers of earth away to reveal the gold-bearing ore, crushing the ore and placing it in vats where a cyanide solution would be used to separate gold from the ore.

At the site of an ongoing $200 million cleanup of an abandoned gold mine near Lead, national and state regulators are entrusting a water-pollu…

An exploratory gold driller in the Black Hills has agreed to pay an $11,000 fine after being caught drilling holes that were hundreds of feet …

A local group will be downtown today to talk about proposed changes to Pennington County's hard-rock mining ordinance.

Gold search focuses on one long hole near Rochford

A Canadian company searching for gold near Rochford is drilling one long, diagonal hole this fall and winter, according to its top official.

A Rapid City company has received a third extension of time to reclaim a quarry it stopped mining 15 years ago.

There may be more gold in those hills.

Don Valentine shows maps of a proposed mining area above Spearfish Canyon during a tour of the area Thursday for the state Board of Minerals and Environment.

Don Valentine shows some of his application materials to the Journal on Thursday for a proposed mine above Spearfish Canyon.

Don Valentine talks to participants during a tour Thursday of a proposed mining area above Spearfish Canyon.