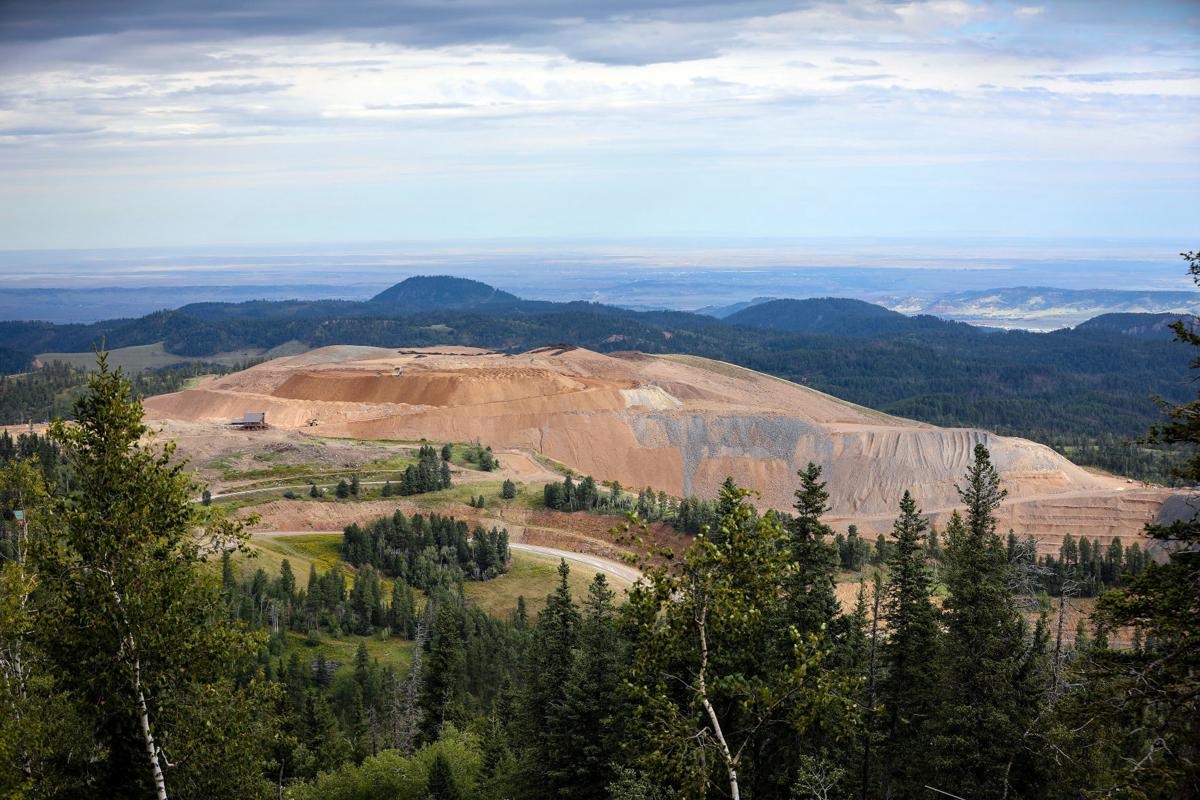 The Wharf Mine viewed from Terry Peak on Friday near Lead. 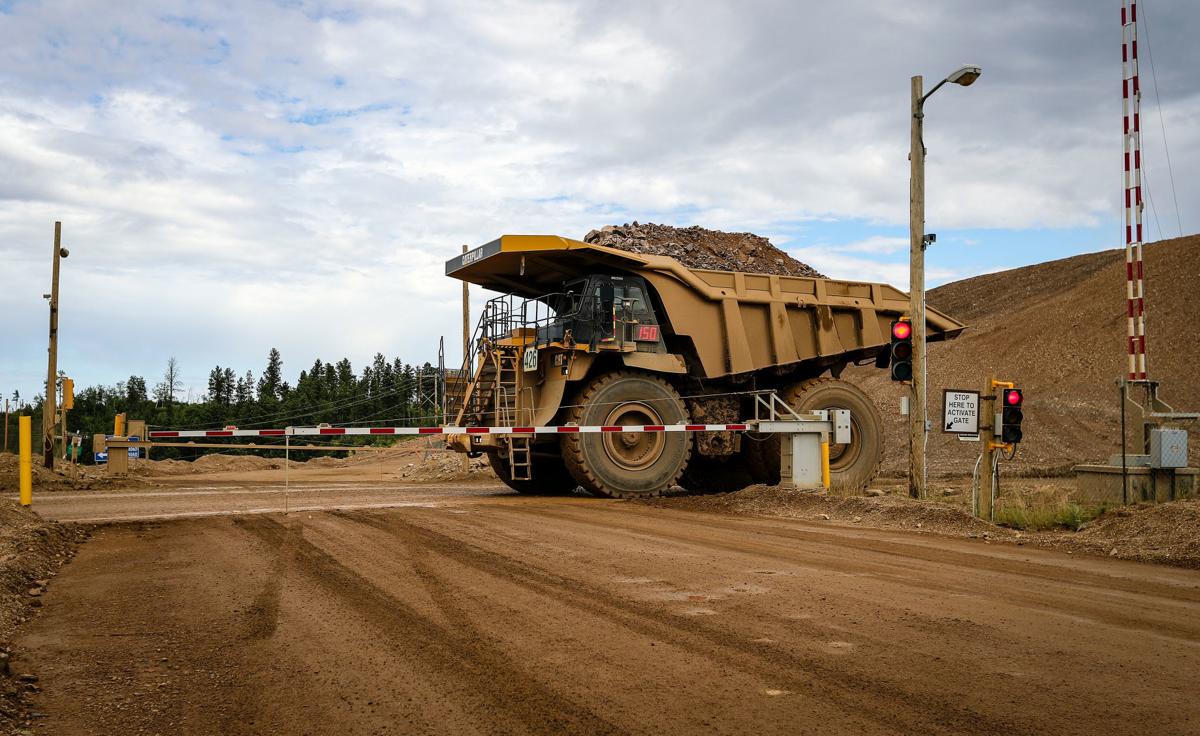 A truck crosses Wharf Mine Road at the Wharf Mine on Friday near Lead. 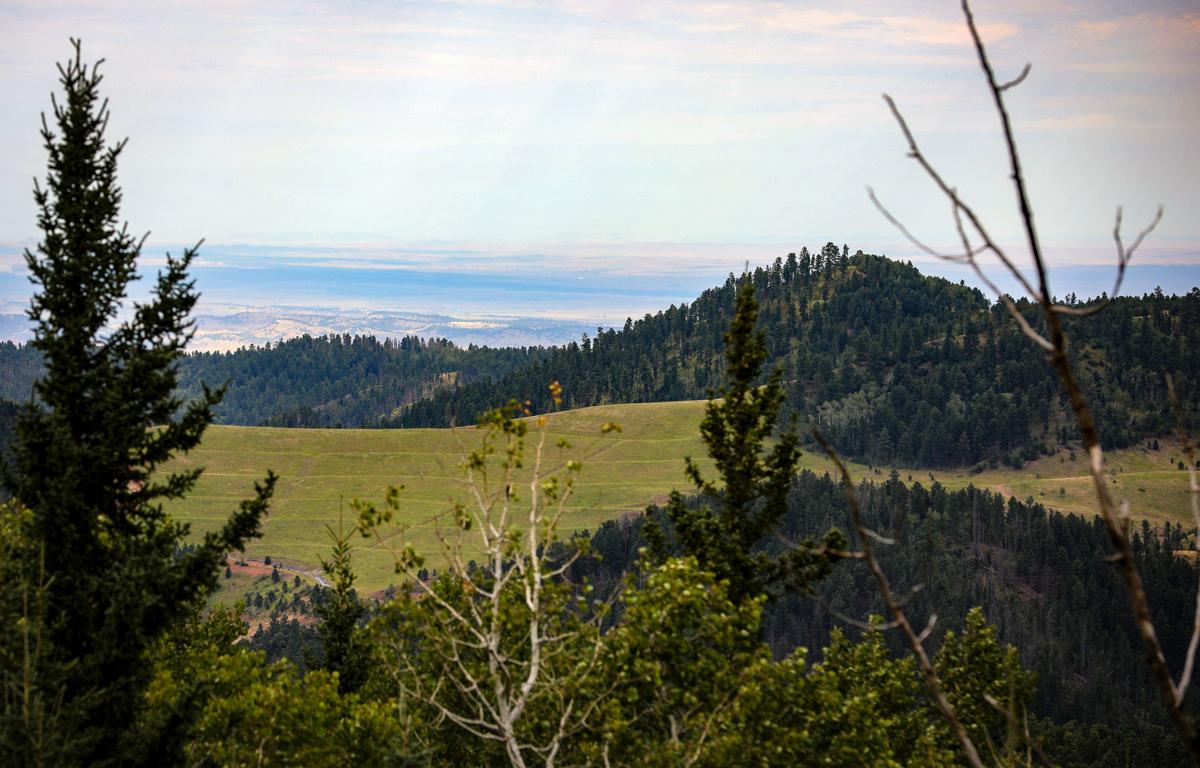 Grass has grown on the terraced hills at the closed Richmond Hill Mine near Lead.

LEAD | The remaining life of the only large-scale, active gold mine in the Black Hills is estimated to be seven years, so its owner plans to drill 125 holes in search of more gold around the edges of a nearby mine that was closed for polluting water.

Wharf Resources notified state regulators in July that the company plans to conduct exploratory drilling near the Richmond Hill Mine, which was closed 26 years ago. The holes will be up to 800 feet in depth and must be plugged according to state regulations, which often involves the use of bentonite.

By state law, the South Dakota Department of Environment and Natural Resources can place restrictions on exploratory drilling but cannot reject exploratory drilling unless the operator is in violation of the state’s mineral exploration laws. Wharf is in good standing with the laws, so the DENR issued a restriction letter to Wharf on Aug. 16, and Wharf hopes to begin drilling soon.

“As with most mines, Wharf strives for replacing reserves depleted by production,” said Matt Zietlow, environmental manager for Wharf Resources, in email correspondence with the Journal, “and mineral exploration is the tool to do that.”

Wharf Resources, which is owned by the Chicago-based Coeur Mining company, produced 76,840 ounces of gold and 50,575 ounces of silver last year at its Wharf Mine, just west of Lead near Terry Peak in the northern Black Hills. Coeur’s annual report to investors said combined sales of gold and silver from the Wharf Mine in 2018 were $96.5 million, and the mine had 208 employees.

The heap-leach extraction method is used at the Wharf Mine. Mined ore is crushed, piled on giant pads and treated with a cyanide solution to leach out the precious metals. Last year, 4.52 million tons of ore were processed and 2.04 million pounds of cyanide were used. The cyanide and water used at the site is retained in a closed-loop system.

LAC Minerals has since been acquired by Barrick Gold Corporation, which still owns and has reclaimed most of the Richmond Hill Mine by capping it, covering it with vegetation and installing a system that catches and treats water before it drains out of the site.

Twenty-five million gallons of water were treated at the Richmond Hill Mine last year, to adjust pH levels and remove metals such as arsenic, cadmium, selenium, nickel and zinc. The treated water is discharged into South Gulch, which flows into Cleopatra Creek (upon which the popular Devil’s Bathtub attraction is located) and into Rubicon Gulch, which flows into Spearfish Creek and through Spearfish Canyon.

The area where Wharf Resources plans to conduct exploratory drilling is centered on the Richmond Hill Mine. But the company is prohibited from drilling any lined or capped areas, so the drilling will occur around the fringes of the old mine.

Brian Walsh, a spokesman for the Department of Environment and Natural Resources, said state regulators do not expect the drilling to harm reclaimed areas.

"We have performed an inspection of the proposed exploration area. All drilling areas are located away from the former mine pit," Walsh said in email correspondence with the Journal. "Exploration drilling will neither impact any lined facilities at Richmond Hill that are in place for the purpose of mitigation of acid rock drainage, nor will exploration cause issues with the existing water treatment facilities at the site."

It’s unclear if Wharf Resources hopes to eventually re-mine Richmond Hill. When asked about that, Zietlow said by email, “This is the beginning step of a routine exploration project on lands adjacent to Richmond Hill, and it is far too early to make any predictions on anything given that drilling has not even been initiated.”

The Wharf Resources project is one of several exploratory gold-drilling projects that are either ongoing or planned in the Black Hills. Canada-based Mineral Mountain Resources drilled in the Rochford area last year and hopes to do more drilling there; Minneapolis-based F3 Gold is working on the terms of an environmental assessment that could allow it to drill near Silver City; and Reno, Nev.-based Dakota Territory Resources Corporation has said it hopes to conduct drilling in the Lead area.

There’s a helpful way to conceptualize the science experiment that is being prepared deep underground in the former Homestake gold mine, Fermi…

Gold production declines at Wharf Mine

Production and sales were down about 20 percent last year at the only active, large-scale gold mine in the Black Hills, according to reports f…

Spring has sprung, and it’s time to think about the great outdoors and its resources. I would argue that the most important natural resource i…

State wants to buy more of abandoned Black Hills mine

The state of South Dakota wants to buy 266 acres of an abandoned mine site from the Black Hills National Forest.

Panic ensued Wednesday in many quarters of the Black Hills when it appeared mining claims had been filed in the Black Elk Wilderness, but it t…

Pennington County Board of Commissioners took another step toward regulating hard rock mining in the county.

A Rapid City company has received a third extension of time to reclaim a quarry it stopped mining 15 years ago.

The Wharf Mine viewed from Terry Peak on Friday near Lead.

A truck crosses Wharf Mine Road at the Wharf Mine on Friday near Lead.

Grass has grown on the terraced hills at the closed Richmond Hill Mine near Lead.