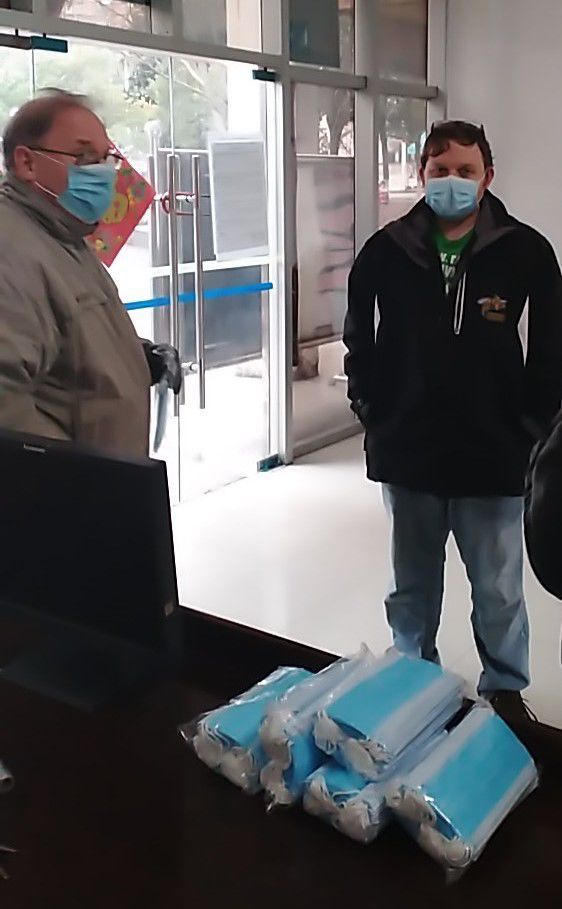 A security guard took this photo of Wesley Sorrell, in the black jacket and face mask, and a colleague preparing to buy boxed lunches. 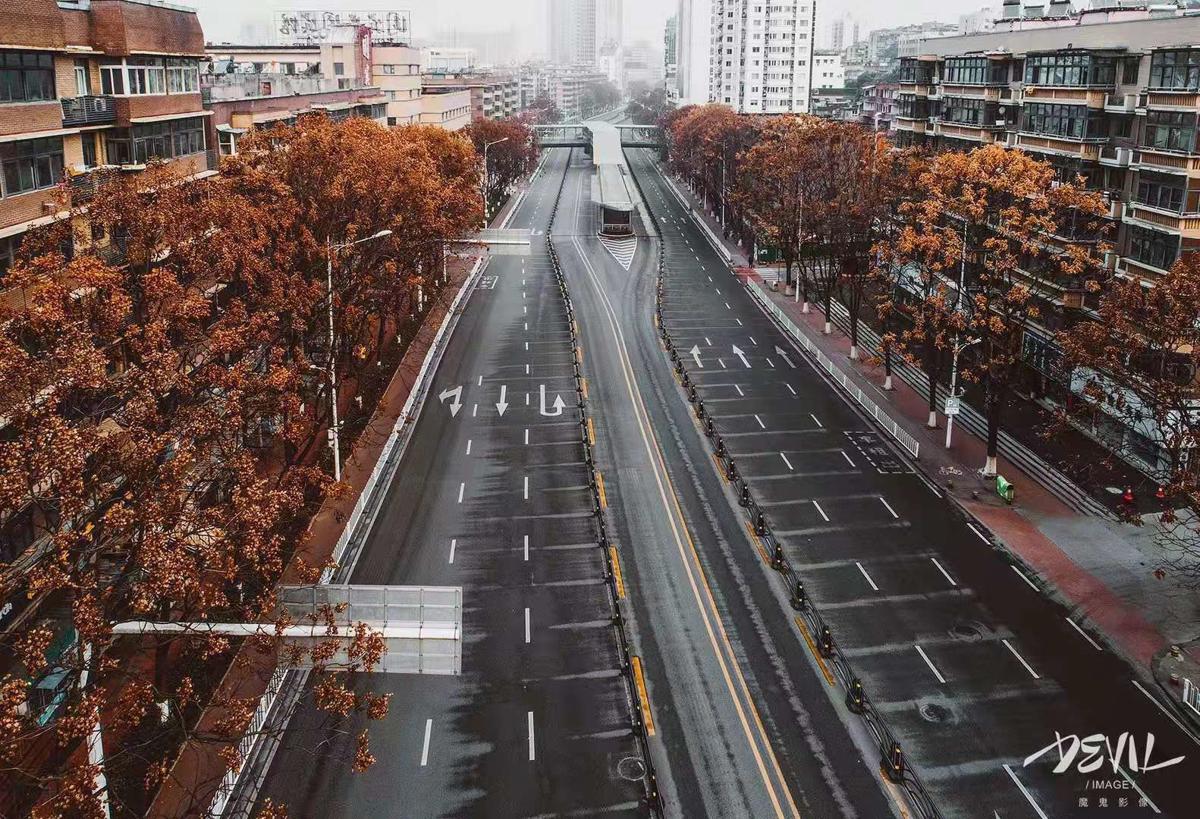 Wesley Sorrell provided this photo of Yichang in early February. The city of 4.1 million people looks deserted in the midst of efforts to contain the COVID-19 virus. 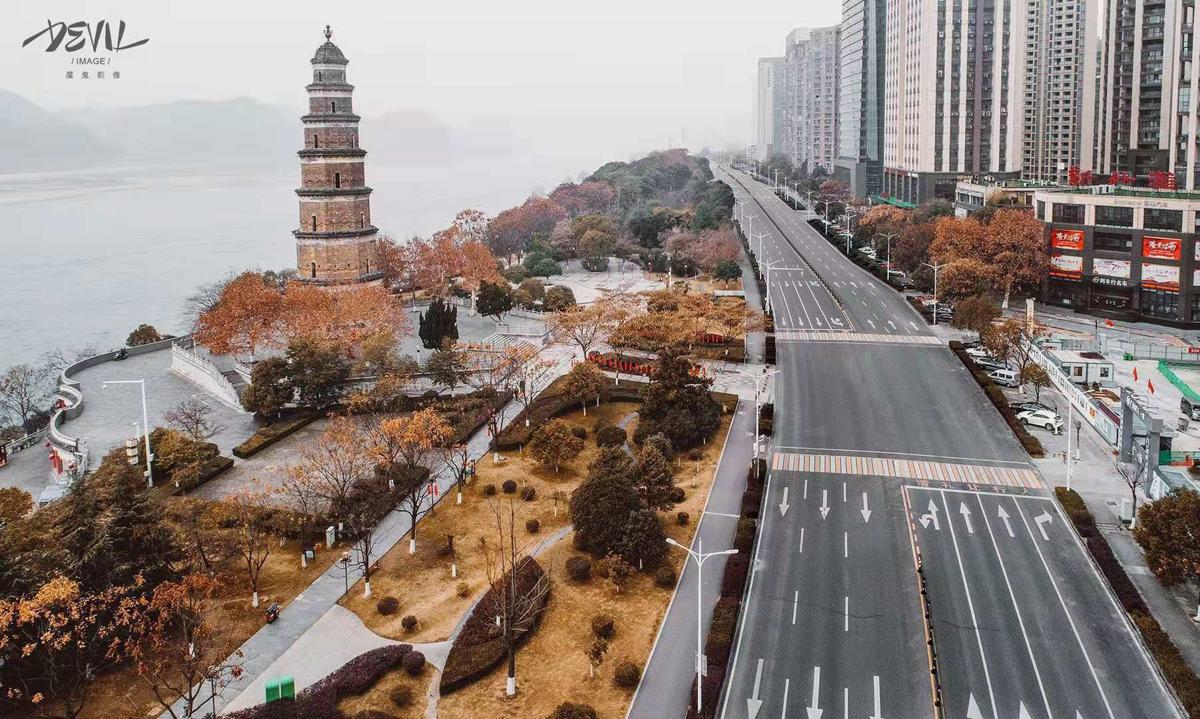 News about the deadly coronavirus has hit one South Dakota family especially hard. Wesley Sorrell, a 2018 graduate of Black Hills State University, is now quarantined in China’s Hubei Province where the outbreak began.

Sorrell, 24, teaches auditory and oral English at Three Gorges University in Yichang, which is two hours by high-speed railway from Wuhan, the city where the coronavirus, officially known as COVID-19, initially started in December 2019. COVID-19 has spread to more than two dozen countries, including the United States.

This is Sorrell’s first year teaching in China. He has not had a fever or symptoms of COVID-19 so far.

The Chinese government has placed the country’s hardest-hit cities — home to more than 60 million people — under lockdown in an attempt to contain the disease, according to Associated Press reports. Sorrell said all citizens of Yichang are required to take their temperatures by mercury thermometer and report them daily.

“I have been quarantined since Feb. 1, which means I am not allowed to leave the dormitory complex. The teachers’ apartments where I live is connected to a dormitory for foreign students,” Sorrell said Feb. 13 in an email. “I have heard stories of other foreigners being quarantined earlier than that.

“Thankfully no one I know has been infected by this virus. However, there was a scare when it was discovered that two individuals were infected just a half-hour walking distance (away) on the other side of the campus back in late January. All foreigners were quarantined shortly after that,” he said.

Sorrell said he has heard the number of COVID-19 cases in Yichang is decreasing. However, in the past few days there was an official government order to move as many as 1,000 potentially infected patients to a neighboring dormitory that was 5 to 10 minutes walking distance from his location.

“I don’t know how long I will be quarantined for. I heard talks that in two weeks it might die down, but there is a good chance we might be quarantined until April or May. It’s anyone’s guess at this point,” Sorrell said.

Meanwhile, Wesley’s parents, Gene and Sarah Sorrell of Black Hawk, and Wesley’s grandparents, Dean and Mary Ann Myers of Spearfish, communicate with him daily to get updates about his life and health.

“I spend most of my time in my apartment,” Sorrell said. “We are allowed to leave our rooms to go to the courtyard or to the roof, as well as the lobby where we have our temperatures taken daily. However, if we need groceries or boxed lunches from the cafeteria, those are delivered to us by workers and students who have special privilege to be outside. We pre-order the day before, and the next day they are delivered. But recently I was told to ‘stretch out your groceries,’ because the stores might be closing for two weeks.”

Improving his proficiency of Mandarin Chinese helps Sorrell occupy his time. He started learning the language while a student at BHSU, Dean said. His professor said Sorrell showed such an aptitude for the language that he might be a good fit to teach at Three Gorges University, and that interested Sorrell in going to China.

“For daily life, it consists of me waking up between 8 a.m. and 9 a.m. to report to a faculty member that I am healthy. Then I will either stay in bed or wake up to cook breakfast and prepare for the day as usual. The rest of the morning will be spent either talking to my friends and family back home or studying Chinese through the HSK series (Hanyu Shuiping Kaoshi, 汉语水平考试),” Sorrell said.

“I usually prepare lunch around 11:30 a.m. then either work on studying, play on my phone, or chat with my colleague and friends in China. Dinner is usually a boxed meal that I pre-order the night before through the cafeteria on campus, so that’s the only time I will leave my room. At night I might try doing some exercises — notably country line dances that I learned back in college. And just before bed I will chat with friends and family back home. Even though it sounds boring, I am not bored in the slightest,” he said.

The next semester is supposed to begin around March 1, but the spreading virus might push back the start of classes.

“Originally I was to come home early July, as my visa expires July 10 of this year,” Sorrell said. “However, there’s a chance that the semester might go until mid- or late July, which means I’ll need to get my visa extended.”

Even if he was able to leave China sooner, Sorrell’s family said he’s reluctant to do it.

“He keeps telling us he’s in the best place because if he were to get on an airplane, even going through a terminal he could be infected. He really thinks staying put is best thing for him to do,” Mary Ann said.

“We can’t get him out and we can’t go there. You wait and hope one of these days everything is OK,” Dean said. “We’re very proud of him, but we worry a lot.”

Sarah said her son fears that if he left, Three Gorges University would cancel his teaching contract. If he is rehired for a second year, Sarah said Sorrell wants to stay in China.

“He’ll plan on going back to China as long as he can,” Sarah said. “I think he likes the culture, the food. It’s so much different than being here in South Dakota.”

Sarah said her son is optimistic. She tells him that being quarantined during the COVID-19 outbreak is an adventure he can tell his grandchildren about someday.

“I am coping rather well since I consider myself an introvert, so I don’t need a lot of interaction to be happy,” Sorrell said. “My colleague is still in the complex so I can see and chat with him daily, and I also have other friends in China that I can talk to when my friends and family are getting ready for bed. As long as I keep doing what I’m doing, whether it’s studying Mandarin or cooking meals or even just goofing off, I believe that everything will be OK in the end.”

A South Dakota woman who is on a visa to teach English in a private elementary school in Busan, South Korea, is unable to work because her sch…

A security guard took this photo of Wesley Sorrell, in the black jacket and face mask, and a colleague preparing to buy boxed lunches.

Wesley Sorrell provided this photo of Yichang in early February. The city of 4.1 million people looks deserted in the midst of efforts to contain the COVID-19 virus.