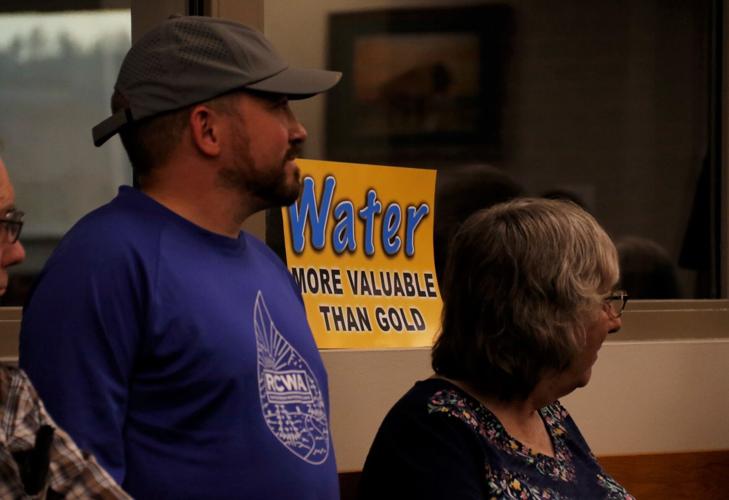 A sign that reads "Water more valuable than gold" sits on the windowsill of the Rapid City Council Chambers Monday night. 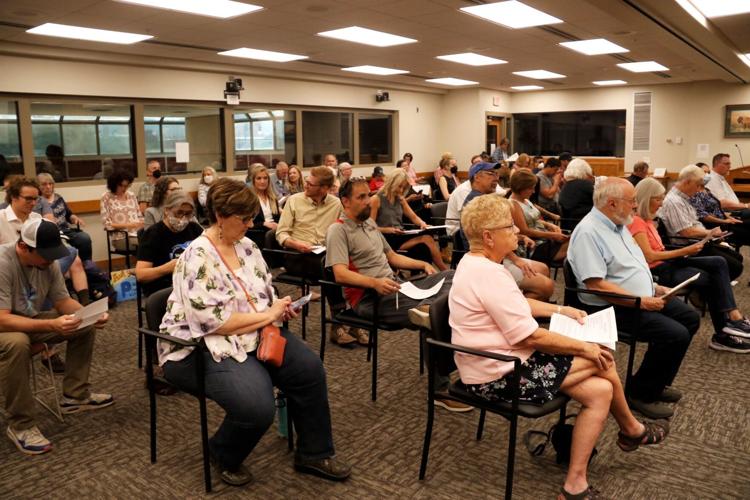 Members of the public wait for the Rapid City Council meeting to begin Monday night in council chambers.

The Rapid City Council is against the proposed Jenny Gulch exploratory drilling.

The council voted 7-2 Monday night to approve a resolution stating the city’s opposition to the project after a limited 40 minutes of public comment on the resolution split between proponents and opponents. Council members Lance Lehmann and John Roberts voted against the resolution. Council member Jesse Ham was absent from the meeting.

According to the Forest Service’s final environmental assessment, the project would not include mining, milling or processing. The project would last about one year from initiation through drilling and reclamation.

The resolution was approved with four sections removed that garnered the most controversy between council members.

It will not include, “Whereas, gold exploration could lead to gold mining, which involves the use of cyanide and other toxins and often leads to permanent acid mine drainage, which could go into Rapid Creek; and,” “Whereas, the current city water treatment facility is not equipped to remove this type of chemical contamination from the drinking water supply; and,” “Whereas, the Rapid City water treatment plant does not have the degree of real-time water quality monitoring that would alert operators to a spill or leakage event during exploration or subsequent mining; and,” and “Whereas, the Common Council of the City of Rapid City believes that gold exploration in the Rapid Creek watershed poses an unacceptable risk to the source of Rapid City’s drinking water.”

Council member Jason Salamun said he proposed the idea so that the council could vote together to show they do oppose risk to the city’s water source.

“I didn’t want to split our vote and send a message that even the Rapid City Council doesn’t agree on this,” he said. “Instead what I would rather do is put something on the table that we unanimously can agree on and send a message that says, ‘No, we do not support drilling or potential mining in this area,’ and we are actually unanimous on that.”

Council member Greg Strommen said he made the substitute motion because he did not find those sentences appropriate for the resolution, and that they are subject to dispute and debate.

“I think we can make our point, which is that we do not believe that mining in this area is a good idea for Rapid City,” he said. “None of us up here, though, is an expert on mining techniques or the science or engineering that goes into this.”

Strommen said he would not be comfortable putting out a resolution that did not have the correct science and information in it, and thinks it should be decided based on science.

He said he did agree with the other statements regarding the city’s stake in the watershed and area, and because of the potential risk, he opposes the forest service’s findings of no significance.

Council member Laura Armstrong said the city had an opportunity and obligation to object to the finding of no significant impact by the U.S. Forest Service on the Jenny Gulch exploration drilling project by F3 Gold.

“The fact is our city owns 89% of the water rights in Pactola,” she said. “Each and every one of us rely on this water to work, live and play in our community.”

Armstrong said it is the council’s civic responsibility to protect the critical infrastructure. She said the council should help create a federal recreation area to benefit everyone.

She said while the forest service believes there is no significant impact, there was no tribal input included and public comment was limited. Those who did not initially object to the project cannot object this time around.

Armstrong asked why F3 Gold fought so hard against the resolution, which is largely symbolic.

“The fact is their ability to market their claims is inhibited by the passage of this resolution which states our city will never tolerate a gold mine in the headwaters of its water supply,” she said.

Armstrong said the passage of the resolution signifies a potential gold mine in the main water supply will never be tolerated.

She said the easy choice would be to allow the resolution to fail, but passing it shows the council values its resources, took action to protect the water source, and listens to its community.

Armstrong’s remarks were met with cheers and applause from much of the chamber’s audience.

Time was limited to 20 minutes per side of the argument, although about 23 people signed up for the comment period. Twelve people spoke in favor of the resolution, including Justin Herreman who brought the draft resolution forward. Three members of the mayor’s Standing Committee on Sustainability also spoke.

Chair Alan Anderson said the committee’s recommendation was to approve the resolution. He said there’s a lot of frustration in the public with the project and the process for the project.

Four people, including two South Dakota Mines professors who spoke on their own behalf rather than the school’s, spoke in opposition to the resolution. Two people spoke during the opposition’s time to speak but said they were not for or against the resolution.

Larry Mann, who spoke representing F3 Gold, said this project is not a mining project. He said this is an exploration project. He said they know the area is gold-bearing. He said what happens next is figuring out how much gold is in the area, which required additional identification research studies.

He said there has to be a certain amount of gold per ton to move forward with mining. Mann said there would be eight to 10 years' worth of study to determine if there is anything worth pursuing.

A sign that reads "Water more valuable than gold" sits on the windowsill of the Rapid City Council Chambers Monday night.

Members of the public wait for the Rapid City Council meeting to begin Monday night in council chambers.