The second floor windows of the Rapid City Community Work Center have been boarded up.

Boarded up windows on Monday at the Rapid City Community Work Center. 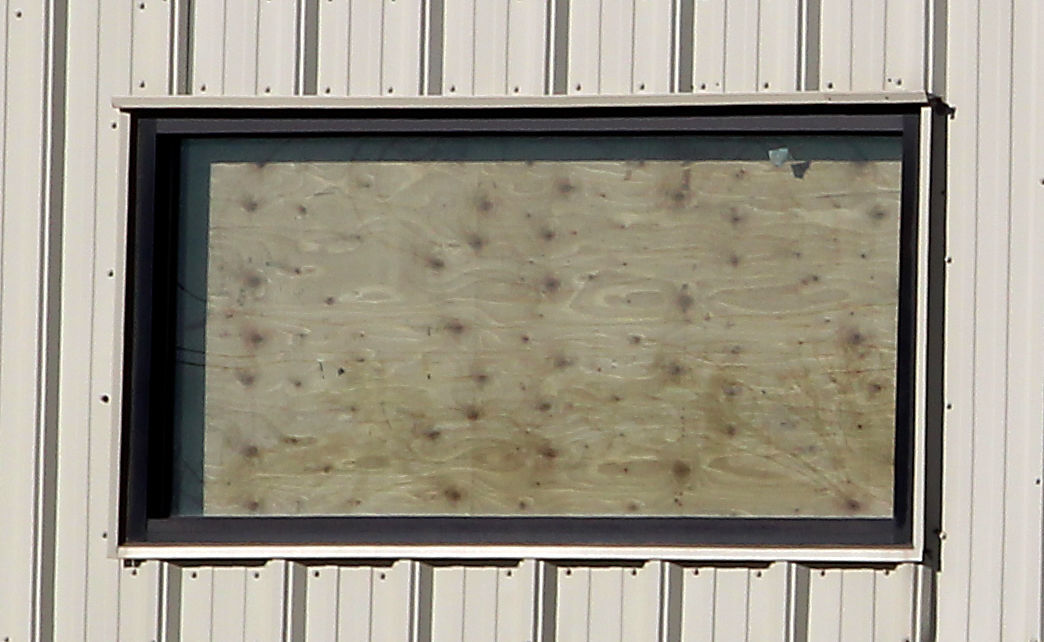 A close-up view of a boarded up window at the Rapid City Community Work Center.

Inmates and staff at the Rapid City prison are dealing with a coronavirus outbreak, two weekend escapes and now boarded-up windows.

The Rapid City Community Work Center had 45 active COVID-19 cases on Monday morning, according to data from the Department of Corrections. Two inmates say they expect there will be more than 100 cases by Tuesday.

The men’s minimum security facility is located at 2725 Creek Drive near Cambell Street on the east side of town. The second-floor windows are now boarded up on the inside with a material that looks like plywood, the Journal observed Sunday.

The Journal spoke with Jesse Feickert and another inmate during separate conversations on Monday afternoon. The Journal confirmed the identity of the second inmate but granted anonymity because he says he fears retaliation for speaking out.

The window coverings were installed Saturday after Ivan Good Plume escaped by breaking a second-floor window, both inmates said. They said another inmate escaped the same way several months ago.

“We’ve had two in the last couple months that have busted up windows and took off,” Feickert said.

Good Plume escaped Friday evening and was found on Sunday, according to the Department of Corrections. The DOC spokesman did not respond to questions about whether Good Plume escaped through a window and if the window coverings are permanent or will be replaced with a secure barrier that lets people see outside.

Keith Apple escaped the prison on Saturday evening and has yet to be found, according to the DOC. Both inmates said Apple left through a door on the first floor.

“People in here fear for their safety” and a “guy decided it was a better idea to bust out the window and go out the window,” he said.

The man said inmates often talk about the virus but “the risk is too high for most people” to run away.

The boarded-up windows “adds to the general depression of being in here,” he said. “You can’t even see outside.”

“I’m starting to feel like the punishment doesn’t match the crime anyone,” said Feickert, who could be paroled in a few months after serving time for drug possession and DUI. “I don’t even know what time of day it is unless I look at a clock.”

The inmates described a fearful environment where workers share little information with prisoners and are frequently changing which part of the prison is the quarantine unit. That description matches what female prisoners told the Journal this summer and fall, and what prison sources told the Argus Leader last week.

Both men said inmates were barred from going to their community jobs in March due to the pandemic but some were allowed to work at the fairground for the Central States Fair, which was held from Aug. 21 to Aug. 30.

The rooms at the prison have no doors and house up to 12 men on four triple-layer bunk beds, both men said. Feickert said he helped create a quarantine area by hanging up a tarp across a section of the prison. The second inmate said he and others lived in that quarantine unit when they worked at the fair. He said a visitor’s room on the first floor was also once used as a quarantine unit.

Both men said the tarp was eventually taken down and the second man said it was replaced with a wooden wall made of plywood and two-by-fours. Feickert said the tarp was blocking a fire exit while the second inmate said he thinks the tarp was a security issue since inmates could poke holes through it. The DOC did not respond to questions about this makeshift quarantine unit.

Both men said the first inmate to test positive was a man who arrived in late October with other inmates transferred from the “fishbowl,” or intake unit at the Jameson Annex in Sioux Falls.

Feickert said it’s dangerous to continue prison transfers during the virus and to have moved close contacts back into the main housing area.

“There was a high potential” the virus would spread this way, he said. “I know that as an inmate I don’t have a lot of rights but I do have some.”

“They must have underestimated how much it would fill up” and “they put us at risk” by moving the close contacts from the quarantine unit to the main one, the second inmate said. “They should have seen from the other prisons how quickly it out spread,” he said. "We were sitting ducks, we all knew this was going to happen.”

“There’s no social distancing” since the beds are so close together, Feickert said, adding that less than half the inmates wear the masks they are given. He said staff wear face masks, shields and medical smocks.

“It would have been nice if (staff) had communicated” about what was happening with the pandemic, the second inmate said. He said one DOC worker would yell at inmates when they asked questions.

The prison held a mass rapid testing event on Monday where inmates swirled a swab around their nostrils, both men said. Feickert said he’s had symptoms for the past two days, including a loss of smell and taste. The other inmate said he has a sore throat, cough and slight headache.

Both men learned they were positive Monday afternoon and believe their entire housing unit will be turned into another quarantine unit.

The Rapid City prison referred all questions to the DOC spokesman who did not respond to any questions.

South Dakota has seen its first case of a person dying from the coronavirus while incarcerated in prison.

Second South Dakota prisoner dies of COVID-19, 62% have had virus

A second South Dakota prisoner has died of COVID-19 as more than 60% of the prison population has contracted the virus since March, according …

The second floor windows of the Rapid City Community Work Center have been boarded up.

Boarded up windows on Monday at the Rapid City Community Work Center.

A close-up view of a boarded up window at the Rapid City Community Work Center.

Monday data from the DOC.