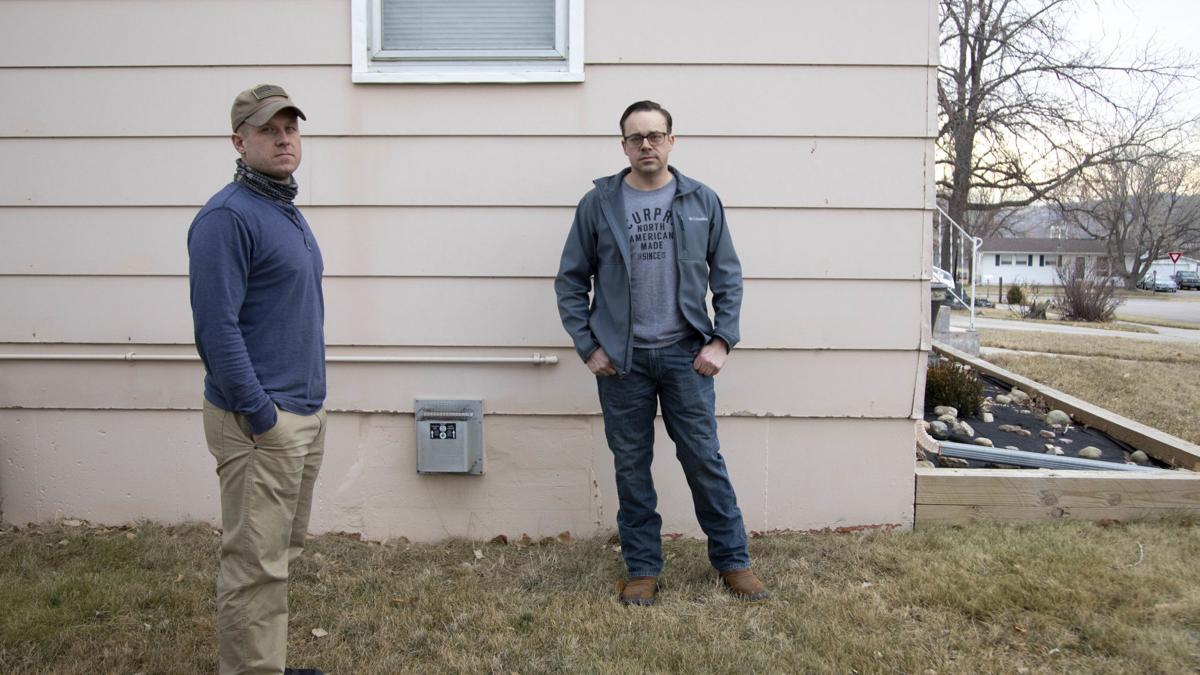 Abe Wheeler (left) stands Tuesday with Chris Sterling in the spot they found burglary suspect Cody Winstead before he fled on Jan. 7. 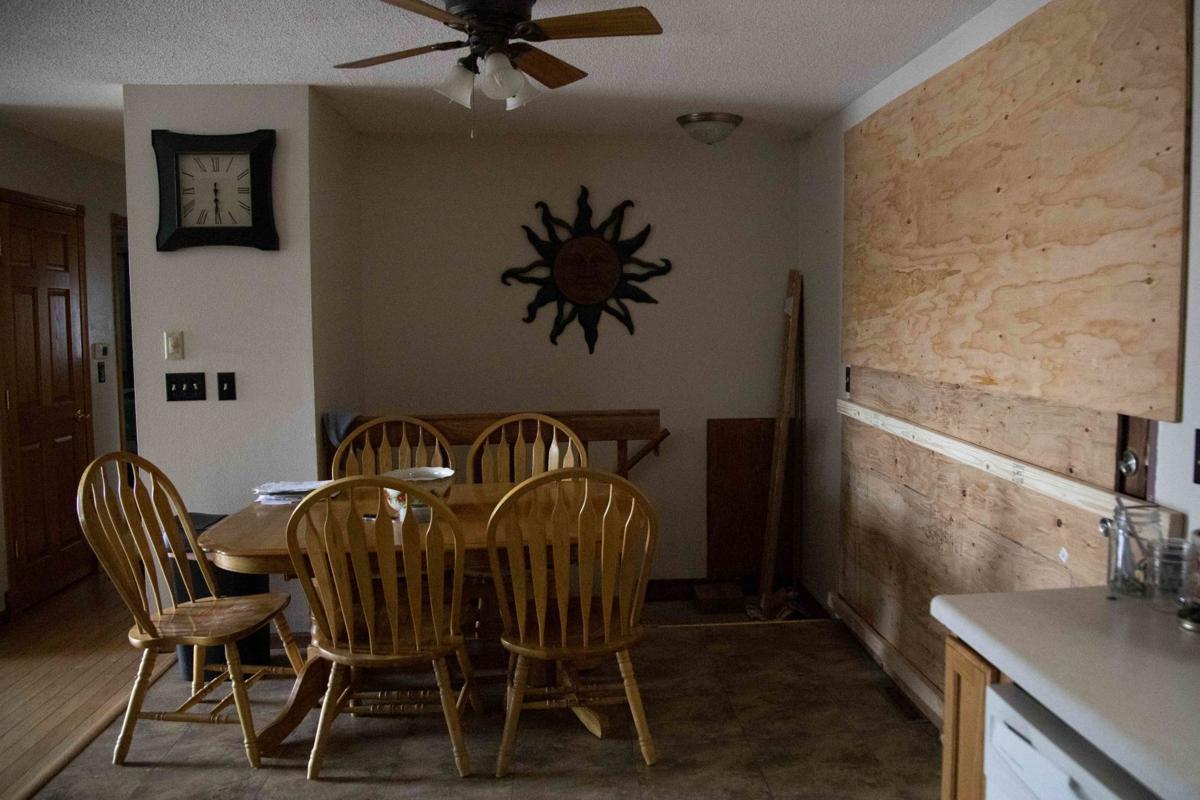 Wooden boards cover up a door where a person tried to break in during a burglary at Ashley Wentz's house in Rapid City. 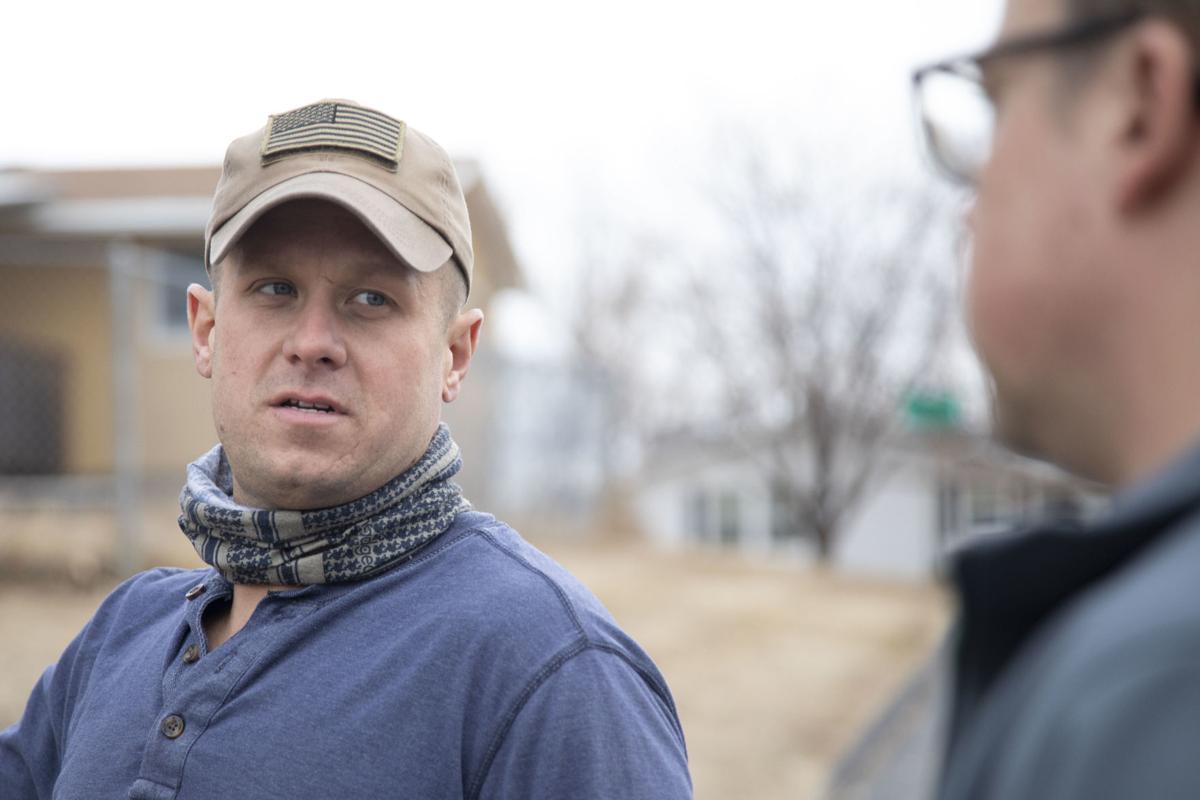 Abe Wheeler (left) talks with Chris Sterling as they recount the night they chased and detained a suspected burglar on Jan. 7. 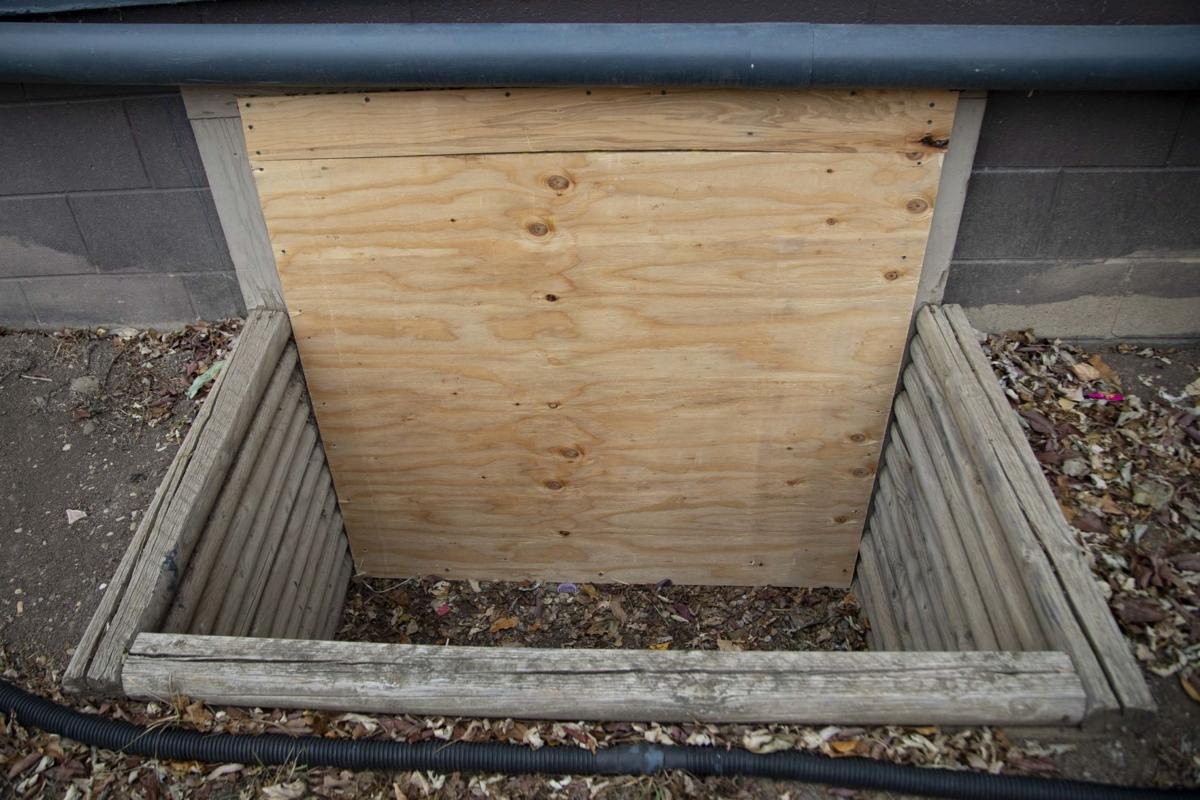 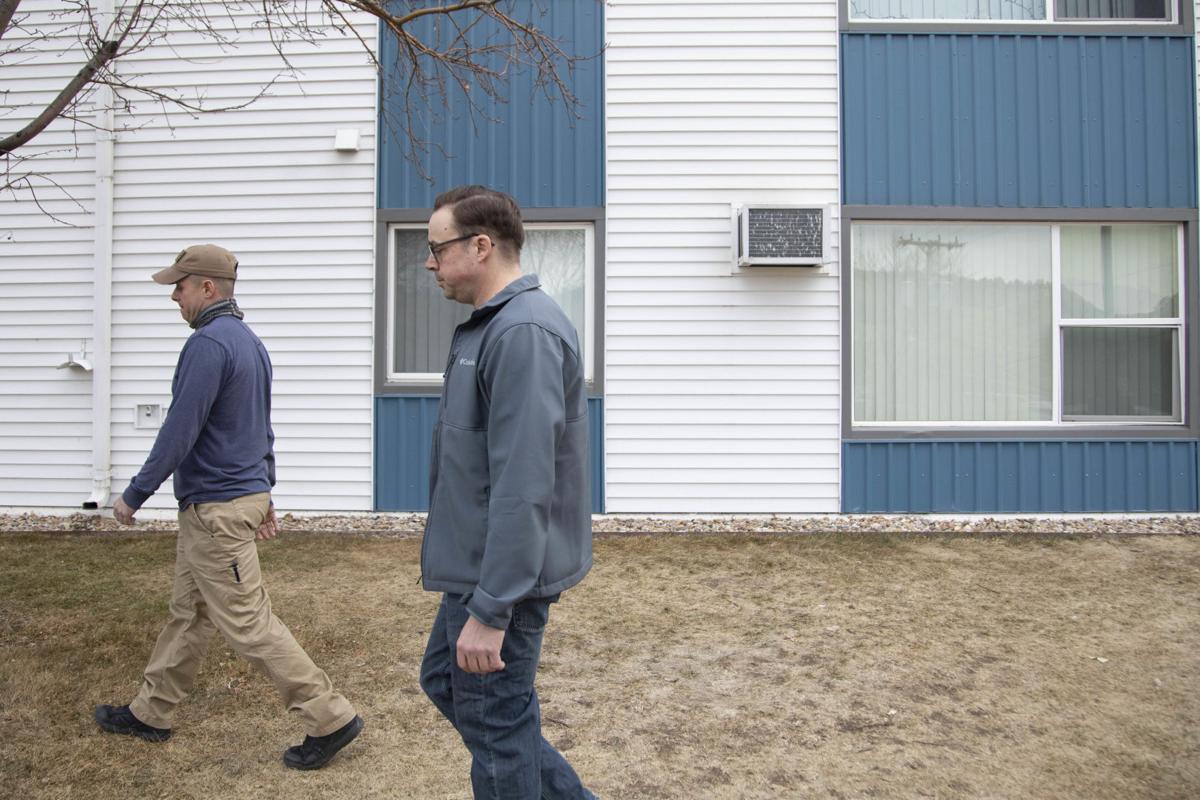 Abe Wheeler (left) and Chris Sterling walk the path they took to chase a burglary suspect. 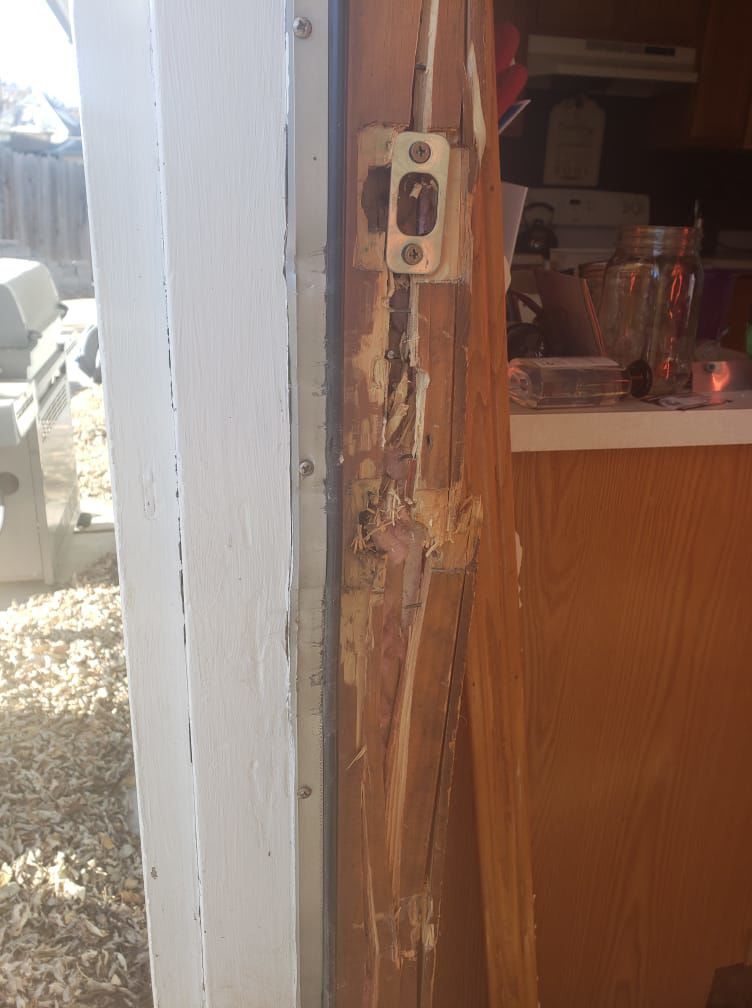 Abe Wheeler knew the burglary suspect he cornered last week might be armed with a stolen gun but he used his Air Force training to stay calm and focus on his mission.

“The guy was starting to get kind of antsy. I could see his feet moving and stuff, and just my experience in the military, I knew he was going to run so I unzipped my jacket, getting ready for the chase,” Wheeler said Tuesday in front of the Rapid City home where he found the suspect.

Wheeler, who works in Security Forces at Ellsworth Air Force Base, gave chase after the man slipped past him and three other neighbors.

The man stopped in front of a nearby apartment building, fidgeting and reaching into his bag. Wheeler said he took out but never pointed his handgun at the man.

"I went over there to that corner, pushed him against the wall and then I got him on the ground and the officers came,” he said while standing in front of the apartment building.

Officers found Winstead with a stolen bike and burglary tools, according to a news release from the Rapid City Police Department. They obtained a search warrant for Winstead’s nearby home on the 600 block of Lindbergh Avenue where they found more items that had been reported stolen. The officers also found Thomas Richards Steele, 22, and Kelly Longman, 19, inside the home. Both are from Rapid City and were arrested for existing warrants.

Winstead, Steele and Longman are the suspects in more than 40 burglaries in the neighborhood just north of the Horace Mann elementary school and park since November, said police spokesman Brendyn Medina.

Officers started noticing in December that there had been a large number of residential and vehicle burglaries in the area of Space Avenue, Galaxy and Minuteman drives, and North 7th Street, Medina said. Officers set up a burglary task force and realized there had been more than 40 reported burglaries in the area stretching back to Oct. 1. The task force increased the number of marked and unmarked police cars patrolling the area at night.

Wheeler, 37, said his girlfriend’s house was broken into three times and he knows of at least 15 more attempted or successful burglaries among her Antares Court neighbors.

The first burglary was on Dec. 31 when Wentz and Wheeler weren’t home. A neighbor called 911 around 2 a.m. to report seeing someone walk out of her home.

Nothing was stolen but “they just ransacked the house,” Wheeler said. “They broke my back door, they broke my garage door, and they went through every single thing in my house and in my garage.”

The couple was gone again on Jan. 4 when the neighbor texted them around 7 a.m. to say a window was broken and a light was on.

“They stole all of my electronics accept for one TV, and they literally walked out my front door” with the items,” Wentz said.

She said the burglars made off with two TVs, two sound bars, a computer, ring and an electric drill.

After the second burglary at his girlfriend's house, Wheeler took time off work and recruited fellow Airmen to patrol the area.

"Talking to the neighbors and just my experience as a military police office, I knew I could help out the cops,” Wheeler said, adding that it got personal once his girlfriend was targeted. “It was a problem that needed to be taken care of. No one could really sleep, everyone was on edge" in the neighborhood.

Wheeler, who is the kennel master at the base, and his group walked around the neighborhood during the day to ask others if they’ve seen anything suspicious and patrolled in cars at night looking for suspects.

Two of Wheeler’s friends stayed inside Wentz’s bedroom on Jan. 5 in case the burglars hit her house again.

Two burglars did enter the room that evening, Wheeler said. The two friends told the two burglars to drop what they were carrying and pulled a gun on them. The burglars shined a flashlight in the friends' eyes and fled.

Chris Sterling was driving back from playing racquetball the next afternoon when he saw an odd site near his home on Space Avenue.

“I saw a guy on a bike with a huge pack, and he also had something that was long,” he said.

Sterling, 39, arrived home and saw a giant mess in his garage and realized his mountain bike, laptop, tablets, headlamps, PlayStation, cash, rifle, handgun and other items were missing.

“I immediately put two and two together,” he said. “That guy was on my bike and he’s got my stuff,” including the rifle on his back.

Sterling drove after the man but couldn’t find him.

About $4,000 worth of items were stolen after the burglar opened his door with a screwdriver, Sterling said. He said he was most upset about losing the old-fashioned rifle, a gift from his father, and his computer, which had work on it that hadn't been backed up.

Sterling installed deadbolts the next day to protect his house because he thought the burglar would return to steal the stacks of video games and camera equipment he organized but left in the home.

Wheeler was patrolling during the day on Jan. 7 when he noticed a woman on North Seventh Street looking at the homes and taking notes.

He knocked on doors to tell residents to be careful and they mentioned they too had noticed people taking notes around the neighborhood.

Wheeler and Wentz parked their truck in the Avantara North parking lot that night when they saw motion detectors go off at a nearby home. They drove to the area and saw a man on a bicycle go by. Wheeler knew a bicycle had been stolen the night before and realized the man was wearing a shirt that matched the one his friends said one of the burglars was wearing on Jan. 5.

Wentz called 911 as Wheeler approached the man, who ducked between Sterling and his neighbor’s home on Space Avenue.

The man said he was looking for his dog, which he said was a pit bull, then a bulldog, then a pit bull, Wheeler said.

“His story kept changing, he was fidgety,” he said.

Sterling was pulling out of his driveway as Wentz told him what was going on. The two of them joined Wheeler in surrounding Winstead. They were soon joined by Sterling’s neighbor who held a shotgun but never pointed it at the suspect.

Wheeler said Winstead was afraid of the holstered gun he always carries, but he assured him that he had no plans to shoot him.

Winstead ran as he heard sirens arriving, according to Sterling, Wentz and Wheeler. Sterling and Wheeler gave chase as Wentz directed police where to go.

“This is weird for me, I’ve never done anything like this before,” Sterling, a machinist, remembers thinking as he chased after the suspect who may have been armed with his guns.

Winstead ran through the parking of the Liberty Baptist Tabernacle before stopping near the entrance of one the Northern Heights apartment buildings, Wheeler said. That’s where Wheeler detained Winstead until officers soon arrived on foot.

Wentz said she didn’t think police did enough to help the community, but Wheeler said he understands how busy officers are in Rapid City. Both said they wanted to give a special shout out to Officer Sonny Melanson for his help on the case.

Sterling said he holds no malice toward the suspect he helped capture.

"A lot of people asked me when I told them what happened if I wanted to hurt the guy when I came face to face with him," he said. "The answer is no."

"I don't value personal property more than human life. Stolen items can be replaced. Am I mad at him? Sure. Do I hate him? No. Generally speaking, I don't believe that people can be inherently bad. I think it's more accurate to say that people are just people and that they can become broken."

After four months, still no decision on whether Attorney General Ravnsborg will be charged in fatal crash

Four months after Attorney General Jason Ravnsborg hit and killed a pedestrian with his car, a prosecutor has yet to make a charging decision …

Abe Wheeler (left) stands Tuesday with Chris Sterling in the spot they found burglary suspect Cody Winstead before he fled on Jan. 7.

Wooden boards cover up a door where a person tried to break in during a burglary at Ashley Wentz's house in Rapid City.

Abe Wheeler (left) talks with Chris Sterling as they recount the night they chased and detained a suspected burglar on Jan. 7.

Abe Wheeler (left) and Chris Sterling walk the path they took to chase a burglary suspect. 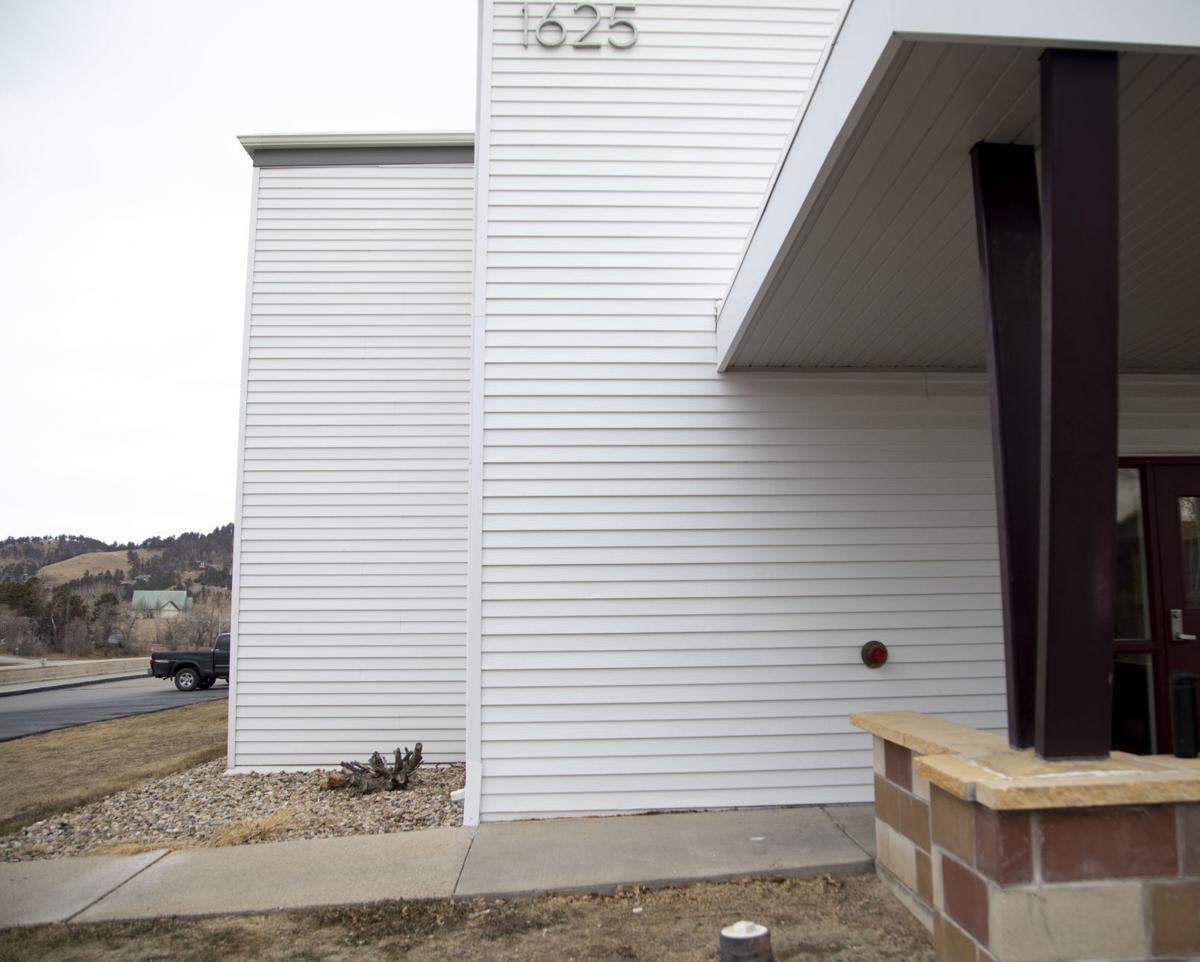 The apartment complex where suspect Cody Winstead was apprehended after fleeing on foot on Jan. 7. 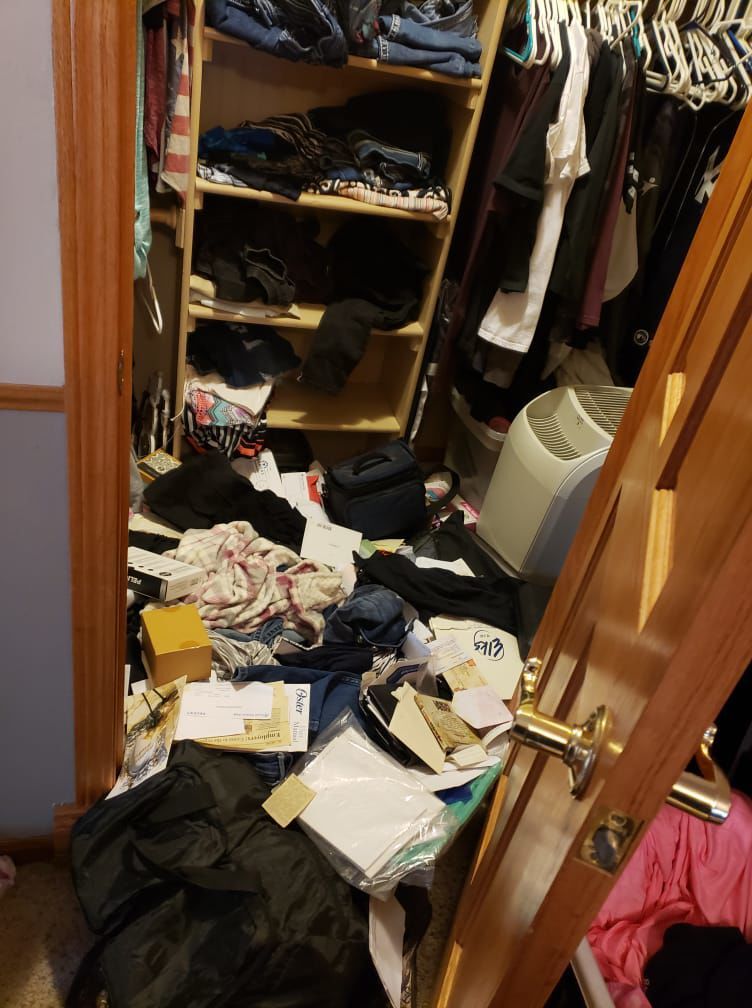 Burglars ransacked but didn't steal anything the first of three times they broke into Ashley Wentz's home.