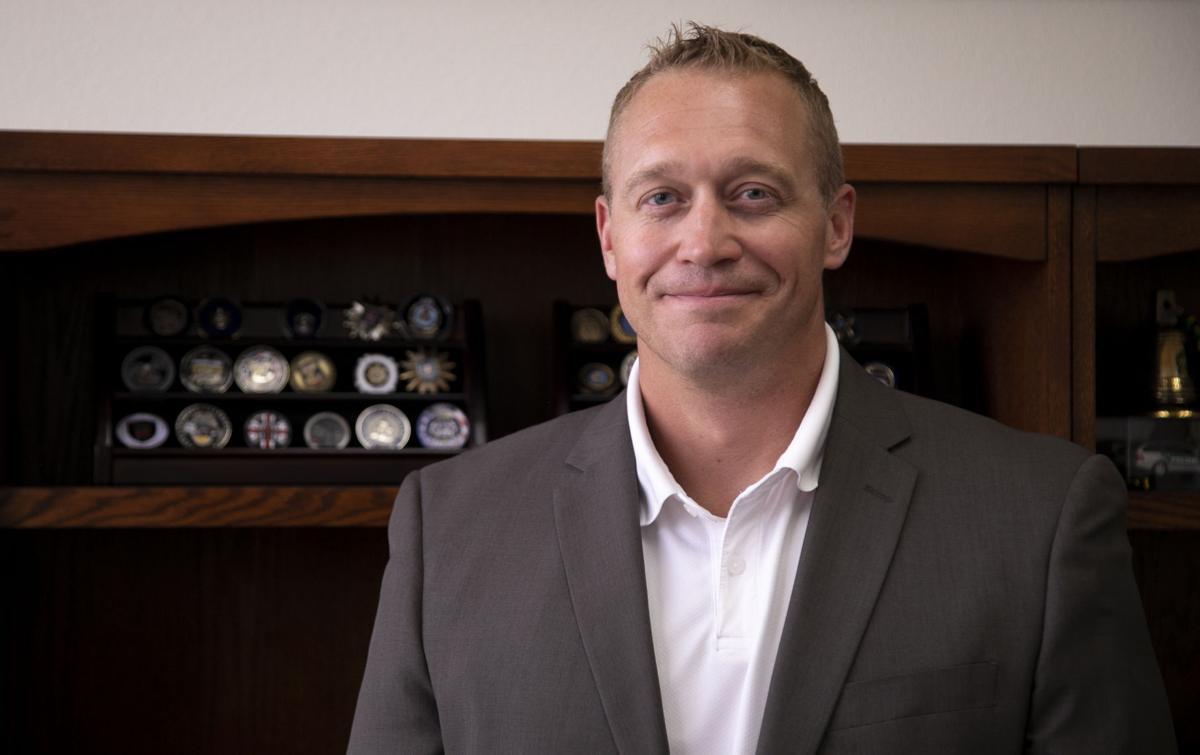 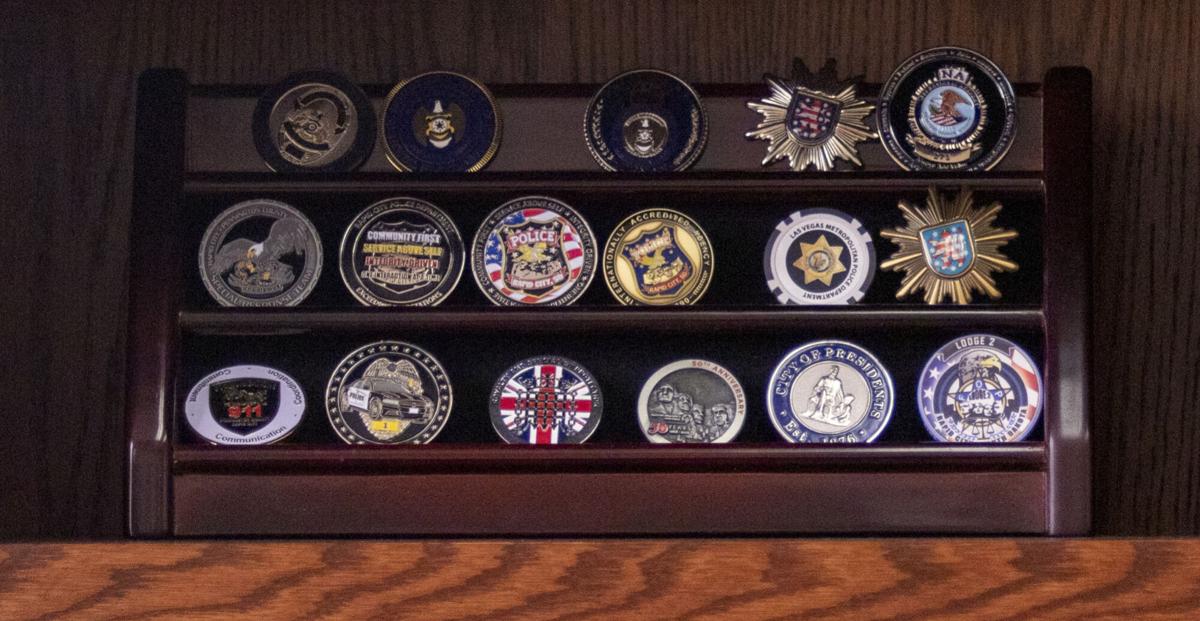 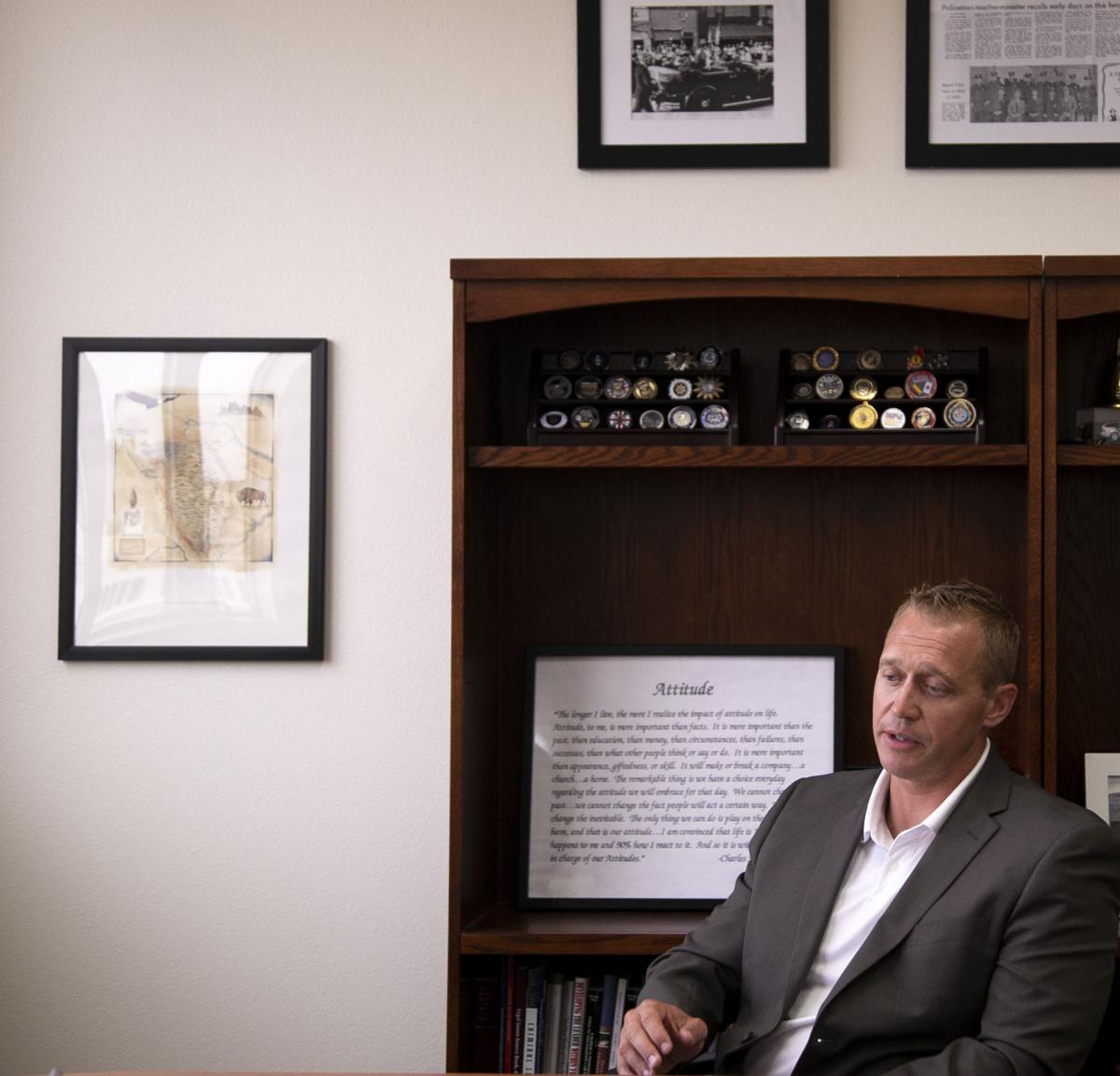 Rapid City Police Chief Don Hedrick reflects on his career from his office at the Public Safety Building. 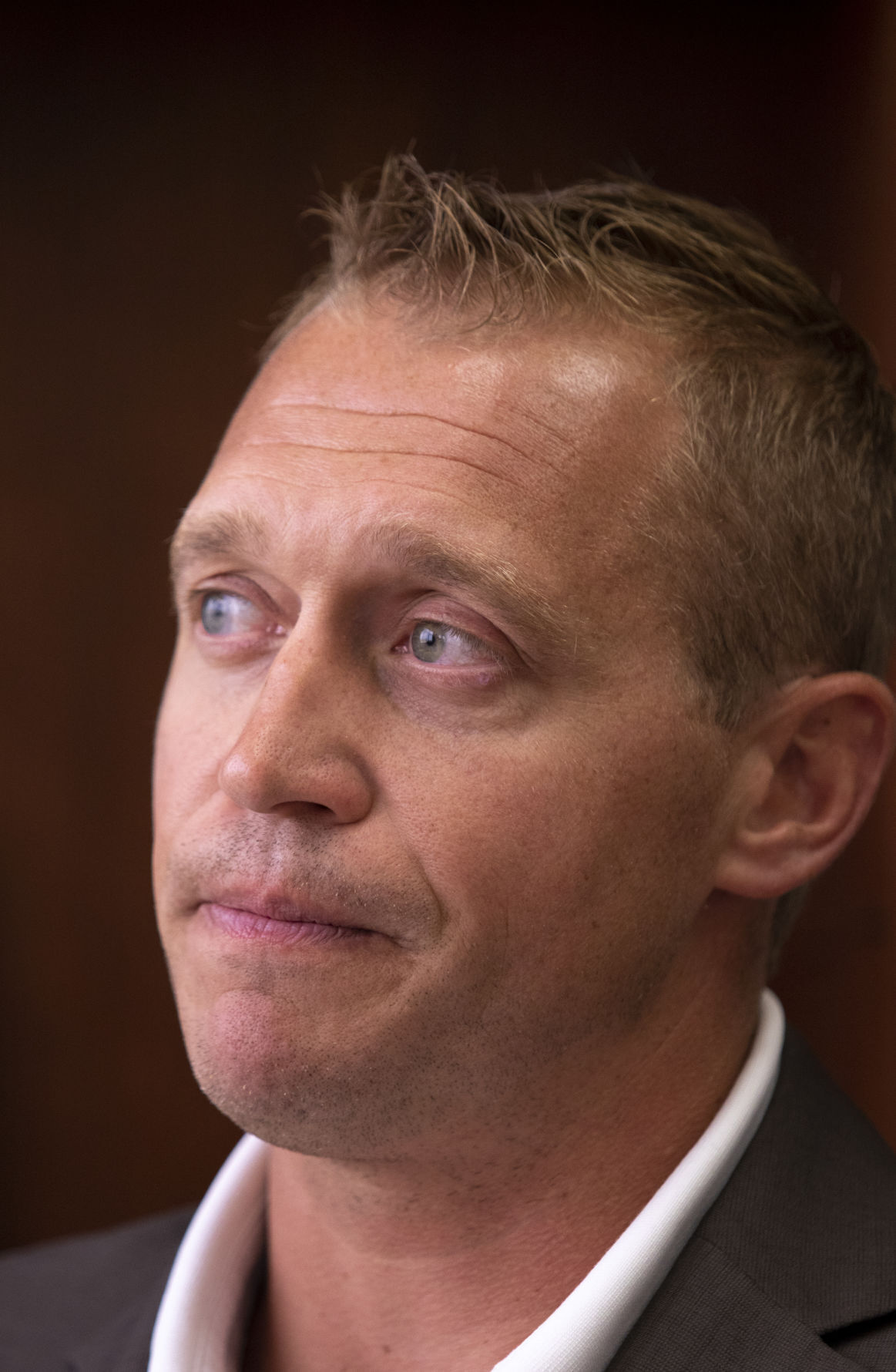 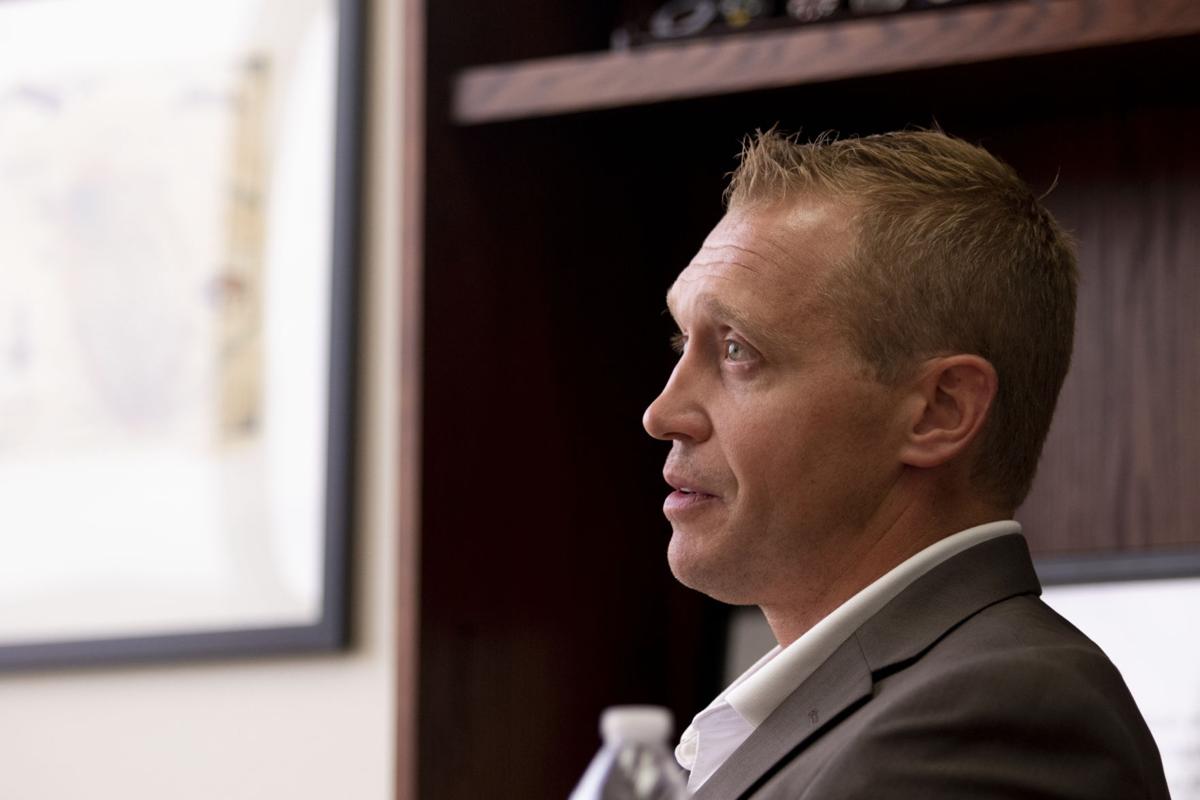 Rapid City Police Chief Don Hedrick speaks to the Rapid City Journal at his office at the Public Safety Building.

Editors note: This is part one of a two-part series. Next week's story will focus on programs and policies at the police department.

If not for a phone call and devoted recruiter, Don Hedrick might be a lawyer, not the new chief of the Rapid City Police Department.

“It was somewhat of a chance encounter, but it changed my life,” Hedrick said.

Hedrick studied criminal justice because he thought he might want to go to law school. But as graduation neared, he still wasn’t sure what he wanted to do.

One day his adviser at Dakota Wesleyan University told him he’d just missed a campus visit from a recruiter for the Rapid City Police Department. The adviser gave Hedrick the recruiter’s number and Hedrick gave him a call.

“He was an hour down the road, like gone. And he turned around just to talk to me. I was just so impressed by that,” Hedrick said last week at his new office — which he’s yet to fully move in to after being sworn in on Aug. 17.

Hedrick visited the department and did a ride-along with a patrol officer.

“Once I saw police work in action, and especially police work here at the Rapid City Police Department, I was hooked,” he said. “I really liked the idea of a fast-paced job where you weren't behind a desk and you had the opportunity to engage with people out in the community ... the feeling that I could provide assistance and help to others.”

Hedrick signed on as a beat cop after graduation and rose to the ranks of police chief 18 years later.

"I have kids now, and I want a better Rapid City for them ... (for) all of our families,” Hedrick said. “That’s what drives me every day to keep coming back to work is looking for a brighter Rapid City.”

Hedrick, 40, lives in Rapid City with his wife, Janet, and their three children.

He grew up in Lakefield, Minnesota, which he describes as "small, kind of in the middle of a cornfield.”

On cold days the town's police chief — Hedrick’s neighbor — would give him a ride to school in his patrol vehicle.

Hedrick was a three-sport athlete: he wrestled and played football and baseball. He spent summers working on farms.

He became the first in his family to go to college, which he paid for by working construction jobs in the summer and earning academic and football scholarships.

Hedrick was as an offensive lineman for the Tigers while earning a degree in criminal justice and minors in psychology and biology.

“I’s just something you will always have in your life," Hedrick said of his degree. “You might lose money or a job, but you're always going to have your education."

Hedrick no longer plays football but still prioritizes fitness as well as healthy eating and getting enough sleep.

He and Janet enjoy working on home-improvement projects and spending time on their boat at the lake.

“You’ve got to have a way to decompress and get away from some of the stress,” Hedrick said.

Rising through the ranks

Hedrick began as a patrol officer in 2002. He and some fellow officers later decided to earn their master’s degrees from the University of South Dakota as a way to help move forward in the department.

“That was helpful because we were able to work on group projects together and encourage each other to keep going because after working a night shift, it was difficult to go home and type a paper,” he said.

Hedrick earned his degree in administrative studies and became a detective, mostly working on theft, burglary and assault cases.

He was later promoted to the rank of sergeant, where he supervised patrol shifts before becoming a lieutenant who oversaw a shift plus the north side of town.

"I really just enjoy helping people and watching that light bulb come on,” Hedrick said of why he likes supervising officers. “Helping them succeed is just something that I enjoy and also rallying a team around a mission."

He became assistant chief in 2015, where he continued to oversee support services while also assisting Chief Karl Jegeris.

“How can I ask others to step outside their comfort zone if I’m not willing to do it myself and how can I ask the police officers that I supervise" to do the same, he said.

Hedrick became interim chief when Jegeris retired June 3 and was named police chief by the City Council on Aug. 17. He will be paid $118,733 a year.

He said the police department has fluctuated between having three captains vs. two captains plus an assistant chief. He’s decided to stick with the former model.

Hedrick will be balancing his new job with spending time with his family and completing a Ph.D. in public health from Johns Hopkins University.

Hedrick is conveniently finishing up a class called “leading organizations” and will be taking a course on solving the opioid crisis this fall.

He said some classes are prerecorded, but he will sometimes have to attend live ones. If a major public safety crisis occurs during one of his live classes he would leave class.

Hedrick said he will be taking one class a semester, and his studies will focus on the origins of violence and how to break cycles of violence. He said he hopes to learn about successful prevention and violence interruption programs in other cities and see if they can be implemented here.

“I’m going to have an opportunity to work with professionals and see for myself best practices and I'm excited to bring that stuff back here to Rapid City,” he said. ​

After 20 months of discussions, a Rapid City group is working with the police department to implement reforms and new projects it created to i…

Rapid City Police Chief Don Hedrick reflects on his career from his office at the Public Safety Building.

Rapid City Police Chief Don Hedrick speaks to the Rapid City Journal at his office at the Public Safety Building.