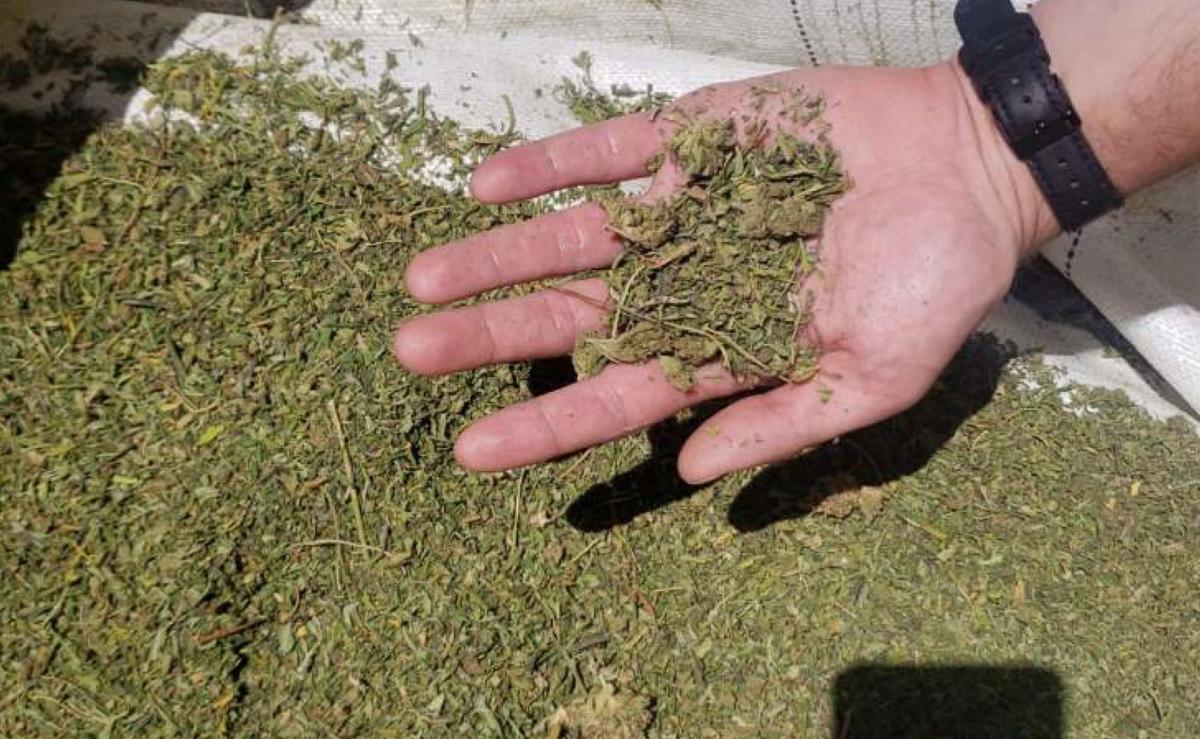 This photograph was included in an October 2018 lab test provided by lawyer Matthew Kinney. Kinney said the test and photograph is from a sample of the product his client was found with.

Lawyer Matthew Kinney gave the Journal an October 2018 lab test that includes these test results, which says the tested product has .29 percent THC. Kinney said the tested material was a sample of the product his client was found with in South Dakota.

A Colorado man who says he was delivering legal hemp to Minnesota is facing up to 36 years in prison after being arrested last month in Jackson County by South Dakota troopers who accused him of possessing and selling marijuana.

Robert Herzberg, a 41-year-old from Red Feather Lakes, is charged with intending to distribute marijuana, possessing more than 10 pounds of the drug, and ingesting marijuana and cocaine, according to his criminal complaint. If found guilty, he could be sentenced to up to 15 years in prison on the possession and distribution charges, five years for the cocaine ingestion charge, and one year for marijuana ingestion.

Herzberg's arrest and charges is the latest incident illustrating how South Dakota's hemp and CBD oil laws are distinct from many other states and can cause confusion about which products are legal. His case also comes as state lawmakers study the potential risks and benefits of industrial hemp and Gov. Kristi Noem renews her skepticism of legalization by asking them to consider 315 questions when considering legislation.

"They don't have a case," Matthew Kinney, a defense lawyer from Spearfish, said of the marijuana possession and distribution charges against his client. "We are so behind the times right now with our laws and immediate action needs to be taken with the legislature."

Kinney provided the Journal with an October 2018 lab test that includes a photograph of a dry green plant that he says is a sample of the product his client was transferring from Colorado. The results say the plant has .29 percent THC.

Kinney pointed to a May memorandum from the U.S. Department of Agriculture that says the 2018 Farm Bill says while states and tribal nations can make it illegal to produce hemp, they can't block the transportation of federally legal hemp (hemp with .3 percent or less THC), and this federal law and ruling should trump state law. He had no comment on the ingestion charges.

But Attorney General Jason Ravnsborg argues all hemp and CBD-oil products are illegal in South Dakota, while some state's attorneys, including Pennington County prosecutor Mark Vargo, say hemp-derived CBD oil is legal as long as it has no THC.

"Industrial hemp and all of the derivatives of marijuana are still illegal in South Dakota," Tony Mangan, spokesman for the Highway Patrol, said about the case. He said troopers always send suspected drugs to be tested in the state lab.

Noem vetoed a bill in March that would have legalized industrial hemp in South Dakota, which is one of three states (plus the District of Columbia) that doesn't allow hemp cultivation, according to the National Conference of State Legislatures. Cultivation is occurring on some Native American reservations in South Dakota, where growers have asserted tribal sovereignty and federal law.

A trooper pulled Herzberg over July 16 on Interstate 90 in Jackson County for allegedly driving 86 mph in an 80 mph zone, according to police reports. "I could immediately smell the strong odor of raw marijuana" inside the Chevrolet Tahoe, the trooper wrote.

Using smell as probable cause, the trooper searched the car and found "two large white sacks that contained a green leafy substance that looked and smelled like raw marijuana" and field tested positive for the drug, the reports say.

Herzberg was arrested and brought to the jail in Winner while another trooper seized the product, which weighed 292 pounds, according to the reports. Herzberg agreed to be interviewed and take a urine test, which tested positive for marijuana and cocaine, according to a lab test.

Herzberg told a trooper he was hired by Russell Lester to deliver the product, was told it was raw hemp, and had seen a lab test that showed its THC content, the reports say.

This is a "completely victimless crime and you have someone looking at serious jail time for driving something he didn't know was illegal" in South Dakota, said Lester, who hired Herzberg to transport hemp from an organic Colorado farm to a CBD-oil processing company in Minnesota.

Lester, who owns a CBD-oil processing company in Boulder, also referenced lab testing that showed the product was "100 percent legitimate." He said the company in Minnesota required that they see such testing before they bought the product.

"I feel so bad" for Herzberg since it was his first time delivering hemp, he said. Lester said he will make sure to tell Coloradans delivering hemp not to pass through South Dakota, which he described as driving "into a death trap."

When asked about the ingestion charges, Lester said the accusations aren't relevant to the issue of whether Herzberg was transporting legal hemp or marijuana.

Joe Radinovich, executive director of the Minnesota Hemp Association, said the company that was set to receive the hemp is a member of his organization and spent $23,000 on the hemp that would be turned into $100,000 worth of CBD-oil products.

Radinovich said the organization is warning its members not to let employees drive through South Dakota and in a Monday news release called for Herzberg's charges to be dropped, South Dakota to legalize hemp, and more legal clarity from the federal level.

"Because of this patchwork of laws and South Dakota's position on the laws, it is impacting the legal transaction of hemp in other states that surround it," Radinovich said. "Risk and uncertainty scares people" from entering the profitable hemp industry, he added.

Radinovich said he's never met Herzberg and couldn't speak to his ingestion charges, but many hemp companies have to hire independent drivers since most trucking companies, who have trained and drug-tested drivers, fear unclear and patchwork laws.

Herzberg, who is out of jail on a $5,000 bond, is scheduled for an initial appearance at the state court in Kadoka at 9 a.m. Wednesday.

While SD waffles, most other states move ahead with hemp

This photograph was included in an October 2018 lab test provided by lawyer Matthew Kinney. Kinney said the test and photograph is from a sample of the product his client was found with.

Lawyer Matthew Kinney gave the Journal an October 2018 lab test that includes these test results, which says the tested product has .29 percent THC. Kinney said the tested material was a sample of the product his client was found with in South Dakota.