Become a Member
Read Today's E-edition
Share This
From meth to recovery: Cudmore seeks solace in Rapid City
Share this
1 of 2 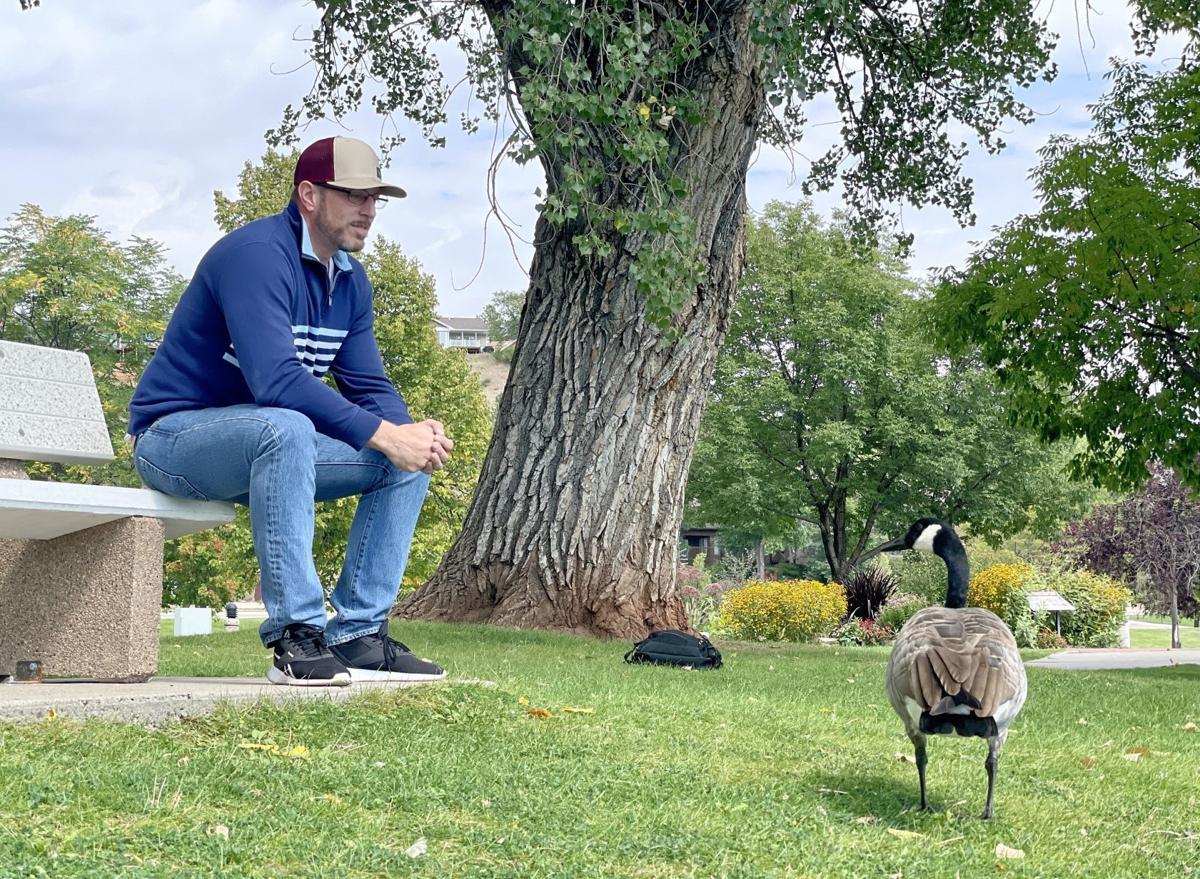 Christopher Cudmore watches a Canada Goose as it scours the grass for bits of French fry at Canyon Lake Park in Rapid City on Tuesday. 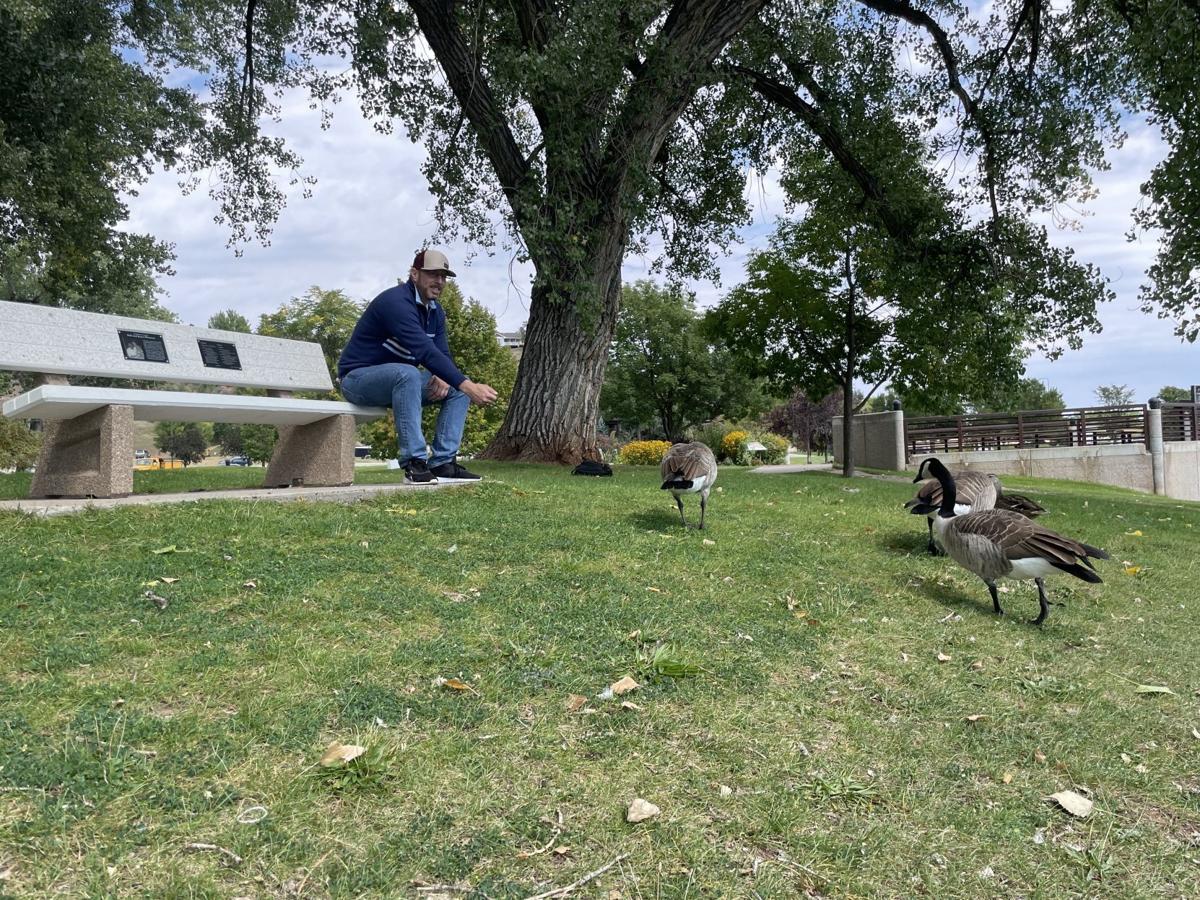 Chris Cudmore sits at his usual park bench spot to feed the waterfowl.

Christopher Cudmore no longer asks himself why he had to spend most of the last decade in prison, nor does he punish himself internally for developing a methamphetamine addiction while serving his sentence.

Gazing out over Canyon Lake, Cudmore's train of thought shows steadiness and he takes his time before explaining his perspective on it all.

"Everything serves a purpose," Cudmore said. "It was supposed to happen. A lot of people ask, 'Why?' We all have choices."

Cudmore will turn 39 at the end of the month, a birthday he expects to celebrate sober — something he hasn't done since his 30th trip around the sun.

In 2011, Cudmore was found guilty of grand theft, but his meth use began in the Mike Durfee Penitentiary in Sioux Falls.

"I didn't use any substance, other than marijuana and alcohol, until I was in prison," Cudmore said, joking that South Dakota Department of Corrections is called the "Department of Connections" among inmates.

"It's a sad place," Cudmore said of prison, his gaze once again lifting up towards the lake.

"People don't have a problem with drugs and alcohol. It's a poor attempt at finding a solution or relief for an inner struggle," Cudmore said.

After being paroled out a year early in June 2019, Cudmore continued his meth use and ran into more legal troubles in Meade County and Minnehaha County as a result.

He was charged with several counts stemming from the two incidents, including grand theft auto and possession of methamphetamine. Cudmore was then given the opportunity to receive treatment at the Pennington County Care Campus facility in March.

On Aug. 18, Cudmore completed the inpatient addiction treatment program and is currently is in the aftercare program. His sentencing hearings are scheduled for Sept. 22 and Oct. 4.

Throughout his journey of recovery, Cudmore said he's had a lot of moments of clarity that pepper the last several years.

"I was trying to find out where that miscommunication was with myself," Cudmore said. "When someone has decided they've dealt with enough pain and is willing to do what it takes to love themselves, that confidence, security, reassurance builds."

Cudmore said he was willing to take the time to love himself for who he was, then he put up strong boundaries between himself and people, places and things that he felt would bring negativity into his life.

"You have to be careful of what you allow in," Cudmore said. "There's a list of things that I had decided I was going to avoid at all costs. The main thing was negativity."

To be able to talk and spend time with others who struggle with addiction is something Cudmore considers a privilege because it's helped him to understand himself and see things through their eyes as well.

If there's any advice Cudmore can offer to those struggling with addiction or are in active recovery, focusing on self love is the first step.

"We all have a choice on how we are going to spend our time," Cudmore said. "Maintain that focus and establish some goals."

The fear that may come from feeling alone or anxious about what's to come is something Cudmore had a major struggle with until his friend asked him a simple question.

"What are you afraid of?"

Cudmore said he couldn't think of an answer.

Then his friend reassured him.

"She said whatever it is trying to get your attention isn't worth listening to," he said, which he reminds himself of often as a way to refocus his energy into being present and positive in life.

That's when his gaze bounces back up to the lake, a place where he often comes to sit in silence, to give himself a break, to allow himself to be himself.

"I sit in silence a lot to reflect," Cudmore said. The Canada Geese and ducks benefit from Cudmore's park visits as well. Cudmore's arrival at his usual park bench has become synonymous with McDonald's French fries to the birds.

Cudmore and the waterfowl get along well enough, but being exposed to other like-minded people who are in recovery themselves is invaluable.

"It's all about exposure," Cudmore said. "In AA (Alcoholic's Anonymous) or NA (Narcotics Anonymous) rooms, some of these oldtimers have anywhere from 30 to 40 to 50 years of recovery under their belts. Those old guys shouldn't be taken for granted and they're not going to be around forever. There's already a limited environment of recovery culture because our population is so small."

Rapid City is lucky to have many AA and NA meetings at different times throughout the week, Cudmore said. That's not the case for smaller communities.

Cudmore said those who are in active recovery can make a huge impact on those struggling with addiction by getting involved with their local meeting. That support can be expressed through mere encouragement of recovery.

"That's the sort of exposure people need to have," Cudmore said. "There are people that have overcome this."

Christopher Cudmore watches a Canada Goose as it scours the grass for bits of French fry at Canyon Lake Park in Rapid City on Tuesday.

Chris Cudmore sits at his usual park bench spot to feed the waterfowl.