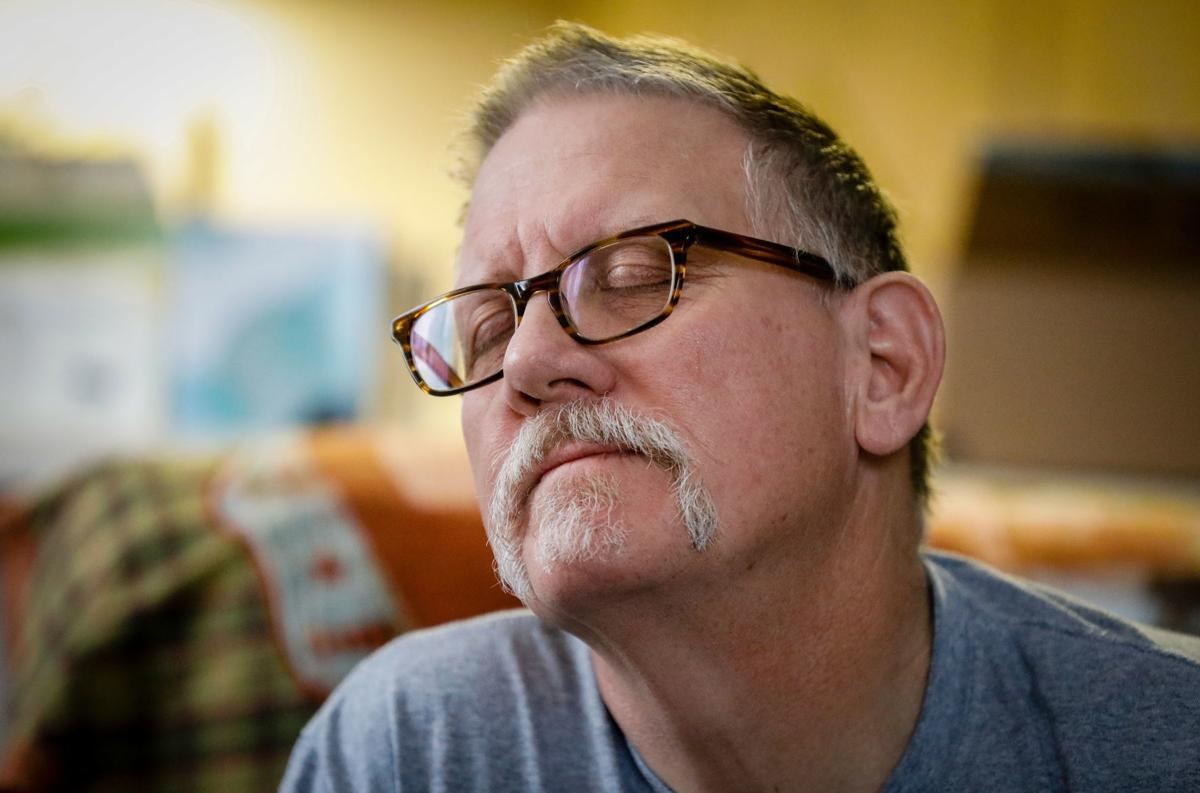 Wayne Alden closes his eyes while reflecting on his son Patrick Alden in his apartment in Rapid City. 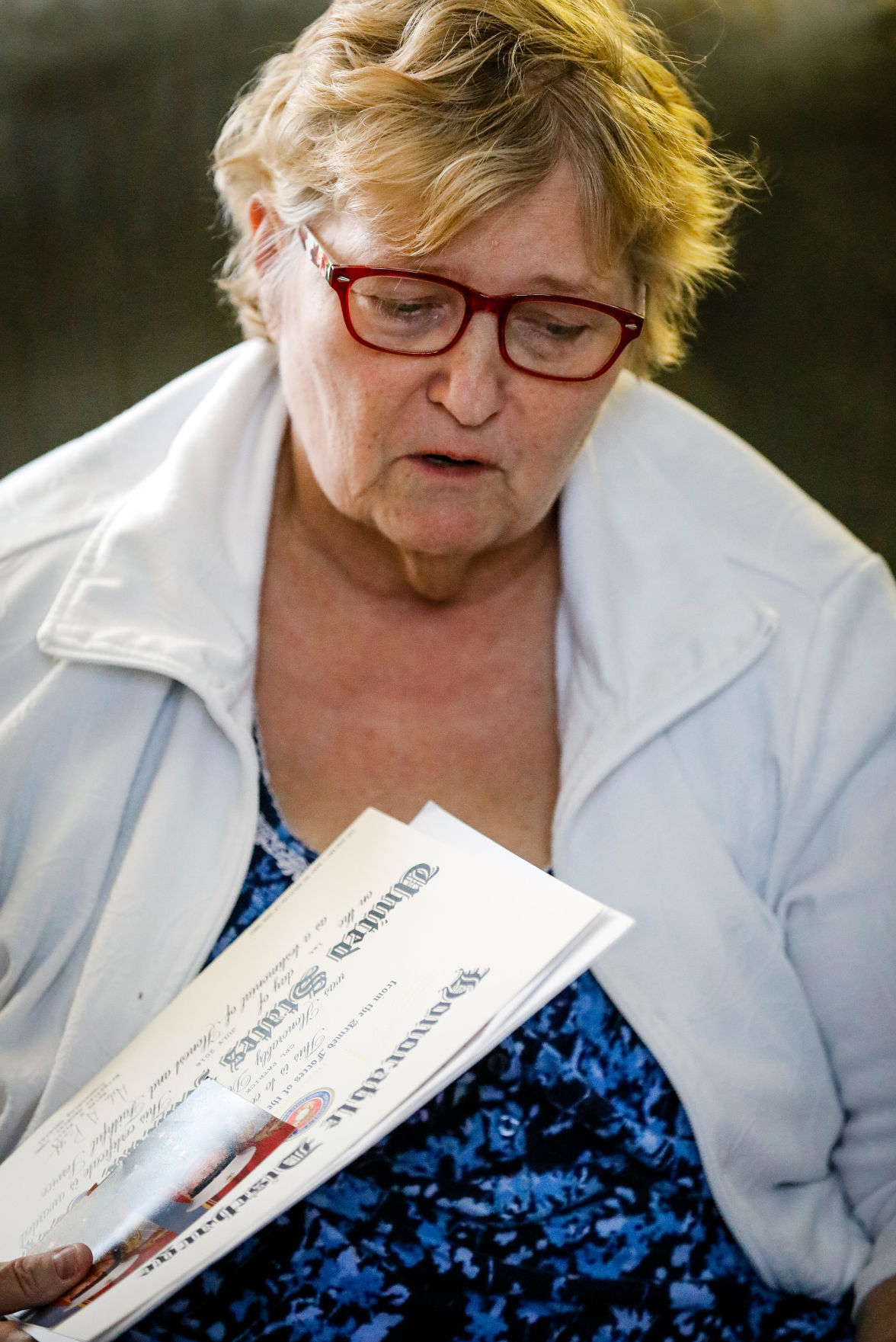 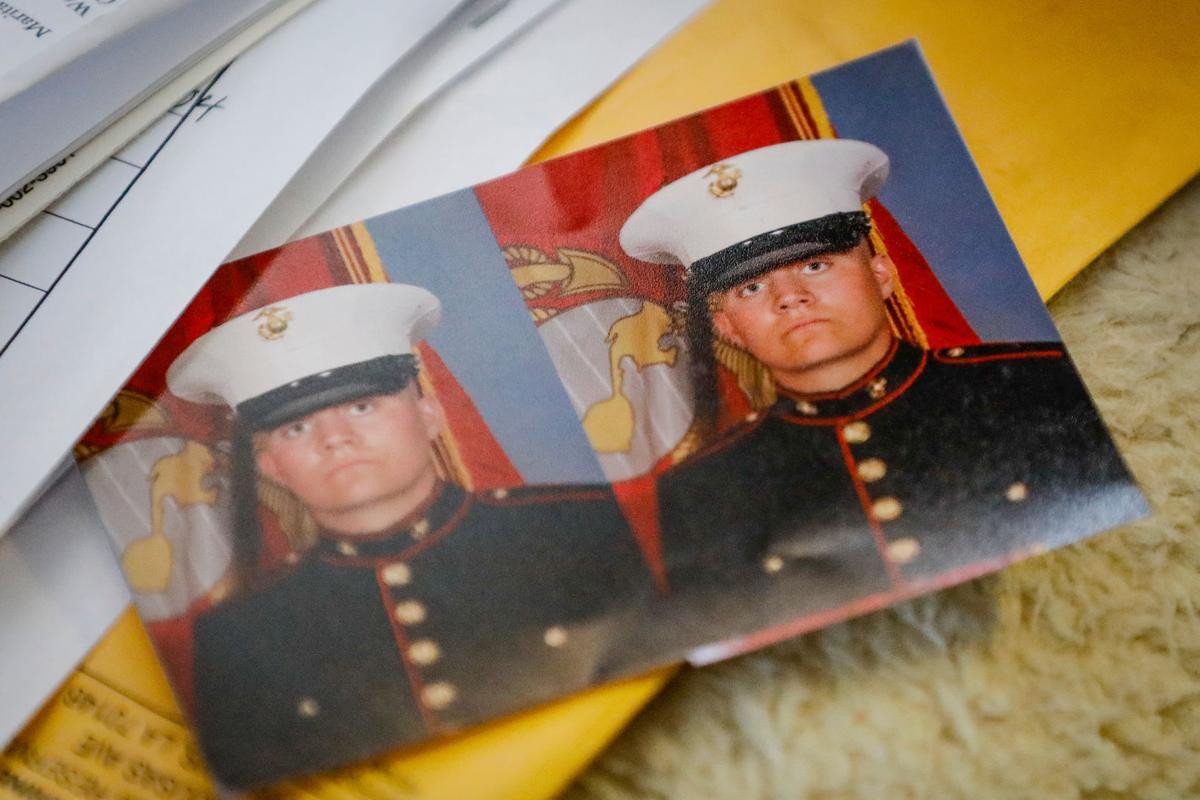 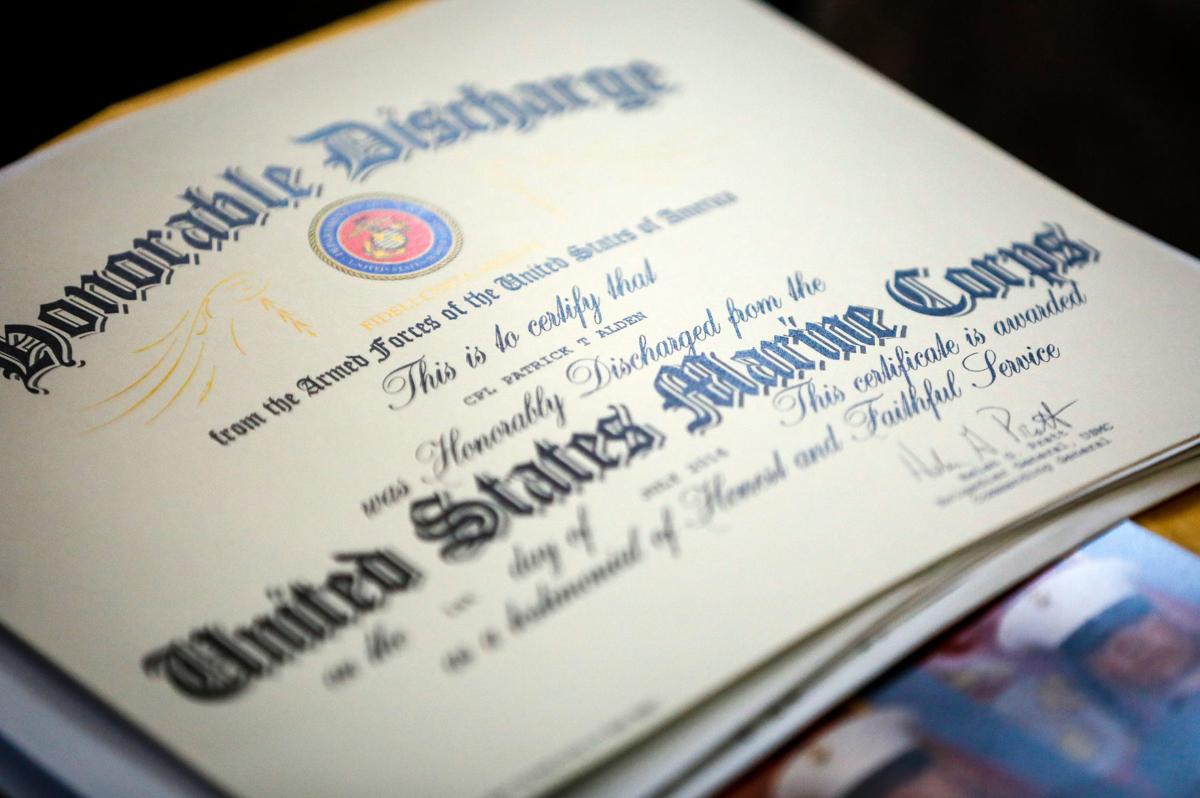 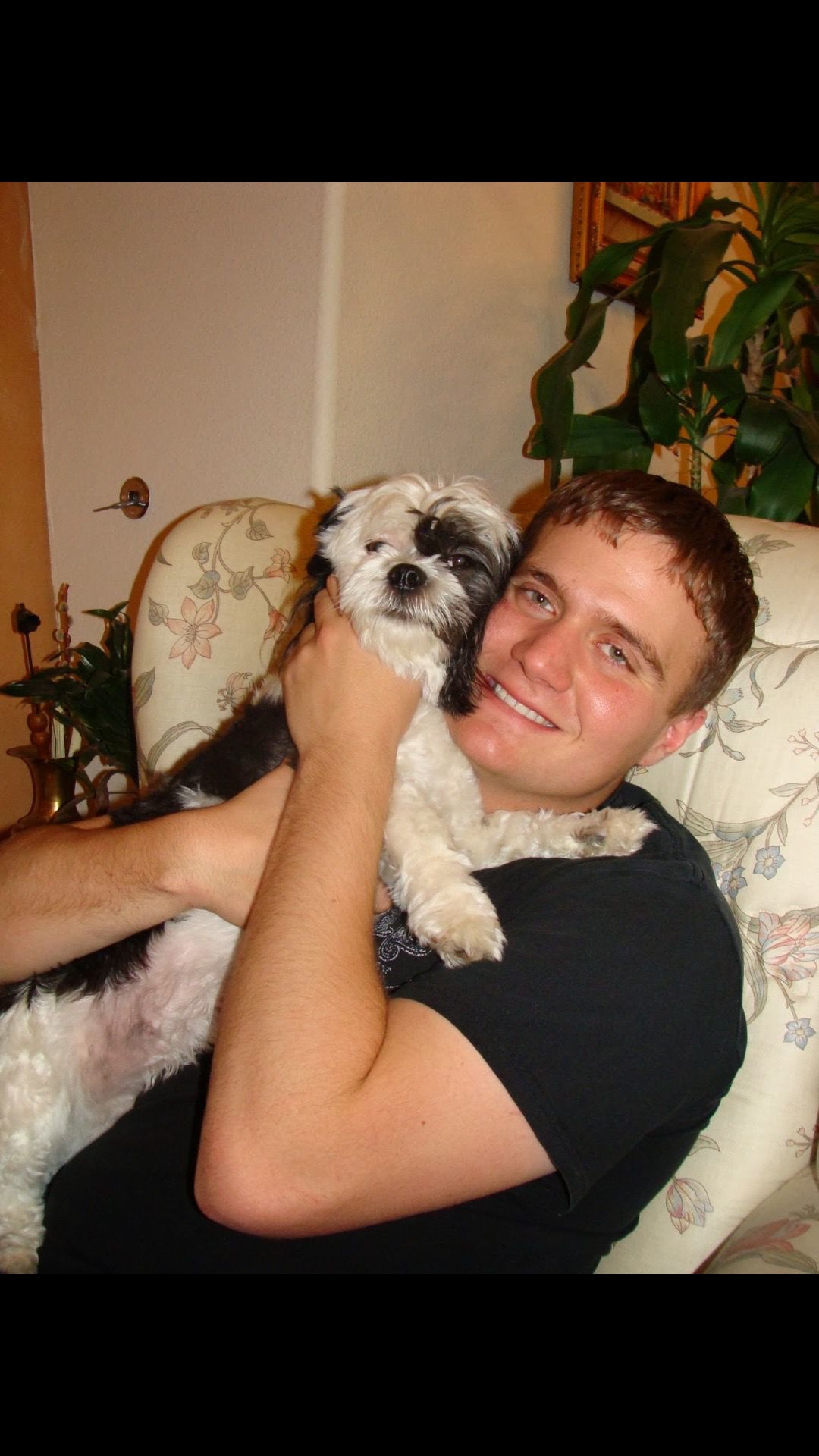 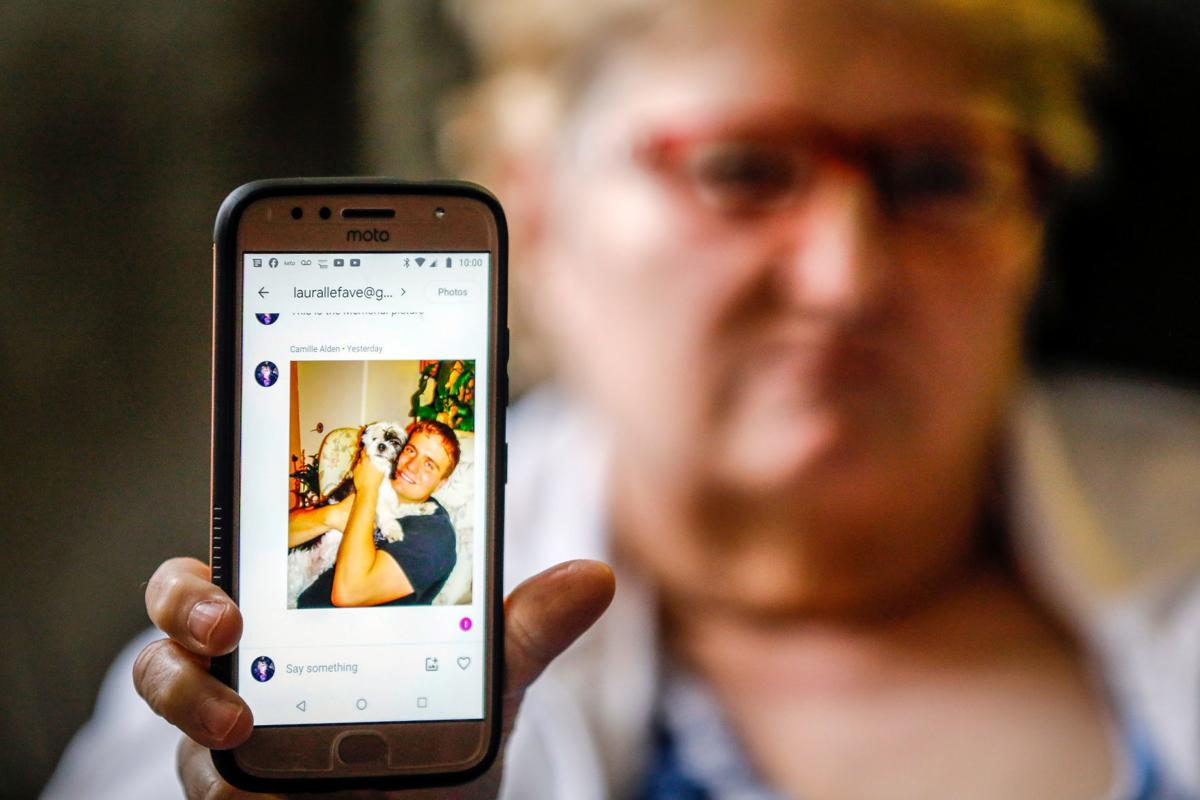 Camille Alden holds up her phone with a picture of her son Patrick Alden hugging a dog. 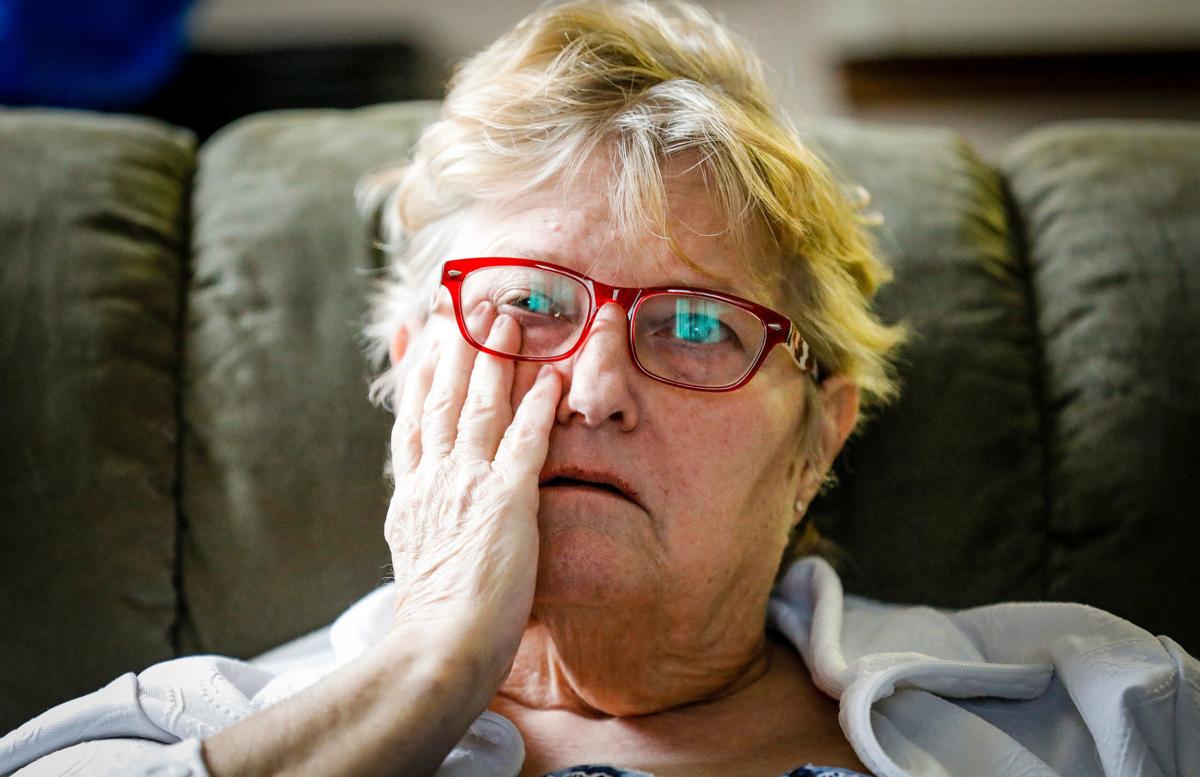 Camille Alden wipes her eyes while talking about her son Patrick Alden in her apartment on Friday in Rapid City. 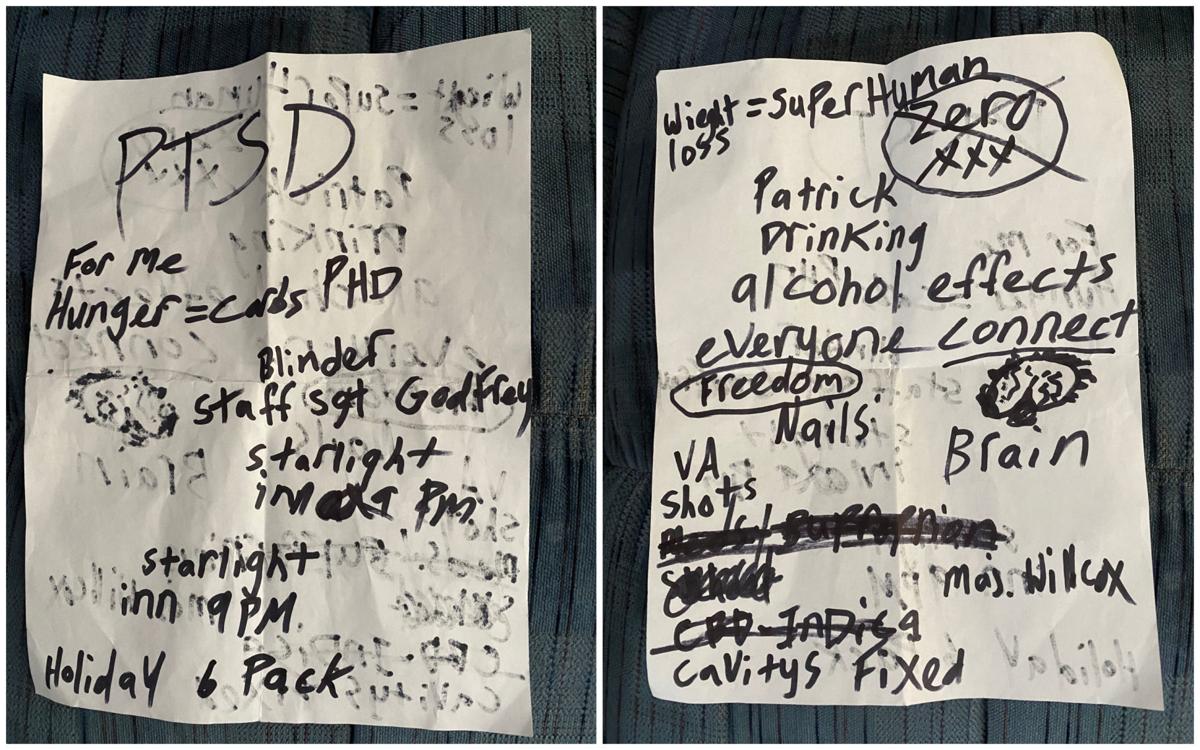 A piece of paper found in the gunman's apartment after last Sunday's shooting at a Rapid City apartment building.

The family of the gunman in the Rapid City apartment shooting last Sunday apologized to the victims and said while their loved one was a Marine Corps veteran struggling with a myriad of mental health issues, it doesn't excuse his actions.

"We're very sorry" for what he did, Camille Alden said Friday while sitting next to a stack of her son's military and health records.

"Help is out there. He didn't take it," Wayne Alden said of his son, Patrick.

The 29-year-old then went into the hallway where he fatally shot David Iron Horse, 64, according to a news release from the Rapid City Police Department. Patrick, who also shot toward officers and hit a police vehicle, was then fatally shot by an officer who came across him in a stairway, the release says.

Thomas Trout, 81, died from health issues that were exacerbated by the stress of the shooting and evacuation, according to the release and his wife.

Patrick's actions created a terrifying and chaotic situation, according to interviews with witnesses, statements from police and the bullet-ridden apartment.

Patrick lived with his 23-year-old brother, Nicholas, on the north end of the second floor of the apartment building, while Camille, Wayne and their 18-year-old son Matt live on the south end of the first floor.

"We heard a lot of commotion" coming from the second floor around 5 p.m. last Sunday, Wayne said. The fire alarm then went off so Wayne peeked into the hallway to see what was going on. He saw two police officers with handguns drawn standing at the base of the northern stairway.

Wayne went back inside and heard more noises that this time he knew was gunfire.

Camille and Wayne said Patrick wasn't allowed to own guns due to an involuntary mental health commitment, but he would go to the shooting range with Wayne and he built a 9 mm handgun out of two different guns. They said that's the gun he used last Sunday, not a rifle like police said.

Wayne said he wasn't worried about his son having a gun because he had no history of suicidal ideation or violence towards others. He also said that he didn't think his son — an adult and Marine Corps veteran — would have voluntarily given up the weapon.

The Aldens said they had no idea what was going on and had no reason to think their son was involved. Once the shooting was over, Camille said, an officer went door-to-door to make sure people were safe and she told him that she didn't know where Patrick was. A detective later came by to take the couple's witness statements.

Wayne and Camille said they suspected Patrick might be the shooter when Wayne asked if his son was safe, and the detective left the apartment, saying he would be right back. The detective returned with a second detective who asked the couple more questions. Their suspicions were confirmed at 9 or 10 p.m. when detectives returned to tell them Patrick was the gunman.

"The person I remember at 19, 20-years-old was an incredibly sweet young man," and I'm trying to understand how Patrick could have done this, Wayne said.

"How could you do this?" Camille remembered thinking.

Camille said she had just seen Patrick the Friday before the shooting and said he was acting like himself — withdrawn and depressed — but showed no signs of psychosis like he had in the past.

But after the shooting, she learned that Patrick had been acting odd that Sunday. Camille said Nicholas told her that Patrick dumped out his anti-depressant medications. He also said Patrick gave him a hug and told him he loved him before he left for work at noon, something he didn't usually do.

The family also found a piece of paper in Patrick's apartment that was scribbled front-to-back with seemingly random words and phrases including "PTSD," "alcohol effects," "brain," "cavities fixed," "freedom," "VA," and weight loss=superhuman." The sheet also included the names of a military major and sergeant, but the family said they weren't sure if these are real people Patrick worked with or characters he made up. When Patrick had psychosis, his family said, he heard voices and imagined scenarios related to the military.

The Aldens said they aren't angry at police and it was clear he planned to keep shooting.

Patrick "decided he was going to do this, whatever guts it took, and he just went into Marine combat mood," Wayne said.

"They were right in the line of fire and they stood their ground and they stopped him," he said of the officers who confronted Patrick in the northern stairway. "They were incredibly brave, heroic officers."

Wayne said the autopsy shows that the officer hit Patrick in the shoulder, ribs and arm before a fourth shot to the side of his head caused "instant death."

The Aldens said they understand if Trout and Iron Horse's relatives hate their son, and said they haven't spoken with the families because they don't want to make them more upset. But they said they are open to meeting them in the future.

They also said they hope the Iron Horse family sues Patrick's estate so they can collect his savings and the value of his vehicle.

Patrick, who had seven siblings, grew up in New Mexico and had no mental health or addiction issues before joining the military, his parents said. Wayne said his son stood up to bullies in high school, and Matt said his brother had a passion for video games, guns and dogs.

Patrick joined the Marine Crops Junior ROTC in high school before enlisting in the Marines in 2008 when he was 19, Camille said.

"He wanted to serve his country," she said.

Camille said Patrick served through 2012 and held up a certificate that shows he received an honorable discharge.

Patrick was stationed at Camp Pendleton in Southern California and in Okinawa, Japan, where he served as a diesel mechanic, Camille said. Matt remembers his brother sending him Japanese candy and toys.

Camille said part of Patrick's job involved cleaning out military vehicles used in the Middle East and he told her that the blood and flesh sometimes found inside the vehicles made him get Post Traumatic Stress Disorder, or PTSD. He was also twice hit in the head while he was enlisted, once while working on a vehicle and once after being attacked by someone in Los Angeles. The attack left him unconscious for five days, Camille said.

Once he left the Marines, Camille said, Patrick moved back to New Mexico where he studied nursing and hospital administration.

She said he initially did well at school, but his mental health "got worse and worse."

"He was escalating," Wayne said.

In 2017, Camille said, Patrick went to an urgent care where he asked a doctor to pull out all of his teeth because voices were coming from them. The doctor instead sent him to the VA in Albuquerque, where he did inpatient mental health treatment for about a week.

Then, in fall 2018, he had another psychotic episode where he drove to Camp Pendleton. He ended up before a civilian court, which ordered that he be involuntarily committed to the VA in Long Beach, where he received inpatient treatment for a few weeks.

Patrick returned to New Mexico where the VA prescribed him anti-psychotic mediation and had him see a psychiatrist, Camille said.

"He should have still been on it," Wayne said.

"He was very withdrawn, he very rarely went out," Camille said, and he was self-medicating with marijuana and alcohol, Wayne added. While Patrick showed signs of depression, he showed no signs of psychosis, was able to take care of himself, and paid his bills on time, Camille, Wayne and Matt agreed.

Camille said she urged her son to go to the local VA for his depression and he said he would but never followed through. But he did make an appointment with the Vocational Rehabilitation and Employment office for Jan. 3, five days after he died.

"I would like to use Patrick's life as an example of what our veterans have to experience and the lack of improper help they get," Matt said.

The Aldens said the VA can do more for veterans struggling with mental health. Camille said her son received letters reminding him to make appointments but that isn't enough to make sure people with serious illnesses show up. She said it would have been helpful if the VA could have sent someone to check in on him at home.

"Medical personnel may have recognized what was going on," she said.

Wayne Alden closes his eyes while reflecting on his son Patrick Alden in his apartment in Rapid City.

Camille Alden holds up her phone with a picture of her son Patrick Alden hugging a dog.

Camille Alden wipes her eyes while talking about her son Patrick Alden in her apartment on Friday in Rapid City.

A piece of paper found in the gunman's apartment after last Sunday's shooting at a Rapid City apartment building.