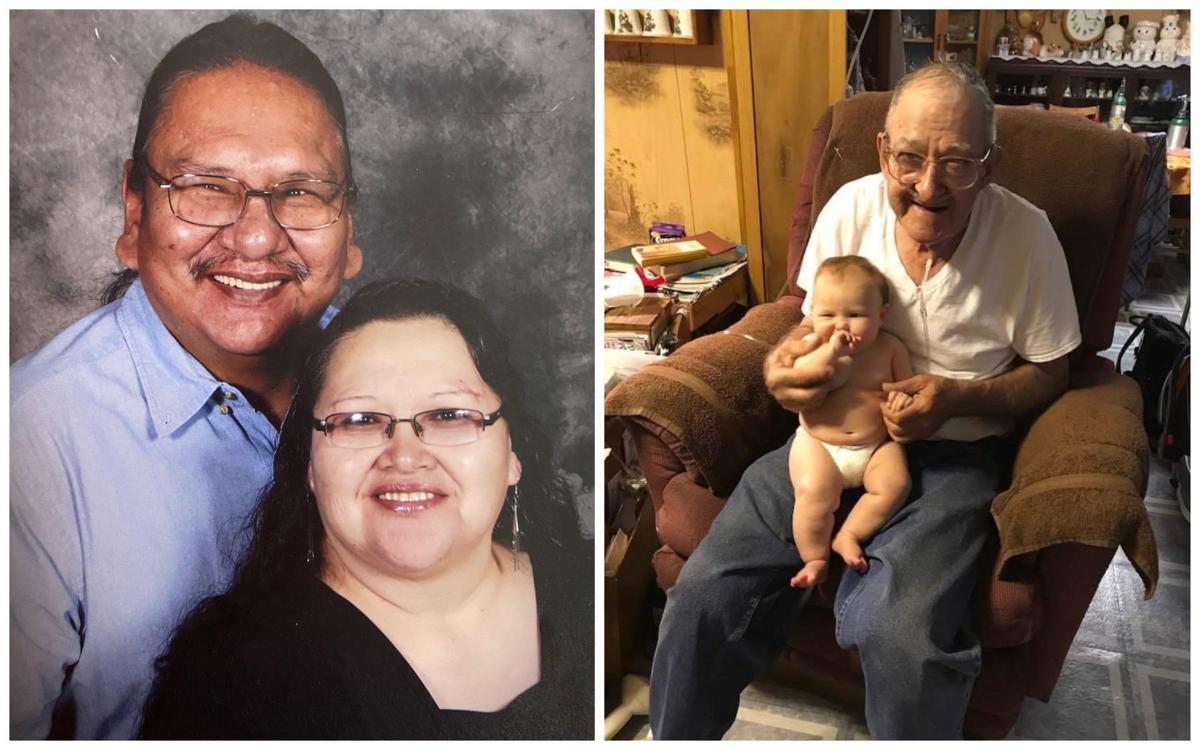 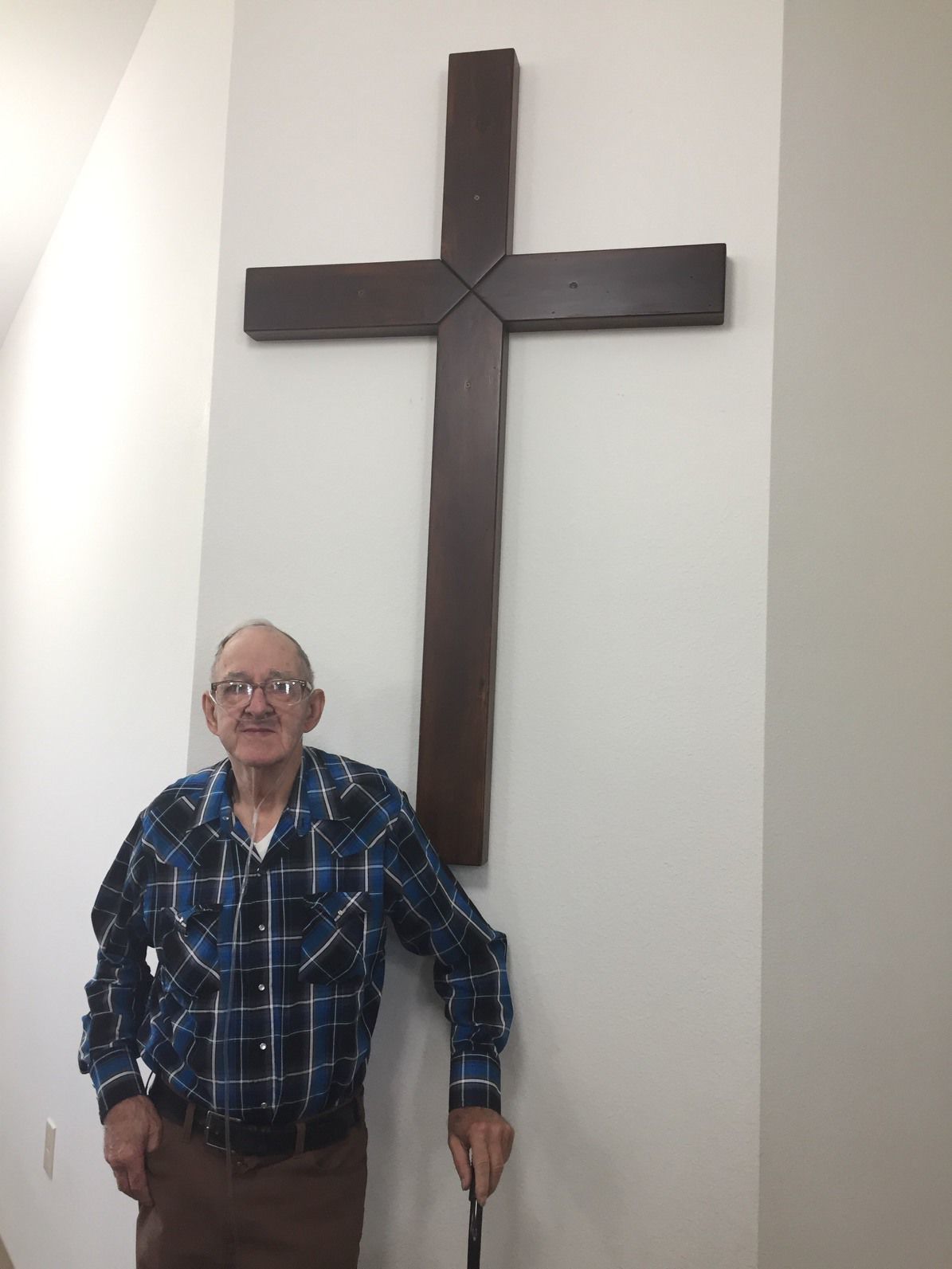 Thomas Trout smiles next to a cross. 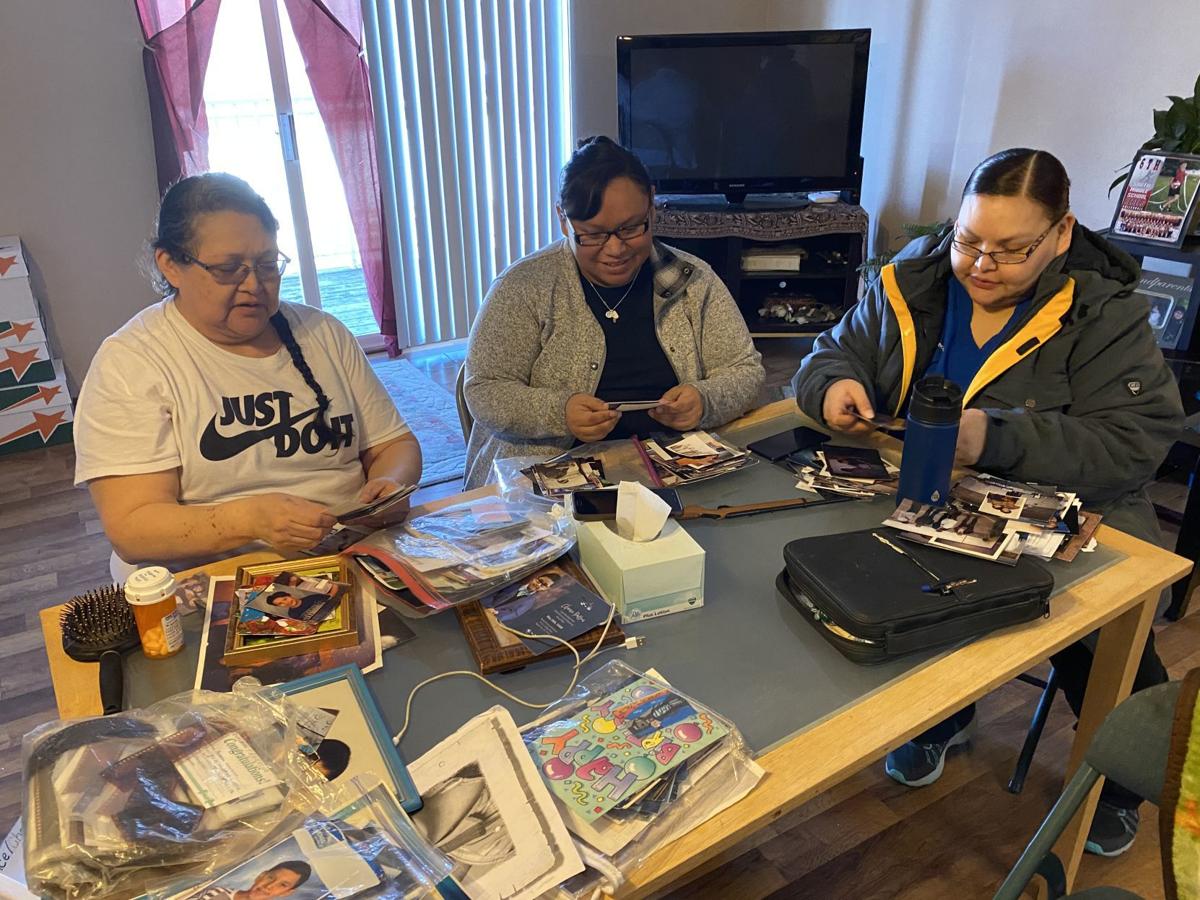 From left: Loveletta Iron Horse, her daughter-in-law Bobbi Gibbons and daughter Sonni Iron Horse sort through photos of Loveletta's husband David, who was shot to death. 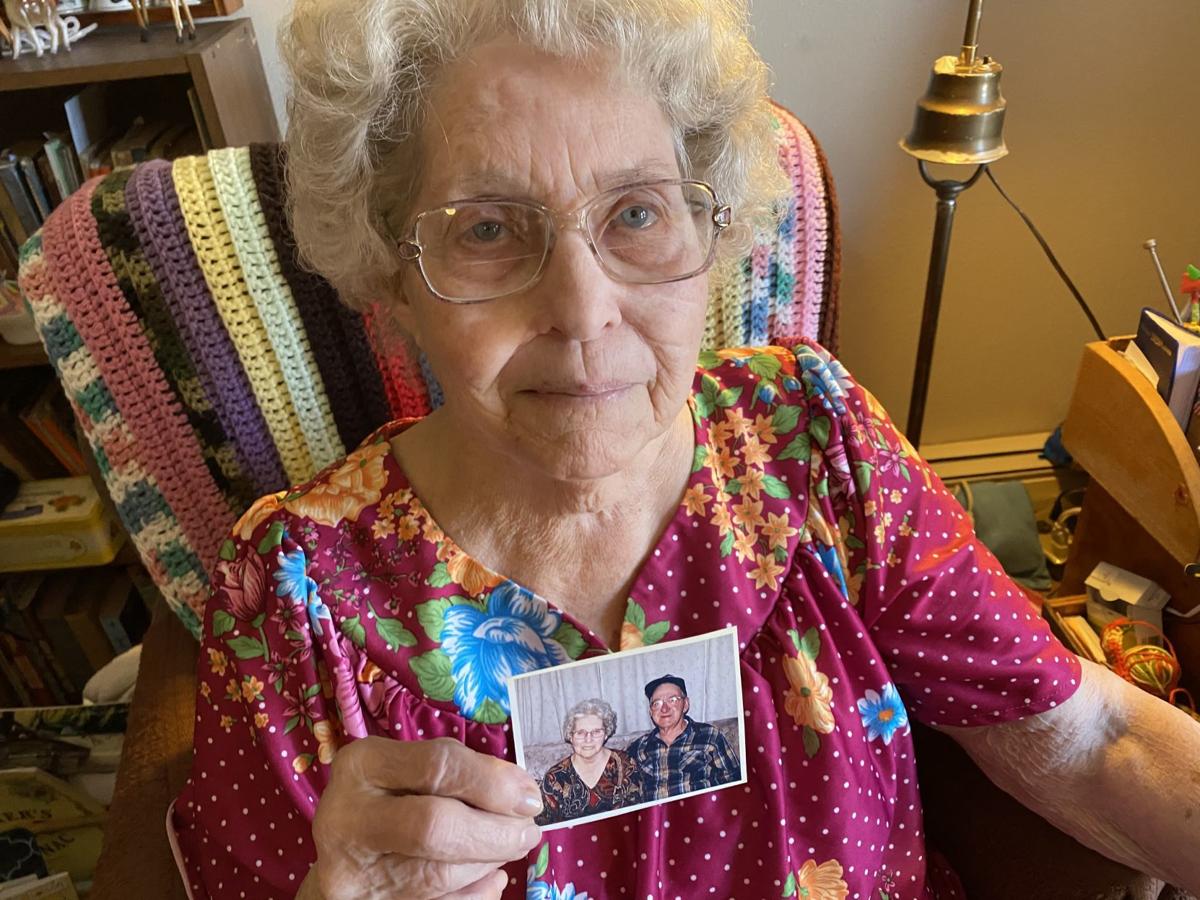 Clo Trout, 78, holds a photo of her and her late husband Thomas. 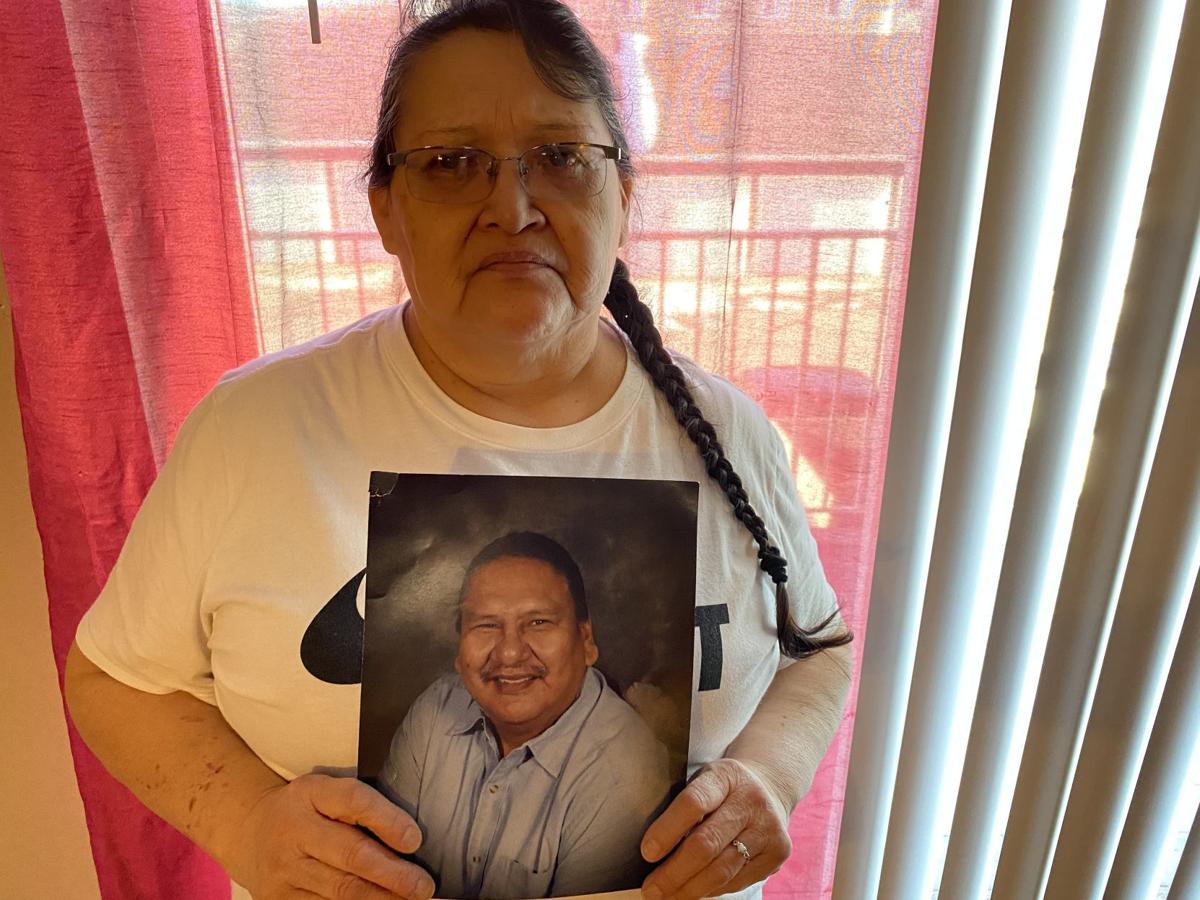 Loveletta Iron Horse, 62, holds a portrait of her husband David, who died after being shot outside his apartment multiple times on Sunday afternoon.

The man shot to death outside his Rapid City apartment Sunday afternoon and the man who died after evacuating were both faithful Christians who enjoyed singing gospel music and spending time with their large families.

"He was a man of God, he loved the lord, and he sang, he sang gospel music," Loveletta Iron Horse said about her husband David, who she found wounded right outside their front door.

"He just loved people and loved his grand-kids and his children and he loved the lord," Clo Trout said of her husband Thomas, who died as they sat next to each other seeking shelter in their pickup.

Interviews with Loveletta and other witnesses, statements from police and the bullet-ridden apartment paint a picture of a random, terrifying and chaotic shooting.

David, 64, died from multiple gunshot wounds on the second floor of 851 East Minnesota Street after he was shot by 29-year-old Patrick Alden, according to a news release from the Rapid City Police Department. Alden, who also shot toward officers and hit a police vehicle, was then fatally shot by an officer who came across him in a stairway with a rifle, the release says. Thomas, 81, died from health issues that were exacerbated by the stress of the shooting and evacuation, according to the release and Clo.

Loveletta, 62, spoke on the phone with a funeral director Tuesday morning as she and her relatives sat around a table in her living room, sorting through photos of her husband.

The apartment where Loveletta and David lived with four of their grandchildren is decorated with dozens of family photos, crosses, and artwork celebrating faith, love, home and family.

The couple, members of the Oglala Sioux Tribe, have been married for 38 years and met when Loveletta was serving fry bread at church. Loveletta, who usually didn't attend church, gave David some bread, they began chatting and he later asked her to return to church with him.

"I was hesitant but I liked him, I liked his long, thick hair, " Loveletta said with a laugh.

"He took me to church and changed my life around and helped me become sober," she said. He "helped me to love myself, forgive myself and help me raise my four older kids."

The couple raised eight children together between Rapid City and Scottsbluff Neb., and have 24 grandchildren and two great-grandchildren.

David worked as a park ranger at Mt. Rushmore National Memorial where he helped rescue lost hikers. But he had to retire due to epilepsy that caused grand mal seizures.

Loveletta described her husband as quiet, shy, funny and brilliant. He taught his children the importance of education but when they would ask for a ride to school, he would tease them about how he had to walk through winter storms to reach school when he was growing up. He excelled at math and the family would always ask him what big words meant since he was a "walking dictionary."

David sang gospel music at church and at home, liked to play basketball and volleyball, and loved watching Football, especially when the Rams and Broncos were playing. He was shot while he was watching a football game and waiting for his extended family to come over, Loveletta said.

The couple enjoyed going out to movies, working on star quilts, attending pow wows and spending time with their family. They were also part of a network that would visit hospitals to pray over sick people.

"He was always happy, he had the biggest smile that could light up the whole room, his chubby cheeks just squeezing his eyes together, said Jessica Patton, David's 15-year-old granddaughter. "He was like the strength to my grandma. He was like the other piece to the puzzle."

Jessica said her grandfather always stayed strong when he had his seizures, so she knows he would have been fighting for his life after he was shot.

Thomas, who grew up in West Virginia, was visiting family in Rapid City in 1956 when he met Clo at church and later went out to dinner with her family. They spent the summer together before he had to go back home. But they corresponded through letters — "we didn't have texting" then, Clo said — for four years until Thomas returned to Rapid City so they could marry. This February would be their 60th wedding anniversary.

Thomas worked in in construction and the couple had four children, seven grandchildren and one great-granddaughter. He was active at their church, where he served as a substitute preacher.

"Music was his life," Clo said about her husband.

Thomas didn't have any formal training but he loved to listen to country western music and sing southern gospel music at home and at church almost every Sunday.

David Van Cleave, who was visiting his grandmother Tuesday morning, said his grandparents and their children would sing hymns for the family on Christmas. But the tradition didn't happen this year since Thomas was in the hospital with pneumonia.

The 24-year-old said his grandfather loved woodworking and building things like furniture and toys. He also loved hunting and fishing — a fact illustrated by mounted antlers decorating the apartment — and would continue to take his grandchildren with him even when it became more difficult to move around.

Van Cleave, who works as a firefighter, was on duty the night of the shooting. He began paying close attention to the radio chatter when a fire alarm went off in Rapid City. He then heard that it was a false alarm and it was actually an active shooter situation that medical units were responding to.

"I didn't think a whole lot of it until I got called by my father and told 'grandpa's gone, he's gone,'" Van Cleave recalled. That's when "I realized I was listening to the radio chatter from the apartment and heard them talking about my grandfather."

"I'm going to miss him," Van Cleave said as he started to cry.

Editor's note: The Iron Horse family is raising money for David's funeral. Donations can be made at www.bit.ly/2QzZY28.

Rapid City man speaks out against meth after twin's death

Thomas Trout smiles next to a cross.

From left: Loveletta Iron Horse, her daughter-in-law Bobbi Gibbons and daughter Sonni Iron Horse sort through photos of Loveletta's husband David, who was shot to death.

Clo Trout, 78, holds a photo of her and her late husband Thomas.

Loveletta Iron Horse, 62, holds a portrait of her husband David, who died after being shot outside his apartment multiple times on Sunday afternoon.