A judge will decide whether a man convicted of a 1983 Rapid City double murder should get a new trial due to new DNA evidence.

George Luna, 71, is serving two life sentences after a Pennington County jury found him guilty of the first-degree murders of his wife and mother-in-law.

Lynn Luna — a 26-year-old in the process of divorcing her husband — and her mother, Helen Thomas, 65, were beaten to death at their home on Fairview Street, according to Journal archives. Both were found in pools of blood.

Luna, who maintains his innocence, has filed several appeals and habeas corpus applications since his conviction, to no avail.

“The court does not review frivolous and timely requests for relief,” retired Judge Jeff Davis wrote to Luna in a 2010 letter.

In 2018, Presiding Judge Craig Pfeifle allowed Luna to file a new habeas corpus application after the Minnesota Innocence Project tested DNA evidence that wasn’t available at the time of the trial.

The DNA testing looked at mitochondrial DNA (MtDNA), which can trace a person’s maternal ancestry but can’t match a sample to a specific person like nuclear DNA does.

The MtDNA samples came from hairs found in Lynn's hand, according to a lab report. They were compared to the MtDNA of George Luna and two other people he believes are suspects in the case.

The testing proved the hairs do not belong to Luna and another suspect, but could belong to the second suspect, the report says.

While Luna passed a significant hurdle by being granted a civil habeas trial, he still faces a high burden in arguing he deserves a new criminal trial in front of Judge Matt Brown.

Brown will “have to gauge the impact the newly discovered evidence” would have had if the jury had known about it at the time of the original trial, Murphy said. The question “is whether the newly discovered evidence — if proven and viewed in light of other evidence — established by clear and convincing evidence that no reasonable juror would have found the petitioner guilty."

In other words, in order for Luna to gain a new trial, the judge must find that the original jurors wouldn’t have convicted him if they had known and believed that DNA testing proved that the hairs in Lynn's hand didn't belong to him.

He “will not be able to meet his burden of proving DNA evidence exists exonerating him of his crimes,” prosecutor Tracey Dollison Decker wrote in a court document.

“What you can expect to hear (in court) is at least one expert witness, probably more, discussing what mitochondrial DNA is and its strengths and weaknesses as it relates to this case” she told the Journal

If Brown rules in favor of Luna, his conviction will be vacated, but he will remain in prison under the initial indictment. Prosecutors will then determine if they want to drop the case or re-try him.

The state Legislature passed a 2009 law saying that any imprisoned person convicted of a felony offense can apply for post-conviction DNA testing if they've exhausted all appeals, according to the National Innocence Project.

Lynn and Helen were murdered early in the morning of May 1, 1983. There were no witnesses and the murder weapon was never found, according to Journal archives.

“Luna and Lynn were engaged in a rather heated divorce proceeding and Luna had expressed considerable animosity toward Helen, his mother-in-law,” according to a 1985 South Dakota Supreme Court decision.

However, Luna refers to his “beloved wife” in a 2018 court document and has always maintained his innocence.

Luna, who was 34 at the time, was arrested in September 1983 before being convicted by a jury the next year.

The prosecutor called witnesses who said that glass particles from a broken window at the victims' home could be linked to particles found on clothing inside George’s van, according to Journal archives. He also pointed to Lynn's diary and testimony from people who knew her and George that said he abused his wife and threatened to kill her.

Luna's defense lawyer called witnesses who said the glass particles didn't match. He also said that there was no blood on his clothing. Luna testified for 12 hours, admitting that he threatened to kill his wife but didn't kill her.

An FBI agent testified that hairs found in Lynn's hand didn't belong to her husband.

The judge barred Luna’s defense lawyers from introducing evidence of other suspects, according to a 1985 Supreme Court decision.

Those suspects — Joe Leonard and Doug Thomas — are the ones who recently had their DNA tested against the hairs found in Lynn’s hands. Dollison Decker said she believes their DNA samples were collected at the time of the crime. The 2016 test results excluded Luna and Leonard but not Thomas as the contributors to the hairs.

Leonard walked into a convenience store near the victims’ home the morning of the murder with blood on his hands and shirt cuff, the Supreme Court decision says. A friend said he owned a steel pipe and that he confessed that he had been hired for the murders.

Thomas, Lynn's brother and Helen's son, had threatened his mother in the fall of 1981 and fired a gun into the ceiling, the decision said. Thomas quickly arrived at the crime scene after not seeing his relatives for a year. He was also the beneficiary of his mother’s life insurance policy.

Luna wanted to argue that the other two were the killers, or that they worked together. The Supreme Court said the evidence against them was weak because it lacked credibility and motive, and because Doug had an alibi. The court ruled the trial judge was right to bar evidence about them.

The Innocence Project doesn't comment on people they’ve never represented, including why they didn’t take up the case, said executive director Sara Jones.

Jones said the nonprofit reviews hundreds of cases each year and staff agree to investigate about half of them. The Innocence Project then only selects a handful to take to court.

Murphy and Dollison Decker will make their arguments before Judge Brown when Luna begins his three-day habeas trial on March 1, court records show.

In the meantime, he will remain incarcerated at the South Dakota State Penitentiary in Sioux Falls. 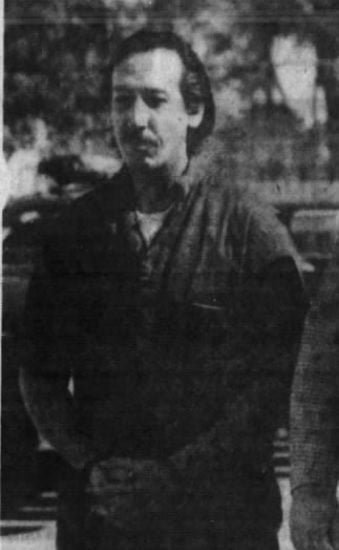 George Luna is escorted to court in this 1983 photo. 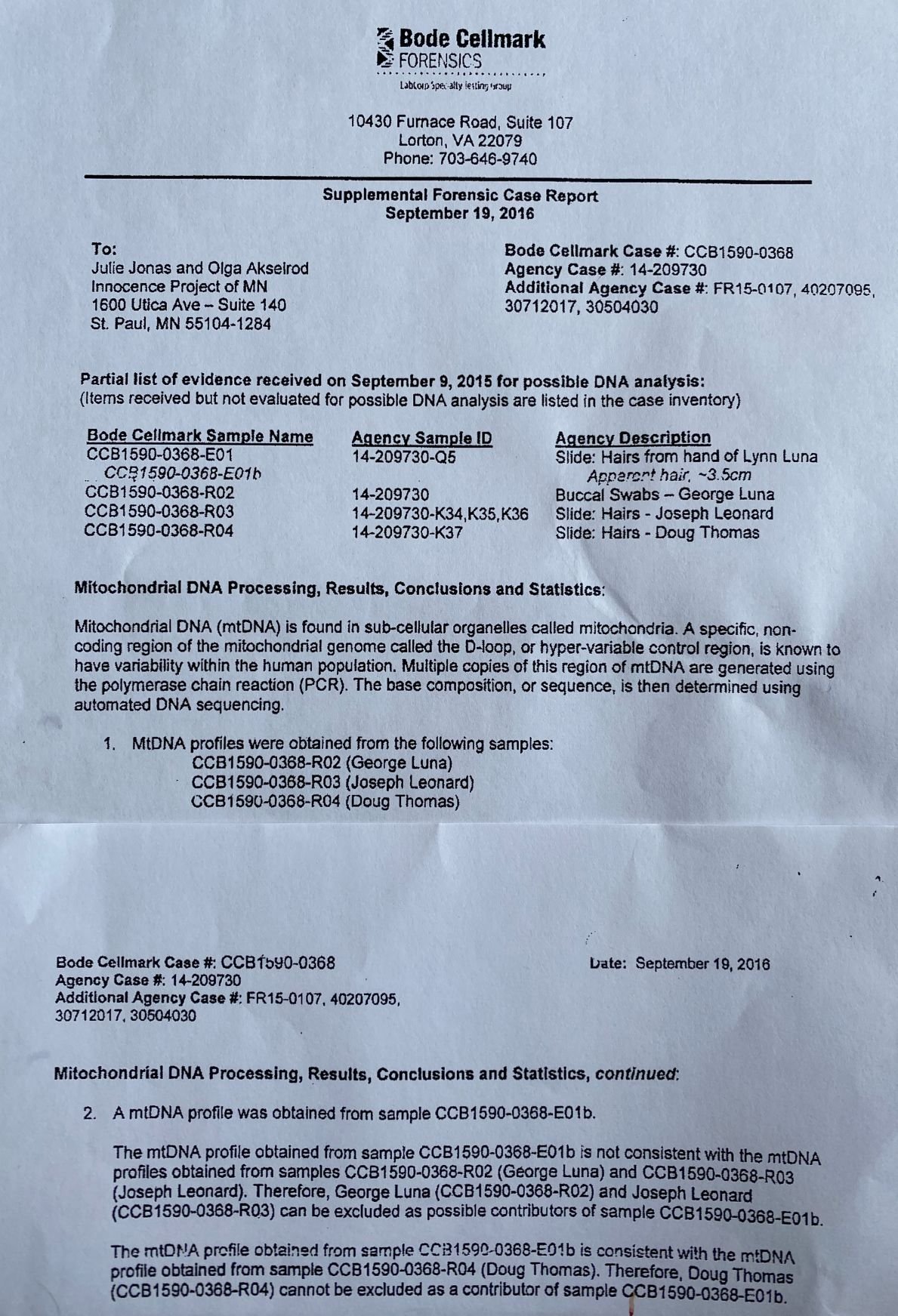 The results of the mitochondrial DNA testing. 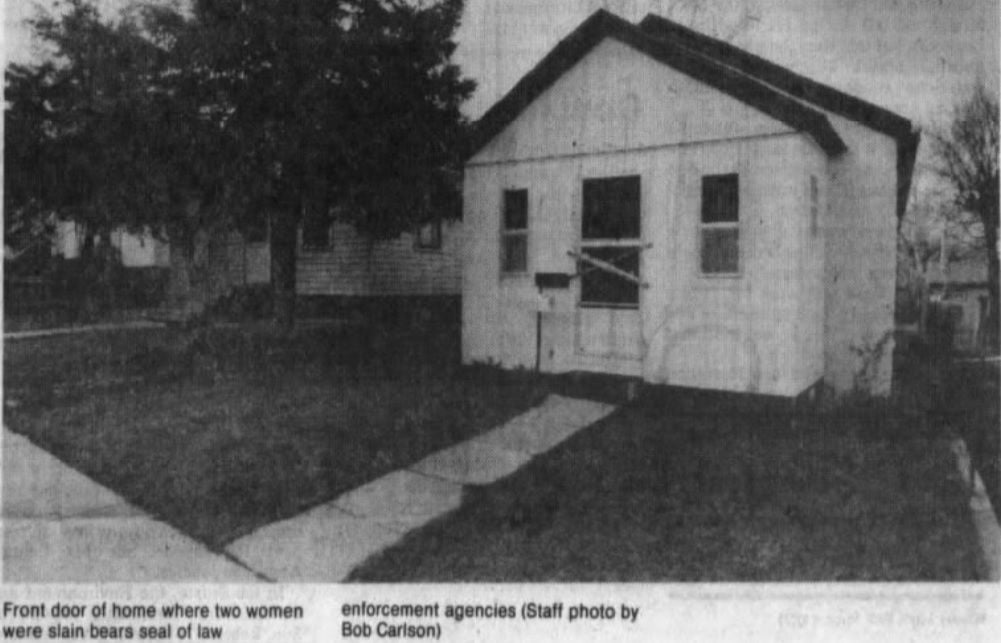 Police tape on the front door of the victims' home. 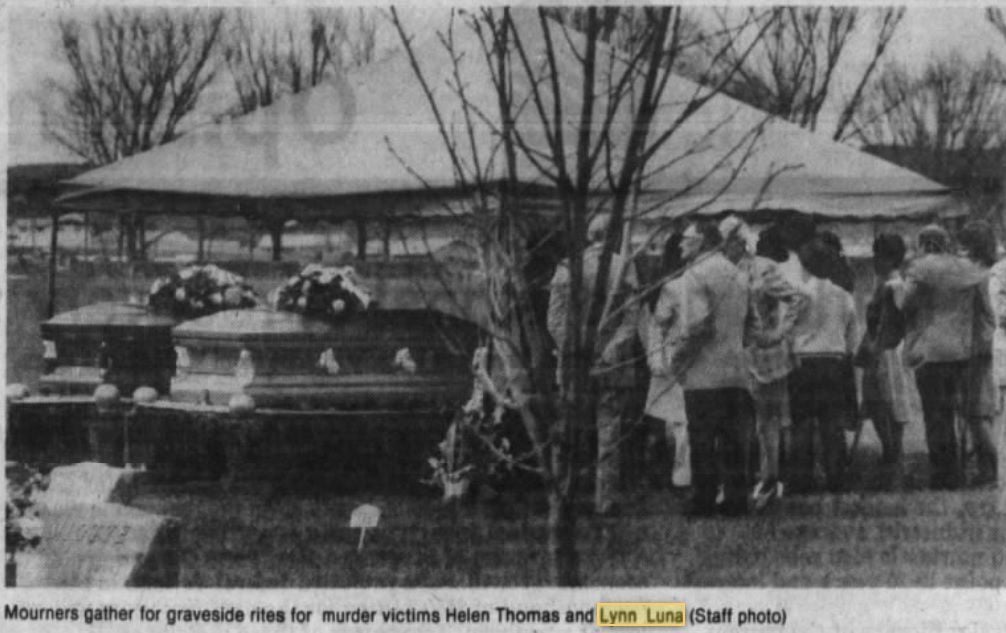 The funeral for Lynn Luna and her mother Helen Thomas. The Journal does not appear to have published any photos of the victims.