The presiding judge of the 7th Judicial Circuit has written a proposed order saying judges won't appear in Custer County court and trials will take place in Rapid City after the Custer County Commission passed an ordinance allowing guns inside the courthouse.

"Due to the action by the Custer County Commission in adopting ordinance 2020-18, which allows for firearms to be carried in the courthouse, the Custer County Courthouse is currently unsuitable and insufficient due to safety concerns," Judge Craig Pfeifle wrote in his proposed order.

The commission adopted the ordinance after meeting with Pfeifle and Judge Matt Brown who expressed their opposition and warnings from the Custer County state's attorney that allowing guns in the courthouse is a safety risk, legal liability and financial burden.

The proposed order says Custer County hearings will be overseen by a judge appearing remotely through audio or video feeds or take place at the Pennington County Courthouse in Rapid City. All trials will be comprised of Custer County jurors but take place in Rapid City. It's unclear if lawyers and the public — not just judges — can take advantage of the video and audio feeds if they are concerned for their safety. 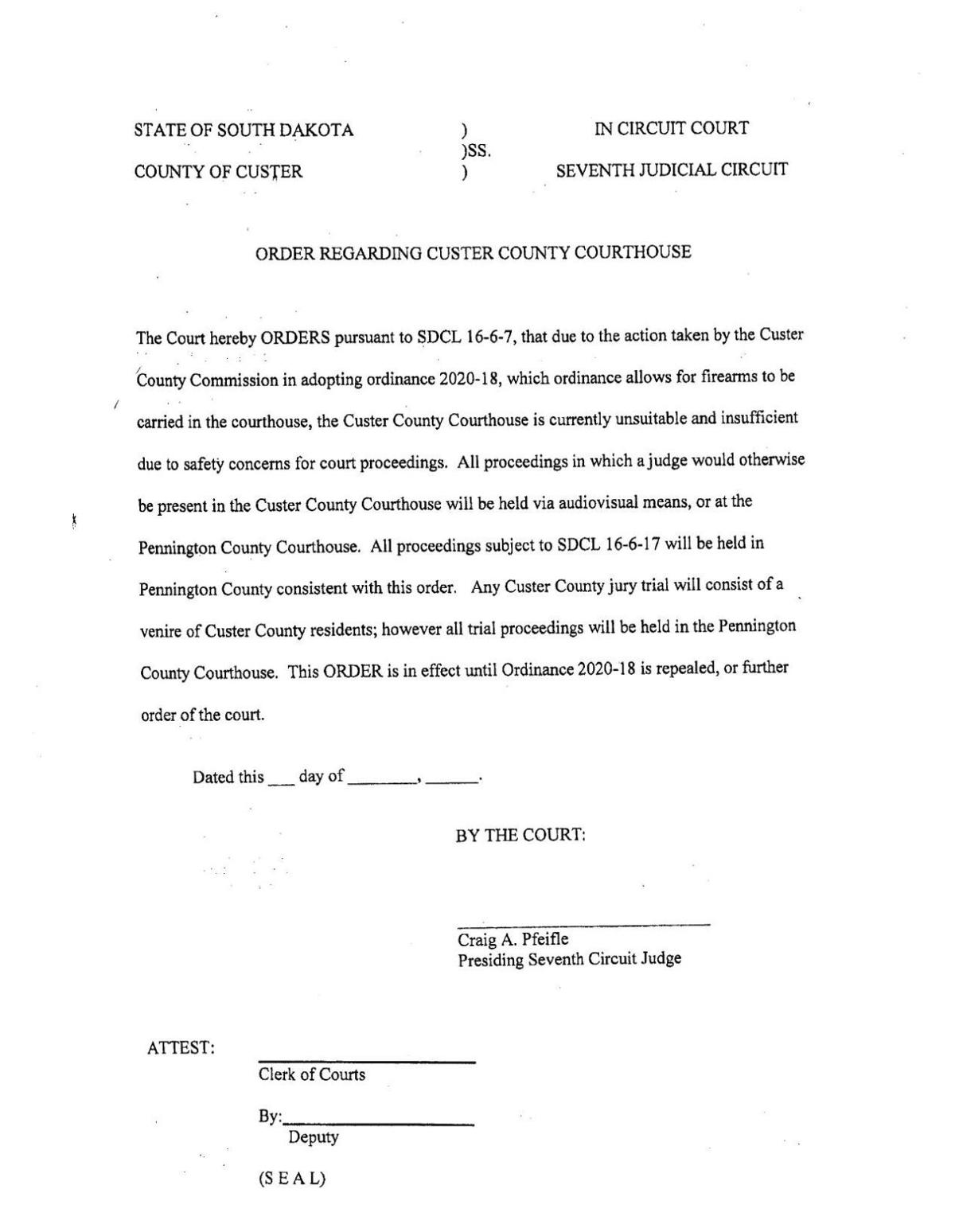 Pfeifle said he's sent the proposed order to the South Dakota Supreme Court, which will review it for approval or rejection in January.

In the meantime, judges will appear via a video or audio feed, said Tracy Kelley, state's attorney for Custer County. She said judges had been appearing in person at the Custer County Courthouse during the pandemic so the courthouse is now working on setting up the technology. She said any hearing that involves testimony or physical evidence will have to take place at the Pennington County Courthouse since it's difficult to handle those remotely.

Custer County won't have to worry about jury trials for now since they are already on hold across the 7th Circuit — which includes Custer, Pennington, Fall River and Oglala Lakota counties — due to COVID-19, according to a Nov. 13 order signed by Pfeifle. The order, which was quickly approved by the chief justice of the South Dakota Supreme Court, lasts through Dec. 31.

The commission voted 3-1 on a resolution that allows people to bring firearms into the courthouse but not into the courtroom and other offices, according to Nov. 5 meeting minutes.

"It is in the best interest of Custer County" to allow guns in the courthouse, the text says.

The ordinance cites state law 22-14-28, which says county commissions can override a different law that says people can be punished by up to one year in jail for bringing firearms into courthouses. 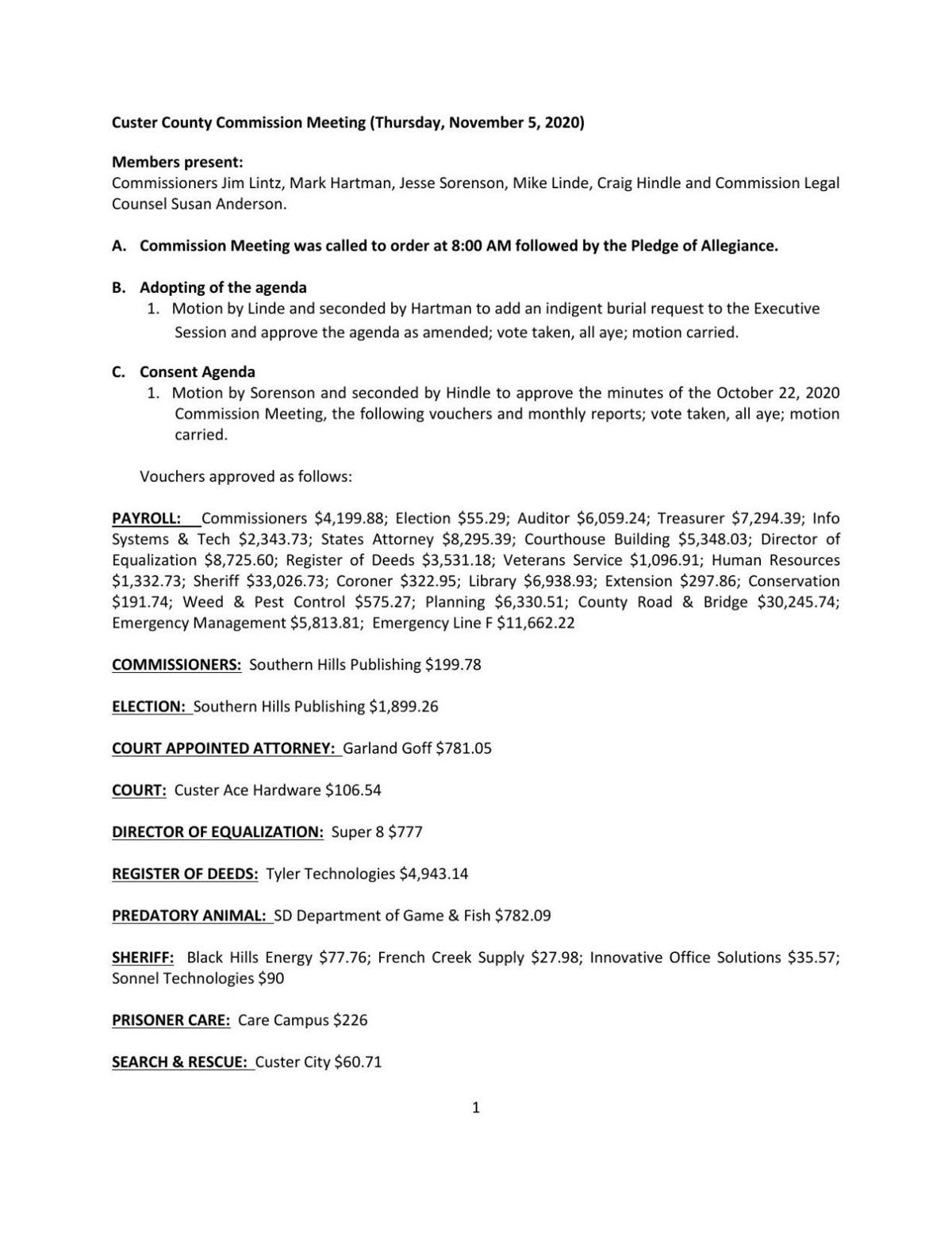 Judges Pfeifle and Brown attended and discussed the ordinance at the Nov. 18 commission meeting where commissioners unanimously agreed to hold a special meeting about the topic on Nov. 30, minutes show.

We "set forth the concerns on behalf of all the judges, our staff and the litigants we serve," Pfeifle told the Journal.

The judges discussed safety and liability concerns, while Pfeifle said he has the option to refuse to hold court in the county, according to a  Dec. 3 story in the Custer County Chronicle.

The Nov. 30 agenda and minutes are not posted to the county website, but the Dec. 3 story says public comment was in support of the ordinance and commissioners took no action, which means the ordinance went into effect on Dec. 2.

Citizens argued during public comment that “the only thing that stops a bad guy with a gun is a good guy with a gun" and that this move would counter attacks on gun rights, the Chronicle reported. One man said the cost of freedom is more important than costs associated with the ordinance.

Mark Hartman, the commissioner who introduced the ordinance, declined to speak with the Journal.

He's argued in meetings, however, that he's afraid the courthouse would be a target for bad actors without the ordinance, according to a Nov. 12 story by the Chronicle. Hartman said he's never seen any document, fact or study that shows the resolution is a bad idea or dangerous, the Dec. 3 story says.

Chairman Jim Lintz said he discussed the ordinance during recent meetings but did not vote since he only does so when there's a tie.

Lintz said he supports gun rights and has no problem with the part of the ordinance that allows county employees to carry firearms within the courthouse.

He said letting all civilians carry firearms will result in disagreements with judges and a "considerable cost to the county."

Lintz said commissioners who support the ordinance believe “it’s safer when the general public can protect themselves than just the one rogue individual."

He said commissioners argued that judges concerned about safety can enter the building through the back and never have to step foot in the court hallways and that armed people can intervene if a gunman targets a victim on their way to a hearing.

The commission is concerned about the cost of having a deputy and the metal detector at the front of the building each day, Lintz said about whether that would be a solution to stopping a bad actor from entering the building in the first place.

Lintz said the ordinance is being discussed again at the Dec. 9 meeting and commissioners will discuss the option of having a deputy and metal detector at the front of the building only when court is in session.

"I think there's compromise to be reached," he said.

Kelley said she supports the Second Amendment but does not believe civilians should carry guns inside courthouses.

"In a courthouse obviously you have situations where people can become emotionally triggered” whether it's about a criminal case or a financial issue, she said.

"If you're truly talking about the safety of the public and employees in the building that would make more sense” to move security to the front of the building, Kelley said. Adding "firearms does not accomplish that goal."

Kelley said there are also liability and financial concerns.

She said the county's insurance company said it will not cover legal costs if a county employee is sued or criminally charged for purposely or accidentally firing their weapon in the courthouse. Kelley said there's few situations where the company would cover the costs for a non-employee.

Those legal costs "would be funded by taxpayer dollars," Kelley said.

"Logistically, it’s just going to be a lot more difficult" to arrange audio or visual meetings or travel to Pennington County, she said. "It's going to increase the expense to Custer County, there's no doubt about that."

Kelley said there are sometimes as many as 140 people called for jury selection and the county will have to cover their gas mileage for the approximately 80-mile round trip between Custer and Rapid City. She told the commission that some defendants already struggle to make it to the Custer County Courthouse and will now have to secure transportation to Rapid City, according to the Chronicle.

Gov. Kristi Noem and the Department of Corrections have not changed their minds since asked in March about special prisoner releases as a way …