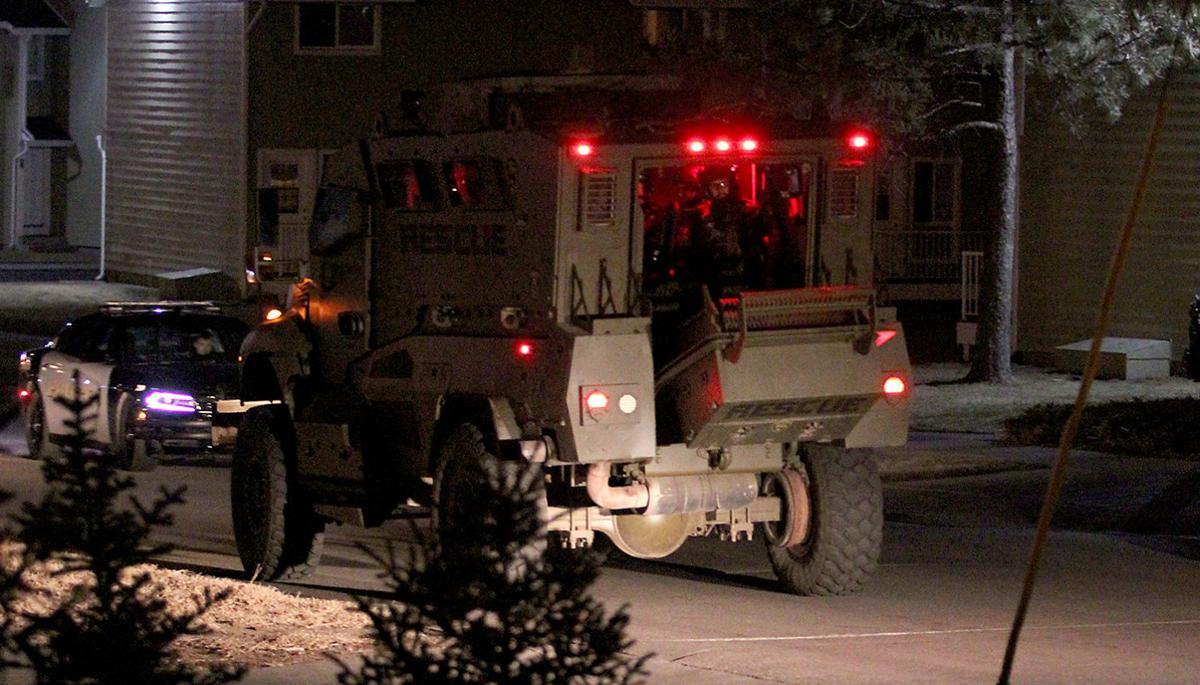 Law enforcement officers with armor and weapons sit in the back of an armored military-style vehicle while responding Tuesday night to minor suspects accused of shooting at other minors. 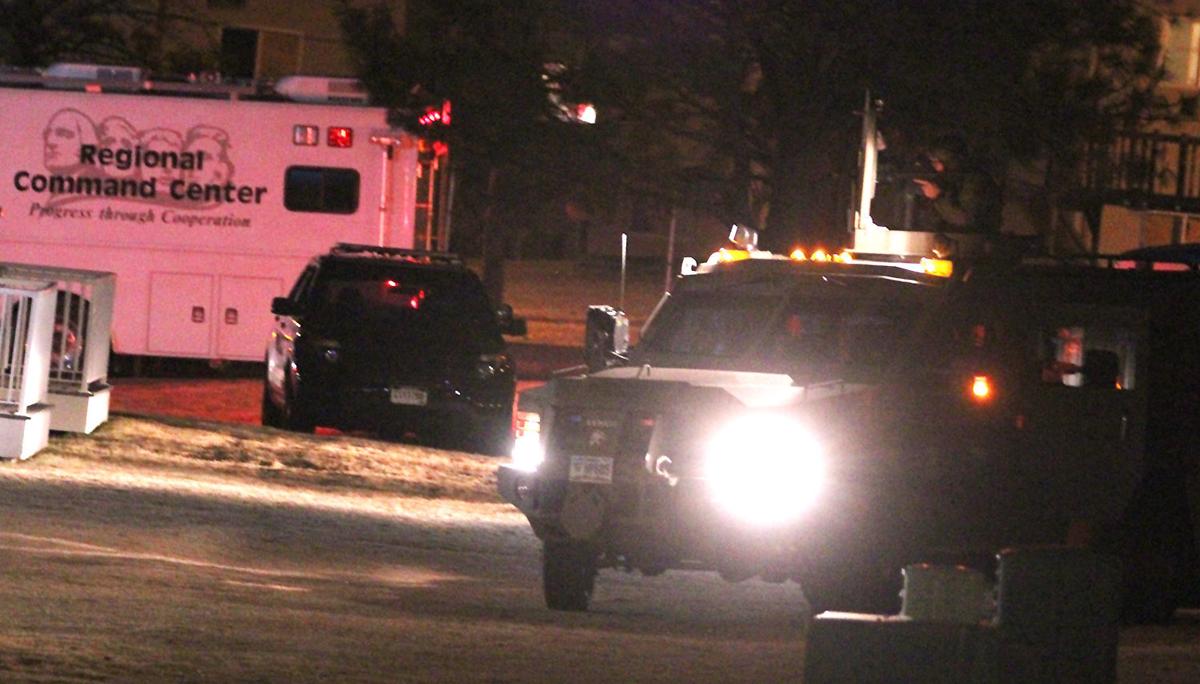 A sniper and mobile command center can be seen as the Rapid City-Pennington County Special Response Team (SRT) responds on Tuesday night. 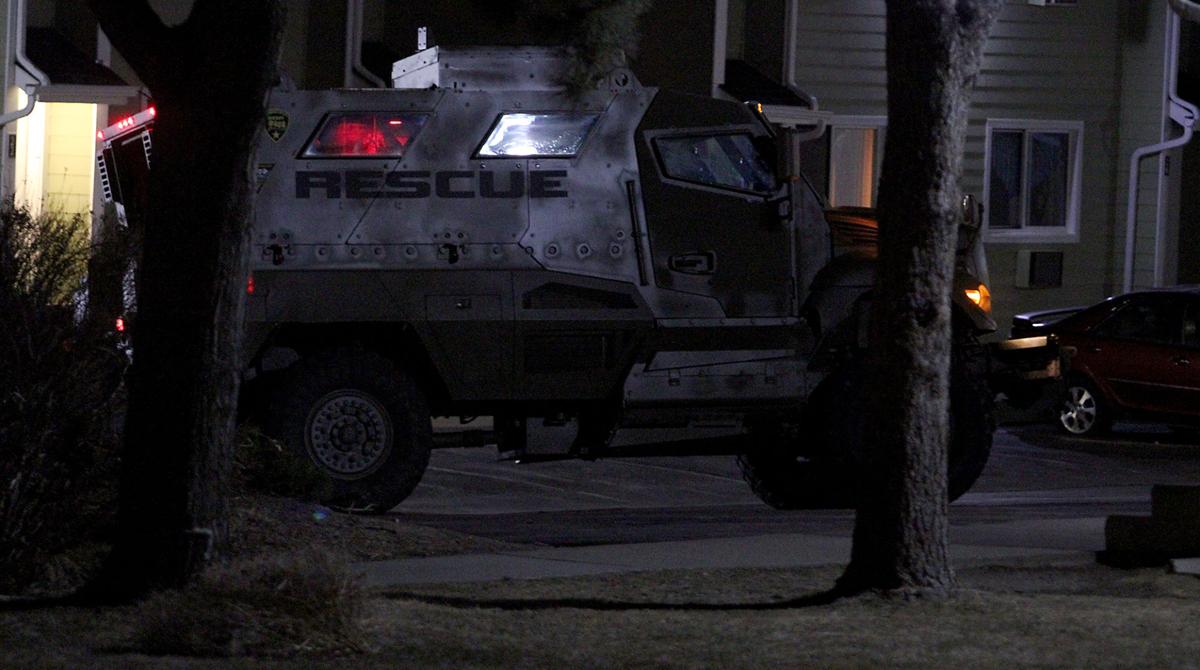 An armored vehicle at the scene as the Rapid City-Pennington County SRT responds to a report of minor suspects accused of shooting at other minors.

A SWAT team surrounded a Rapid City apartment building Tuesday afternoon but did not find the juvenile shooting suspects they sought.

"The individuals responsible in the shooting were not located inside the residence, and it is now believed they fled from the residence prior to law enforcement arrival," the Rapid City Police Department wrote in a 7:30 p.m. Facebook post. "Police continue to investigate the whereabouts of the responsible individuals and circumstances surrounding this incident."

At least two minors are accused of using at least one handgun to shoot at other minors, according to police spokesman Brendyn Medina. The victims were not hit by the gunfire or injured in any other way.

"The responsible individuals and victims in this incident are known to each other, and the shooting does not appear to be a random act," the Facebook post says.

Officers spoke with the victims and witnesses who identified the suspects and said they might have fled into an apartment building on the 100 block of East Knollwood Drive, according to the post.

People came outside the suspected unit after negotiating with the Rapid City-Pennington County Special Response Team but officers realized they weren't the suspects, Medina said. One person was arrested for a parole hold.

The suspects are believed to have been inside the unit before fleeing so law enforcement obtained a search warrant they will be executing Tuesday evening, Medina said.

“We’ve got kids with guns right now who’ve already posed a threat” to the community, Medina said as the SRT was deploying. “We’ve got barricaded individuals who are armed with dangerous weapons, a firearm, and so the Special Response Team has the specialized tactics and training to deal with individuals in this very circumstance. The goal is to bring this to a peaceful resolution.”

The Rapid City-Pennington County SRT is a team with negotiators, military-style vehicles, communication devices and other advanced equipment and training used for armed and high-risk situations.

Someone called 911 around 1:30 p.m. to report hearing gunshots near the Maplewood Townhouses at East Knollwood Drive and North Maple Street, Medina said.

After speaking with victims and witnesses, officers formed a perimeter around the apartment building on East Knollwood, the department posted to its social media sites around 4 p.m. The SRT mobilized around 5:15 p.m., Medina said.

Tuesday’s shooting impacted hundreds of children and staff at nearby North Middle School and Knollwood Elementary.

Both schools went into secure status, which meant all exterior doors were locked, no one was allowed in or out of the buildings, and students who needed to use the bathroom or anything else in the hallway were escorted by staff.

School usually ends at 3 p.m. but police didn’t think it was safe to release students until 3:30 p.m., Urban said. Students weren’t allowed to walk home and officers were on scene to protect children as they walked from the buildings to cars or buses.

“The police were really instrumental in helping students,” Urban said.

She said the special education bus couldn’t arrive at the two schools after hours since it has a timed schedule for traveling to all RCAS schools. Staff contacted the parents of special education students to arrange for rides home.

Staff remained at the schools to supervise students who usually walk home until they all received rides by 5:45 p.m., Urban said.

Tuesday’s SRT rollout was at least the third time in three years that it’s been deployed in response to minors allegedly shooting at or injuring others. It tried to make contact in August with a 14-year-old accused of shooting a teenager in the head but the suspect turned out not to be at the home it surrounded.

The SRT also responded in November 2019 after minors were accused of shooting into a bedroom near downtown Rapid City. Officers arrested several minors before the SRT arrived to surround a home they thought other suspects had fled into. The apartment ended up being filled with adults who had nothing to do with the shooting.

RCAS, the police department and statewide Fraternal Order of the Police sent a news release in December 2019 saying the community and criminal justice system needed a better way to respond to repeat minor offenders. ​

A Custer County deputy shot and injured a man on Sunday evening after the man refused to drop a gun and pointed it at him, according to two la…

Law enforcement officers with armor and weapons sit in the back of an armored military-style vehicle while responding Tuesday night to minor suspects accused of shooting at other minors.

A sniper and mobile command center can be seen as the Rapid City-Pennington County Special Response Team (SRT) responds on Tuesday night.

An armored vehicle at the scene as the Rapid City-Pennington County SRT responds to a report of minor suspects accused of shooting at other minors.