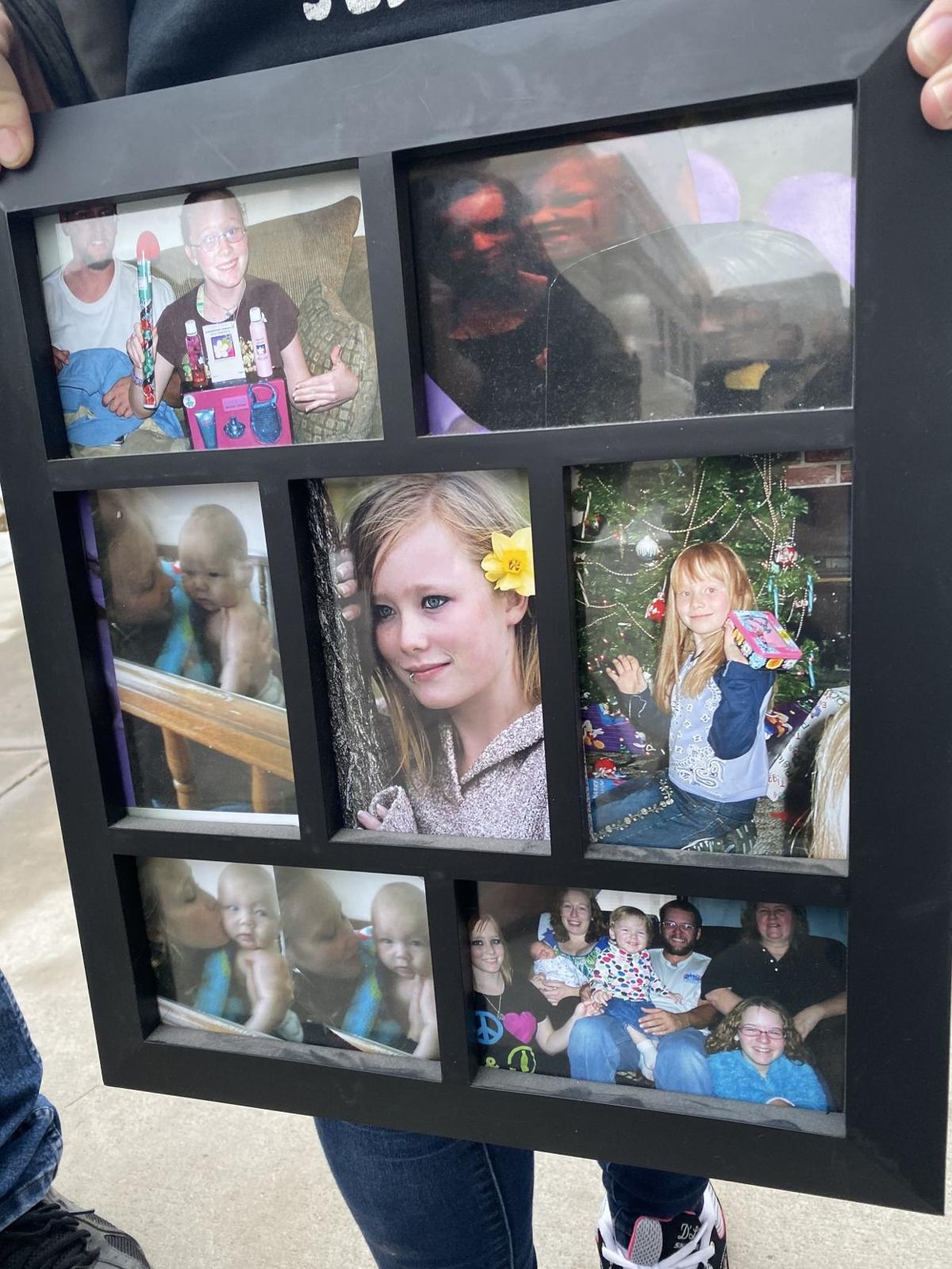 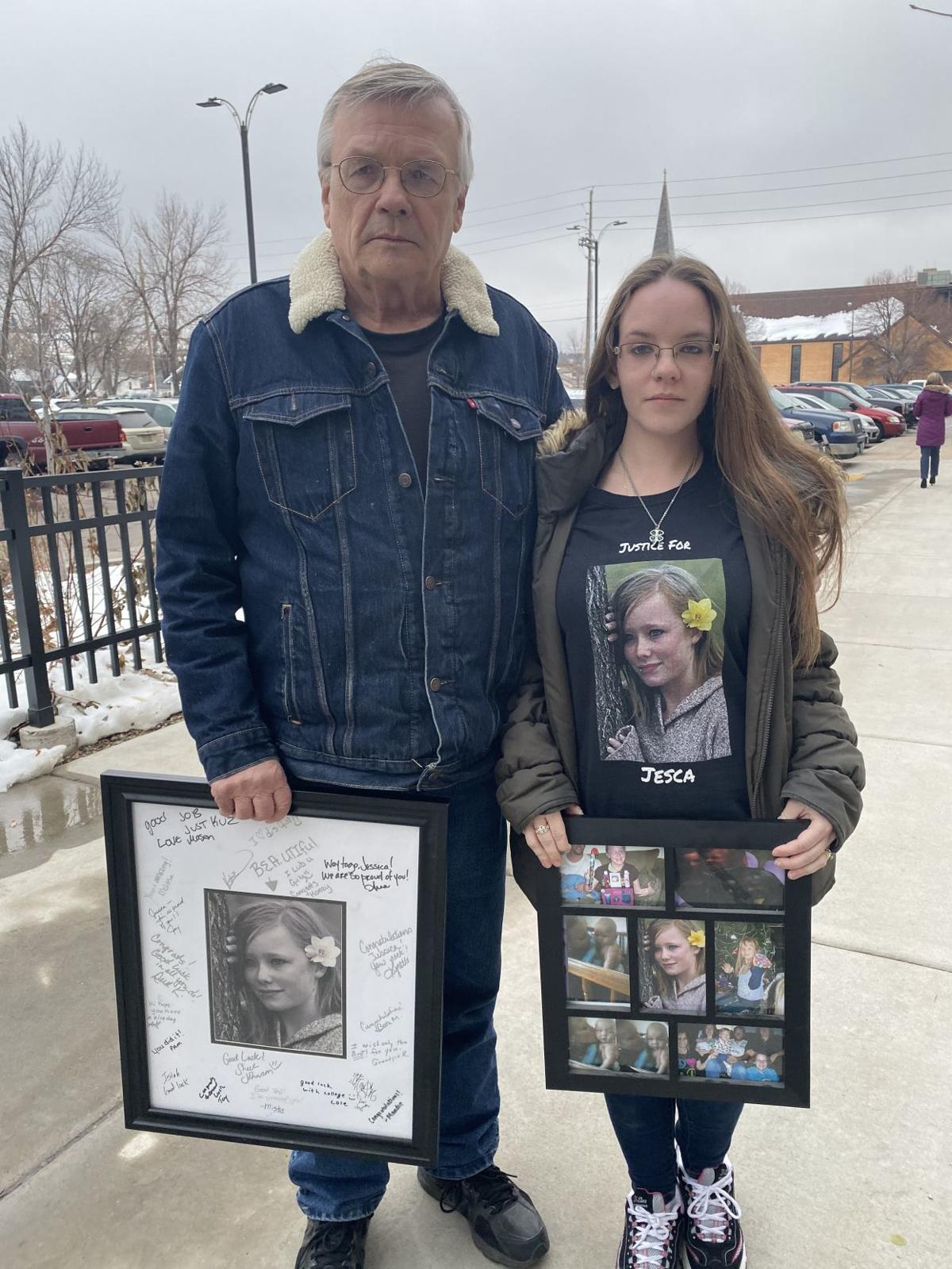 John and Misty Rehfeld hold photos of Jessica Rehfeld — their granddaughter and sister — after Jessica's ex-boyfriend was sentenced to life in prison for ordering her kidnapping and murder. 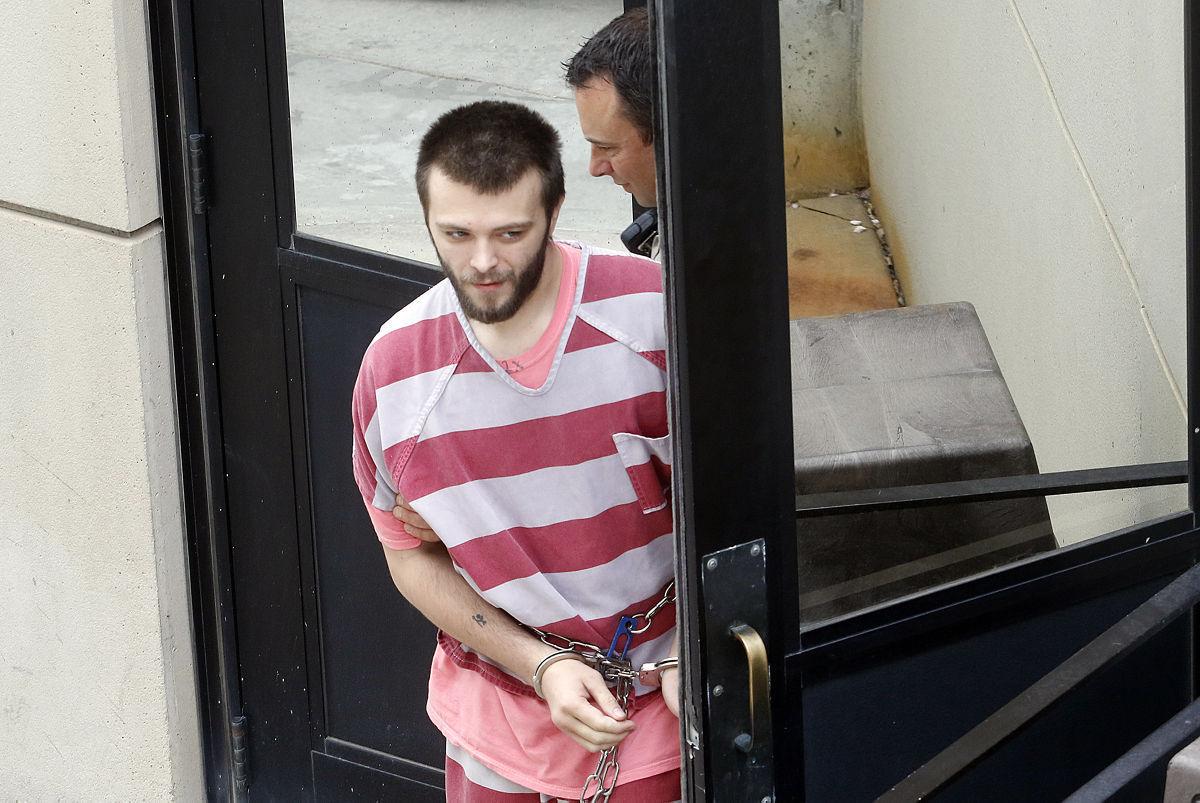 Jonathan Klinetobe, shown here before a court hearing, was sentenced to life in prison Thursday for his role in the murder of Jessica Rehfeld.

The Sturgis man who ordered and helped plan the 2015 kidnapping and murder of his ex-girlfriend will spend the rest of his life in prison after a judge decided that his history makes him a lifelong and "significant danger to society."

Jonathan Klinetobe, 30, was sentenced Thursday by Judge Heidi Linngren to life in prison without the chance of parole after he pleaded guilty in September to aiding and abetting the first-degree manslaughter of  Jessica Rehfeld, a 22-year-old from Rapid City. He was originally charged with first-degree murder and other crimes.

The sentencing came after four days of arguments and testimony at the state court in Rapid City from prosecutors and defense lawyers, a psychologist and psychiatrist hired by the defense, and Klinetobe and Rehfeld's family members.

"It's a complete victory. He'll never be able to do this to another woman," Misty Rehfeld said after the sentencing while holding a framed photo collage of her sister.

Klinetobe at first considered scaring or kidnapping Rehfeld after she broke up with him but decided she needed to be killed after he was served with a protection order, Linngren and prosecutors said.

In the weeks before the May 18, 2015 murder, Klinetobe subjected Rehfeld to "unspeakable" terror by threatening to kill her in texts, voicemails and social media, Linngren said.

"You're dead" and "no where is safe from me," Klinetobe said to Rehfeld, Vargo said.

Klinetobe also beat Rehfeld up on May 10, a detective said earlier this week.

Rehfeld did everything right by telling her family about the abuse, reporting the assault to the police and showing them her bruises, contacting a domestic violence agency, and obtaining a protection order, Linngren said.

"I feel my life is in danger ... he will kill me," Vargo said Rehfeld wrote in her application.

But Rehfeld advocating for herself "ended up getting her killed," Linngren said. "You could not deal with the fact she was no longer with you," she told Klinetobe.

Klinetobe made up a story about how the Hell's Angels would pay for Rehfeld to be killed because she had information on the motorcycle gang, and he hired Richard Hirth and David Schneider, both of Rapid City, to do the deed after having multiple planning meetings, prosecutors said. After Hirth and Schneider kidnapped and stabbed her to death while pretending to give her a ride to work, Klinetobe helped them bury her in the woods near Rockerville. Two weeks later, he hired Garland Brown and Michael Frye, both of Rapid City, to help him dig up Rehfeld's body from the shallow grave and bury her farther into the woods and deeper underground.

Rehfeld was initially labeled a missing person "not in immediate harm" by the Rapid City Police Department until it announced in May 2016 that an informant — revealed this week to be a woman who drove Klinetobe to visit the burial site several times — led them to her makeshift grave.

During that gap, Linngren said, Klinetobe told his accomplices not to tell the police about the murder, lied when interviewed on May 22, 2015 about Rehfeld's disappearance, lied to Rehfeld's friends and family and tried to blame her current boyfriend, and kept Rehfeld's purse, necklace and other items as "trophies."

Klinetobe treated Rehfeld like an object and thought she shouldn't be allowed to be with anyone else, Vargo said. The necklace, which Klinetobe asked Hirth to make sure was covered in blood as proof of death, served as Klinetobe's "title" or "proof of ownership" over Rehfeld.

Vargo made his closing arguments while standing next to a painting of Rehfeld surrounded by colorful flowers as a slideshow with photos of her played on a large screen.

He said while mental health professionals and family members may say Klinetobe has poor planning skills, the facts show that he was highly involved in Rehfeld's murder.

Klinetobe was thinking about his Hell's Angels story and hurting Rehfeld as early as March 1, 2015 when he texted Rehfeld about showing up at her work with the motorcycle gang, Vargo said. Hirth told police that Klinetobe got into his head, researched his past, aggressively recruited him, and had an unknown person call him on May 18, 2015 to go ahead with the murder that day.

Klinetobe's stepfather testified that Klinetobe could be successful if he was motivated or cared about things like video games, Vargo said. And Klinetobe was "way beyond motivated, he was obsessed" with Rehfeld and called her a "game" in a text message.

The fact that Klinetobe created fake stories about his motive and tried to evade police by lying and reburying Rehfeld's body proves that he knew that what he did was wrong, Vargo said. The mental health experts also testified that none of his disabilities impact his ability to feel remorse or tell right from wrong.

His stories may seem silly but "those lies worked" in this case and when animal control once showed up to his childhood home after he spoke about having hippos and crocodiles in his backyard, Vargo said.

Vargo said the only way to protect the public is to send Klinetobe to prison for the rest of his life because there's no evidence that treatment will work on him.

Elizabeth Regalado, one of Klinetobe's defense lawyers, displayed a slideshow with photos of her client as she asked Linngren to give her client the chance of parole sometime in the distant future. She said prison would give Klinetobe the chance to improve from medicine, counseling, job training and maturing, and he and his stories won't be dangerous if he's able to get his anger and aggression out of his head.

Regalado said Klinetobe "played a significant role" in Rehfeld's murder but was not the "mastermind" and didn't plan it on his own. She said he has a history of running his mouth but Rehfeld is only dead because this time he spoke to Hirth, the "one person in a million" who would agree to go along with his plot. She also noted that Hirth brought Schneider into the plot, was the one who planned the kidnap-murder method and carried it out, and told police he was responsible for the incident.

Regalado said her client's abusive childhood "full of trauma," bipolar spectrum disorder, seizures and intellectual disability didn't take away his ability to make decisions, but they did make him prone to criminal activity. And she said the U.S. Supreme Court has recognized that some of these factors make defendants "less morally capable."

Klinetobe spoke for the first time — and in an extremely quiet voice — when he said he was "truly sorry" for the pain he caused for Rehfeld's and his own family. "I'm not a bad guy" but I need help, he said.

He said he hoped to have the chance at parole so he could spend time with his two children, one who he's never met. Klinetobe said he would continue to take his medicine and make good choices if released from prison.

Linngren said she considered that Klinetobe was the victim of physical abuse, is intellectually disabled, and has serious mental and physical health conditions. But she said that doesn't make him less morally capable since his relatives testified that he can feel remorse and because other abuse victims, like his sister, don't go on to become violent.

Linngren noted that Klinetobe subjected Rehfeld to the same terror his mother faced when her abusive ex-husband tried to kill her after she served him a protection order. She said she's concerned about his history of domestic violence, ability for rehabilitation, lack of remorse and efforts to cover up his role by blaming others.

She said even though Klinetobe didn't commit the murder, he is responsible because he "started the ball rolling" and was the only one with a motive to kill.

Klinetobe had no physical reaction after Linngren announced her decision while Misty Rehfeld and prosecutors who worked on case hugged each other and cried.

The case against Hirth is on hold while he undergoes competency restoration at the state mental health hospital in Yankton. Schneider is waiting to being sentenced to life without parole after pleading guilty in 2017 to first-degree murder. Brown has been released from prison after receiving a four-year sentence in 2016 for being an accessory to the murder, according to the Department of Corrections. Frye, who pleaded guilty in 2016 to being an accessory and is out of jail without bond, will be sentenced after his Jan. 13 status hearing.

Sorrow and frustration abound in wake of Rehfeld murder revelations

On May 23, 2015, the Rapid City Police Department released a public notice stating that Jessica Ann Rehfeld, a 22-year-old Rapid City woman re…

The suspect in a Pine Ridge murder and a woman are accused of hiding a gun and shell casing related to the December shooting.

John and Misty Rehfeld hold photos of Jessica Rehfeld — their granddaughter and sister — after Jessica's ex-boyfriend was sentenced to life in prison for ordering her kidnapping and murder.

Jonathan Klinetobe, shown here before a court hearing, was sentenced to life in prison Thursday for his role in the murder of Jessica Rehfeld.