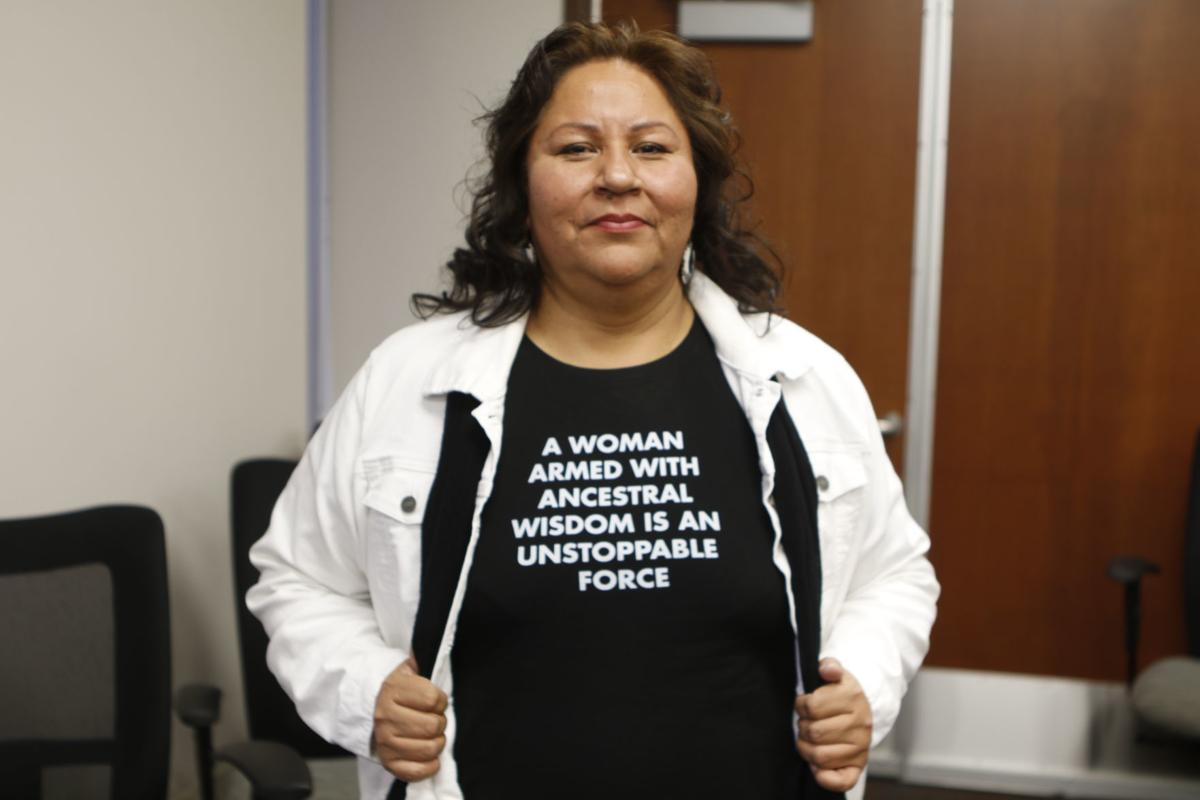 Ruth Cedar Face, one of the leaders of Seven Directions, a Lakota healing program for people going through addiction and the criminal justice system. 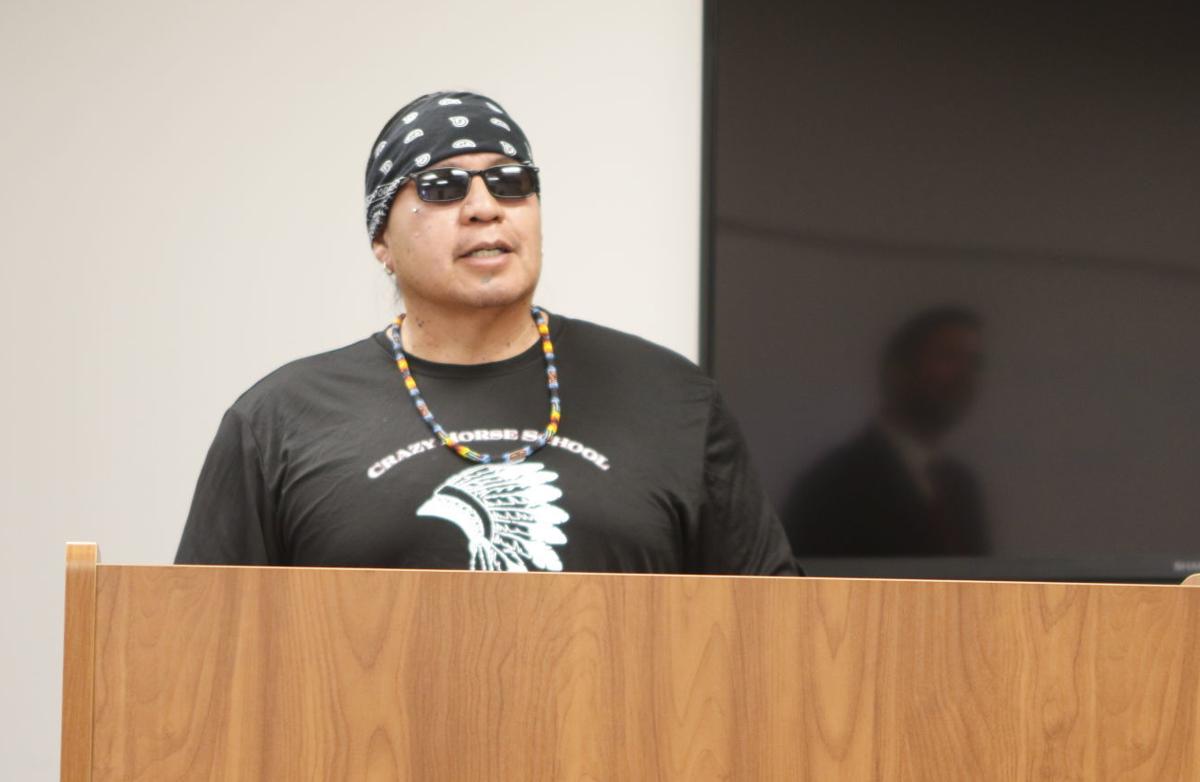 Chissie Spencer speaks about Seven Directions, a Lakota healing program for people going through addiction and the criminal justice system.

When Damon Patton was booked into the Pennington County Jail on an armed robbery charge last March, he was full of anger.

But the 39-year-old said a new Lakota cultural and healing program taught him to handle his emotions and connect with his culture.

Patton graduated from the 10-week class and, after taking a plea deal, was recently released from jail to begin his probation sentence. He continues to participate in Seven Directions classes at the Fork Real Cafe to make sure he stays on the right track.

The enthusiasm and success stories from people like Patton have encouraged the jail and Pennington County State's Attorney Office to expand the program in 2020.

Vargo said he wants people who commit crimes to be held accountable, but also be given a chance to succeed and change their behavior, which can be hard if people are released right back into the environment they came from with no treatment. Seven Directions gives people that chance by making sure they are released with a new mindset and skills, he said.

Jail Commander Rob Yantis said the program has had a "profound impact" on class students and the entire "dynamics of the cell blocks" since participants share the skills they learn with others.

Seven Directions is run by Chissie Spencer and Ruth Cedar Face, who have been working in the mental health and addiction fields since 1993. The pair began offering classes last spring in the jail and at the Fork Real Cafe for people on pre-trial release and probation, and for those participating in the adult diversion program, which expunges criminal charges for successful participants. Spencer and Cedar Face will soon expand their classes to the inpatient addiction program at the Care Campus.

"Everything we do is clinical but we use it in our traditional ways," said Cedar Face, a licensed addiction counselor from Porcupine.

The program aims to help people understand the root of their substance abuse or criminal behavior, Cedar Face said. She said some participants are surprised to realize that childhood trauma, like the death of a parent, still impacts their behavior today.

"Domestic violence, substance abuse, any kind of these social issues we see today ... those are symptoms of something deeper so we look at that something deeper," she said.

Participants learn about personal and intergenerational trauma and study cognitive behavioral therapy to learn how to change their thinking and behavior to align with Lakota values, Cedar Face said. The group burns sage, makes prayer ties, provides Lakota names to those who don't have them, and writes letters that Cedar Face later burns in a sweat lodge as a symbolic release of emotions and old behaviors.

The group also holds a wiping of tears ceremony led by a spiritual leader that involves smudging, eating sacred foods like wasna (a mixture of berries and bison meat), and prayers, Cedar Face said. During the ceremony, Patton said, people thought about how they've been hurt, how they've hurt others,and what's holding them back. When these feelings resurface in the future, he said, he now thinks back to that ceremony and prays.

Patton said he realized his anger issues stem from growing up in low-income environments in Denver and at the Lakota Homes apartments in Rapid City. He said the program taught him to recognize situations that can lead to anger, and identify symptoms before his anger becomes too intense.

Yantis shared that an inmate told him that he found himself in a situation that would have resulted in a fight in the past. But he remembered how he promised to change his behavior in front of the Seven Directions class.

"There was no way he could dishonor himself, or dishonor what he had learned or dishonor the program by engaging in something like that," Yantis said.

Incarcerated participants must demonstrate they can be respectful and safe in group environments, he said. The classes are open to people from any Native American tribe who need to address trauma or substance abuse, said Cedar Face. She said people may not graduate if they chose to drop out or are kicked out due to bad behavior. The programs are funded through the state's attorney office and MacArthur Foundation grant money, and is looking for more financial support as it expands, Vargo said.

Spencer, who is from Manderson and served multiple stints in jail when he was younger, developed Seven Directions while attending college in Washington state and visiting incarcerated people. He realized many CBT programs require people to read and complete worksheets, so he made his program inclusive for those who can't read and write.

"I had my own experiences being locked up and being in jail, and knowing what it means to sit there and not have anybody help you and talk to you when you have all these things going on inside your heart and your mind," he said.

Spencer later brought Seven Directions to the jail on the Pine Ridge Reservation where he said just 25 percent of participants recidivate within four years.

As part of their work, Spencer and Cedar Face write letters to judges or attend sentencings to ask for leniency for Seven Directions graduates. Spencer recently spoke at the sentencing of James Ladeaux, who was given a 10-year prison sentence for killing his brother Fred.

Patton said he plans to continue learning about his Lakota culture because he enjoys the "the way it teaches you how to love yourself and love your people and the respect it teaches us."

The electrician and CDL driver also hopes to open his own business and mentor others going through Seven Directions.

I want to "live different and get my life together and keep moving forward," Patton said.

Possible human remains were found Tuesday along Rapid Creek where it runs through a Rapid City golf course.

Black Hills Patrol could lose its security license if founder Ken Orrock responds to future calls or is involved with the business in any way,…

A nearly complete human skeleton and other evidence was found Tuesday along a creek at a Rapid City golf course.

VFW leader charged with sexually enticing minor via the internet

Visitors to the Pennington County and other Black Hills-area courts must wear face coverings beginning on Tuesday.

Ruth Cedar Face, one of the leaders of Seven Directions, a Lakota healing program for people going through addiction and the criminal justice system.

Chissie Spencer speaks about Seven Directions, a Lakota healing program for people going through addiction and the criminal justice system.