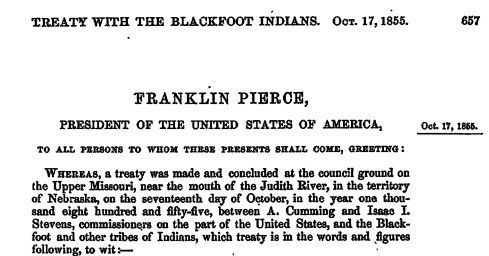 A lawsuit is citing this 1855 treaty between the U.S. government, Blackfeet Nation and other tribes to argue the U.S. government owes reparations to three men who were sexually abused by a pediatrician with the Indian Health Service. 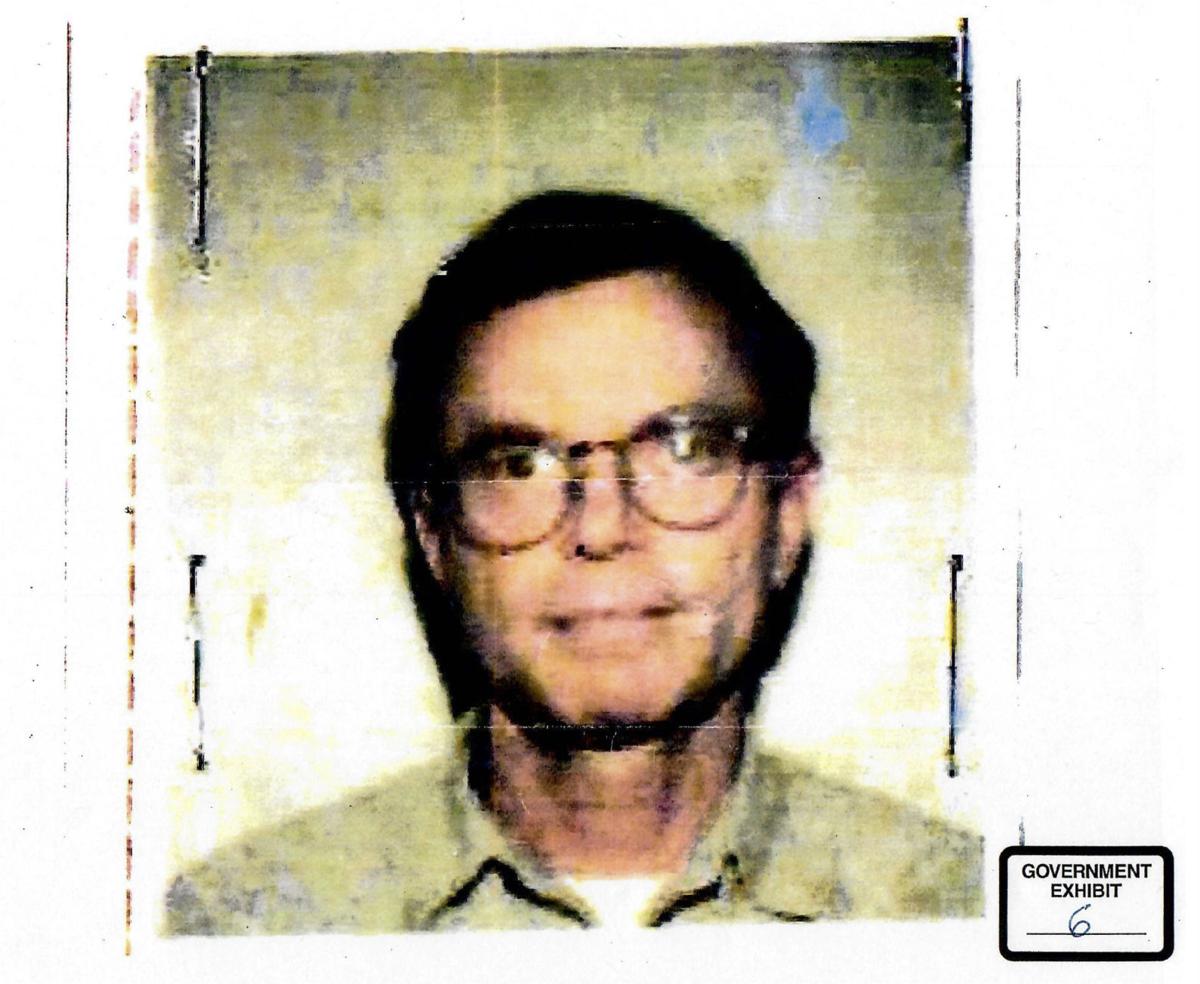 A lawsuit is citing an 1855 treaty between the U.S. government, Blackfeet Nation and other tribes to argue the Indian Health Service owes reparations to three men who say they were sexually abused by a pediatrician.

The treaty clearly states the U.S. government must protect Native Americans from white men like Stanley Patrick Weber, and should be interpreted as saying the government owes victims reparations, said Peter Janci, one of the attorneys who filed the lawsuit on Wednesday.

Similar arguments citing other treaties — including the "bad men among the whites" section of 1868 Fort Laramie Treaty — have held up in courts.

The lawsuit is suing the IHS by citing the treaty rather than suing Weber through traditional means in order to emphasize the importance of treaties between the U.S. government and tribes, and to highlight the culpability of the federal government in this case, Janci said.

"This wasn't one guy acting alone," he said. "He had access because of his position that was given by the United States government" and was allowed to continue treating patients despite evidence he was abusing them.

Weber, 70, is serving an 18-year prison sentence after a Montana jury convicted him last year of four sexual abuse crimes against two boys on the Blackfeet Reservation, where he worked at the IHS in Browning, Montana from 1992-1995. He is scheduled to be sentenced Feb. 10 at the federal courthouse in Rapid City after a jury convicted him in September of eight counts of sexual abuse against four boys he treated at the Pine Ridge IHS between 1995 and 2011. Weber is also facing two new sexual abuse charges stemming from his time in Pine Ridge.

Accusations about Weber sexually abusing boys circulated among his co-workers, patients and the wider community when he worked at the Pine Ridge and Browning IHS hospitals, according to a Wall Street Journal/Frontline investigation. But some complaints were ignored and not investigated, while others resulted in investigations that cleared him of any wrongdoing.

The three anonymous plaintiffs are all citizens of the Blackfeet Nation who were abused by Weber when they were children in Browning, Janci said. Two of the men are now 37 years old while one is 41. Janci said one of the plaintiffs was an official victim in the Montana trial, one was a witness in the trial, while the third came forward after reading about the case in the news.

The plaintiffs are asking for $3 million each after Weber caused "physical injury and pain and suffering" when he abused them numerous times in multiple locations, including in at least two offices at the Browning IHS, the complaint says.

The lawsuit, filed in the U.S. Court of Federal Claims in Washington, D.C., cites Articles 7 and 11 of the 1855 Treaty with the Blackfeet to argue that the U.S. government owes the plaintiffs compensation after failing to protect them from Weber.

"The United States is hereby bound to protect said Indians against depredations and other unlawful acts which white men residing in or passing through their country may commit," Article 7 says.

Weber is a white man who was living on the Blackfeet Reservation and working for the U.S. government when he sexually abused minors, the lawsuit says. Therefore the federal government "breached its treaty and contractual obligations to plaintiffs."

Article 7 "makes it clear that the government is to protect" Native Americans but it doesn't explain what happens when it fails to do so, Janci said.

Article 11 says tribes owe reparations to the U.S. government if Native Americans harm U.S. citizens (Native Americans were not counted as U.S. citizens at the time): "Tribes are hereby bound to deliver such offenders to the proper authorities for trial and punishment, and are held responsible, in their tribal capacity, to make reparation for depredations so committed."

Janci says courts have ruled that because treaties were signed under unfair conditions — over threat of war and the loss of land, withholding of rations, without adequate translators, etc. — they must be interpreted in a way that's more favorable towards tribes.

"Their choice was essentially agree to these terms or face the types of violence" being applied to tribes, Janci said of the treaties. "That's not a contract where both sides have equal bargaining power."

Janci said Article 11 should therefore be interpreted to mean that the U.S. government also owes reparations for when a white man harms Native Americans.

"That should apply both ways," Janci said. "The only fair way to read the contract is it provides for reparations for Native Americans when the government falls down on the job."

Janci said this case is similar to Elk v. United States and Richard v. United States, two cases that ended in victory for citizens of the Oglala Sioux Tribe who cited the 1868 Fort Laramie Treaty after being harmed by white men on the Pine Ridge Reservation.

"If bad men among the whites, or among other people subject to the authority of the United States, shall commit any wrong upon the person or property of the Indians, the United States will … reimburse the injured person for the loss sustained," the treaty says.

The same court rejected the "bad men among the whites argument" made by Rapid City lawyer Jim Leach but he won on appeal in 2012. The government settled with the families of Calonnie Randall and Robert Whirlwind Horse, who were killed by Timothy Hotz in a 2008 drunken hit-and-run.

The plaintiffs' "primary concern is to make sure this type of thing doesn't happen again" to children at the IHS, Janci said.

There are three ongoing investigations studying IHS's handling of the Weber case and how to prevent such future abuses. The IHS has also met with Blackfeet and Oglala Sioux tribal leaders, and announced in media statements that it will pay for counseling services — even if they aren't at an IHS facility or with an IHS provider — for Weber's victims. Victims can request this service by calling the IHS anonymous hotline at 301-443-0658.

But Janci says this isn't enough, that the IHS needs to directly reach out to Weber's patients to see if there are more victims and offer them counseling since not all survivors know others have come forward or feel comfortable asking for help.

"They know all the patients that were on Dr. Weber's rosters" and "if they wanted to they could reach out to those people," Janci said of the IHS. But "there has been no effort whatsoever to reach out and try to determine who the victims were and what they experienced."

Weber's lawyer and the IHS did not respond to requests for comment. But the IHS previously told the Journal that it won't reach out to victims due to privacy concerns.

"We recognize the strength and courage it takes for any victim to come forward. In the interest of privacy, the IHS has not reached out directly as an agency to the specific survivors in this situation," spokesman Joshua Barnett previously told the Journal.

Janci and his firm — Crew Janci LLC of Portland, Oregon — specialize in cases involving child sexual abuse. The team helped secure a $19.9 million jury verdict in a landmark case against the Boy Scouts of America.

A lawsuit is citing this 1855 treaty between the U.S. government, Blackfeet Nation and other tribes to argue the U.S. government owes reparations to three men who were sexually abused by a pediatrician with the Indian Health Service.