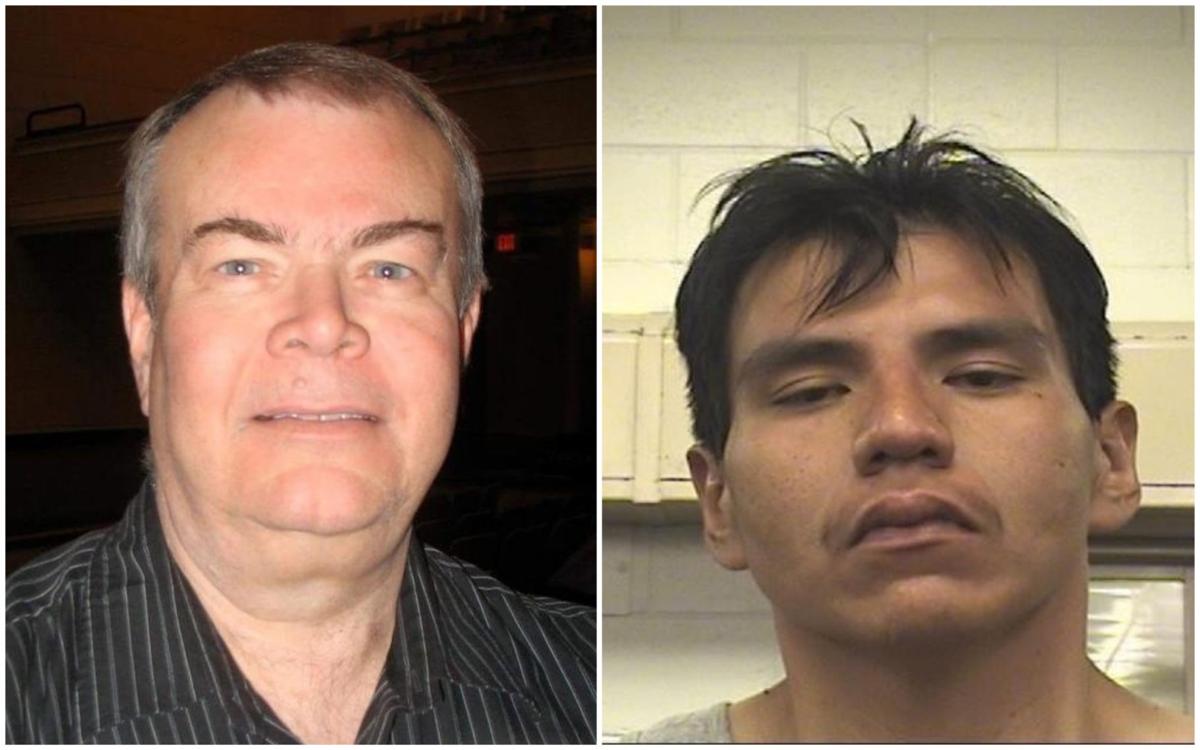 Andrew Eastman (right) was sentenced to 60 years in prison for killing Larry Mintzlaff. 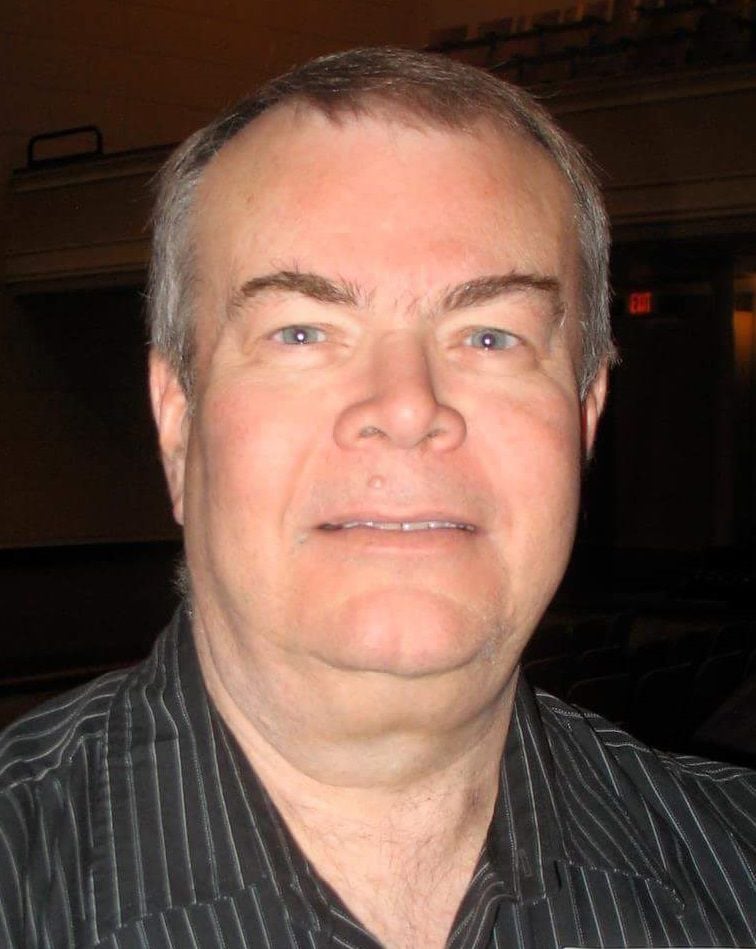 A man with a nightmare of a childhood was sentenced Thursday to 60 years in prison, three years after he fled his prison work site in city-owned pickup and beat a retired Rapid City teacher to death with a baseball bat.

Your family and the social services system “failed miserably,” Davis told Eastman at the Pennington County Court. “But, most importantly, you failed yourself.”

Eastman, a 31-year-old from Rapid City, pleaded guilty last July to first-degree manslaughter for killing the 64-year-old Mintzlaff, who subbed, taught and coached at North Middle School from 1977 to 2013.

Davis made his decision after a three-hour hearing that involved arguments from lawyers and victim impact statements from five of Mintzlaff’s loved ones. Davis also heard from a psychiatrist who evaluated Eastman, a former case manager for the defendant, and from Eastman himself.

The sentencing had been delayed due to Eastman developing cancer and then the coronavirus pandemic. Eastman is in remission after having surgery.

The killing happened on June 2, 2017, after Eastman — who was serving time in the Rapid City minimum security prison for drug ingestion and grand theft convictions — fled from his work release job at the Rapid City landfill in a city pickup.

Eastman admitted in court last year to killing Mintzlaff but didn't mention whether he knew Mintzlaff and said he couldn’t remember exactly what he did — or why — because he was under the influence of drugs and alcohol. Some of these details were revealed in court on Thursday.

Psychiatrist William Stratford said Eastman was reluctant to speak with him but eventually shared that his first sexual encounter was when he was a minor and with Mintzlaff. They later ended up at the same substance abuse clinic, said defense lawyer Randy Connelly.

In a May 2017 letter found at Mintzlaff's house, Eastman apologizes for something that happened in the past, professes his love for Mintzlaff and mentions having a past sexual relationship with him, said prosecutor Lara Roetzel.

Eastman checked in with a supervisor at 10:30 a.m. on June 2, 2017, but was nowhere to be found 15 minutes later, Roetzel said. Employees realized Eastman had fled in a city vehicle that was missing.

As authorities searched for Eastman, Mintzlaff’s brother called 911 on June 6 to ask for a welfare check since his family hadn’t heard from Mintzlaff since June 2.

Roetzel said police found a brutal crime scene. Mintzlaff had a giant gash on one cheek and the other side of his head had been crushed. Blood splatter covered the walls. His car, cell phone and wallet were missing.

An inmate later explained that some inmates take items during their job sorting out trash from recycles at the landfill, Roetzel said. The man said inmates had taken out a baseball bat and hammer, and Eastman knew where they were. The bat taken from the landfill was the “exact bat that was used to murder Larry,” Roetzel said.

Police reports say they officers also found Eastman’s Facebook messages to his brother mentioning he may have done “the worst thing I have ever done" but needs to figure out "how bad I (expletive) up."

Roetzel said the fact that Eastman took the bat before going to Mintzlaff's home shows he is a "cold-blooded killer" and planned the attack.

Connelly said the killing wasn't pre-planned or even murder, it was a manslaughter case based on an "spontaneous" decision in the "heat of passion."

Connelly said Eastman took the bat to break into another car because he knew he wouldn't get very far in a city vehicle. He said Eastman also took pills and drank an entire bottle of alcohol that were stolen from the landfill.

Connelly said his client went to Mintzlaff because he lived near the landfill and planned to ask him for a ride to an area where he could steal a car since Mintzlaff sometimes gave him rides and cash. He said Eastman expressed affection toward Mintzlaff in the letter found at the house so there's no reason for him to have planned to kill him.

The vague Facebook messages, Eastman's failure to get rid of the baseball bat, and his shock when he learned he was being charged with murder show he didn't know what he had done, Connelly said.

Mintzlaff’s two younger brothers, their wives and his best friend of 40 years described him as a passionate teacher, engaged citizen and volunteer who got along with everyone.

Mintzlaff “changed many lives” and was constantly stopped in public by former students who loved him, said his best friend Mike Richardson.

Mintzlaff grew up on a farm near Hermosa and was the fist person in his family to attend college, which he paid for himself. He was a coin collector, baseball lover and history buff who dressed up as Santa for his younger relatives each Christmas.

Dan Mintzlaff said his brother advocated for the less fortunate and minority groups and taught him to focus on the positive things in life and learn from others’ perspectives. Richardson said Mintzlaff loved to discuss politics and convinced him to be against the death penalty.

Mintzlaff stayed active in the community after he retired by substitute teaching, working on political campaigns, helping his brother at the farm, and hosting overseas visitors. He volunteered with Feeding South Dakota and continued his work with the South Dakota Education Association, which he represented for 19 years at the national level. He spoke with his mother on the phone every day, brought her groceries and drove her to her appointments. His mother — now 92 — has been too sick to attend the hearings.

Family members said the SDEA created a lifetime achievement award in memory of Mintzlaff and there’s also a scholarship in his honor for North Middle School students.

Derby said the family agreed to the plea deal because it would force Eastman to admit to what he did but the family received an unsatisfactory answer.

“I don’t accept” that you don’t remember how and why you killed him, Derby said, calling Eastman a “coward” with no remorse.

Derby said she has night terrors about Mintzlaff’s death and experiences PTSD each time she drives by the landfill.

She said she helped start the minimum-security prison in Rapid City as a place for inmates to reform and transition back into society, but Eastman didn't take advantage of that opportunity.

Roetzel asked Davis for the 60-year sentence, saying not everyone with “terrible” childhoods like Eastman go on to kill. She said the fact that Eastman can kill someone without knowing why makes him a danger to the community.

Connelly said nothing can justify Eastman's actions but there's important context from his "horrible, dreadful upbringing" that may explain his actions.

Connelly said his client was placed in the care of the Department of Social Services when he was 7 because his father abandoned him and his mother was an alcoholic. Eastman spent his childhood at nine different institutions, including two years at the state mental health hospital and with an abusive foster family. He was beaten by his older brother and a victim of sexual assault, tried to kill himself multiple times, and suffered from depression, PTSD and substance abuse disorders.

Eastman has a history of drug and theft convictions but the only other time he's hurt someone was when he was 11 and got in a fight with an older foster brother who was bullying him, Connelly said.

Connelly said Eastman was doing well once he was released from DSS custody. He started working, bought a car, had a baby with his girlfriend, and was asked to be a Job Corps counselor. But things went south when the girlfriend introduced him to meth.

Davis said that period of success shows that Eastman knew he could turn his life around but instead chose drugs.

Eastman, who appeared calm during the entire hearing, apologized to Mintzlaff's family.

He said he was sorry to drag them and Mintzlaff into his substance abuse issues and poor decisions.

"I still don't know why it happened" but "hatred or malice was not in my heart," he said.

Several of Eastman's family members attended the hearing but did speak.

Connelly asked Davis to suspend part of Eastman's sentence. He said 60 years would essentially be a life sentence since Eastman wouldn't be eligible for parole for 45 years, when he's 76.

He said Eastman has had no disciplinary problems during his three years in jail, where he attends bible and addiction classes.

Connelly also said no one involved in the case should be judged by their worst action.

Andrew Eastman (right) was sentenced to 60 years in prison for killing Larry Mintzlaff. 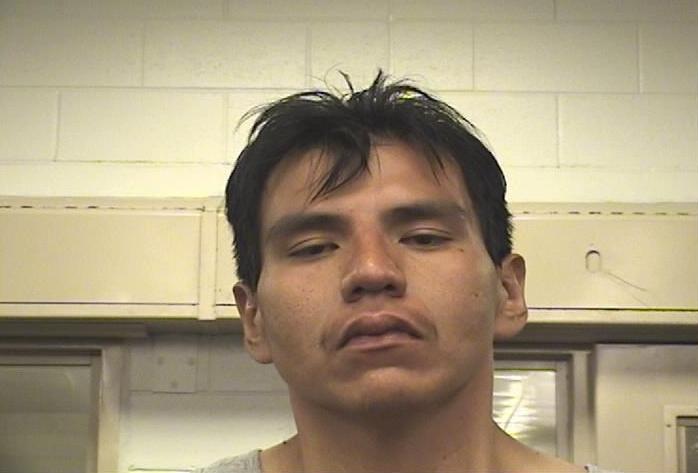