US expels Russian diplomats, imposes new round of sanctions

A Florida man who ran a fraudulent organic grain and seed business in Spearfish was sentenced to more than four years in prison and ordered to forfeit more than $15 million.

Kent Duane Anderson, a 50-year-old from Bradenton, Florida, was sentenced last week at the federal court in Sioux Falls after pleading guilty to conspiracy to commit wire fraud and money laundering.

“This investigation and prosecution should send a strong zero-tolerance message to those individuals engaged in the practice of defrauding the National Organic Program,” Anthony Mohatt of the U.S. Department of Agriculture said in a news release.

“Over the course of five years, Mr. Anderson engaged in a multi-million dollar fraud scheme where he falsely labeled products as organic products unbeknownst to consumers and USDA inspectors,” said David Talcott with the IRS. “Individuals who commit fraud with this degree of dishonesty and deceit deserve to be punished to the fullest extent of the law.”

Anderson was arrested in the Rapid City area in February 2020 and charged with 42 counts for allegedly running a $71 million scheme to fuel his “extravagant lifestyle," which includes an $8 million yacht, a multi-million Florida home and luxury cars, his indictment said.

Judge Karen Schreier sentenced Anderson to 51 months in prison and ordered him to forfeit $15,311,927. She is allowing Anderson, who was not jailed pre-trial, to self-surrender by March 15.

The forfeiture amount represents the net profit from Anderson’s fraudulent activity, according to a motion from prosecutors. He already paid $150,000 before sentencing. It’s unclear if the money will only go to the federal government or also to those he defrauded.

Anderson carried out his scheme through the Bar Two Bar Ranch, Green Leaf Resources and four other related businesses, according to the factual basis document he signed. 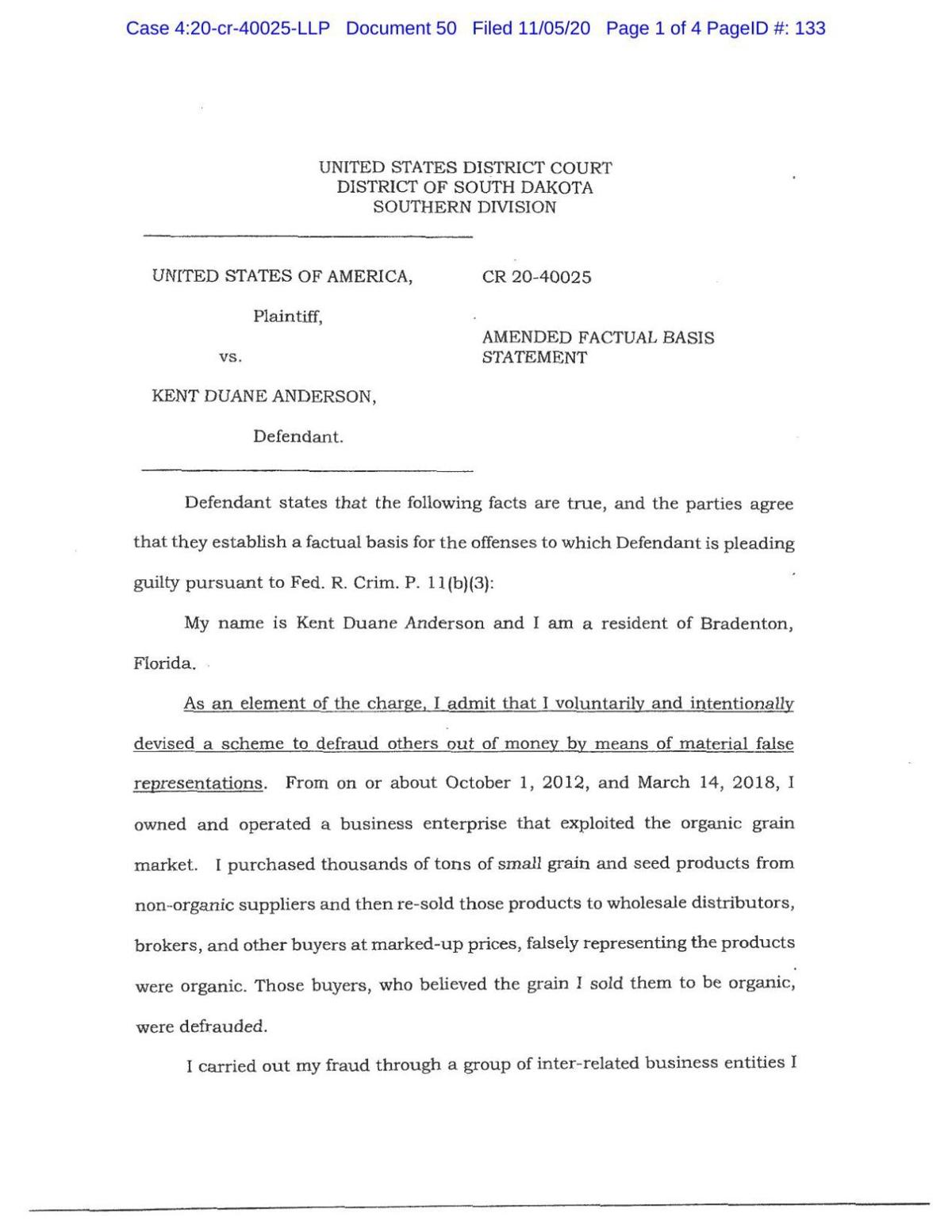 “I voluntarily and intentionally devised a scheme to defraud others out of money by means of false representations” by operating businesses that “exploits the organic grain market” from 2012 through 2018, he wrote in the document.

“I purchased thousands of tons of small grain and seed products from non-organic suppliers and then re-sold those products to wholesale distributors, brokers and other buyers at marked-up prices, falsely representing the products were organic,” Anderson wrote.

Anderson said he had employees obtain organic handler certifications from the USDA and then “used these certifications to falsely market and sell my products as being legitimate organic products.” He said some employees knew about and participated in the fraud.

Anderson's businesses made $71 million in fraudulent sales between 2012 and 2017, and he pocketed $11 million into his personal bank accounts, according to the indictment. He used the money to pay for his $2.4 million Florida home, land in South Dakota, his 86-foot Italian yacht, a $250,000 sports boat and more than $400,000 in jewelry from the U.S. Virgin Islands. He also bought a Maserati convertible, a Jaguar SUV and three Range Rover SUVs.

Questions about Anderson’s operation began arising in 2019. The state’s Public Utilities Commission investigated a business owned by Anderson after receiving complaints that it was not making payments and had purchased grain without the required license. Anderson never responded to inquiries and requests to conduct an inspection. ​