No local government officials will be held accountable for an April sinkhole and mine collapse that displaced dozens of Black Hawk residents after a judge removed Meade County and former commissioners from a lawsuit.

More than 40 residents of the Black Hawk subdivision were evacuated and dozens more are afraid their homes could collapse or lose value after the sinkhole exposed that part of the neighborhood was built over a shallow and mostly hollow gypsum mine.

In May more than 140 current and displaced residents filed a $75.5 million lawsuit at the Meade County court saying the mine collapse and ensuing problems stem from the negligence of government and private entities.

John Fitzgerald, attorney for the plaintiffs, previously removed current commissioners and the state of South Dakota in the hopes that doing so would allow the governments to help the displaced residents, including by applying to a FEMA grant.

But FEMA later said the residents aren’t eligible for the grant.

Remaining defendants include title, engineering and real estate companies, plus developers, engineers and lawyers who worked on the Hideaway Hills subdivision. The South Dakota Housing Development Authority is also a defendant.

In other Hideaway Hills news, Meade County has removed its webpage that had history about the mine, information about the collapse and public documents about the creation of the community.

Jerry Derr, assistant to the Meade County Commission, said he created the page to help educate residents after the mine collapse rather then individually send them information.

The page “served its purpose and that’s why it went away,” he said.

He said the residents now have a lawyer representing them and anyone can still access the documents through a public records request. 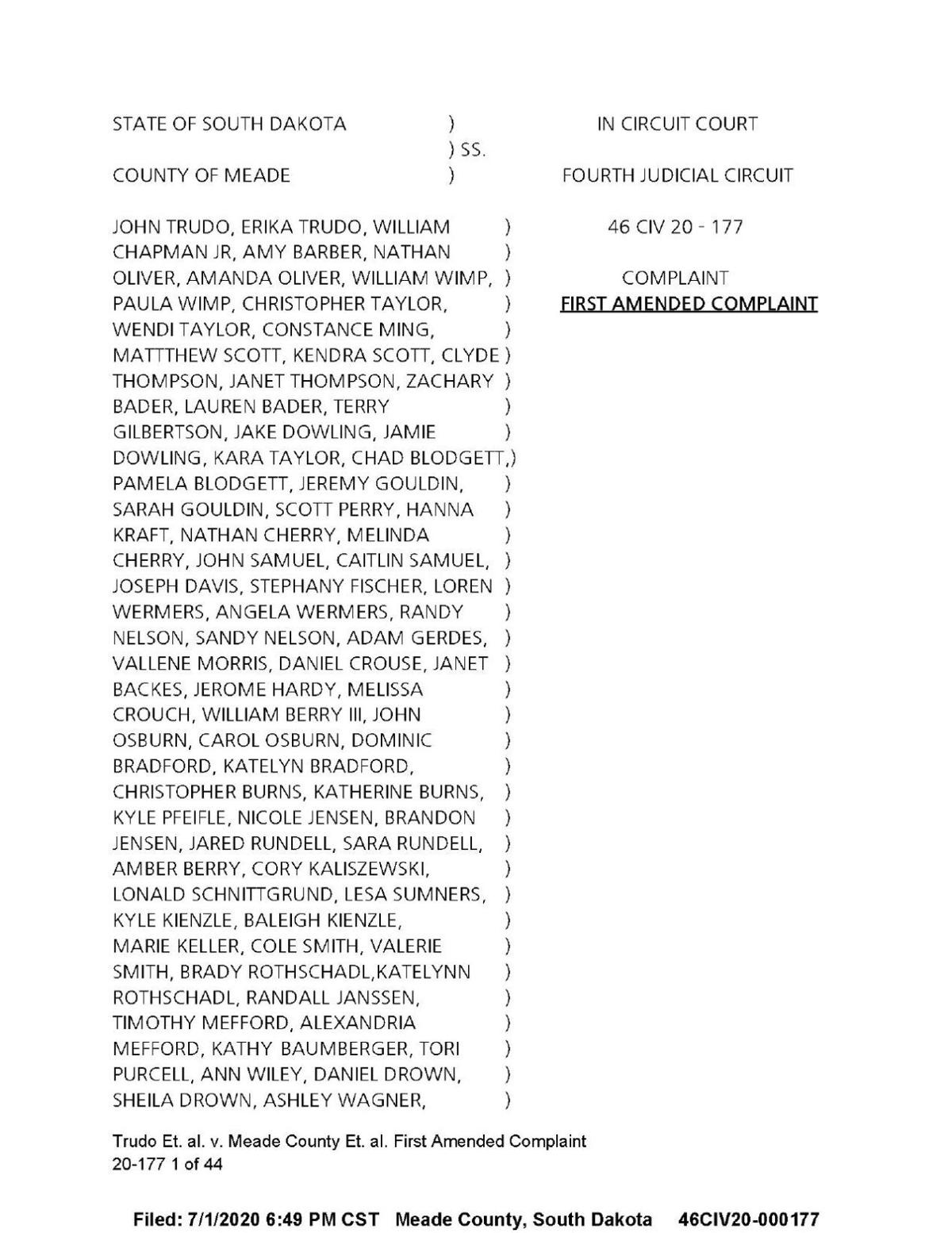 The lawsuit contains 14 counts —most dealing with negligence, breach of warrant and failure to warn — against dozens of entities and individuals.

It points to a preliminary plan for the development sent to the Meade County planning board, commissioners and planning staff in 2000 that mentions the existence of an underground mine and that field boring may be needed to identify any hazardous cavities. It’s unclear if that testing ever took place.

The lawsuit also points to a disclaimer that the mine exists that Fitzgerald said the developers shared with contractors and realtors but not with the families and the county’s Register of Deeds.

But even if there aren’t documents that show all defendants were warned about the mine in writing, Fitzgerald said, there’s no way they wouldn’t have known about it.

The old underground mine is “well known by people in the community” and everyone working on the project would have physically discovered or been told about it, Fitzgerald said.

Rebecca Mann, attorney for the defendant, wrote in her motion to dismiss that the disclaimer was provided after the plats were approved by the county.

Day granted the dismissal after Mann filed a motion to dismiss. 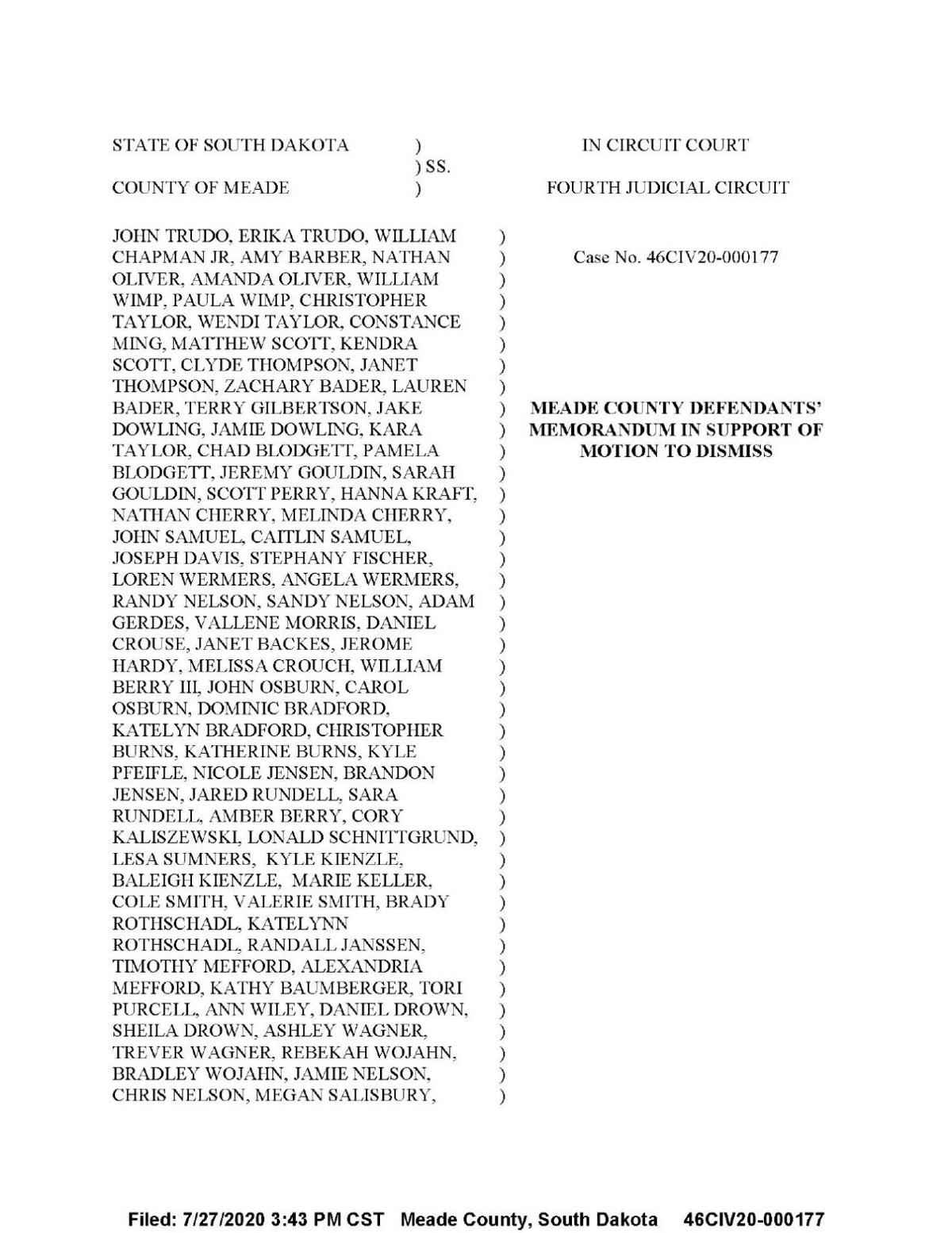 “The claims against the Meade County defendants were dismissed for a multitude of reasons, all of which are set forth in my brief,” Mann wrote in an email. “The main reason, however, is that the claims are barred by the public duty rule which recognizes that governmental entities are generally determined to owe governmental duties only to the public, not to individuals.”

Mann argued in her motion that plat approval is indeed a public safety issue but that it only applies to the greater public, not individuals. She cited two South Dakota Supreme Court rulings related to the public duty rule to back up her argument.

She said the information that Meade County allegedly knew about the mine doesn’t meet the legal definition of having actual knowledge of a dangerous situation which requires officials to know of a violation of the law.

Mann also successfully argued that all of the defendants were improperly served to the county auditor instead of the county commissioner.

Fitzgerald argued that the county did have “actual knowledge” that the community was built over a dangerous mine and sewage lagoon. He cited the preliminary plan that was sent to the county and said one of the commissioners owned a home by one of the mine entrances. Fitzgerald said the commissioner had the National Guard close the entrance in the 1960s because he was afraid his children would get hurt in the mine. 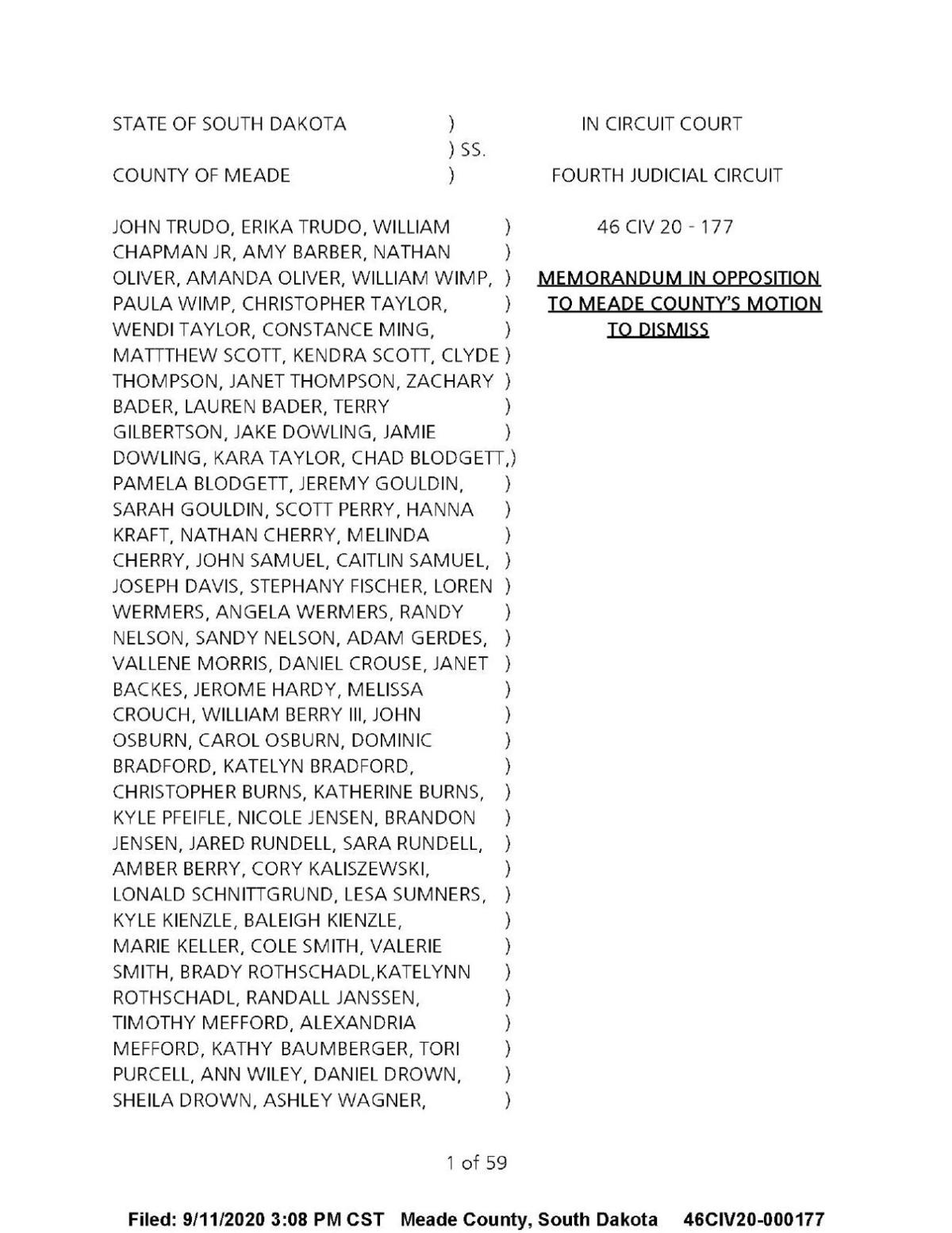 Fitzgerald also argued that the county engaged in misfeasance, or willful inappropriate action, and malfeasance, or corruption and fraud.

Those are an “exception to the public duty rule,” he told the Journal.

His argument centered around Powles, who Fitzgerald said was involved with creating and providing services to Hideaway Hills and nearby communities while also serving as the chairman of the Meade County Planning Committee. He said the county commissioners were aware of Powles’ involvement with the communities.

Powles “pushed to approve the dangerous subdivision because he was going to make a financial benefit,” Fitzgerald said.

Powles currently serves as the site manager for the Northdale Sanitary District, the group that manages infrastructure in Hideaway Hills, according to the district’s website.

21 guns stolen from Rapid City business found, $10K reward for others, one suspect in custody

Twenty-one of up to 40 firearms stolen last week from a Rapid City gun shop have been found and there is a $10,000 reward for information that… 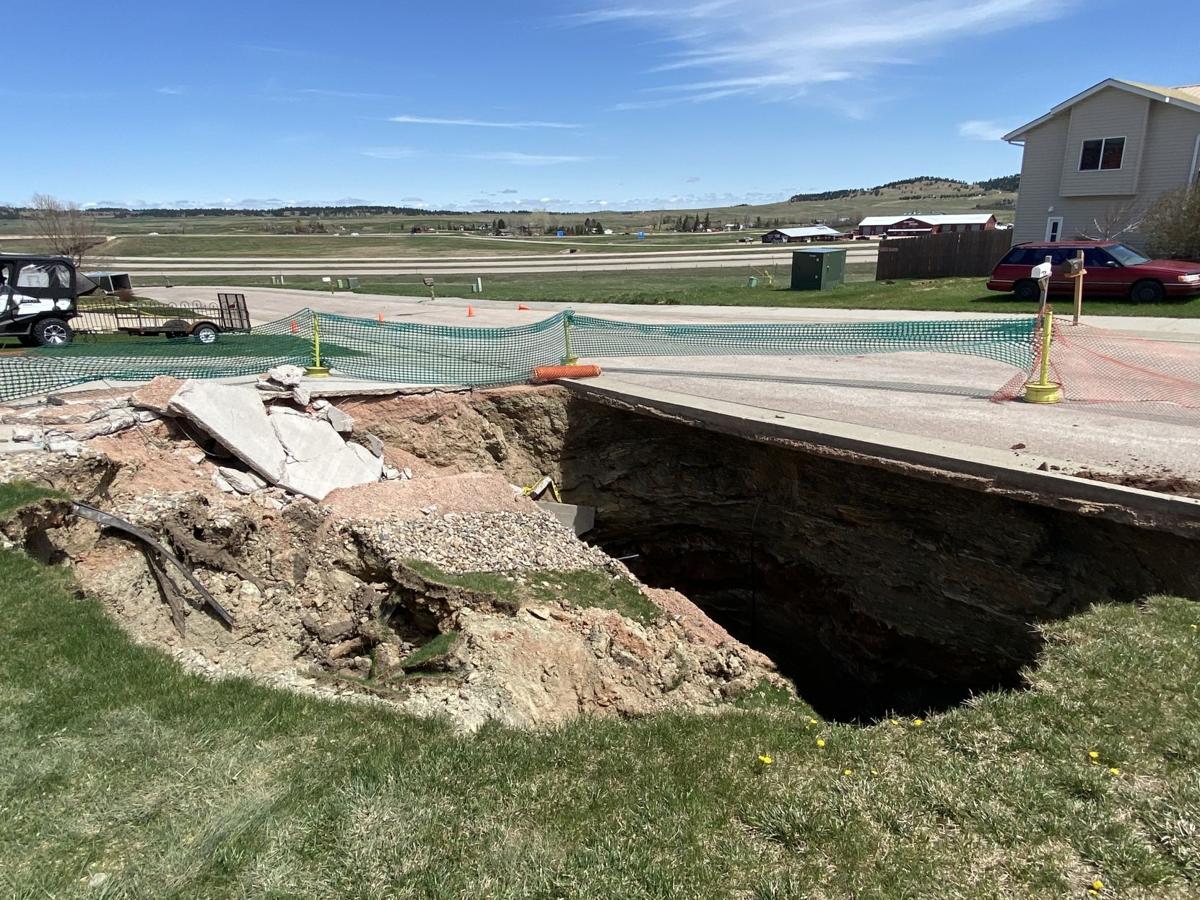 The sinkhole/collapsed mine in the Hideaway Hills community in Black Hawk. 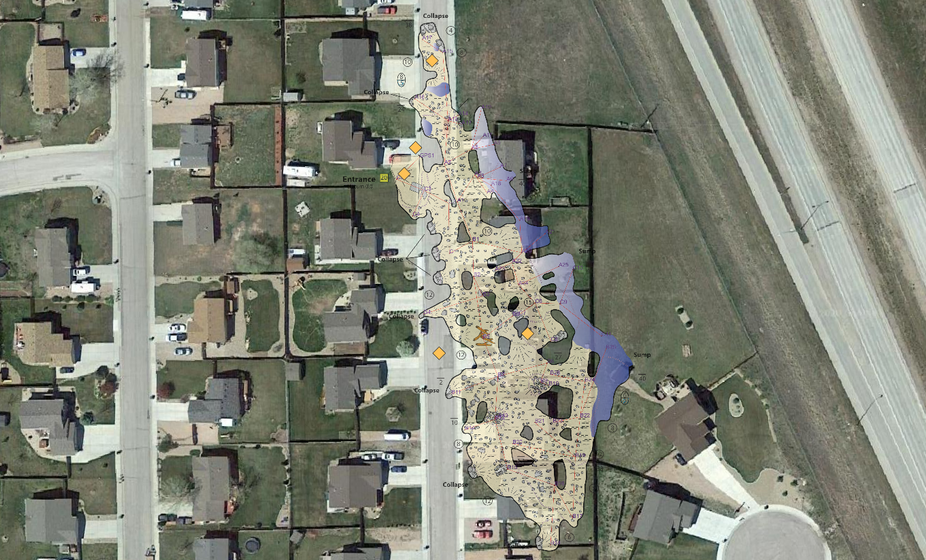 A map of the mine juxtaposed over East Daisy Street in the Hideaway Hills community of Black Hawk.