More advanced DNA testing will be conducted that could exonerate a man convicted of a 1983 double murder in Rapid City.

Scientific advancements since DNA was tested in 2015 will allow a lab to match hairs found at the crime scene in one of the victim’s hands to the victims, the man convicted of the murders, or a third-party perpetrator, defense lawyer John Murphy wrote in a motion asking for testing funds.

The Dec. 30 motion was not opposed by prosecutor Tracey Dollison Decker and approved the next day by Judge Matt Brown. 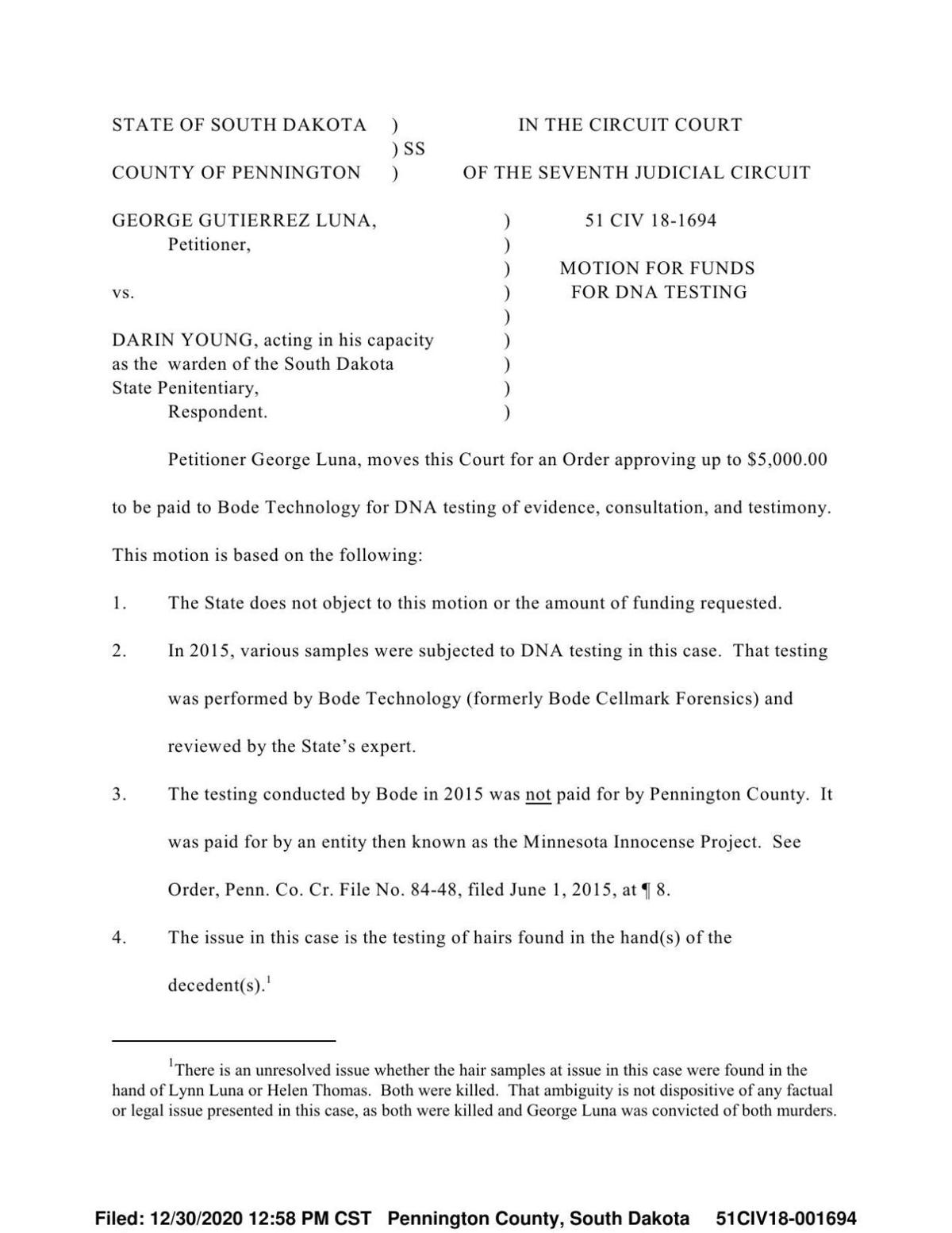 George Luna, 71, is serving two life sentences after a Pennington County jury found him guilty of the first-degree murders of his wife and mother-in-law.

Lynn Luna — a 26-year-old in the process of divorcing him — and her mother, Helen Thomas, 65, were found dead at their home on Fairview Street, according to Journal archives. They were beaten to death and suffered head fractures.

Luna is scheduled for a three-day habeas corpus trial in March where Brown will decide whether the new DNA evidence means he should receive a new trial.

The hairs could not be DNA tested in 1983 but mitochondrial DNA testing was performed at a private lab in 2015.

Mitochondrial DNA (mDNA) can trace a person’s maternal ancestry but can’t match a sample to a specific person like nuclear DNA (nDNA) can.

The mDNA testing showed the hairs couldn’t belong to Luna or one of two other men he believes could be the killer. However it didn’t exclude Doug Thomas, Helen’s son and Lynn’s brother, as contributing the hairs.

Because the mDNA is traced matrilineally, the results also mean the hairs could belong to Lynn or Helen, the motion says.

The nDNA testing couldn’t be done in 2015 because there were no hair roots needed for the procedure. Recent scientific advancement now allows nDNA testing on hair shafts, not just roots.

It’s unclear if the nDNA testing will be able to obtain a profile from the hairs, but there is only one way to find out, the motion says. If a profile is found, it could have a major impact on the case.

“Presently, the information available to the court is limited. It specifically excludes George Luna as the source of the hairs, but does not specifically link those hairs to Doug Thomas, the alleged third party perpetrator,” the motion says.

A profile would “substantially increase the information available to the court in making its decision as to whether George Luna’s conviction should be vacated and a new trial ordered … If testing reveals that the hairs recovered were from Doug Thomas, George Luna’s actual innocence claim will be substantially corroborated by scientific evidence.”

Thomas had threatened his mother in the fall of 1981 and fired a gun into the ceiling, according to a 1985 Supreme Court decision. He also quickly arrived at the crime scene after not seeing his relatives for a year and was also the beneficiary of his mother’s life insurance policy.

Luna wanted to argue during his original trial that Thomas or another man was the killer, or that they worked together. The Supreme Court said the evidence against them was weak because it lacked credibility and motive, and because Thomas had an alibi. The court ruled the trial judge was right to bar evidence about them

Luna testified for 12 an hours during the trial while an FBI agent testified that hairs found in Lynn's hand didn't belong to Doug Thomas, according to Journal archives. The article does not explain how the agent came to that conclusion.

Evidence against Luna included testimony and diary entries about his abuse and threats towards his wife and the fact that he had a restraining order preventing him from visiting his wife and their infant, archives show. The couple was divorcing and arguing over home ownership and child custody issues. There was mixed testimony about whether glass fragments founds on his clothing matched broken glass in the victims’ house.

There were no witnesses to the killings and the murder weapon was believed to be a tire-iron like object but was never found.

Brown approved spending $5,000 for the DNA testing, consultation and for the experts to testify at the trial. He said two experts from the Virginia-based lab could testify remotely over video so the county wouldn't have to pay for them to travel to South Dakota during a pandemic. ​

A Custer County deputy shot and injured a man on Sunday evening after the man refused to drop a gun and pointed it at him, according to two la…

Gov. Kristi Noem said in an executive order Friday that she directed the Highway Patrol superintendent to bring a lawsuit against the voter-ap…