Gov. Kristi Noem filed a lawsuit Friday asking a judge to order the Department of Interior to issue a fireworks permit for the Independence Day celebration at Mount Rushmore.

“Mount Rushmore is the very best place to celebrate America’s birthday and all that makes our country special,” Noem said in a news release. The Joe Biden administration “departed from precedent and reneged” on an agreement about the fireworks “without any meaningful explanation."

Trump attended the event, which was protested by more than 100 Lakota activists and allies who blocked the highway for several hours.

The 23-page lawsuit against Secretary Deb Haaland and three other DOI officials was filed in federal court by two of Noem’s attorneys and three Virginia-based lawyers.

It accuses the DOI of violating the Administrative Procedure Act by making an arbitrary decision, and the non-delegation doctrine of the Constitution since Congress gave it too much leniency in how it makes decisions.

The lawsuit says the fireworks celebration generates millions of dollars in advertising and tourism that benefits the state, businesses and every resident.

However, the lawsuit could backfire and create an economic loss if there’s a settlement or the DOI wins and South Dakota must pay fines and fees.

“Tourism is such a big economic driver for our state,” especially the fireworks event, Noem spokesman Ian Fury said when asked about this risk. “That’s why it’s so important for Gov. Noem to go to bat to make sure we have our fireworks this year.”

The lawsuit, like all others filed by the state, will be paid through the extraordinary litigation fund, which is funded with taxpayer money.

What follows is from the lawsuit:

The DOI ended the fireworks in 2010 due to the mountain pine beetle infestation creating an extreme fire risk, but always intended to resume the event once it was safe, the lawsuit argues.

South Dakota and Trump’s DOI signed an October 2019 agreement to continue the fireworks in 2020 and “the years thereafter,” the lawsuit says. 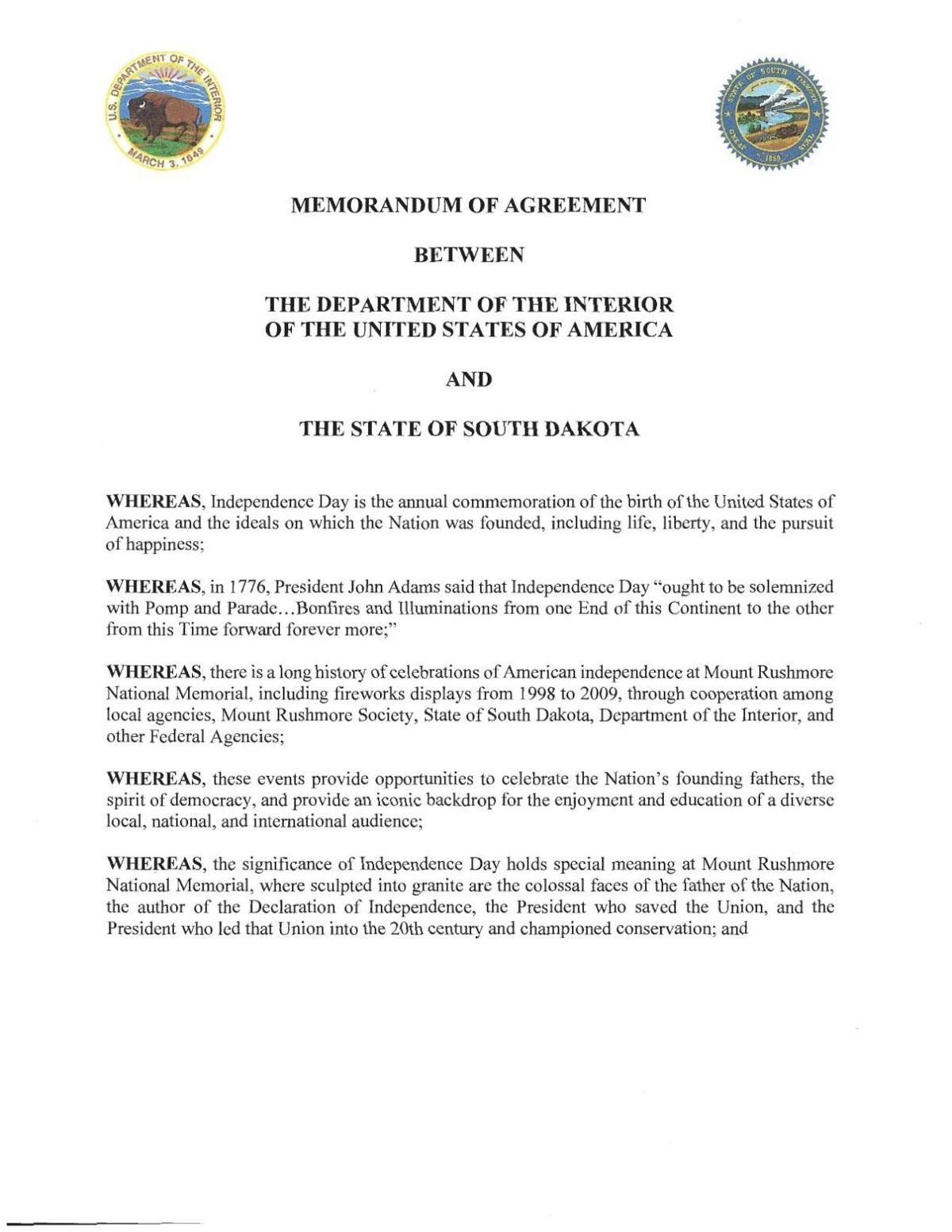 The DOI later issued a permit to allow the 2020 fireworks, but only if the Secretary agreed that conditions in a detailed “Go/no-go checklist” were met an hour before the event.

South Dakota asked for another permit before and after President Biden was elected but his DOI sent “an abrupt” letter in March saying it won’t allow the fireworks this year due to COVID-19, tribal opposition, possible environmental harms and other reasons. 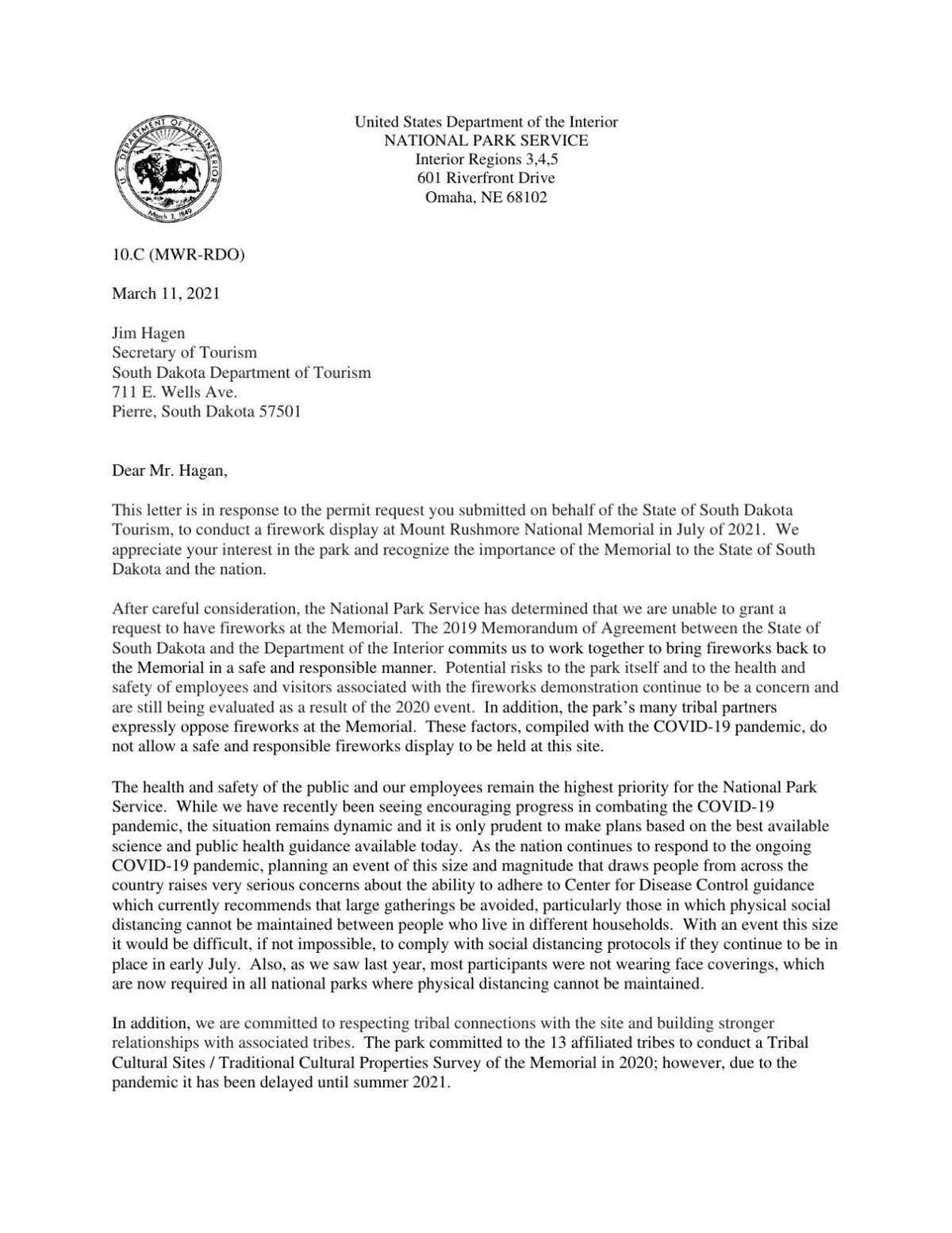 The DOI’s concerns were explained in “vague and speculative” ways, not with hard facts and examples of how 2021 conditions have changed since 2020, the lawsuit says. This violates the Administrative Procedure Act’s prohibition against “arbitrary and capricious” decisions.

For example, the lawsuit says the DOI didn’t explain how this year’s fire risk is worse than last year and hasn’t tested whether water had an increase in chemicals after the 2020 fireworks. The COVID-19 concerns don’t make sense given that no cases were traced to last year’s event, there’s now a vaccine and Biden wants this July 4 to mark “independence from this virus.”

The lawsuit also says the DOI contradicts itself by saying the fireworks will have a negative impact by creating a COVID-19 risk while also preventing more people from visiting the memorial, which would create a higher risk of transmission.

Noem sent Biden a “point-by-point rebuttal” on April 13 but has received no response.

The rebuttal and lawsuit say that tribal nations with connections to Mount Rushmore were consulted ahead of the 2020 event.

The DOI’s February 2020 environmental assessment says it reached out to 20 tribes and those that responded were all opposed to the fireworks. ​

Haaland, a member of the Laguna Pueblo, is the first Native American secretary of the DOI. Both she and Biden have expressed commitment to protecting tribal sovereignty and providing resources.