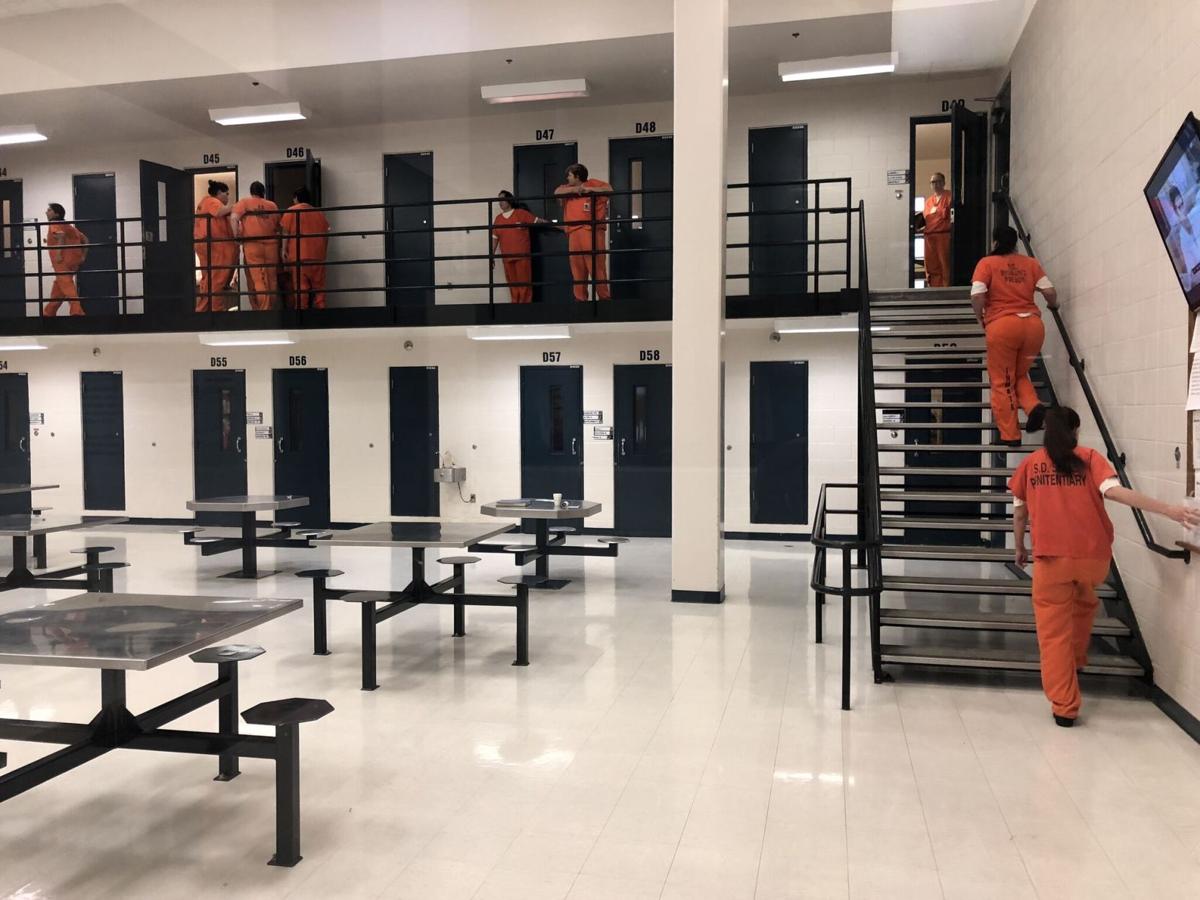 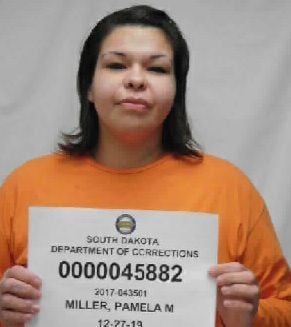 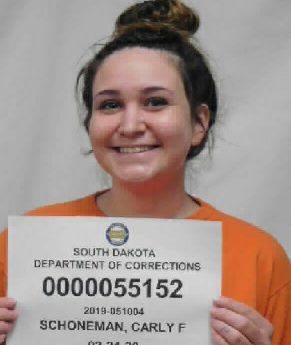 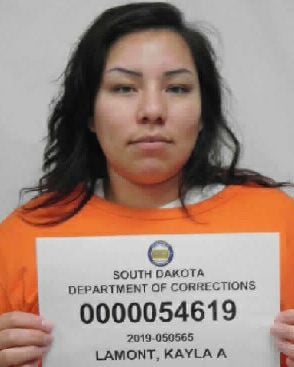 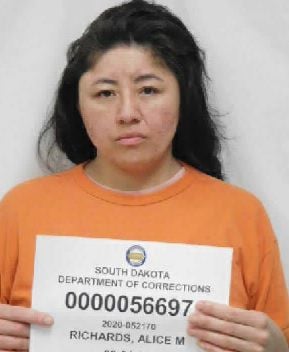 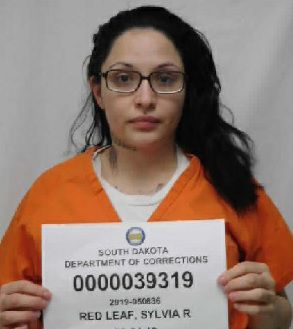 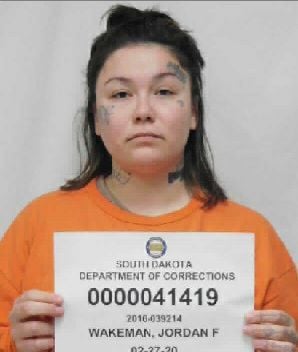 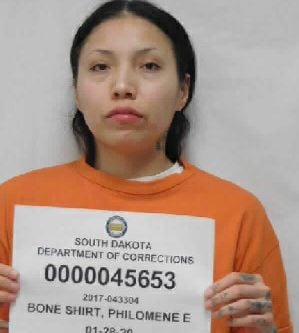 Nine inmates fled the minimum-security unit of the women's prison in Pierre on Monday night, hours after it was announced that a detainee in the same unit tested positive for coronavirus.

One of those inmates — who's awaiting COVID-19 test results and has symptoms of the virus — was arrested in Rapid City and booked into the Pennington County Jail, according to a Rapid City Police Department e-mail that warns of a "possible COVID-19 exposure."

The police officer most involved in the arrest is self-quarantining at home while waiting for the woman's test results, according to police spokesman Brendyn Medina.

The Department of Corrections sent a press release Tuesday morning announcing the escape but only said eight inmates walked away. The Journal later learned that a ninth woman had escaped and was booked into the local jail.

Gov. Kristi Noem confirmed to the Journal during a Tuesday morning press conference that a ninth inmate had escaped and was detained. She also said that all nine women were from the same minimum-security unit as the inmate who tested positive for COVID-19, but she doesn't know if they had any interaction with her.

The women left the minimum-security unit at 8:43 p.m. through an exterior door, according to the DOC news release.

"Women’s prison staff began escape procedures and law enforcement was notified," the news release says. "The South Dakota Highway Patrol aircraft was used to assist ground operations in its search for the inmates."

This is a "very serious situation," Kim Malsam-Rysdon, secretary of the Department of Health, said of the escape.

Malsam-Rysdon also said the detained woman was tested for COVID-19 and the DOH is awaiting the results.

Noem did not confirm where the detained woman was held but the email obtained by the Journal says the woman was booked into the Pennington County Jail after being arrested in Rapid City early Tuesday morning. The jail website says she was booked at 2:07 a.m. Tuesday, charged with second-degree escape by a prisoner and is being held for the Hughes County Sheriff's Office where Pierre is located.

Malsam-Rysdon said the inmate who tested positive for COVID-19 "continues to do well" and is being held in isolation. She said DOH and DOC staff are caring for her by following guidelines set by the Centers for Disease Control. The secretary said at a Monday press conference that everyone who came into contact with her is also being isolated, and that the DOH is investigating how the woman contracted the virus.

Maggie Seidel, spokeswoman for Gov. Kristi Noem, told the Journal that she can't share where the inmate worked before the DOC temporarily barred low-security inmates from going to their outside work assignments. But she said the DOH notifies everyone who comes into close contact with someone who tests positive for COVID-19. Seidel also said she can't say where the woman is being isolated, or how many fellow inmates and staffers are being isolated due to having close contact with her.

A sergeant wrote that a Highway Patrol sergeant called him Monday night to let him know about the prison escape and give him details on the woman who fled to Rapid City.

The sergeant said he passed the information to a police officer who observed the woman walking into her mother's home in Rapid City. This happened at 1:20 a.m. Tuesday, Assistant Police Chief Don Hedrick told the Journal.

The sergeant said he and others surrounded the home and told the woman to come out. The woman jumped out a back window and the sergeant arrested her.

"She immediately told me she was sick, but I didn’t think much of it," the sergeant wrote.

He said the police officer handcuffed the woman while a second officer transported her to the jail. The sergeant said he also asked the first officer to interview the woman about the other escapees.

Officers have been wearing gloves each time they respond to an incident in case they end up having contact with anyone, Hedrick told the Journal. But the police department was unaware that the woman had possibly been exposed to COVID-19 when she was arrested and booked into jail.

The sergeant wrote he then spoke with a dispatcher who said the DOC said the woman had been tested and in isolation for possibly having COVID-19, but the results had not yet come back. The sergeant then spoke with an agent from the Division of Criminal Investigations who said while the woman was in the same prison block as the inmate who tested positive, she wasn't identified as someone who needed to be tested or placed in isolation.

"So I received some inconsistent statements," the sergeant wrote.

After learning this new information, the sergeant wrote, he called the officer who was interviewing the woman. The sergeant said he could hear the woman "hacking" in the background. The officer said the woman wasn't doing well and the sergeant told him to put on a mask and contact the jail.

The sergeant said the officer later told him that the woman was wheezing and had a 103-degree temperature.

Symptoms of COVID-19 include fever, coughing and shortness of breath.

“This incident serves as a clear reminder that we, as police officers, are in Critical Infrastructure Positions and must be ready to stand and serve, no matter the circumstance,” said Police Chief Karl Jegeris. “We are well aware of the current health situation affecting the world and have an obligation to our community to be ready to hold offenders in our city accountable while doing everything we can to mitigate the risk of exposure to our staff.”

Helene Duhamel, spokeswoman for the Pennington County Sheriff's Office and a state senator, said the detained escapee will be transferred from the jail to the DOC but couldn't say when due to security concerns.

She said the office will not comment on whether jail staff knew of the woman's possible exposure to COVID-19, where she is being held within the jail, how many employees came into contact with the woman, or whether any staff members are being quarantined.

"We are not going to make any comments about any specific inmate’s or staff’s health condition," Duhamel said.

Flute, Wakeman and Miller were taken into custody on the Crow Creek Reservation on Tuesday and the state is working with the tribe to return them to state custody, the DOC announced Tuesday afternoon.

The escapees are serving sentences ranging from seven months to nearly 13 years (with five suspended).

Seven of the women are serving time for drug possession convictions while one is imprisoned for her third conviction of driving while intoxicated. Some of the women were also convicted of simple assault, eluding, second-degree robbery and failure to appear.

The detained woman was convicted of forgery and attempted drug distribution, according to the DOC website.

The Division of Criminal Investigation is investigating the incident. Women who are caught may be charged with second-degree escape for leaving a non-secure correctional facility without permission. The Class 5 felony is punishable by up to five years in prison.

The Department of Corrections and Gov. Kristi Noem said they’re not planning on conducting any special releases from the state’s prisons durin…

Inaction on immigration: A bipartisan problem