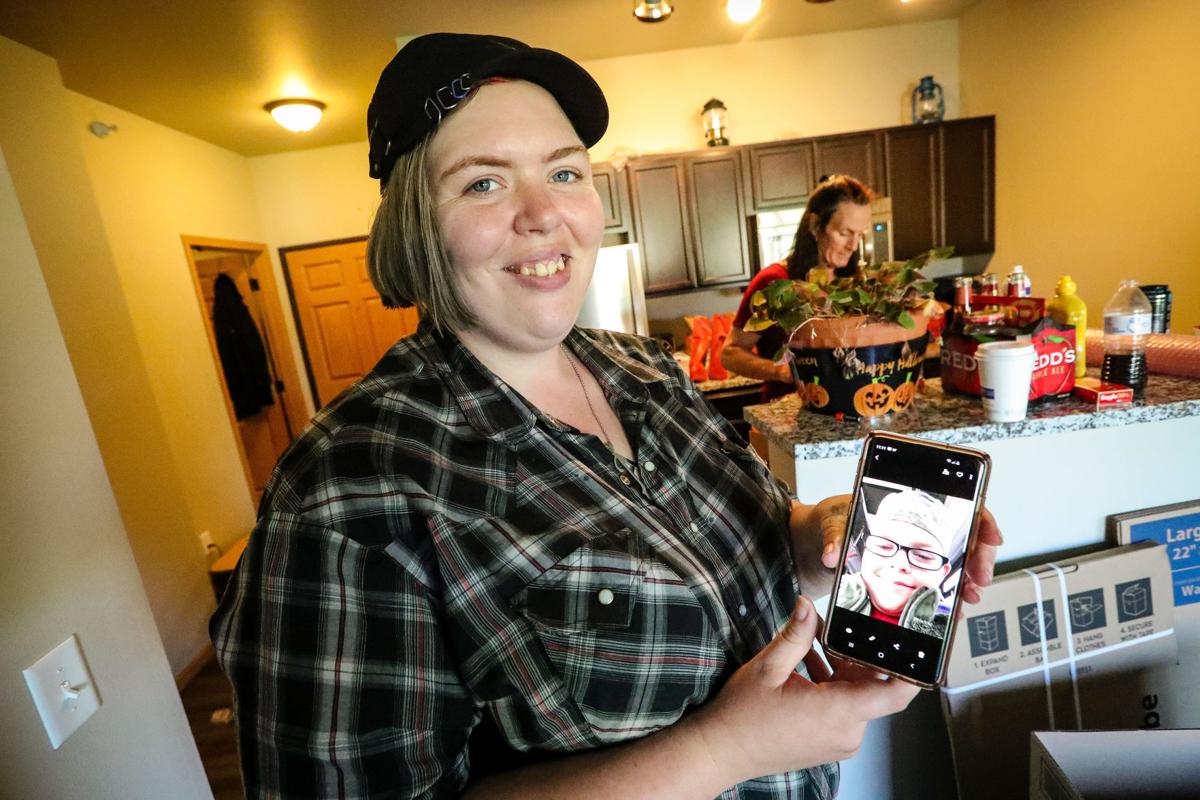 Amanda Hof-Tiernan shows a photo of her son Aiden while she and her wife Chrys Hof-Tiernan help Amanda's mother move out of her apartment in Rapid City on Thursday.

Amanda Hof-Tiernan said she had a good week after having spent a lot of time with her wife.

Others sitting with Hof-Tiernan in the jury box at the state court in Rapid City last Tuesday also had good weeks.

A smiling, energetic man said he'd been sober all week after staying away from bad influences. A woman sitting in handcuffs and a jail uniform said she was taking each week one at a time as she waited for an opening at a safe housing facility. Another woman said she had a nice week despite breaking a tooth since she spent time with her children. The crowd, including a serious-looking sheriff's deputy, applauded as the woman announced she's been sober for more than a year.

Other people, like Corbin Mudlin, said they were struggling.

I'm "overwhelmed" and "have so much on my plate," the 26-year-old Rapid City resident said. Mudlin said he's been stressed about moving his storage to a new unit.

A woman said she keeps forgetting things, like clocking out of work or showing up to appointments, while another woman cried as she said she's stressed about her transportation options, feels embarrassed about her mental illness and is having trouble controlling her emotions. "I feel really low," she said. Another woman teared up as she explained her grandmother was dying. A woman who had to be awakened when it was her turn to speak said her medicine was making her tired and she'd rather be sent to prison.

Defendants don't typically tell judges about their feelings or how their week went. And deputies and lawyers certainly don't applaud in court.

But Hof-Tiernan, Mudlin and 11 others weren't in a typical court. They're participants in South Dakota's first mental health court, a speciality court meant to provide treatment, avoid a prison sentence, and prevent recidivism for people who have a history of crime and serious mental illness.

The court is similar to South Dakota's DUI, drug and veterans courts, which are all aimed at helping people who would likely otherwise go to prison due to their criminal histories, said Lara Roetzel, a member of the mental health court team and chief deputy state's attorney in Pennington County.

"We're kind of the last possible resort," Roetzel said, stressing that the program isn't for first-time offenders who are eligible for pre-trial diversion programs. "These are people that wouldn't otherwise be successful and have not been otherwise successful" without this intensive program.

The mental health court began soon after the new year and is run by a team headed by coordinator/probation officer Tessia Johnston along with Connelly, Roetzel, a defense lawyer and representatives from the Rapid City Police Department, Pennington County Sheriff's Office and Behavioral Management System (BMS), which provides treatment to the participants.

Before launching the mental health court, Connelly said, he visited one in Memphis, Tenn., to study how it worked.

"It's a research-based scientific model that's proven to be successful," Roetzel said.

People join mental health court after pleading guilty to a crime or admitting a probation violation, Connelly said. The program involves four stages and takes at least a year to complete, according to the court manual. The team meets to discuss how to best support the participants before both groups meet together for weekly check-ins.

Requirements of the program include undergoing random drugs tests and staying sober, taking prescribed mental health medication, attending counseling, making goals, finding safe and stable housing, meeting with Johnston and finding a job or positive social activities, the manual says. Johnston and BMS staff deliver medication to participants, drive them to appointments, and call to check on them, Roetzel said.

Incentives for good behavior include moving up a stage — which involves receiving a medal — less frequent drug testing, attending fewer check-ins, bus passes and gift cards, the manual says. Sanctions for violating rules could mean curfews, house arrest, an increase in treatment, jail time, moving back a stage or eventually being kicked out of the program.

Speaking before court last Tuesday, Mudlin described himself as a "poster child to mental health disability since I was young."

When his ADD, ADHD and bipolar disorder isn't under control, Mudlin said, he hangs out with bad people and makes impulsive decisions. He said he recently pleaded guilty to marijuana wax possession after being convicted of a burglary crime.

Being in mental health court rather than prison means "being able to be part of the community," Mudlin said. "I think it would be better for people that want to change to stay outside of prison."

Mudlin said the the court is less adversarial. "You're more on a team than by yourself."

Hof-Tiernan proudly said she was the first person to sign up for mental health court. She said she joined after failing several drug tests while on probation for meth possession. During normal probation, Hof-Tiernan said, she did drug tests and infrequently met with a probation officer.

Hof-Tiernan said she used to use drugs to self-medicate her bipolar disorder and schizophrenia but is now using prescribed medication and attending therapy that teaches her how to communicate with others and handle difficult situations. "I don't plan on doing (drugs) anymore. I just don't feel like I need it anymore."

Connelly stressed that the mental health court is not meant to be a solution to a lack of treatment options in the state. "We're that part of the puzzle" for people who have a mental illness and history of crime, he said.

The court may serve as a model for future ones. Gov. Kristi Noem and David Gilbertson, chief justice of the South Dakota Supreme Court, have both asked the Legislature to fund a second mental health court in Sioux Falls. Gilbertson said that from February through June 2018, 13.5 percent of prisoners screened at Minnehaha County jail intake had a mental illness.

Amanda Hof-Tiernan shows a photo of her son Aiden while she and her wife Chrys Hof-Tiernan help Amanda's mother move out of her apartment in Rapid City on Thursday.