A judge said Wednesday that he weighed public safety and a Rapid City man’s need for mental health treatment before sentencing him to 50 years in prison for shooting 63 rounds at officers and the public during a four-hour standoff on New Year’s Day 2019.

The standoff was an “absolutely horrible event” and “by the grace of God” no one died from Jordan Wounded Face’s shooting, Judge Robert Gusinsky said at the Pennington County Court.

Everyone, including officers who were fired upon, agree that Wounded Face, 32, needs mental health treatment for his severe schizophrenia, Gusinsky said Wednesday afternoon at the end of the two-day sentencing hearing.

But Gusinsky said a psychiatrist said “treatment is not enough,” that Wounded Face also needs a stable environment where people help manage medicine, finances and other aspects of his life. The judge also said he’s not confident Wounded Face can be rehabilitated since he already completed or dropped out of several rounds of intensive mental health and substance abuse treatment.

Wounded Face was originally facing 239 years in prison after being charged with 25 crimes ranging from attempted first-degree murder to drug and firearm charges.

He faced 80 years in prison after pleading guilty but mentally ill in February to two counts of aggravated assault against law enforcement and two counts of firing at a motorcycle.

Gusinsky made his decision after listening to testimony and watching body camera footage from officers who responded to scene. He also heard from Wounded Face’s sister and mother, plus a psychiatrist who evaluated Wounded Face.

The Jan. 1, 2019 standoff began after Wounded Face’s mother asked for a welfare check on her son who was making loud noises. Wounded Face began firing his gun after Officer Santee Clemons asked to speak with him.

The Rapid City–Pennington County Special Response Team responded and locked down the 1200 block of Racine Street and evacuated neighboring homes. Wounded Face continued firing toward law enforcement, vehicles and stores across the street, hitting an urgent care and business. He came out after law enforcement threw gas cartridges inside his home.

The fact that the SRT was able to arrest Wounded Face without him, officers, deputies or civilians being injured or killed is a “true testament to the care and professionalism” of local law enforcement, Gusinsky said.

Wounded Face “does deserve to get help” but “that can’t be at the expense of the safety of the citizens in this community,” said prosecutor Stacy Wickre.

He made “very dangerous choices” during the standoff that didn’t have anything to do with his schizophrenia, Wickre said.

Wickre said the defense’s theory that Wounded Face was trying to die via suicide-by-cop doesn’t make sense because if that was the case, he would have eventually walked outside. Instead he hid inside his home so officers couldn’t shoot him.

Psychiatrist Stephen Manlove told prosecutor Kelsey Weber that it’s unclear if Wounded Face was having hallucinations during the standoff. Manlove said Wounded Face told police he wasn’t hearing voices but later told him that voices were telling him give up and die, not shoot the police. Weber said the fact that Wounded Face didn’t give up shows that he’s able to override his hallucinations.

Wickre said that while Wounded Face shot in all directions, “he was aiming” outside his house since no bullets were found inside. She said a bullet landed in an urgent care with people inside while Liberty Tax and Subway had to be evacuated after a bullet landed in their building. Weber said Wounded Face reloaded his gun seven times over the four hours.

Wickre said Clemens arrived to help Wounded Face but he ended up firing his gun. She said Clemens and other law enforcement gave emotional testimony on Tuesday about how they thought they might die that day and how they’re still impacted by the standoff. Officers testified about hearing the bullets fly past them and played body camera footage that showed how terrifying the situation was.

Wickre asked for a 65-year-sentence, saying Wounded Face “had a lot of opportunities” to get help in the past and can still receive treatment in prison.

Defense lawyer Ole Oleson said Wickre’s request is longer than the 43-year average sentence for Pennington County defendants who plead guilty to a homicide. Wickre responded that Wounded Face was originally charged with a similar crime — attempted murder — and those defendants had only harmed one person while Wounded Face threatened dozens.

Wickre added that Wounded Face’s own mother was afraid of him when she called the police, and that he had previously threatened his sister and brother.

Law enforcement officers attending the hearing declined to speak with the Journal about their experiences at the standoff.

Wounded Face was twice seriously assaulted in his past and has severe schizophrenia and substance abuse disorders, Manlove testified. Not getting treatment for schizophrenia is “torture” since it means people are hearing and seeing frightening and negative hallucinations.

“It’s really important that the system treat this person,” he said.

Defense lawyer Matthew Laidlaw told Gusinsky that sending his client to prison is taking a gamble between treatment and torture because under South Dakota law, the plea of guilty but mentally ill guarantees Wounded Face will receive a mental health evaluation but only “may” receive treatment.

“That’s a big may” and you have “no oversight” over the Department of Corrections, you just have to trust they’ll do the right thing, Laidlaw told Gusinsky.

The DOC could chose to send Wounded Face to HSC, Laidlaw said. But he pointed to testimony from Manlove who said he’s visited mentally ill people who deteriorated while in prison or were locked up in solitary instead of getting the care they need.

Laidlaw told the Journal that judges can’t mandate a defendant be treated at HSC if they’re sent to prison, they can only do so as part of a probation sentence.

So Laidlaw asked Gusinsky to sentence Wounded Face to probation with 25 years suspended so he could be treated at HSC but sent to prison for up to 25 years if he breaks any rules.

Gusinsky said he’s worried what would happen if HSC treated Wounded Face and said he’s stabilized within a week or other short period of time — something that’s happened in the past. Wounded Face’s family loves him but his needs are too much for them to handle, the judge added.

Laidlaw said Gusinsky can create a court-ordered discharge plan that involves making Wounded Face live in a group home after HSC — something that’s helped him in the past.

Chris Zahn, Wounded Face’s older sister who testified on Tuesday, told the Journal that she wants her brother to get help and that he needs to be supervised. She said she’s not sure how much treatment he would need before being able to safely return to the community.

Theresa Marks, Wounded Face’s mother, testified that her son grew up in Rapid City singing, dancing and drumming at powwows. She said he graduated from high school and attended some college but had to return home in 2009 after he began feeling “very paranoid” for the first time.

Marks, a health care professional, said she had Wounded Face evaluated immediately and he was treated at HSC. She said he did well at group homes where he was under supervision but would not take his medicine or go to therapy when he was at her home, where he lived for about 1.5 years before the standoff.

“I couldn’t control that,” she told Wickre.

Wounded Face, who appeared calm and hung his head down or to the side during most of the hearing, wrote a letter to the judge but did not speak.

Laidlaw said his client has expressed remorse for what he did to the officers, community and his family

An airman accused of murdering his infant son admitted during a 3.5-hour-long interview with Rapid City police officers to knowing it was wron… 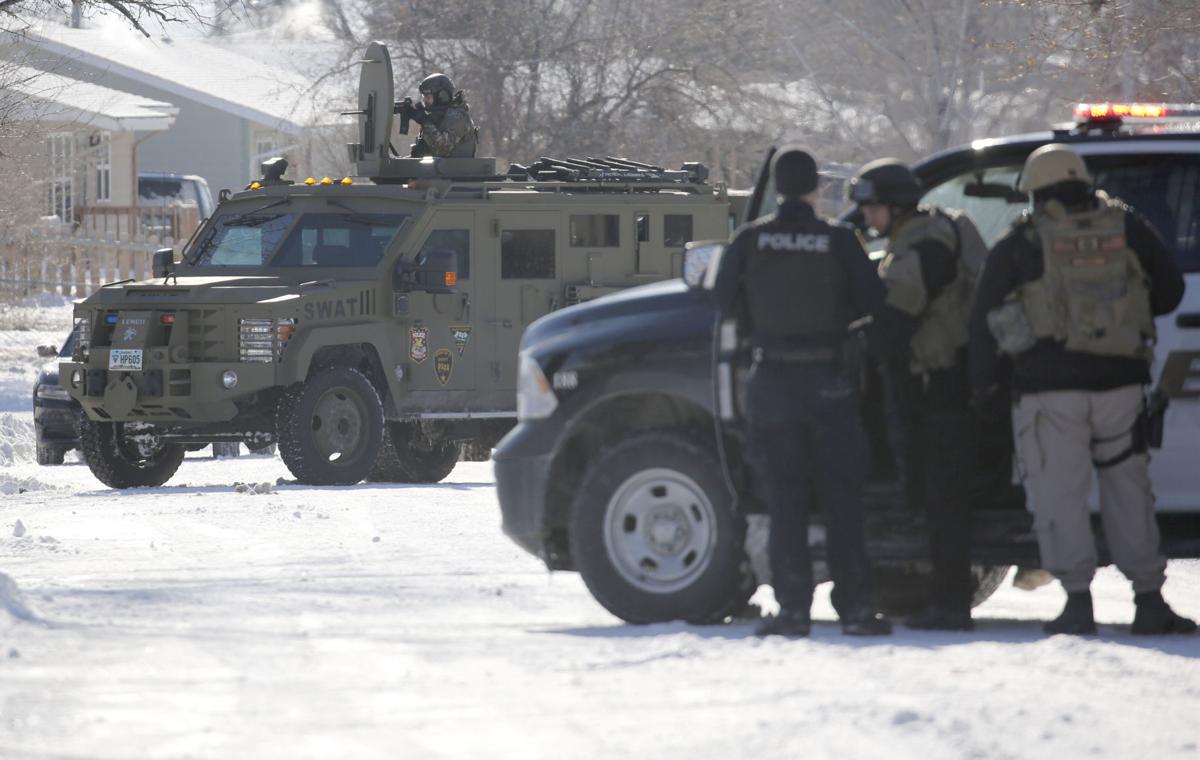 Members of the Rapid City–Pennington County Special Response Team respond to Jordan Wounded Face's home on Racine Street on Jan. 1, 2019, after he fired at officers, vehicles and stores. 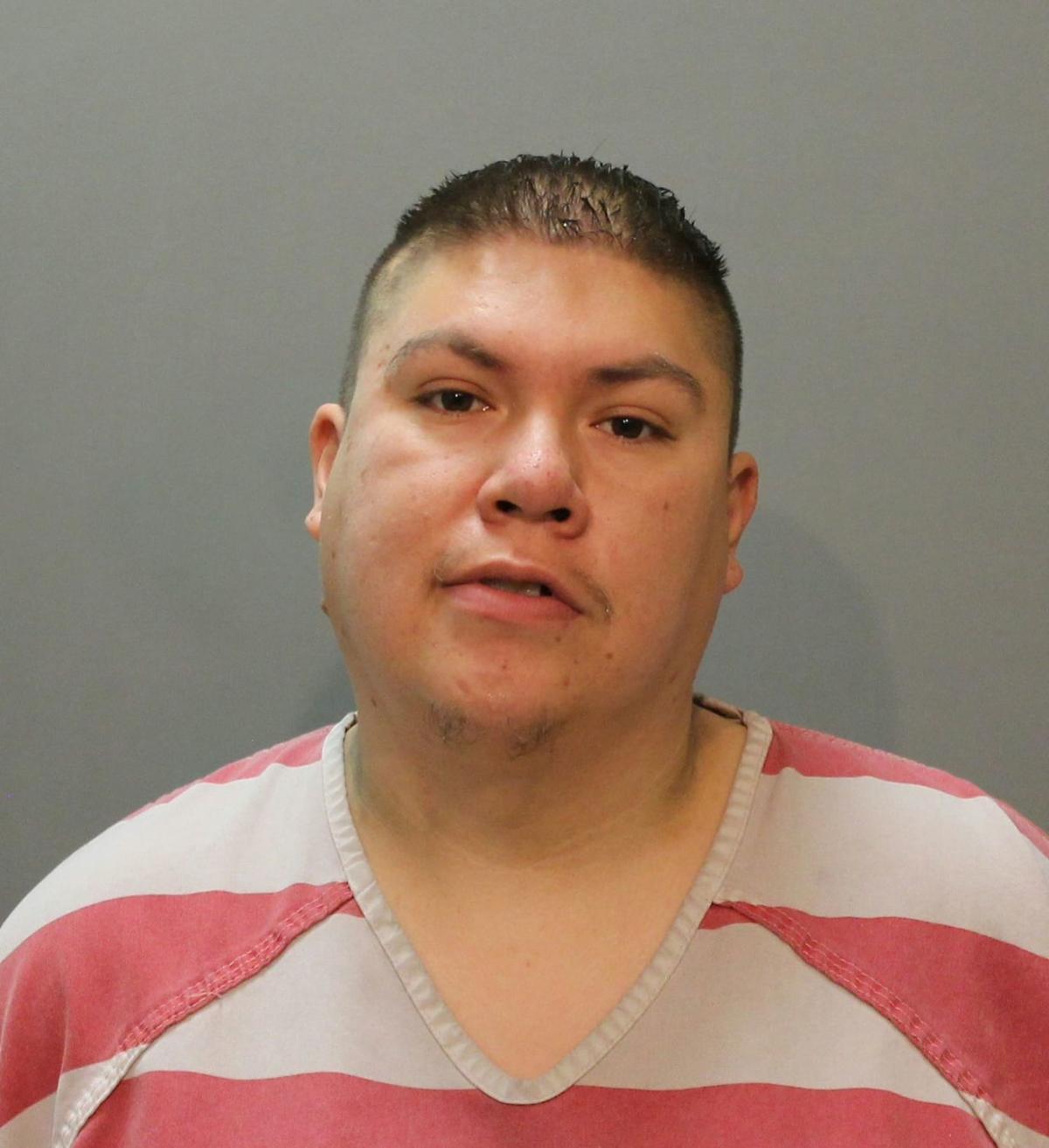